Stagecoach are Bettering Buses to Kettering [3]

One problem has faced buses running between Northampton and Kettering. And it is this:- 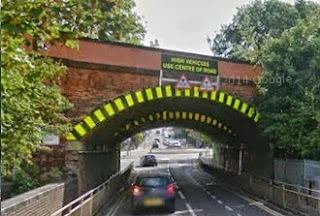 This is the Midland main line immediately north of Kettering station. The road has been lowered but double deck buses have generally be forced to take a significant diversion. 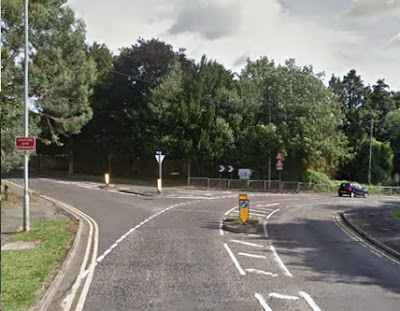 At this junction (offending bridge to the right) the route turns left and wiggles via Kettering Hospital ... 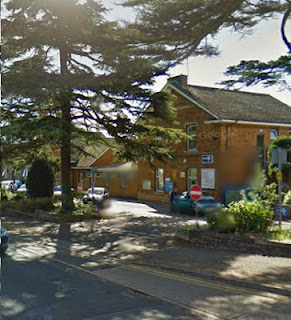 ... before turning back southbound to the town centre. 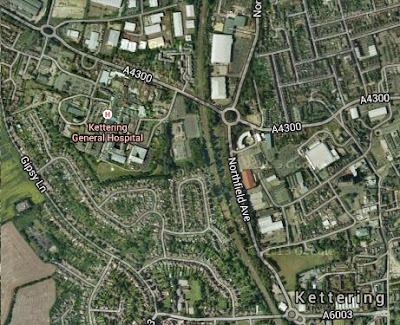 The low bridge is to the left of the (new) roundabout by the "K" of Kettering; Hospital upper right.

The bridge was a real problem and occasionally caught out visiting vehicles as here ... 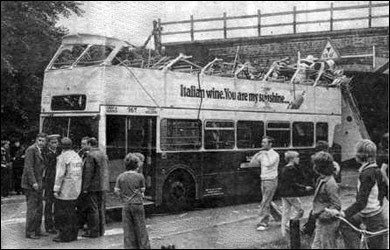 ... where 25 West Midlands children on a day trip to Wicksteed Park were injured.


So let's look at running times; with a reminder that the Gold X4 runs from Peterborough to Milton Keynes and follows a fast(er) route between Wellingborough and Northampton. 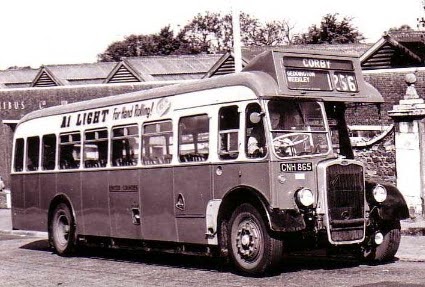 After the changes on November 2nd we have on offer

X4  via Wellingborough NO CHANGE - 60 minutes


For those not familiar with Northamptonshire's geography, Old is a village not a description of Stagecoach buses or an ancient bus route!

Not only is the X43 new and (slightly) faster between Northampton and Kettering, but it continues northwards to Market Harborough taking over from the former service 18. 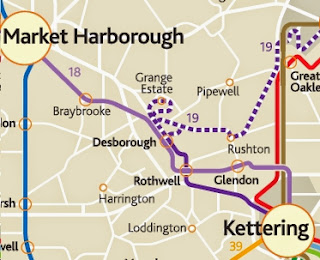 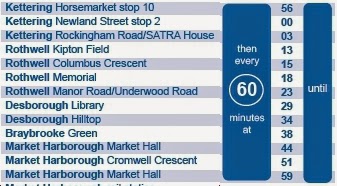 Here is a chunk of the new X43 timetable:- 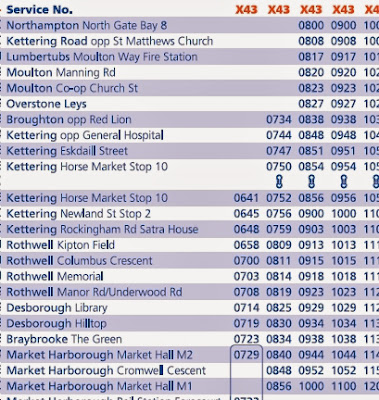 The Stagecoach leaflet is well laid out with 39 and X43 on offer including a full route map ... 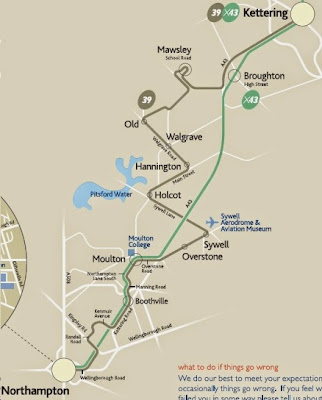 ... plus a selection of town maps; that for Kettering itself showing how far stops are now removed to the railway station. Integrated transport? No fear? 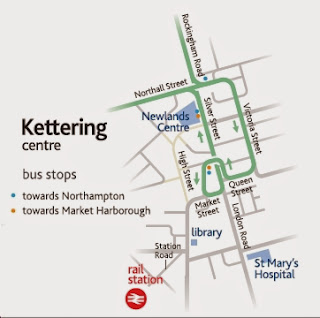 Stagecoach are generally good at providing information but what is available out in the sticks of Kettering? 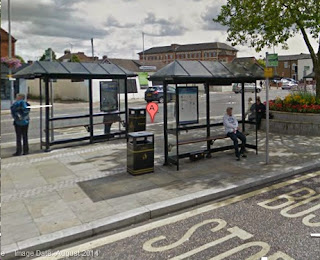 The other "coming together" of buses is at Eskdaill Street ... 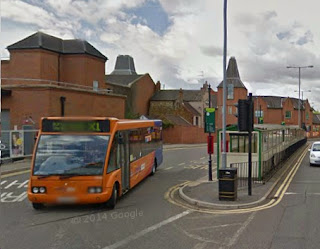 ... and round the corner at Newland Street. 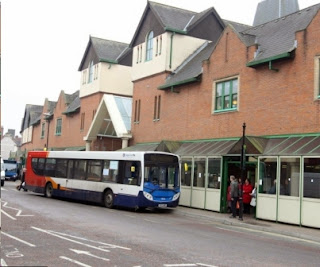 "You recall the splendid Public Transport Information display at Wellingborough Church Street. Well Kettering has two, one in Newland Street and another round the corner in Eskdaill Street. The signs match the generally run down appearance of the bus loading area, no wonder there are people out there who think only the poor and unwashed travel by bus." 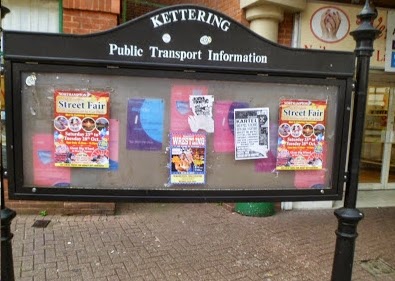 The Northampton Street Fair advertised was from 25th to 28th October. The blue and pink poster is for the Kettering Dayrider but the glass (plastic) is so dirty you can hardly read them. Eskdaill Street is similar ... 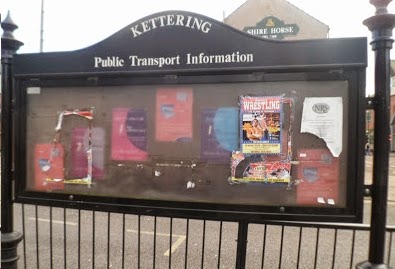 ... with the addition of a just visible 7 day ticket poster in purple and grey.

And what about printed timetables? Erm, what? Eh? You want a TIMETABLE? Hey, Bill, we've got a guy here who wants a bus timetable!

In common with the code of secrecy and despite large display frames in the shelters ... 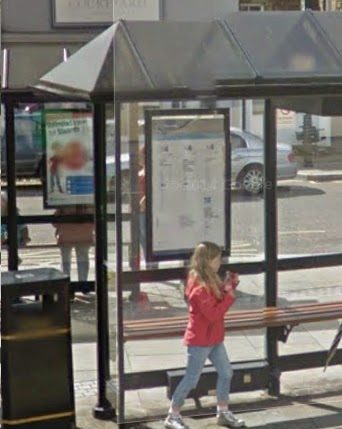 ... Stagecoach does not display any timetables anywhere the town. Departure lists, yes. Timetable, no. Route maps, no.

Alan did a tour, mystery shopper style, as follows:-

He searched for timetables in general and for the new X43 service specifically.

Northampton North Gate. Timetables for Services 39 and X43 on display.
Wellingborough Library seems to be the only source of printed timetables in the town and oh dear! Out of date timetables for W3 and 45 still displayed, nothing for 34, X46 and X47 and no train timetables.
Finedon library does not open on Monday or Tuesday so no chance of finding anything there,
Kettering's council offices have lots of lovely computers but no bus timetables.
They are across the car park at the Manor House Museum. There was a complete set of current Stagecoach timetables but nothing for the 34 or any rail information.
The café in Newland Street used to have them but not any more.

Alan further opines that he knows the area, he knows where to look BUT how would a visitor find any leaflets, with the notable exception of Northampton's bus station?

Of course, how stupid of visitors to Kettering. It is obvious that you get bus information from the town's museum. Bus passengers are just SO incompetent! 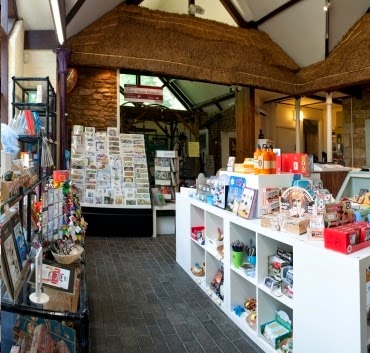 Is this really the (non) advert for their services that Stagecoach want? Printed material has sunk into the "it's all too much trouble and they can use the internet" philosophy. Some can, and do. Many, many more can, but don't. But the vast majority of bus passengers would not be able to access on-line information. Weirdly this represents the majority of today's bus users. What other industry would treat its largest tranche of customers with such contempt?

... suggested that fbb should try a third site offering to unravel the complexity of rail fares. A more detailed report on Splitticketing.com will follow on Saturday. At first glance it looks better. 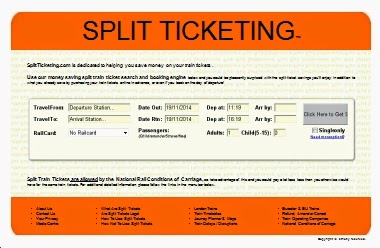 Next bus blog : Friday 21st November
Posted by fatbusbloke at 02:00