No 4 from December 1st

According to the ever-reliable Wikipedia ...


Services commenced at short notice on 9 October 2012 after Countryliner went into administration the day before and took over their West Sussex operations. The Directors of Sussex Bus also are directors of several other companies involved with public transportation, broadly under the banner "Heritage Coaches".

The history of Countryliner is tortuous in the extreme with a series of financial crises and hearings before the Traffic Commissioners ...

... but from the maelstrom emerged Sussex Bus. Its owners, in turn, faced a Traffic Commissioners' enquiry as reported in the local paper.

Issues were raised over the number 31 Sussex Bus route serving Bolnore, Haywards Heath, Uckfield and Heathfield, which was reported as running early, late or not at all on more than one occasion. There were also safety concerns over other buses. One had a cracked windscreen and a fuel tank leak, while another, believed to be a school bus operating in Burgess Hill, had been driven for about 200km with a faulty accelerator.

Reports also indicated that passengers were concerned about two frightening vehicle fires on buses in service, one near Pyecombe in March 2013 one on the A23 in September 2013. A third fire on a private hire vehicle occurred in October 2013.

Indaunted by these setbacks, the company started two Crawley Town services from 1st September this year under the branding "Crawley Reds".

These served estates to the west and south of the town centre, half hourly in each direction, in direct competition with Metrobus.

Metrobus service 1 runs from Bewbush and Gossops Green cross-town to Southgate and Broadfield. 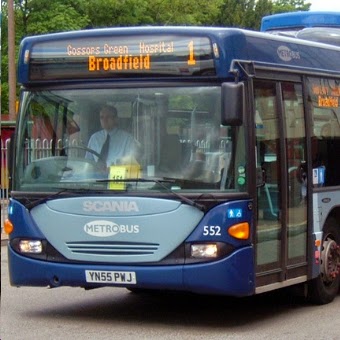 ... whereas Crawley Reds bring the usual crop of second-hand darts to their intended passengers. 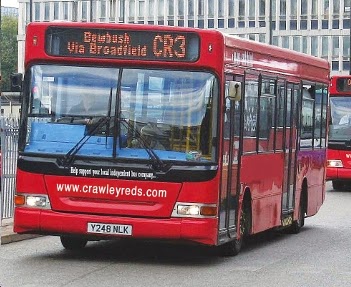 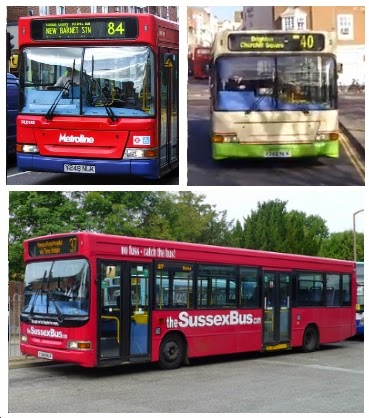 ... saw extensive service with Metroline before being sold to Ensign. It was bought by Countryliner and taken over by Sussex Bus before moving to Crawley.

Two changes to the Crawley Reds timetable happen from Monday December 1st. The CR1 and CR2 disappear and become absorbed into a new CR3 running every 15 minutes. Despite publicity which mentions CR4 it would appear that the route via Southgate and Broadfield is abandoned. 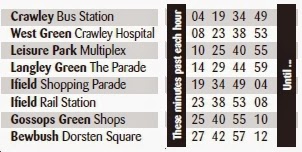 Also from that date a brand new route starts up. 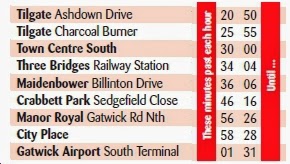 But how do fares compare?

Metrobus' fare on the 10, for example, is £2.20. Will Crawley folk be willing to sacrifice frequency for 20p? Doubtful. The 500 takes 31 minutes; the 10 a mere 19. Presumably the Arrow is excluded from the Fastway guided bus and bus priorities sections. 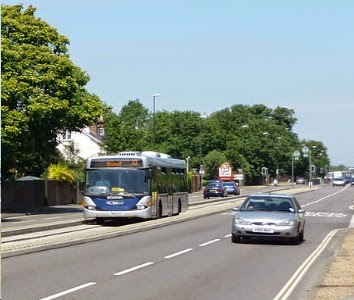 In view of the chequered history of this operation, you have to wonder what its chances of survival are? Sussex bus watchers report that they are not hopeful of a long term future. As usual, fbb will keep a watching brief.

Staff and unions have been given 100 days’ notice that if a buyer for the business is not found, then it will be closed. A proposed sale of the business around 18 months ago to French group RATP was not progressed. It is understood that the high amount of fleet replacement to meet the January 2015 deadline for full DDA compliance by buses under 7.5-tonnes was the stumbling block. Western Greyhound runs 21 Mercedes-Benz Varios. 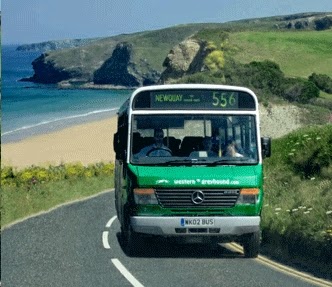 The decision comes after a period of poor operation over the summer, caused by severe staff shortages of drivers and fitters. Since then drivers have continued to leave, mainly for rival First Bus.

No real surprises; the article merely confirms he current position in a little more detail. 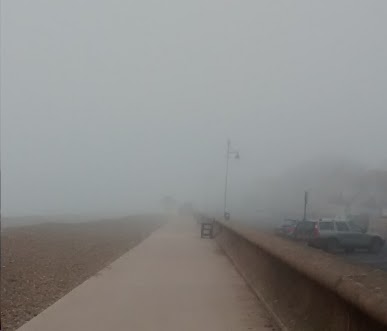