There at the top of the home page is what many Perth (Australia) people will be wanting to check out - namely the new Airport Line. But what comes up next on the graphic is even more helpful.

Also "front and centre" you get the considerable list of bus changes that have been made to integrate fully with the new train service. It would be tedious for fbb to explain them all and possibly well beyond the old man's pay grade! Suffices it to say that there are two network maps for the "greater" High Wycombe area; one for the more spread out eastern bits ... 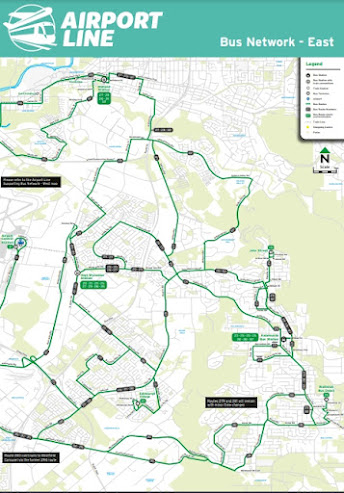 ... an one for the more closely packed areas including the three new stations. 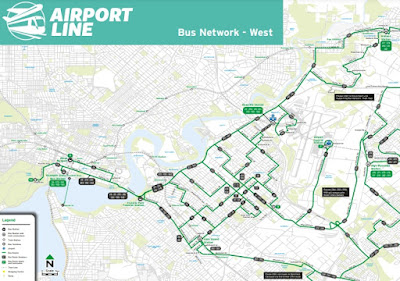 Of course our readers, unless residents or keen visitors to Pert will struggle with these, but just take a look at a more detailed extract. 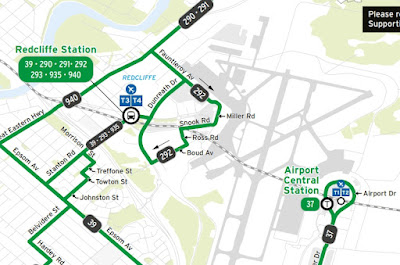 There is no colour coding by route or groui pm of routes, but the detail is easy to follow. Only one local bus serves the airport itself (37) ... 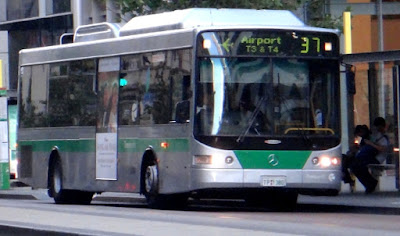 ... but the blue-blob T1. T2, T3 and T4 are intriguing. They refer to the FOUR terminals (three domestic, one international).
As well as car park shuttles ... 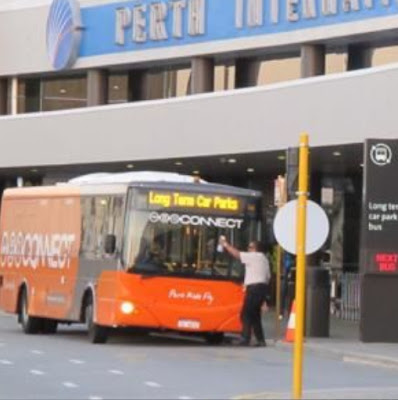 ... there are special buses to link the two terminal blocks which are on opposite sides of the main runway. 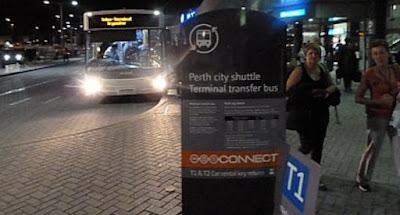 Transferring between terminals
There are two terminal precincts at Perth Airport that are separated by a short, 15-minute drive: the T1/T2 precinct and the T3/T4 precinct.
If you need to transfer between T1/T2 and T3/T4, taxi and rideshare services are available on the respective terminal forecourts.
The terminal transfer bus is also available and operates every 20 minutes between 06:00am and 22:00pm and every 30 minutes between 22:00pm and 06:00am.
The Ozzies don't seem to bother with the 24 hour clock!
... Printed As Well?
Back to the train. The web site provides a PDF of the train timetable for those who like to do their own thinking and planning, eschewing journey planners and the scrolling on-line timetable. Hopefully these are available in printed form.

There is, sadly, no network map to enhance the route specific information but a second version of the line diagram appears, tperhaps unnecessarily, inside.

The timetables are thorough using repeat patters for the standard 15 minute 7 days a week frequency. Trains run every 12 minutes at peak (it is a long peak!) and every 30 minutes at the extremes ends of the day.
For UK eyes the layout takes a few minutes to get used to as it is horizontal rather that the usual vertical table that fbb is used to. Every stop is timed as per th extract below.

At just 10 minutes for a ride to Perth central it will beat the traffic at any times of day. As wyll as the usual advertorial material, there is a useful diagram showing which platform you need for onward travel.

Two more snippets to investigate, then. What is "Perth Underground" and where or what is "Australind!?
And wht about fares? Shoukd we expect the usual rip-off "premium" fares to and from the airport?
Readers, please control your excitement. We will resolve these matters in tomorrow's blog.
But, it looks as if the new Airport Line is worthy of a "world-wide" chocolate peanut?
But Not In Sydney?
That's over on the east coast and a long way from Perth; 3935 kilometres or 2446 miles in the old money. Australia is, to use a technical term, big. 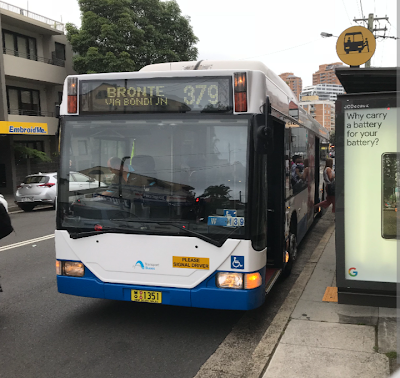 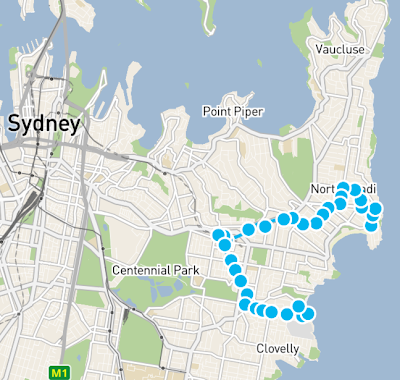 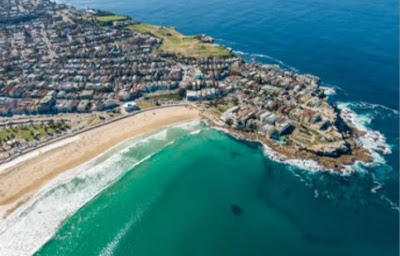 The route is local in that it does not go into central Sydney. 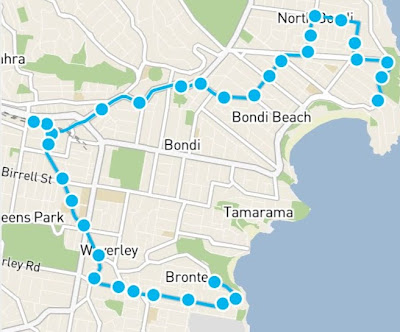 At North Bondi it has a little turning area shared with routes into Sydney itself ...

... with the silver sands and swelling surf just a short stroll away! 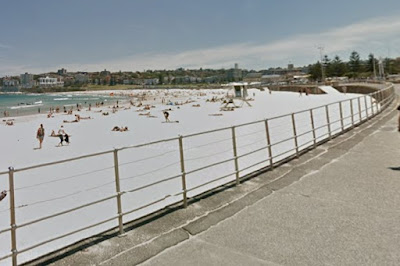 At Bronte, the 379 lays by in full view of the sunshine and sea! 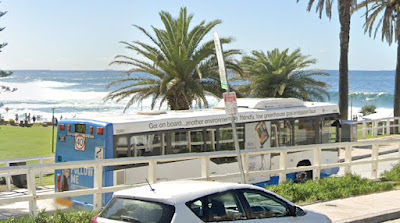 fbb doesn't do "hot" but it would all be lovely to look at before retreating to an air con hotel room. It is something of a contrast to an occasionally sunny Seaton.
Anyway, the 379 runs every 10 minutes as the PDF timetable on-line shows (extract only below!). 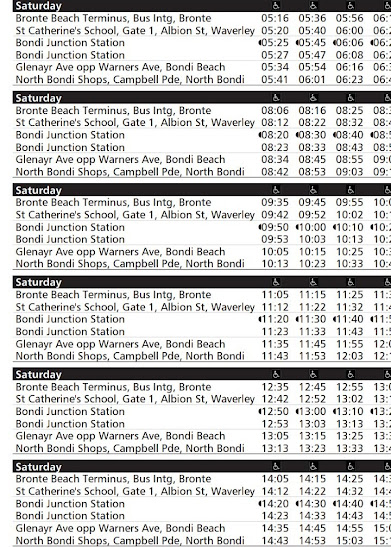 It was a twitterer whose twit intrigued fbb, especially after the item yesterday on Central Bedfordshire's appalling departure list!
Here are some shots of the information at a typical 379 bus stop. 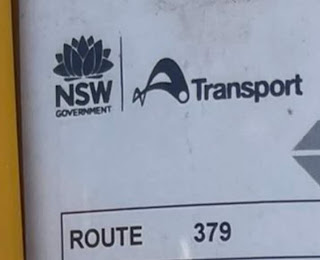 There are three columns of departure times, presumably for Monday to Friday, Saturday and Sunday. This is an extract from what appears to be the Saturday list, although there is no heading to confirm that. It was the  middle one. 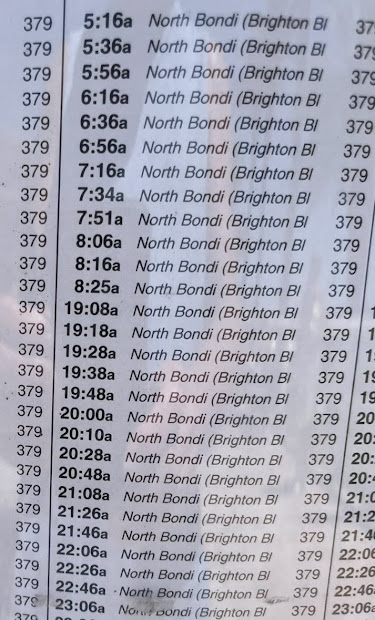 What's going on?
Well, in another frame beside the strange departure list all is revealed; or it isn't. 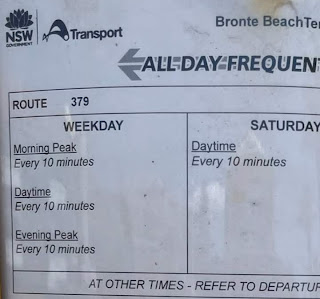 This suggests that there is a slight possibility. that buses run every 10 minutes and, aha, there it is, at other times refer to departure lists.
Well it makes a bit of sense, but what a messy and potentially confusing way to say it!
What is wrong with "and then every 10 minutes!?

And Now - Obscure Bus Models
After a plethora of one-off expensive BR loco models, we now have some less well remembered bus models from Rapido Trains. The company began its foray into bus models with the Birmingham half-cab "new look" Faimler (i.e. with tin front hiding he traditional radiator).
They followed this with the Birmingham  and WMPTE Fleetline ...

... with umpteen different route numbers and in umpteen different liveries. "Got to catch 'em all" as the kiddies used to say about Pokemons!
The latest Fleetlines come in the liveries of (mainly) disappeared independents. One is of particular9 interest to fbb, namely Andrews of Sheffield.

Andrews was a key player in the post deregulation competition shambles that engulfed Sheffield's much loved bus system and from which it never recovered! This decker is shown as competing on the busy (and presumably lucrative) 501 to Mesdowhall shopping paradise. 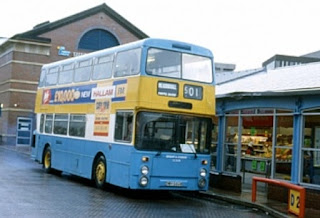 Rapido have priced it at £54.95 but, at that price, fbb will NOT be tempted!
Andrews, and its Ecclesfield depot, later fell into the hands of Stagecoach.