Exits and Excitements at Exeter 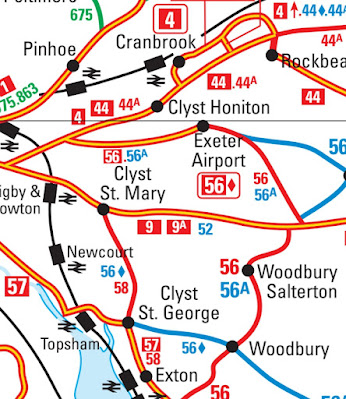 Rather than write depressingly about the current tsunamis of services cutbacks and withdrawals, fbb is selectively looking at what is being done to reverse or, at least, mitigate the service losses.

The big changes starting this coming weekend revolves round current Stagecoach routes 56 and 58.

Here is an extract from the timetable of the 56. The service runs hourly to the airport from St Davids Station in Exeter. It appears on the departure screens on the station platforms and is verbally announce over the loudspeaker system, After the airport the main daytime service continues via Woodbury Salterton to Exmouth. 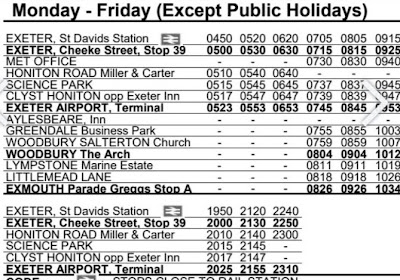 One journey each day tuns via Aylesbeare which fbb jas left off the map, stupidly; it is the blue line east from the airport. On Sundays the 56 runs from Exeter to Airport onlu.

A replacement service (fyon't laugh) is offered to the villages between Airport and Exmouth.

Little Aylesbeare does keep its one journey a day. 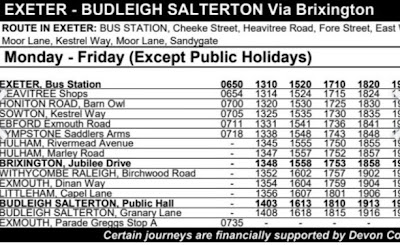 The 58 is hardly a wowser route, but it does serve several little backwaters and offers the main service to the Exmouth suburb of Hulham and a link from Exeter to Brixington without going through Exmouth. 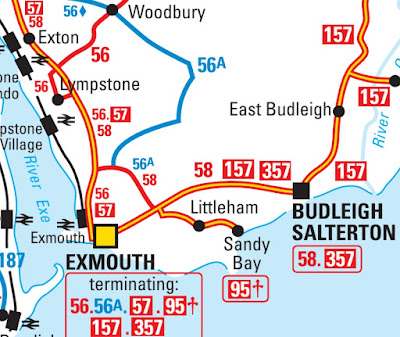 Maybe this is easier to follow on the excellent Devon timetable town map. 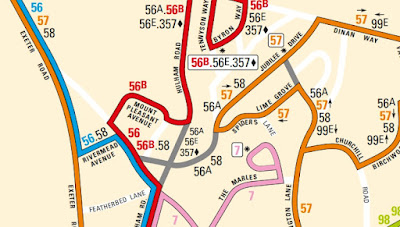 The service is reorganised, reduced and badly presented on the timetable. 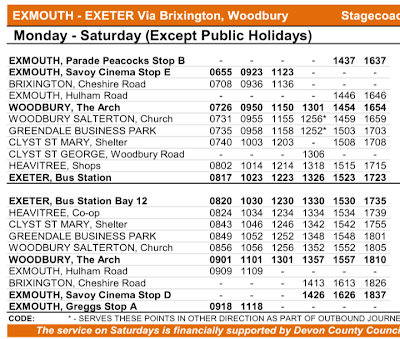 In fact, most buses do a "loop" via Brixington running Woodbury, Exmouth, Brixington, Woodbury in the morning and vice versa in the afternoon.

To cmpensate for this reduction and the withdrawal of the 56 ... 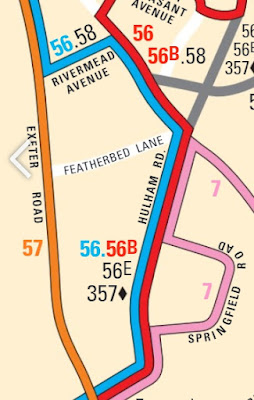 ... a new Exmouth local service (96) fills the gaps, including serving an estate in Lympstone. 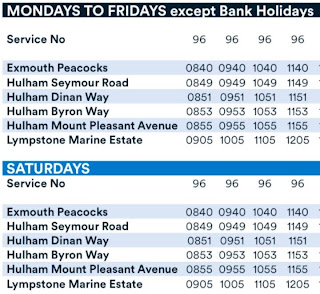 Not much good if you wanted to go to Exeter!

So what has happend to the service to the airport.

Weirdly amazing! It runs every 20 minutes instead of the hourly 56! 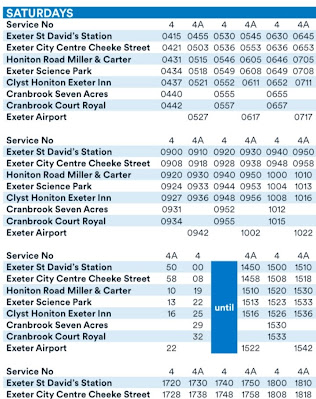 In an earlier blog, we saw that buses to Honiton and Axminster had been pruned as 44 and 44A and disconnected with service 4 to Cranbrook, the latter now a self-contained every 20 minutes/ This is shown on the area map extract at the head of this blog.
To this is now added a service 4A every 20 minutes to the airport! fbb can see no justification for such a lavish provision to an airport which has suffered badly, largely as a result of the Covid crisis. 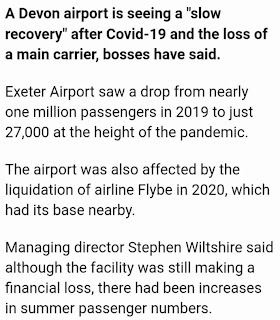 Correction to the BBC who pblished this snippet. Flybe's HQ was AT the airport and not "nearby". The recent loss was reported as "1,24 million. Yikes!

Service 4 and 4A now start fromn St Davids railway station and form a tten minute frequency replacement for the Honiton Road (RED) Park and Ride which is withdrawn. It is not clear whether the 4/4A buses will run into the P&R site or stop less conveniently on the main road.

There is one other oddity.

Stagecoach are running a "commuter" service between Pinhoe Station (trains by First Rail, bus sponsored by First) and the little used airport.

This shuttle also serves the growing Science Park area to the east of Exeter.

It is true that light industrial and office developments (also fbb's abortive attempts to get his cataracts removed) have burgeoned around th airport.,

Bui surely not enough to justify a bus every 20 minutes and an extra shuttle from Pinhoe.
fbb does wonder how long the 20 minte frequency on 4A will survive.
Watch this space!
From The Twittersphere 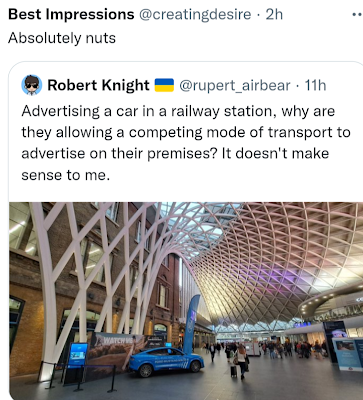 Likewise, it is strange to see adverts for cars on the side/back of buses! 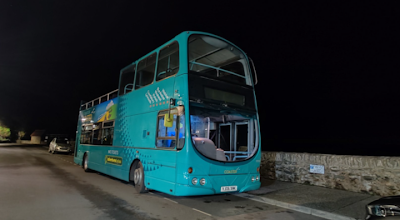 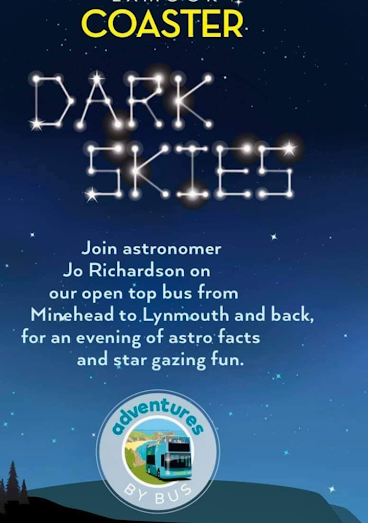