Internet connectivity at the Ardgarten Hotel is erratic and likely to be more so as coach parties return and all log on. it is possible that this blog may be less than ideal. 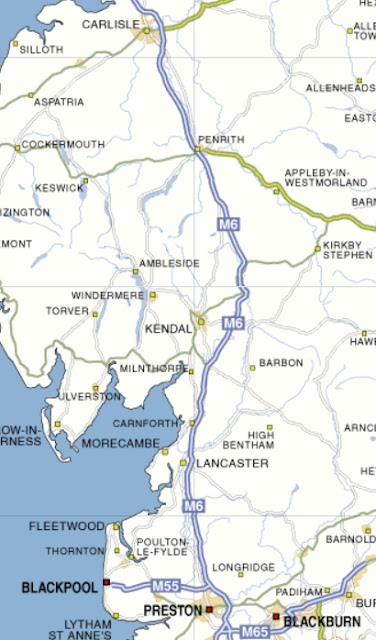 The route was M6 to Carlisle - where the M6 turns, like Cinderella's pumpkin, into the M74; and thence on to Glasgow. 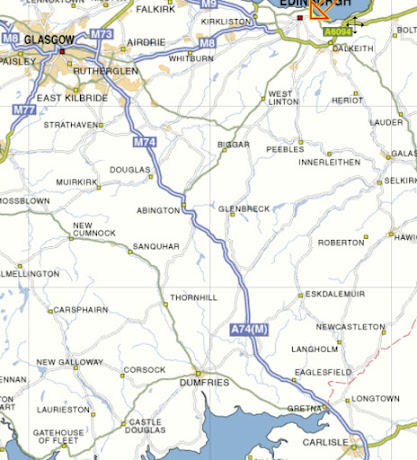 Again, a few quiz questions to enhance the virtual journey 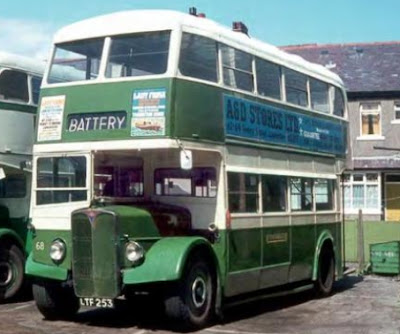 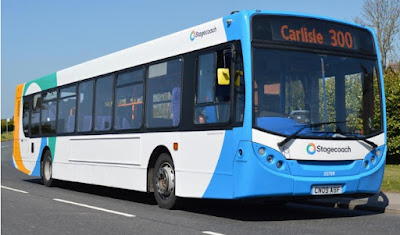 The fbb's coach sped northwards through the edges of the Lake District. In the glorious sunshine, the scenery was truly magnificent. 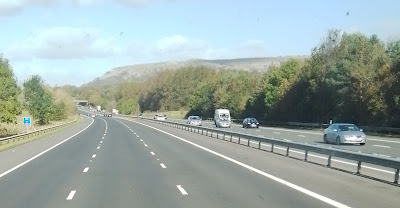 No lakes, just gorgeous fells (big hills!) which seemed to get biggeer ... 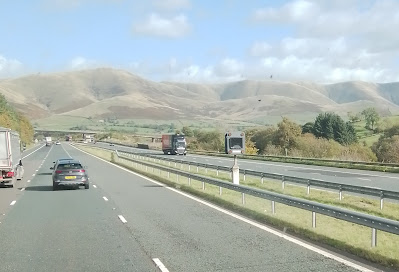 There was extra loom as a few ominous black clouds threatened to dampen fbb;s enthusiasm for the vast vistas ... 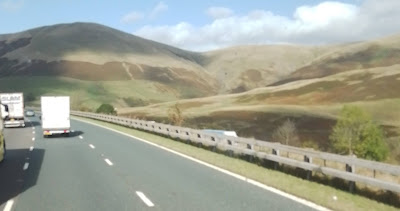 ... but no precipitation precipitated on the fbb's chauffeur driven limmo!

A stop was made for fuel. 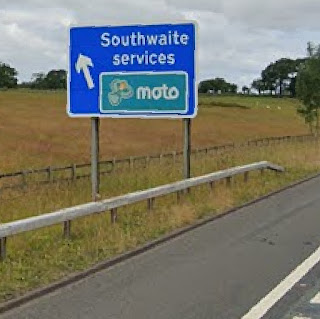 Fortunately a pump was available straight away ... 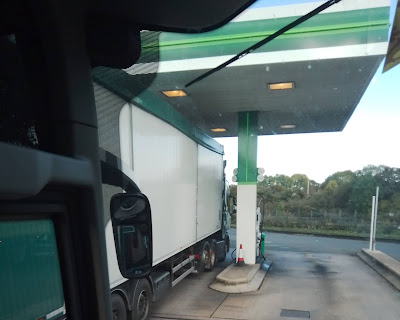 ... and filling commenced and was duly completed. 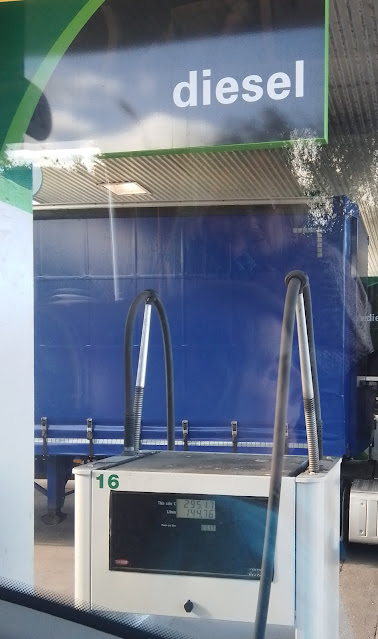 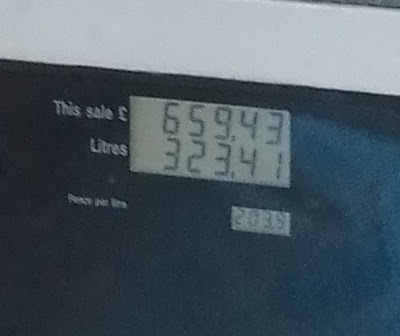 It is not at all surprising that many coach companies and package holiday providers are struggling and, in some cases, going out of business. Our driver was anxious to point ot that she carried a "Bunkering Card" (a debit card for fuel) and there was a significant discount on the pump price. Even so .... Yikes! 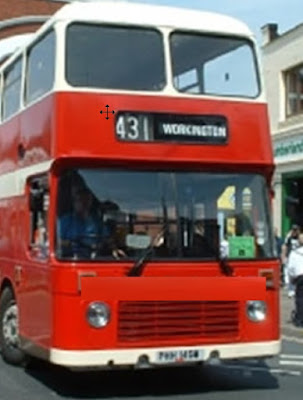 Which Carlisle-based company was bought by Stagecoach in the post-deregulation period? 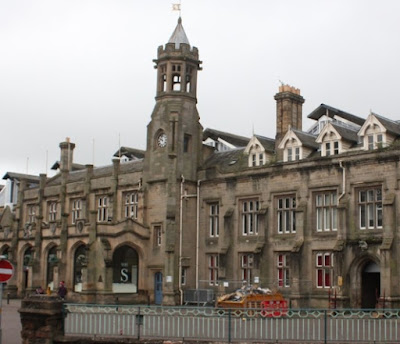 Carlisle station was built, owned and operated by a company created by all the railway operators using it for their trains. What was the station's full name?

Just north of Carlisle, our swish 6-wheelet passed the slip road for Gretna and Getna Green. 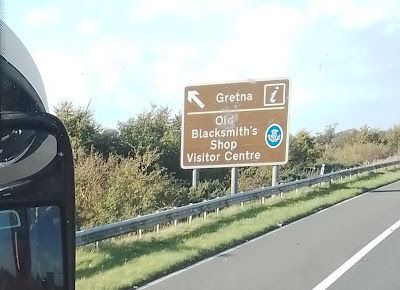 The latter is not a place that fbb would recommend despite its celebrated Blacksmith's premises. It is hugely commercialised and over provided with grot!

But the border is soon reached, and passed ... 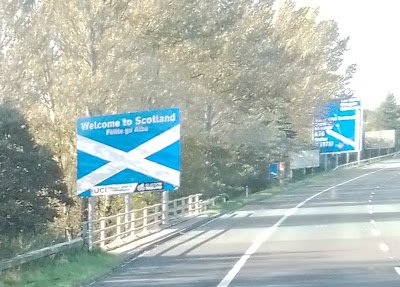 ... with no Customs inspection or the need to present a valid passport, a freedom which one slippery fish wants to change. Not a very attractive fish OR proposition? 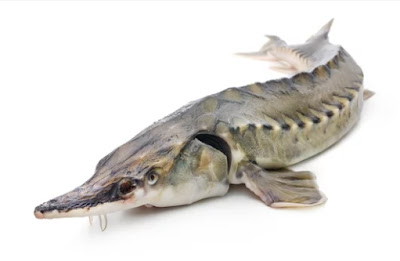 The scenery soon becomes hilly, but not as hilly as The Lakes. We have to wait a while for the real mountainous Scotland. But the aspect is still very joyous! 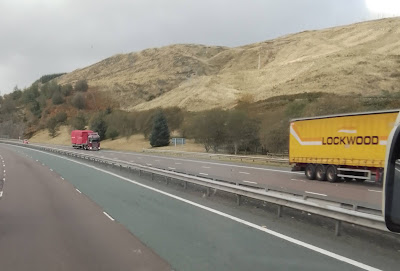 But clouds are looming more loomingly this time ... 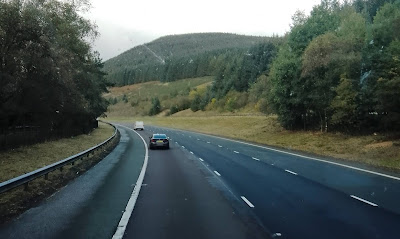 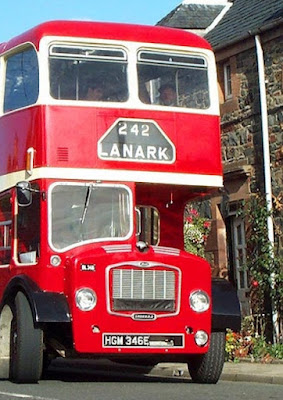 What was the name of the dominant bus company that served thee two close-together towns?

A few years ago, the M74 was finally completed in the Glasgow area. The idea wass that it would relieve the M73/M8 route through the city. We all know that building motorways attracts more traffic and so, instead of the M73 and M8 via the north of the city centre being clogged solid ... 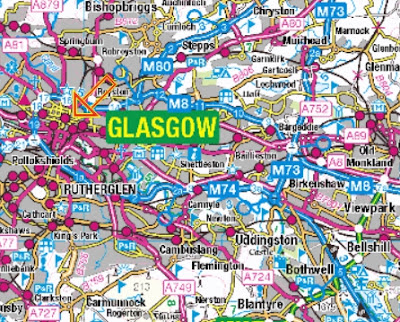 And guess who was passing through Glasgow's motorway network at peak hour on Monday 10th October. 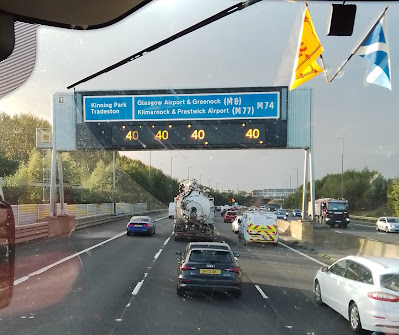 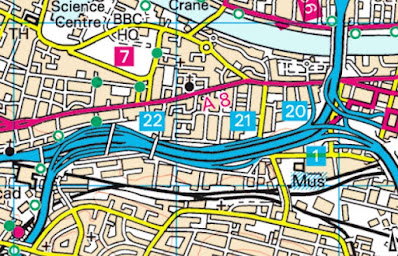 .... was utterly horrid. This picture below doesn't do justice to the cloggage. 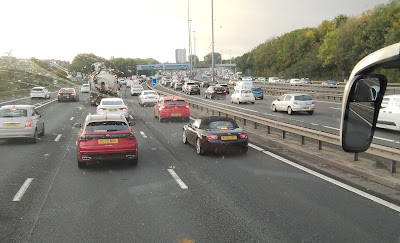 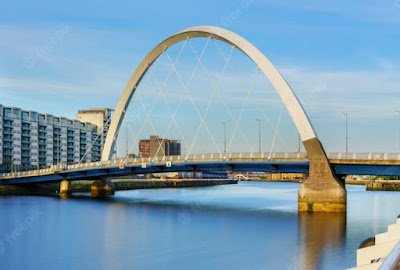 What is its official name - and what is the name that everybody in Glasgow uses?

Lochs and Glens eventually escaped the jam and proceeded over the Erskine Bridge ... 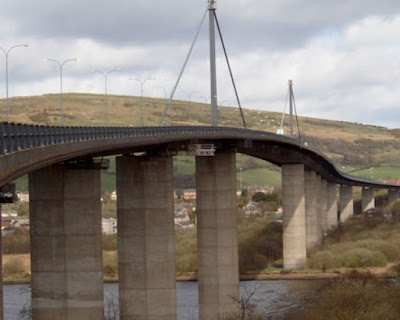 ... and on via the bonny bonny banks of Loch Lomond then to Arrochar ... 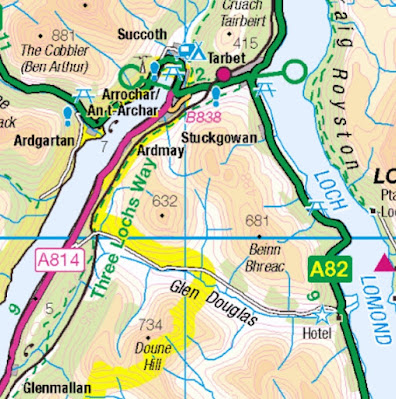 ... And the spectacular baronial Ardgarten Hotel on the shore of Loch Long. 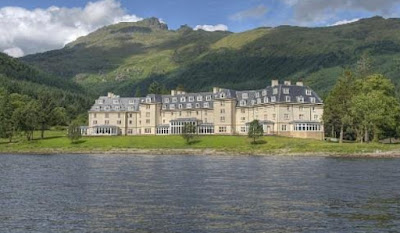 Tomorrow fbb will take a look round the gaff itself, and we will join the elderly twosome on their first trip out!