Buses and Metro in Rennes are run by Keolis, an operator that we meet many times "en France".

Based in Paris, France, the company is 70% owned by SNCF and 30% owned by the Caisse de dépôt et placement du Québec.

Yes, it IS a bit of a Government carve-up, but the system does ensure that the good burghers if Rennes get a stable network designed, not by spotty youths sitting at laptops, but by local people - or at least their elected representatives.

fbb could not discover what the acronym STAR meant, but it will be something like "Suoerbes Transports A Rennes".

The six "C" routes are entitles "Chronobus" and appear to be the main city bus routes operating on a high frequency (at least every 10 minutes) Monday to Friday.

fbb's one-time boss at Southern Vectis, one Stuart Linn, used to reckon he could understand a town's bus network by standing on the principal street corner for just an hour and watching the buses go by. fbb suspects that he also needed a map and a timetable book or a fistful of leaflets. On the basis of his observation (plus the rest?) he reckoned he could (a) design a good network and (b) save the operator some cash!

His networks did not always come up to his expectations (remember route 0 - that is zero - in Portsmouth?) but he did usually get it right.

fbb hopes that a virtual ride on Rennes C1 will help his readers get a feel for the city and its bus service. 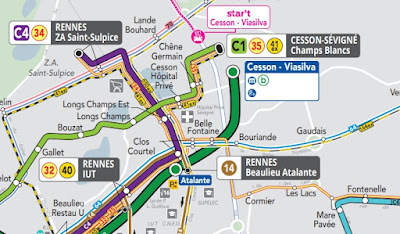 We join our artic bus at Cesson-Sevigne Champs Blancs. 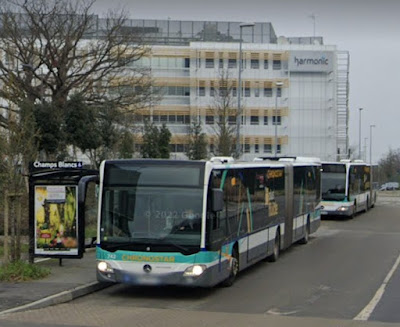 ... noting that all bus stops have shelters which are clearly labelled with the stop name. 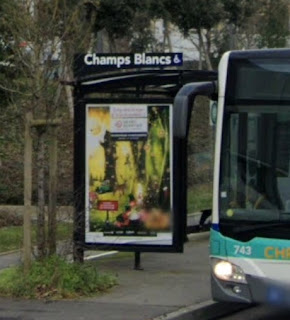 fbb could not espy any "real time" displays at the stops.
At Cesson-Sevigne there are large anonymous blocks of apartments or offices, clearly not very old. We set off through much greenery ... 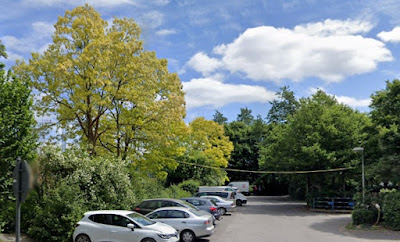 ... which hides more blocks all with their ample car parking well away from the road. We begin to spot little knots of actual private homes. 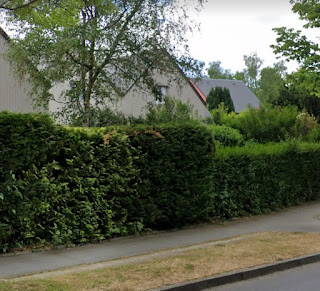 In the greenery area we are not far from the new line "b" terminus (yes the Metro lines do use lower case letters) which is on a viaduct, barely complete when Streetview was doing its stuff.

From here the line continues up in the air .. 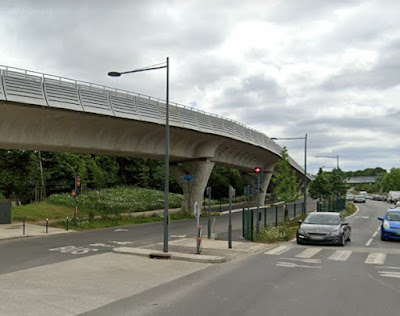 ... and remains above ground for a mile or so, before plunging down below ... 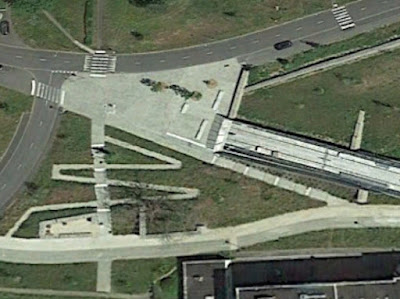 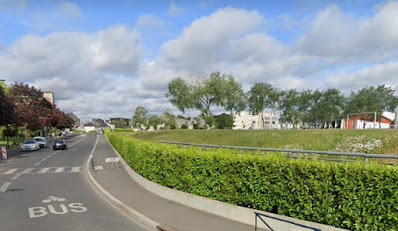 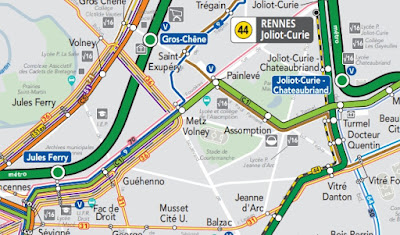 The Lycee, effectively, has its own Metro station!

Out Chronostar begins to move in to more recognisable suburbia ... 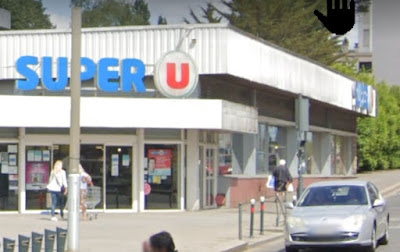 ... where "U" is a supermarket brand, not the underground Metro!
We are now approaching the city centre, but as we do, fbb cannot help noticing how clean and tidy everything is ... 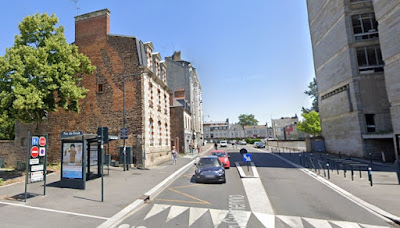 ... even where the ambience is not particularly beautiful.
We are soon approaching the centre of the city ... 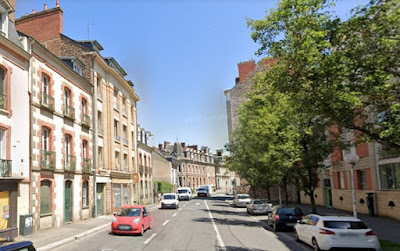 ... where the main interchange for local buses is Place de la Republique. 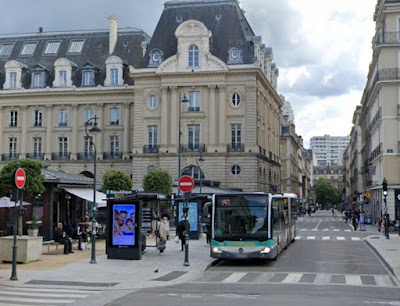 After next passing the railway station, which we saw yesterday in a little disarray c/o an non-updated Streetview, the route is relatively uninspiring along a busy suburban artery. Again there is a tidy if slightly disarming mix of the old ... 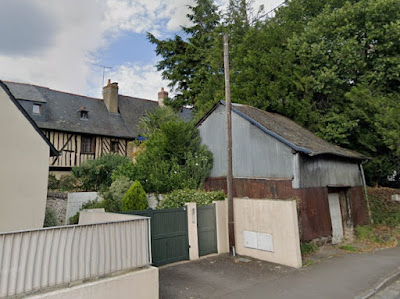 --- and just opposite, the obviously new! 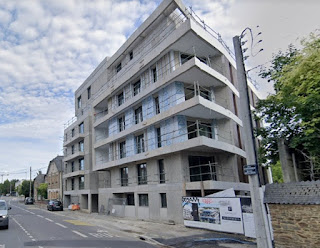 Our C1 largely misses the historic bits in the centre of Rennes. But, as we travel south east, it is still all clean and tidy. 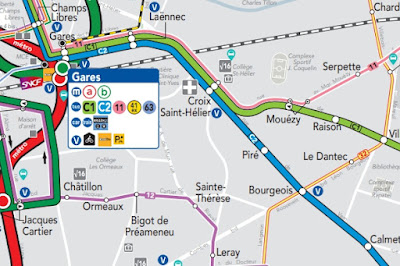 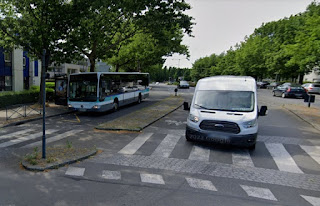 ... which terminates in its own protected layby a few yards away from the C1. The map shows a name "Carsat" ... 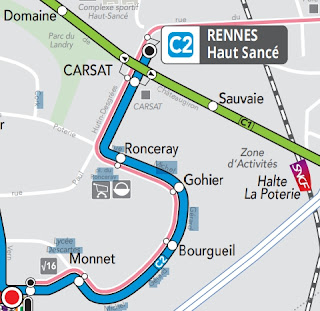 ... which refers, not to a modern district or an ancient settlement, but to a business located at the crossroads. 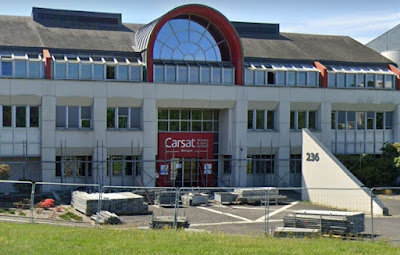 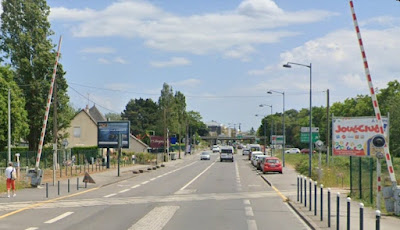 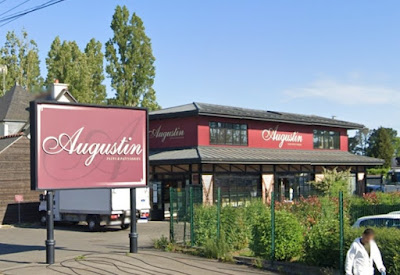 ... a local branch with bakery and caff. Soon after essential refreshments (?) our C1 veers off the main road and into yet another chunk of newer housing to terminate at Place Rosa Parks. 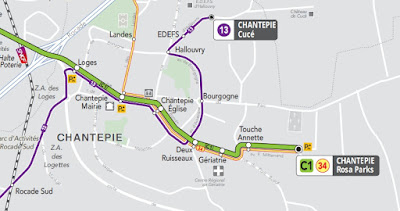 Next to its turning loop ... 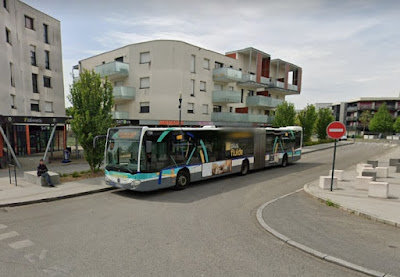 ... there's a bakery and caff there as well. Yummy. 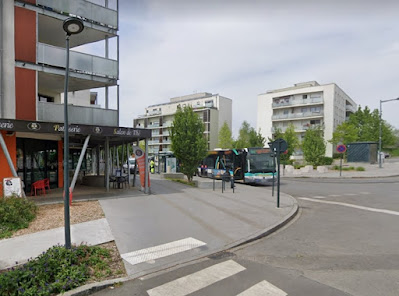 So we do get an overview of one of the six Chonostar Routes ... 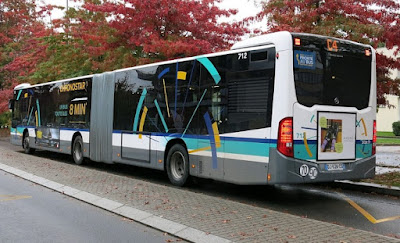 ... and, please note, SOME of the buses DO carry route branding, but without using e.g. the route colour as used on the map. 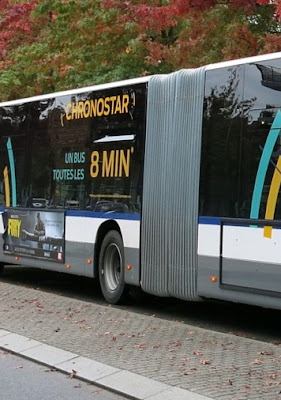 Tomorrow it's all about timetables and non-Chronostar routes!
Metro coming soon!
Next Rennes blog : Thursday 6th October
Posted by fatbusbloke at 02:00