It Is SUPERBLY All On Line

Stimulated, no doubt, by fbb's virtual ride on the C1 in yesterday's blog, Correspondent Andrew was so excited that h went straight to the STAR web site. His excitement was such that he sent fbb an immediate response.

All fbb has to do is to confirm Andrew's appreciation with just a few examples. 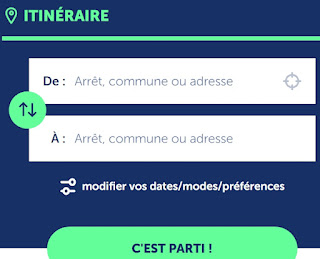 The important things, journey planner (above) and access to timetables (below) ... 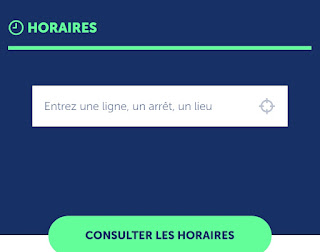 ... are right at the very top of the first page of the web site. There is no advertorial clutter; what you need is what you get - straight away. So many UK sites hide the useful information well away from the headline pages. After all the companies wouldn't telly want you to USE their buses, would they?
The first item under the "timetable" heading is a search by route number for the times NOW. Useful if you know what you want.
Then we have the timetable sections proper. 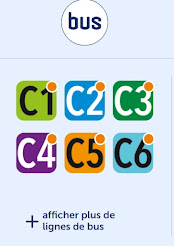 The initial display lists all the main services starting with the Cs which we met yesterday. Then come the slightly (with the emphasis on the "slightly") less frequent city routes ... 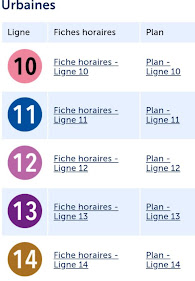 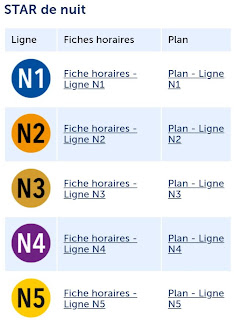 ... followed by services which connect the suburbs but do not enter the city centre. 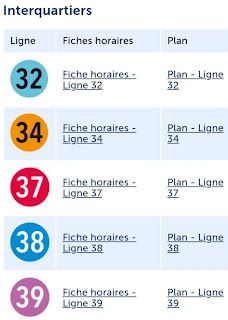 And there is yet more! Here is just part of a long list of routes which serve the outer suburbs and the surrounding communities, all part of "greater" Rennes. 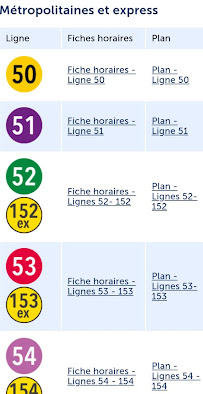 And there is yet more! Roues numbered in the two hundred series are school buses, presumabky available to the general public. 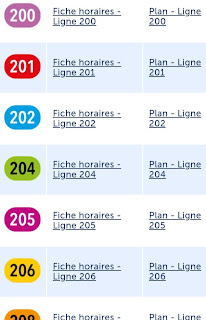 And there is even more! Would our readers like to see a full list of every route operated under the generic "STAR" brand?
Of course they woud! 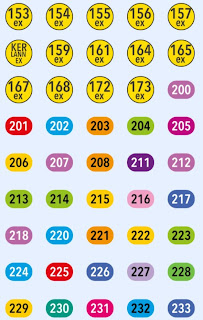 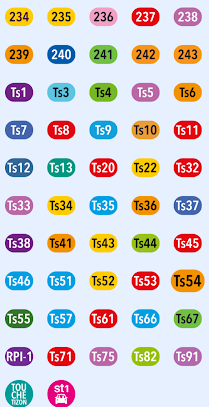 Now here comes the very thick icing on a particularly tasty slice of chocolate cake filled to bursting with fresh whipped double cream!
Every one of these coloured blobs is "clickable" and every one of them (with just a couple of very minor exceptions) links to a TIMETABLE and a ROUTE MAP, the latter showing EVERY STOP and connections with other services all along the route.
As Andrew says (above), "WOW!!!"
Those who keep a passing eye on French urban transport would expect to see such lavishness for frequent city routes as a matter of course - but for school services???
Just for the challenge fbb tried  Ts66  whatever it might be. And there, in full colour, is the route map ... 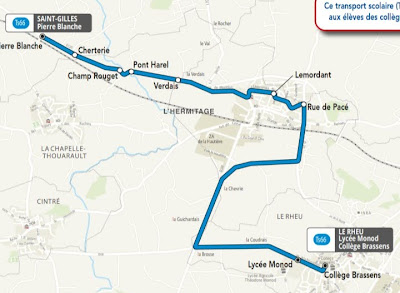 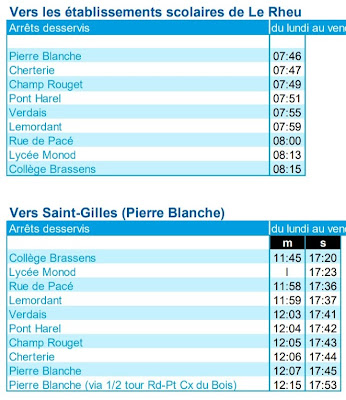 Note that, in La Belle France, schools close on Wednesday afternoons ("m" for Mercredi) so all school buses then run at lunchtime. Also note that the 0815 start is fairly standard.
There is also a list (of which this is part) ... 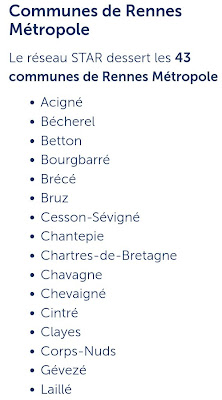 ... whch clicks on to PDF files of timetable booklets for communities that surround the city area of Rennes. 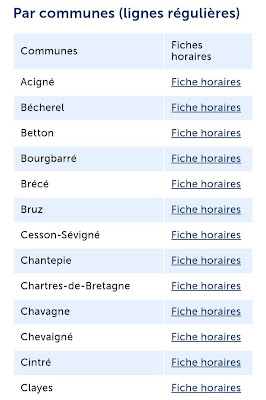 We can look briefly at Cesson-Sevinge when we began our virtual C1 ride yesterday. 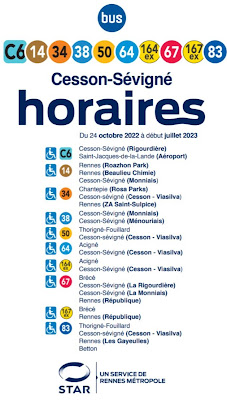 For a simple area booklet, we have a detailed index ... 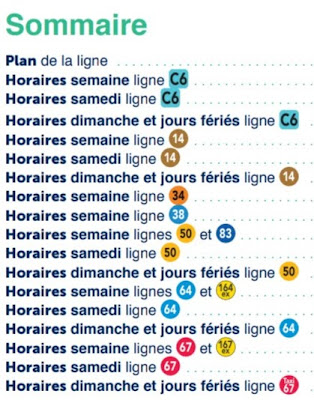 ... thus the timetables are all there IN FULL! There is even an extract from the full network map, slightly reconfigured to show everything that is indexed. Sorry it is sideways - but you get the idea! 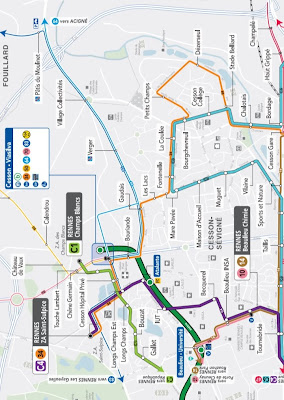 Now fbb cannot be certain how much of this obviously printable material is actually available in print. But there are plentiful agencies and sales points for the STAR network and you would expect printed information in those sales points and, no doubt, in local government offices in the outer communities.
There is, frankly, nothing like this in the UK.
One factor which makes it possible is that it will be a stable network, so the repeated changes, reorganisations and cutbacks of the UK's "commercial system" will simpLy not apply.
Without a doubt, we are in a highly subsidised environment. This is confirmed by the fares structure which we will dabble with tomorrow, plyys, of course, the Metro.
It is also worth noting that there are timetable changes in Rennes from 24th October.
It is no surprise that full timetables, compete with their associated maps are available NOW and have been for some weeks.
IT REALLY PUTS UK BUS TO SHAME!!!!
Today's blog is slightly curtail due to a series of minor domestic happenings which resulted in the clock beating the compiler!
Contrast And Compare
Publicity for the timetable changes from 2nd and 3rd October has, this week, begun to appear on the buses. This was spotted earlier this week on a service X78 Sheffield Rotherham Doncaster. Not quite up to Rennes standard, eh? 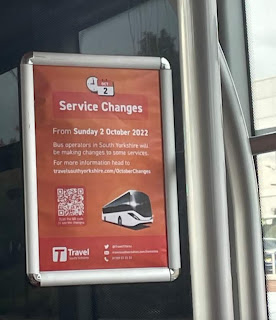 Terraforming
Thanks to some strips of one of Mts fbb's old bedspreads ... 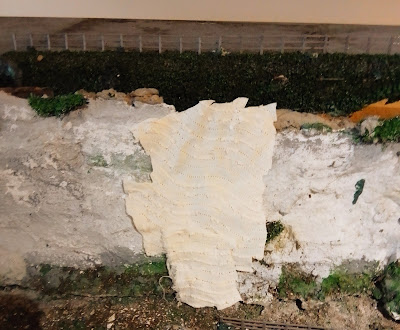 ... soaked in a squidgy mess of Tetrion (other fillers are available!), the cracked Peterville Quarry rock face is at least cosmetically repaired. 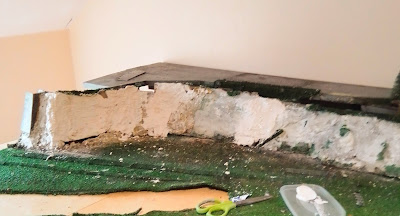 More structural support within the murky depths of the tunnel is still to be added.
Next Rennes of blog : Fri 7th October
Posted by fatbusbloke at 02:00