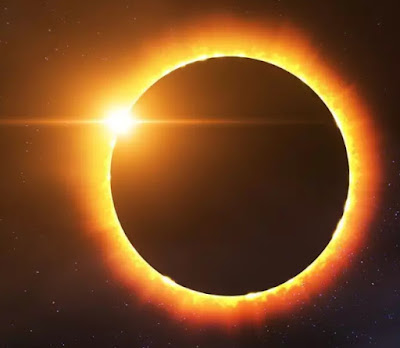 No, not THAT Eclipse, THIS Eclipse!
It has been going since 2012 and now has new buses. 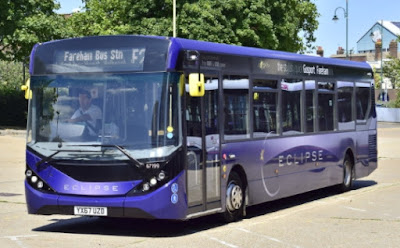 Essentially the busway uses the former branch line between Fareham and Gosport ... 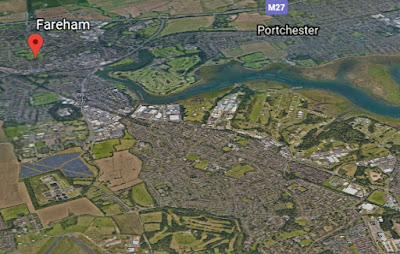 ... seen here as the line of greenery running from upper left to bottom right. It is called, pompously, The South East Hampshire Bus Rapid Transit as it was (maybe still is) part of a much grander plan for "rapid" (?) bus travel in the Portsmouth area.

fbb was a little non-plussed to read reports of excellent progress on the completion of Phase 1 - which fbb though was complete and in use and has been thus for nine years. But that was a wrong impression.

Pase 1 (Part 1) ended here, on the outskirts of Gosport. 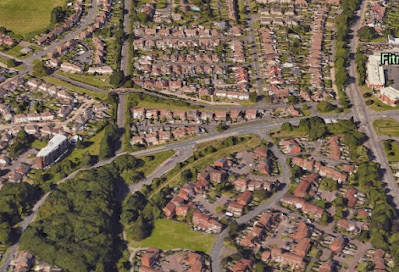 At Tichbourne Road buses to Fareham leave the normal carriageway and descend to join the former branch line, OR, as below, ascend to leave it! 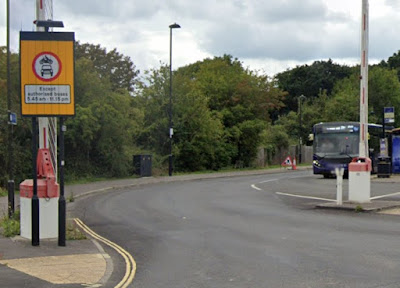 It is not a guided busway, just a buses only road - and as such has to have all the legal signs and markings. 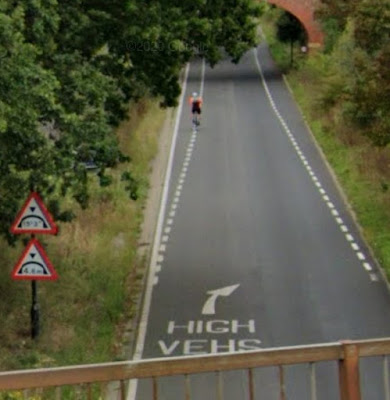 But Tichbourne Road is some way out of the flesh-pits of Gosport; so after whizzing speedily from Fareham Station, Eclipse has to join the throng of normality and hold-ups before it pulls into Gosport Bus Station. 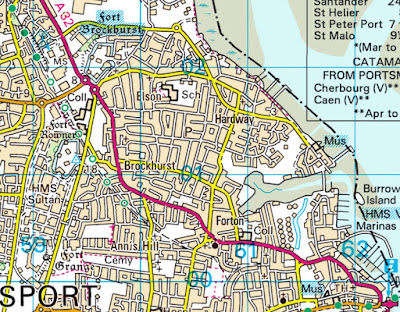 The busway starts/ends at the green dot in the top left hand corner and Gosport bus station is the red symbol in the bottom right hand corner.

Wouldn't it ve absolutely lovely if the busway ran all the way. Surely the railway ran closer to the town centre? fbb will look at that question in tomorrow's blog, but for the moment needs to focus on the exciting completion of Phase 1 - nine years after fbb thought that Phase 1 was complete.

Phase 1 (Part 2) will take the busway a further 1 kilometre (ish) from Tichbourne Way to Rowner Road. 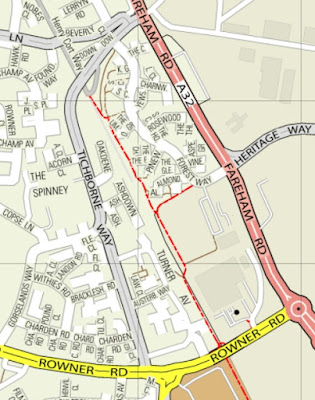 Currently a footpath and cycleway, work is progressing apace. 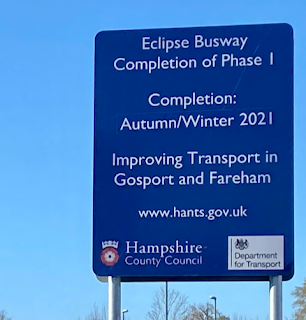 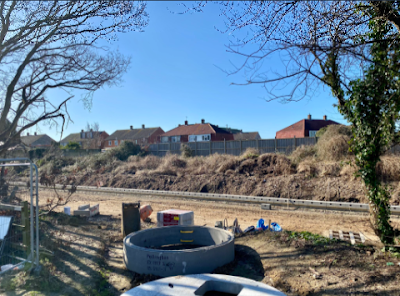 ... and there are services, drainage and bus stop access to deal with. 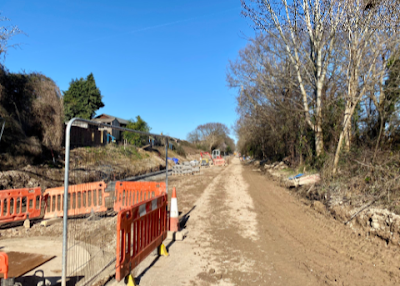 The new end/start will be here, on Rowner Road ... 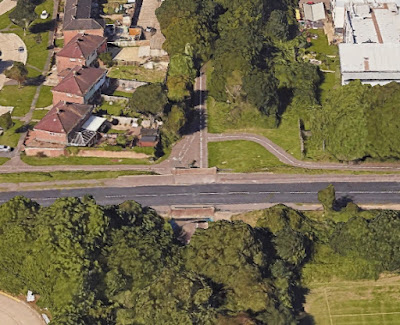 ... where there is currently access to the footpath and cycleway further into town (through trees bottom centre) and back towards Fareham. There is much work here, of course, to make a new junction with Rowner Road. 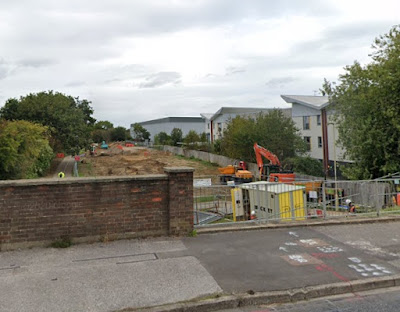 Again, quite a big job! The busway will veer slightly to the right as viewed above ... 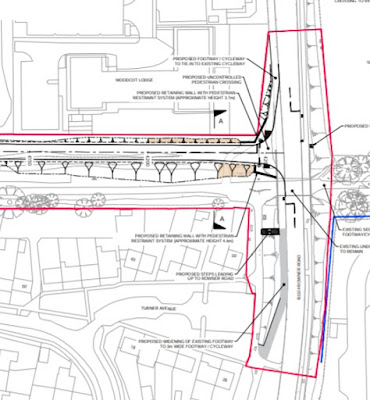 ... then climb a ramp to get to the level of Rowner Road, which runs top right to bottom right on the plans above. The footpath and cycleway will continue under the bridge.

That will complete Phase 1. It seems, from the amount of work needed, that Phase 2 is a longer term aspiration.

How will the new road section affect the Eclipse routes? 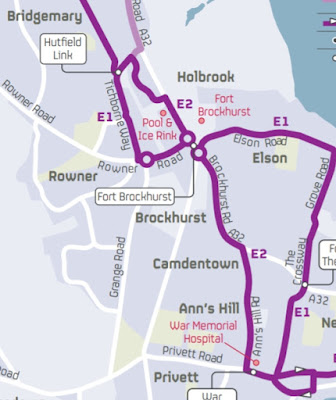 Currently, E1 runs via Tichbourne Way itself, close to and parallel with the new bit of busway. 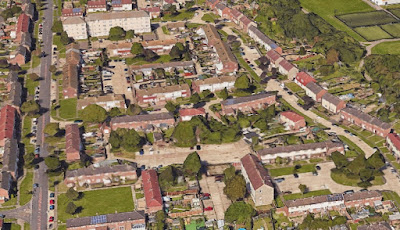 Will it stay there?
The E2 has a mini wiggle via Forest Way built between the Phase 1 Part 2 busway and the main A32. Will it stay there?
Or will BOTH run via the new construction?
Whilst pondering these weighty matters, fbb will, tomorrow, move on to a ticketing development and an investigation into possibilities for Phase 2 - doubtless long term possibilities given the  extended construction period of Phase 1.
Farewell To First? 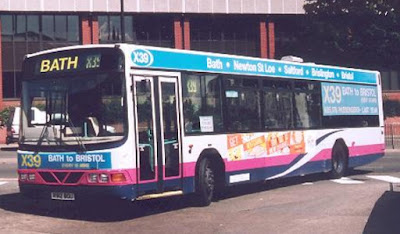 fbb was never a fan of Barbie livery - too bland; and it did not sit well with partial route branding.
The Barbie scheme for clapped out buses ... 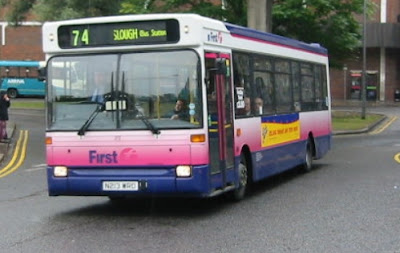 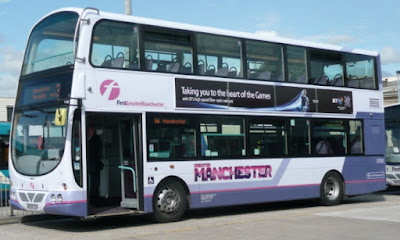 Slowly but surely corporate blandness has been giving way to colour and quality; "Creating Desire" we might say.
Let's hope that the post-Fearnley clutch of new managers will not revert to a nationwide paint scheme "to emphasise First's striving for corporate quality and go-getting policies for the 21st Century". (YUK!) The bus is, at its heart, a LOCAL product and needs to reflect that in all its marketing.
The latest "local" brand comes to First at Weymouth - the feeble remainder of the once-great Southern National. 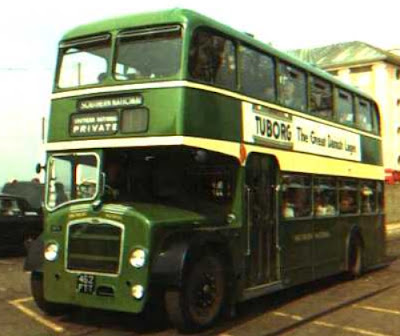 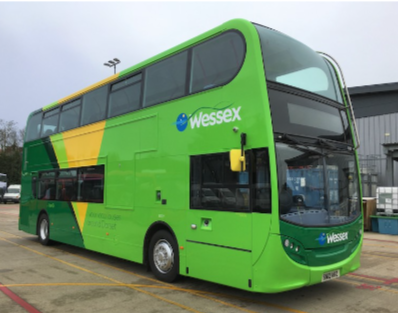 It has hints of Tilling green and  cream, plus a super splodge of not quite privatised SN green. 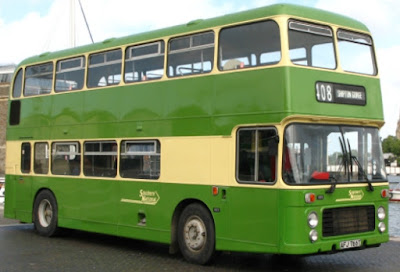 But it is near enough.
Nice touch, First!
More Eclipse blog : Tuesday 2nd March
Posted by fatbusbloke at 02:00