There are four versions of the W30 timetable (IT'S ALL ON LINE - but different!) the most reliable of which should be that published by the company that operates the route. They really ought to know when and where their own buses are going. So to save themselves all the fag of putting their own timetable on the interwebnet, Red Rose use that from Intalink, Hertfordshire in a skin. 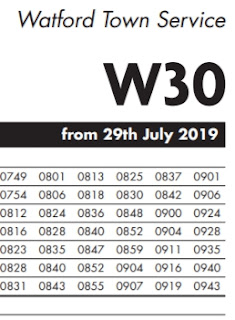 Sadly it is the wrong timetable, about 18 months out of date. So using that data gives us a dilemma. Will Red Rose be running buses as above or as shown in the other information provided? Will the hapless passenger miss their bus?
Dunno!
So next we turn to Intalink itself, once one of the best sources of information in the UK. To confuse us (perhaps) Intalink offer an HTML table on the website with the option of choosing a PDF version as well.
The HTML version starts badly.

Note that NONE of the evening journeys start from Watford Junction Station, apparently, which might be sad if you were, for example, an evening cleaner in the offices, or even if you fancied a quick early evening shop at Morrisons. Mystery?
For reasons unexplained, the 1434 does not serve Croxley Park Building 5 which, you will of course remember, is the time point on the new bit of the Industrial area. 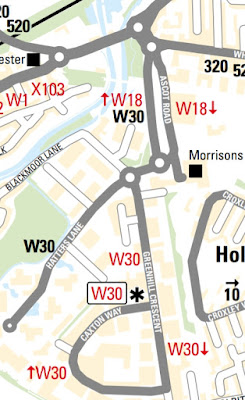 Mystery?
Of course, the local Watford map does not mention Building 5, but blog readers (whose memories for detail are legendary) will remember that Building 5 is at the roundabout at the end of Hatters Lane.
Intalink's PDF timetable, dated for January (red nosed Red Rose please note) ... 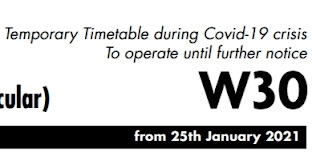 ... seems to have sorted out the first two journeys.

But the evening peak service is still a muddle. 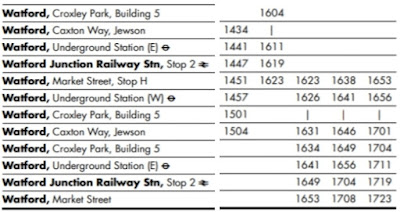 The 1604 from Building 5 is in the wrong place and there are no departures from Watford Junction although there is a suitable "line" on the table to include them. You would imagine that the 1623 arrival and the 1623 departure at Market Street represent the same bus.
Traveline cannot cope ...

... making you walk one stop to Beechen Grove where the W30 leaves one minute after Market Street having reversed all the way to get there - see a map. It's nonsense!
Such are the joys of computer generated data rather than using the more reliable one of these:- 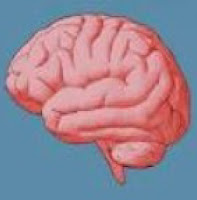 Is it really helpful to call everything Watford just because the over-engineered NaPTAN (National Public Transport Access Nodes i.e. stops list) tell you so to do?
But what, fbb hears you cry, about Traveline?

Two misplaced journeys this time - ah, that's because somebody has put arrival AND departure times into the database and the idiot computer cannot even understand that the times are the same! So the journeys will not fit in the correct place. Does nobody ever look at this rubbish presentation and stop it happening?
Once again it is weird when the daytime service turns into the evening peak journeys. 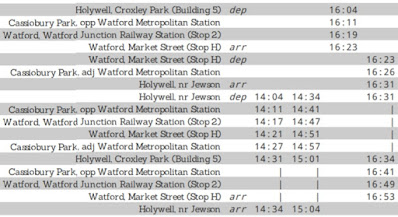 The computer seems to have created some totally unnecessary lines and gaps. Blog readers can amuse themselves filling the gaps!
Note also that, instead of Intalink's "all Watford" daftness we now have Traveline's even dafter policy of using geographical district names even if they are potty. 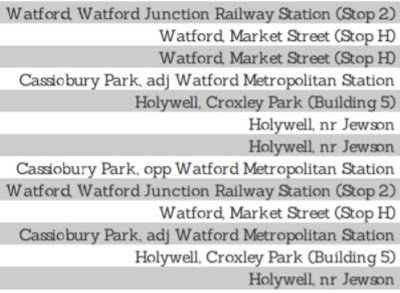 It is just about acceptable but totally unnecessary to locate Watford Met station at "Cassiobury Park" ... 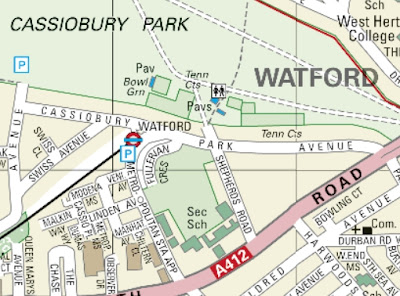 ... but it is a complete nonsense to reject the names for the Industrial Estates and use generic "Holywell" when there is no physical link between the two locations, except a creepy footpath! 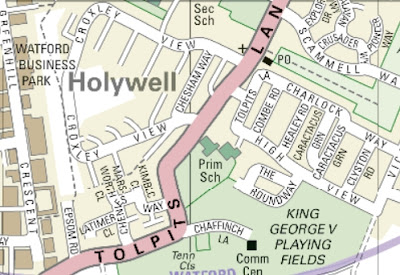 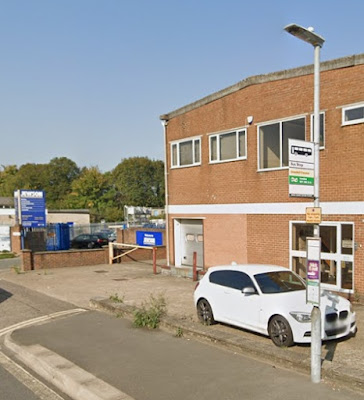 ... is of much more use to a passenger than "Holywell nr Jewsons" from Traveline.
Have you worked out why the W30 is such a mess, as created using a computer (here the word "cofuser" is better") database?

The first thing to notice is the the W30 is NOT a "Circular". It runs in a conceptual straight line from Watford Junction Station to Croxley Park.
Seemples!
But it does have a big loop at the Watford end caused by the one-way-itus of the town's road network in the centre. Without that you could show the route as a decidedly UNcircular ...
Watford Junction Station
Watford Market Street
Watford Met Station
Croxley Park Hatters Lane
Croxley Park Caxton Way
But what throws the confusers into electronic indigestion is a strange and unexplained decision on the part of whoever designed the route and put it out to tender.
In the morning peak and during the day buses serve Caxton Park as above; with the double run to the end of Hatters Lane Building 5 in the new block and then round the "d" of the old estate.
But at evening peak ... yes you guessed it ...
Buses go to  Caxton Way FIRST and then to Hatters Lane Building 5.
There is no reason for this whatsoever and it is what creates the computer-driven nonsense all round.
But if you present the service as two separate "straight line" tables ignoring the temptation to make it "circular", most of the confusion can be overcome. (click on the graphic below for more clarity)

fbb has put the "repeat pattern" in to allow him to make the table small enough to blog, but it would be better to show ALL journeys.
Even better, of course, follow the same route all day! But, as ever, that would be far too simple.
And do you remember those red and black route numbers?
The implication on the map above is that buses run at least every hour to Hatters Lane and less frequently to Caxton Way. TWADDLE! All journeys serve both legs of the estate.
And which journeys do NOT run via Watford Met ... 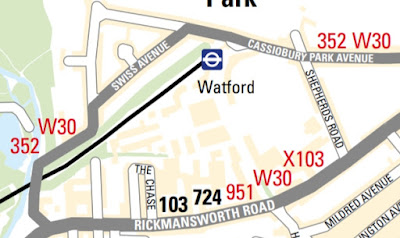 ... is yet another Intalink Mystery.
Despite the company's inability to show the correct timetable on-line, Red Rose does provide a branded vehicle for the service ... 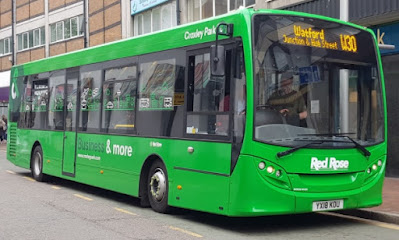 ... presumably with a non-branded bus for the half hour peak frequency.
The 352 (also via Watford Met), by the way, is an unexpected country ride ... 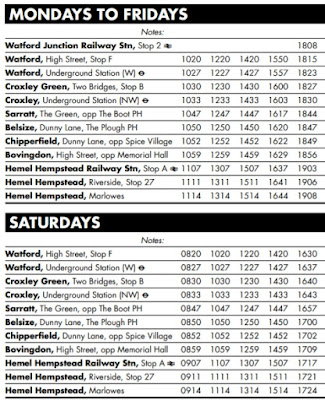 ... and a definite fbb recommendation. Sarratt is lovely! 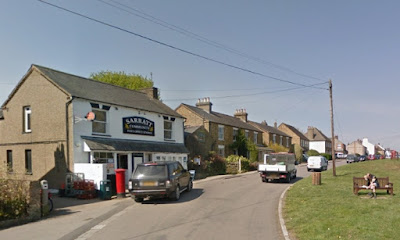 But, returning to the W30; the shambles is not exceptional. It is such a pity the the Boris Bus Bonanza report did not say anything about publicity, printed or otherwise.
It doesn't matter how good your bus service might be if you don't give your customers up-to-date and understandable information. Blaming the virus is NO EXCUSE; it is just about an attitude of mind.
How about including the files for on-line and printed material as part of the service registration? Then (under normal circumstances) you have got 8 weeks to publish them.
After all the registration will be ALL ON LINE, won't it?
Next Variety blog : Friday 26th March
But Easter is coming so fbb presents his usual "daily Easter thought"! 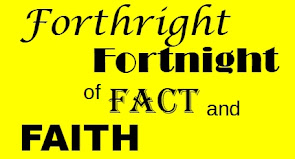 Where To Start?
In a sense the story of Easter begins in the book of Genesis where God creates "mankind in his own image". Adam and Eve, as representatives of the human race, are given the ability to create, to think, to decide; a gift called "Free Will". That is what makes them and us human. But that precious gift was always risky because it is often easier to make the wrong decision rather than the right one.
The Bible is full of people who made the wrong decision and brought disaster upon the people. The Bible is full also of Prophets who were inspired with Godly "breathed in" thoughts to encourage people to get it right, to do it God's way.
But they didn't and still don't.
Isaiah had his eyes higher! 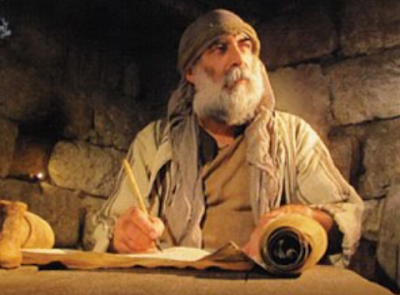 Nobody knows what Isaiah looked like, of course, but we have his writings. About 600BC he had a vision which he accepted was from God. Many people were asking "When will God DO something?", and Isaiah saw what God had planned to do. He would send us his "Suffering Servant".
But because of our sins he was wounded,
beaten because of the wrongs we did.
We are healed by the punishment he suffered,
made whole by the blows he received.
All of us were like sheep that were lost,
each of us going his own way.
But the Lord made the punishment fall on him,
the punishment all of us deserved.
He was treated harshly, but endured it humbly;
he never said a word.
Like a lamb about to be slaughtered,
like a sheep about to be sheared,
he never said a word.
He was arrested and sentenced and led off to die,
and no one cared about his fate.
He was put to death for the sins of our people.
Read these words out to someone who does not know their Bible, ask them to whom they refer; they will, most likely, tell you that they are about Jesus. 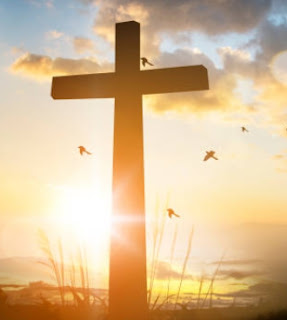 That's Easter predicted - about 600 years early! Surely Isaiah couldn't have just guessed?
The verses quoted are from Isaiah Chapter 53.
Posted by fatbusbloke at 02:00