Much More Than Concrete Cows! 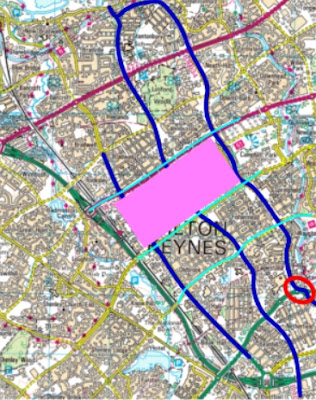 fbb guesses that his readers would not be over-excited by a detailed history of the Milton Keynes road network, fascinating though it be. Needless to say this massive project was not designed for public transport. fbb remembers reading an early guide to the development in which was written, "Public Transport is not like it is in London so if you do not have a car, you should think of buying one."
United Counties "MK" bus services were all kick start funded by the Development Corporation because in the early days they served a whole load of open fields.
Three "top to bottom" main roads (DARK BLUE in the overlay and numbered in a V series for "vertical" and named as "Street") were the first to take shape linking new development as it spread from Wolverton in the North and Bletchley in the South. Reading from left to right they were named Grafton, Saxon and Marlborough Street.
Marlborough Street was the very first. fbb remembers catching a bus from Stony Stratford to Bletchley which, after passing a few cardboard houses at Stantonbury (above map top centre) ... 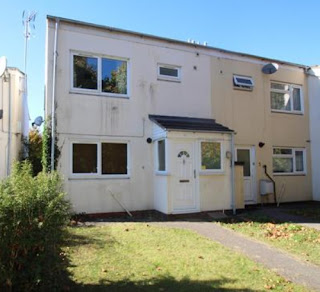 ... did not meet another soul until stopping at Tinkers Bridge (circled) for the Netherfield development. Two boarded. Total loading Stantonbbury to Bletchley, 4! 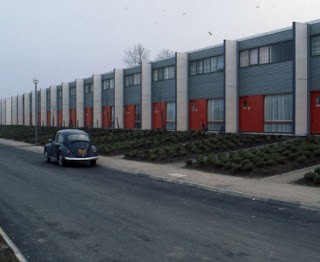 Central Milton Keynes (pink block on map above) ran from station, through a "business district" to the shopping centre which opened in 1979. 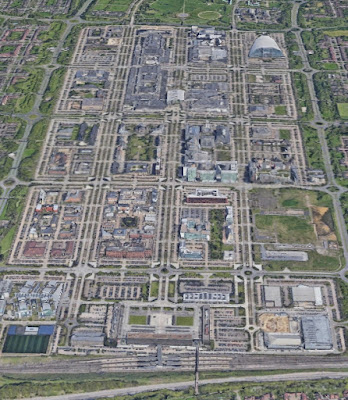 The above image has been rotated to fit into the Blogger template. The station is at the bottom and the shopping "mall" at the top as we face roughly east.
In 1978 the use of MK route numbers ceased and with the progressive opening of the central area the main north south services were developed into a stretched out X-shaped network with the centre of the X being the central area. Services were numbered in a 400 series.
1980 : Final Framework 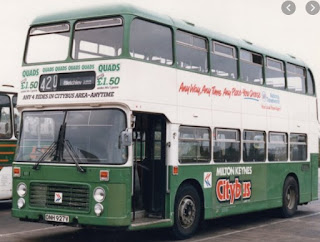 Thus it was that the 420 began its southbound trajectory on Marlborough Street, then "crossed over" at the Centre to continue via Saxon Street. 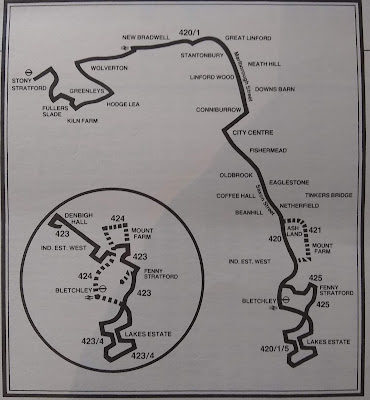 The 420 and its variants were the main services to Bletchley's Lakes Estate. Variants of the core routes were usually services to the industrial areas as in 421 above.
Meanwhile, the 400 did the opposite. 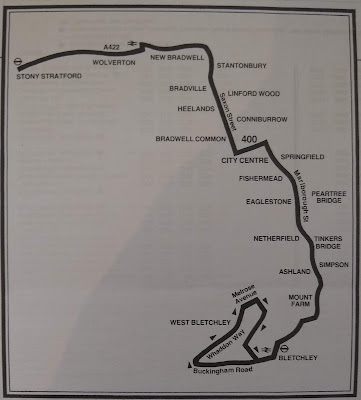 It began on Saxon Street, crossed over at the centre and continued south on Marlborough Street. The 400 was the main service to West Bletchley offering a large loop out via Buckingham Road and Waddon Way and back via Bletchley Station .
The 410 was a bit more wiggly at both ends but served the West Bletchley loop in the opposire direction. 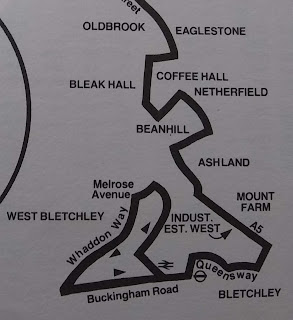 Note that the 410 actually penetrates the estates, most of which had narrow access roads. Here, for example, is the route through Coffee Hall. 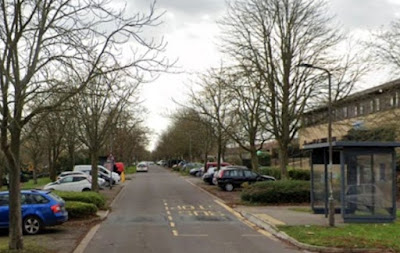 There's plenty of room for car parking but barely enough space for two big buses to pass. This is typical of infrastructure within the blocks. The road is called "Jonathans", by the way ... 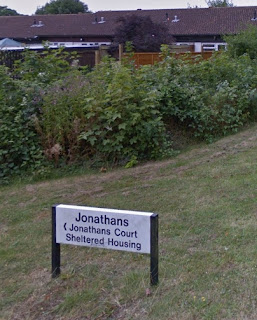 ... exemplar of a Milton Keynes quirk whereby estate roads were not "Roads", "Streets", "Avenues" or "Glades" - just e,g, Jonathans.
Generally each "main line" route ran every 30 minutes often with two routes "doubling up" on busy sections to provide four buses an hour. Lakes Estate, however, only managed three buses an hour, the half hourly 420 plus a once an hour extra via Fenny Stratford and Water Eaton. 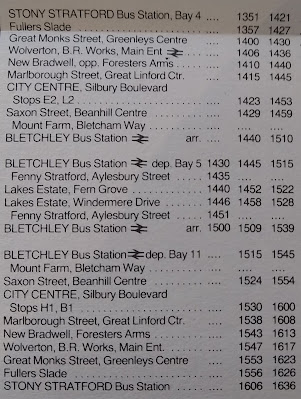 Of course, many will remember that Milton Keynes tried a Dial-a-Bus delving deep into the estates at the Bletchley end of things. 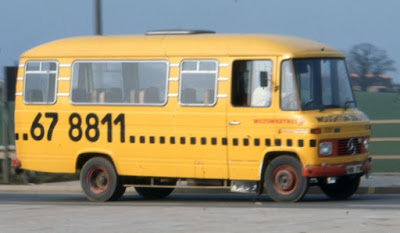 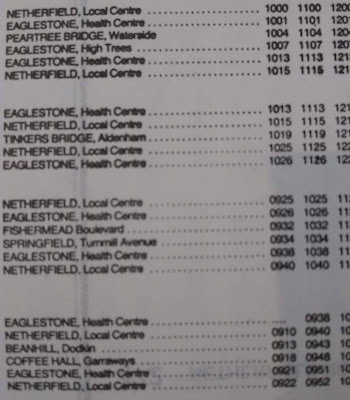 ... although whether anyone understood the route and timetable is debatable. 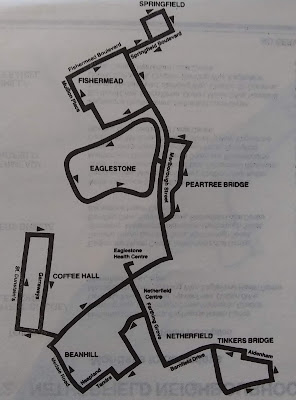 There was also a City Centre service every 30 minutes, providing "mobility" for inner city terraced housing, e.g. at Conniburrow. 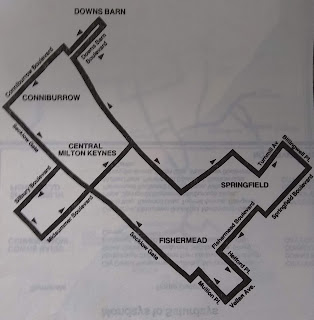 Again, no shortage of car parking, but poor access for buses! 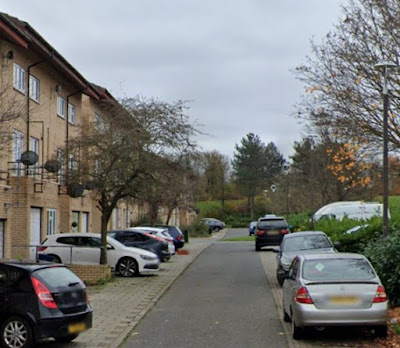 In a sense the picture above summarises the problems of public transport in Milton Keynes. The main road grid is fine and gives good access to all parts of the city - but for those who need to use the bus, or who might be encouraged to use the bus, getting the buses close enough to their front doors has always been a physical challenge and a often a commercial failure.
Whilst the network in the early 1980s was the best MK had ever had (or would ever have???) the demon of privatisations and deregulation was lurking on the calendric horizon. The bit of United Countries that had been branded Milton Keynes Citybus ultimately became MK Metro ... 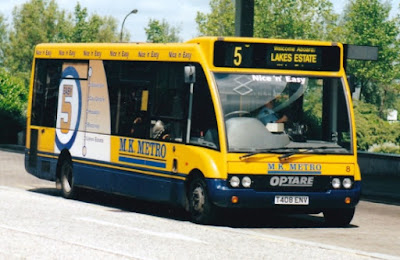 ... competition arrived from various sources but fairly soon evaporated e.g. "On a Mission". 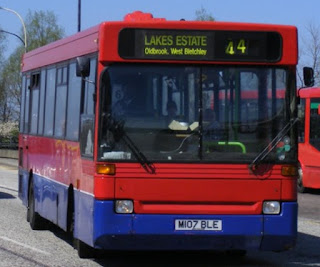 MK Metro was sold to Arriva and we gently but inexorably move into the modern "commercial" age where the unity of United Counties total network ownership has become "main line" Arriva ... 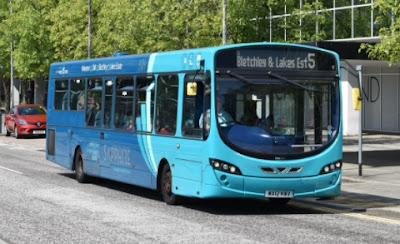 ... and a wide selection of other tendered bits. 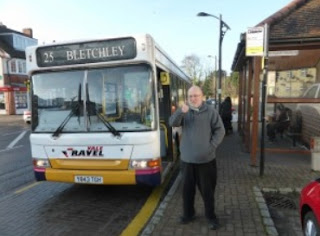 It is not a pretty sight!
Next Tinkering blog : Wednesday 31st March 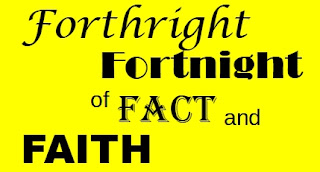 No Holding Back
You would expect the early followers of Jesus to want to remember what he did and what he said. So it should come as no surprise to know that new testament scholars (the clever people!) are very sure that a collection of Jesus' actual words was assembled soon after his death. That collection was used by the four Gospel writers which is why many of the events of Jesus' life are accompanied by similar quotes.
What is very clear is that, as the human Jesus faced up to his very human death and subsequent very un-human resurrection, he had plenty to say. He even told a timely parable about his "purpose".
In summary, a man built a vineyard (God created the world) and let it out to tenants (the people, us). He sent his servants (prophets) to keep his tenants on the right road of sticking with the owner and giving him a share of the takings (worship). But the tenants ... 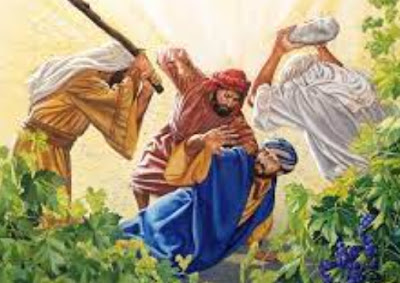 ... rejected God's help.
The only one left to send was the man's own dear son. Last of all, then, he sent his son to the tenants. "I am sure they will respect my son," he said. But those tenants said to one another, "This is the owner's son. Come on, let's kill him, and his property will be ours!" So they grabbed the son and killed him and threw his body out of the vineyard.
“What, then, will the owner of the vineyard do?” asked Jesus.
Jesus ended his little illustration by quoting from the Bible, which for him was our Old Testament.
The stone which the builders rejected as worthless
turned out to be the most important of all.
This was done by the Lord;
what a wonderful sight it is!
That's Easter!
Quotes from Mark's Gospel chapter 12 and Psalm 118
Posted by fatbusbloke at 02:00