Llangollen Station is a stop on the former Great western line from Ruabon to Barmouth. Not a "branch" line, it was typical of many cross country routes that ran from nowhere much to nowhere much. In its heyday it was important for local goods, local passengers and, notably in the summer, tourists in fairly large numbers. None of these businesses was ever strong enough to sustain the line into the modern age and, like so many others of like quality, it closed in 1965. Llangollen, Corwen, Bala and Doplgellau are the largest communities served by the line, of which Llangollen is the most well known, perhaps.
The bridge at Llangollen was built across the Dee in the 16th century to replace a previous bridge built in about 1345 by John Trevor, of Trevor Hall (later Bishop of St Asaph), which replaced an even earlier bridge built in the reign of King Henry I. In the 1860s the present bridge was extended by adding an extra section (to cross the new railway) ... 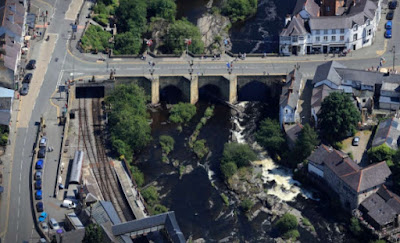 ... and a two-storey stone tower with a castellated parapet. This became a café before being demolished in the 1930s to improve traffic flow. The bridge was also widened in 1873 and again in 1968, using masonry which blended in with the older structure.
The town's main claim to fame is as the host of the International Eisteddfod ... 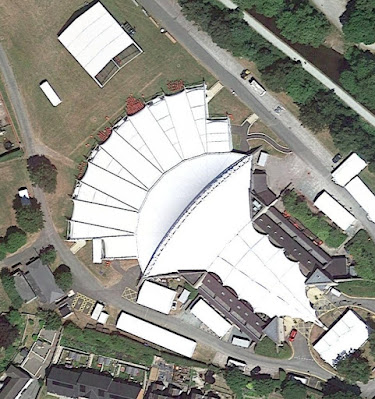 ... now held in the massive purpose-built "Pafilion" (translation from the Welsh available from the usual sources!) 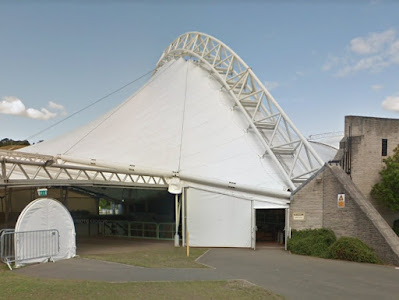 Not far from Llangollen is the delightfully unpronounceable Pontcysyllte Aqueduct carrying the Llangollen Canal high over the River Dee. 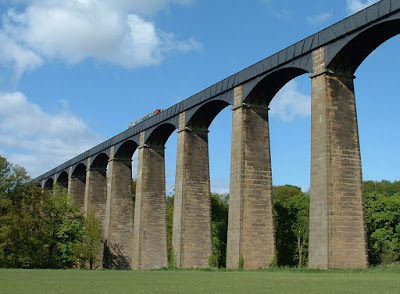 OK fbb will have a go:- Pont (easy) cu (as in cup) syll (silth as in filth - nearly) tu (as in tug) becomes Pont - cy - silth - tu! With profuse apologies to those who can do it proper, like!
The railway station at Llangollen has one of the most picturesque settings of any station in the UK ... 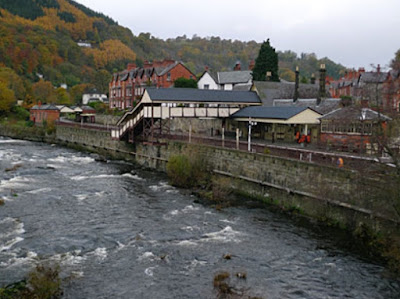 ... and is the HQ of the Llangollen (Heritage) Railway.

The old main line closed to passenger traffic in 1965 and to goods in 1968. The track, signalling and much of the infrastructure was removed or demolished quickly after this, although Llangollen, Berwyn and Carrog Station buildings survived.
The enthusiasts commemorated the reopening in 1975 with an open day at Llangollen Station where 60 feet of track had been relaid. The rest, as they say, is history. Berwyn was reached in 1985, Deeside in 1990, Glyndyfrdwy in Easter 1992 and Carrog in 1996.
On Wednesday 22nd October 2014, the first passenger train pulled into Dwyrain Corwen East along with newly extended 2 1/2 miles of line from Carrog to Corwen. 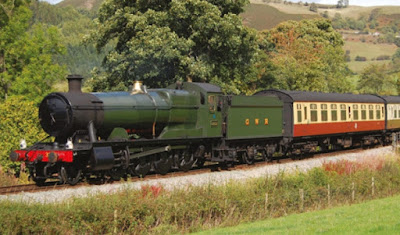 A significant new station is being built at Corwen as access to the former building ... 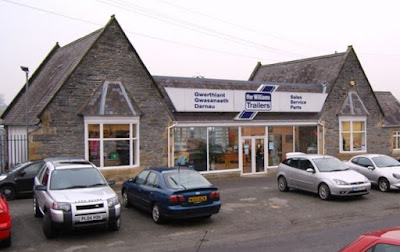 ... is no longer available. The new site for "Corwen Central" is on the embankment adjacent to the town's car park, providing an excellent advert for visitors to the town. 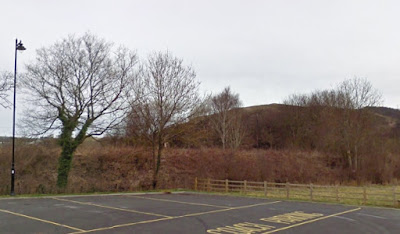 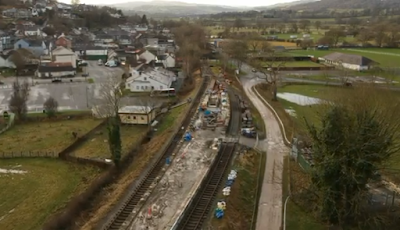 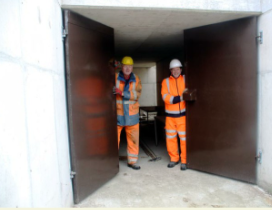 ... and a temporary GWR liveried porta-hut as a station building. 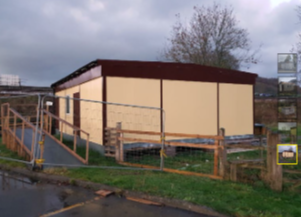 But plans are for something more permanent ... 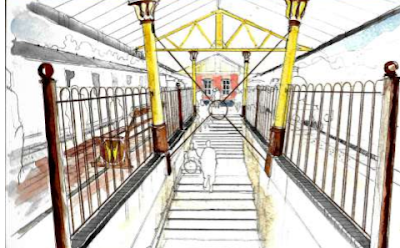 ... move protected from the famous welsh weather and more GWR like. 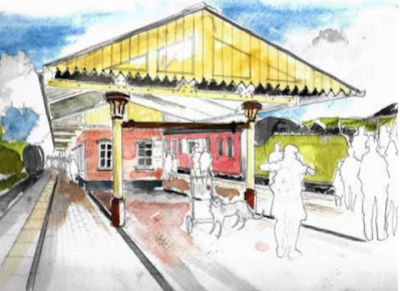 The line runs through beautiful countryside mainly along or near the banks of the Dee; and its stations are mostly well preserved GWR structures, complete with the inevitable pile of period luggage. 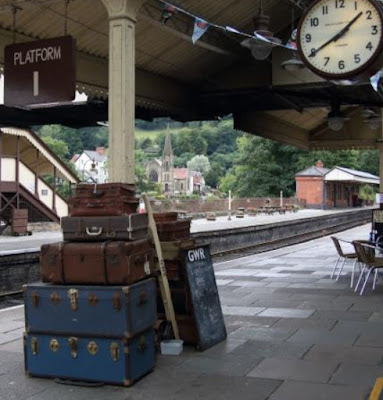 But all is not well in the hallowed halls of Llangollen station. Lengthy press reports have been expurgated by fbb to tease out the essentials.
Llangollen Railway's future has been cast into doubt after inviting the bank to appoint a receiver. Amid mounting debts, the heritage railway says it has made the move as it "cannot legally continue to trade". The company’s accounts show pre-tax losses of £330,601 in 2018, £329,175 in 2019 and £258,804 in 2020 (pre-audit). 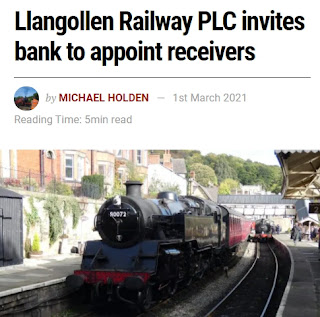 Even our readers with minimal experience of the dark arts of business accountancy will agree that the above numbers are less than encouraging!
A statement released by Llangollen Railway PLC states that a number of "significant" engineering contract disputes, all of which arose in the years prior to the current board taking over in October 2020, have "crystallised" in the last few days.
That might be "business-speak" for "contractors want paying and we ain't got enough money to pay them!"
Clearly there has been unease at the company for some time, with a new board taking over last year.
The claims against the company are said to be "compelling" and are in excess of £250,000 in total. There is said to be no prospect of meeting these liabilities, even over an extended period.
The Trust board will need to take steps to negotiate with the receiver to try to secure the line and preserve rolling stock and infrastructure to the extent possible. It is intended to recommence operations in due course but this is dependent upon legal approval.
What is receivership?
Receivership, formally known as administrative receivership, is a legal process whereby a receiver is appointed by a floating charge holder, such as a bank or other lender. The receiver then "receives" any of the assets of the company that it can liquidate in order to pay back the lender.
To put it very simply; the railway has borrowed oodles of money from the bank and now realises that income will NEVER be enough to pay back the loans. The receiver needs to find stuff to sell so that the bank stands a chance of getting its lolly back. But who wants to buy old railway stations, coaches, wagons or even locomotives, especially at this present "economically challenging" time?
Looked at coldly, the italicised paragraph above looks very optimistic!
Very sad.
Does this bad news re-open the debate about there being too many heritage railway lines chasing fewer customers as we oldies peg it and the youff know little of steam trains and care even less?
Tough question!
fbb certainly hopes that this lovely line can survive; he has only visited Llangollen station once, on a non operating day but it was a joyous feast of nostalgia.  It was raining!
And how it was in 1955. 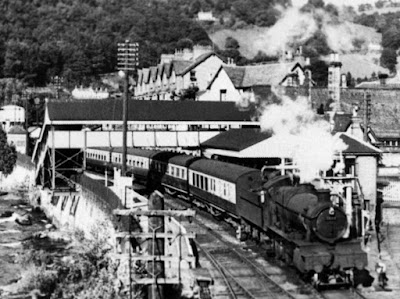 Next Collectors blog : Friday 4th March
Posted by fatbusbloke at 02:00