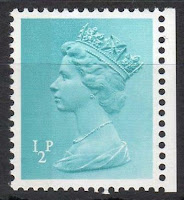 fbb used to collect British stamps, not as an investment but because they were interesting. Above is a half penny (decimal) stamp with one phosphor band at the side. Phosphor bands (which glow under light from a special lamp) are used to allow automatic sorting machines to work. The lines are used to sort first and second class mail and turn the envelope round (called "facing") so the postcode can be read and the stamp can be mechanically cancelled..

If you are a serious UK "Elizabethan" philatelist, you need your full set of phosphor-graphites. The GPO even sold a pack of two sets, front-on for phosphor and back view for graphite lines. 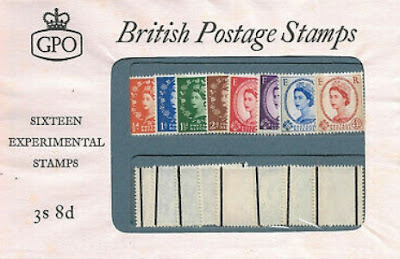 The half penny sideband would cost you £50 today.

The double set of phosphor-graphites a mere £345.

Anything and everything is collectable. Chum Peter, for example, collects bus ticket machines for which there is, of course, a society ... 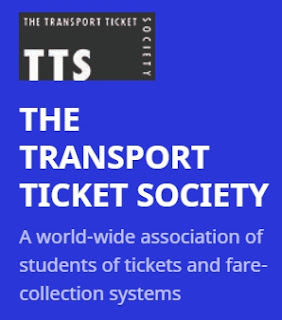 ... which produces a "Journal". You can tell a collection of collectors is serious if they call their magazine a "journal". 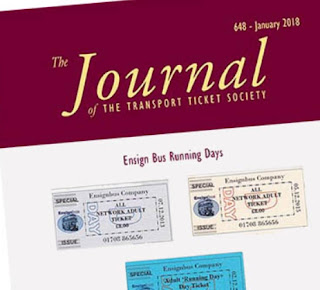 The subject is fascinating, but some collections are just, well, weird.
There was once a contestant on the TV show "Pointless" who collected airline sick bags, presumably in unused condition!

It turns out that he is not alone!! 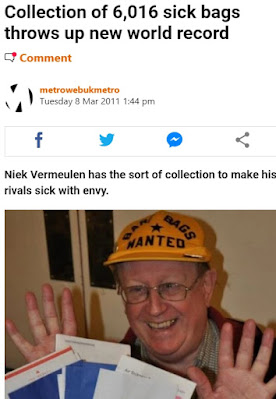 And, of course, there are many who collect railway memorabilia, notably railway signs.
There are plenty of cast iron signs around ...

... but, because they are relatively easy to make, reproductions are quite common. Caveat Emptor as the Romans used to say to their over-enthusiastic railway sign collectors!

Stove enamelled signs are much more expensive to make, so fakes are less common and can be as expensive as the genuine article. 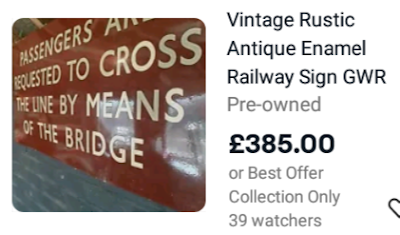 ... but even signs with no obvious railway colours or logo can cost more than they should! 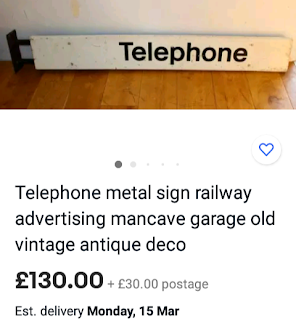 How easy would it be to fake an antique "telephone" sign ... 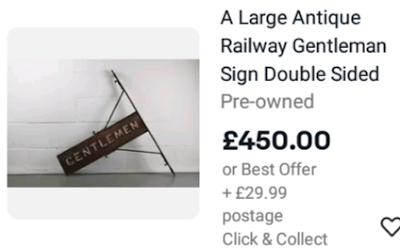 ... either cast or wood with "applique" lettering? The price for the above suggests it is genuine - but you may never know for sure.

Those of us who can extend our lunch hour may be tempted to watch "Bargain Hunt" where even the "experts" have been known to slaver over an antique thrumble-nangler only for the auction house to reveal that it was made in Taiwan in the late 1990s!

But the real "biggies" (both physically and financially) tend to be authentic name plates from famous steam locomotives.

Here, for example, is a preserved Southern Railway West Country class locomotive - known to the train spotting fraternity as a "Spam Can"! 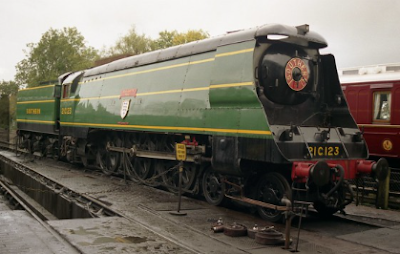 Note that it wears Southern Railway livery and carries the rather strange number 21C123, a weirdness devised by the pre-nationalised company for reasons which are still not very clear. Here is similar locomotive "Wadebridge" in BR guise. 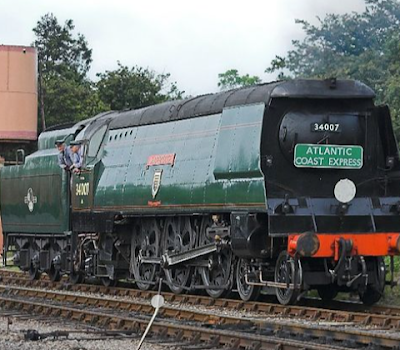 It is preserved on the "Watercress Line (in Hampshire) and is currently awaiting overhaul. Note that, on its side, it carries the name "Wadebridge", the town's crest and scroll which reads "West Country Class" 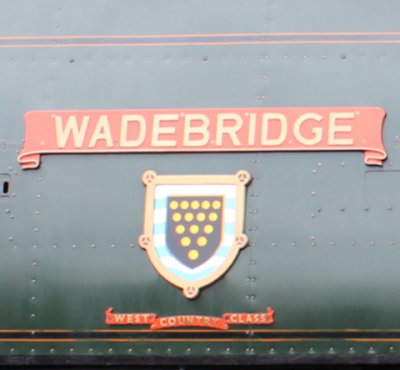 So, mysteriously, this set comes up for sale at auction. Why the Railway doesn't want them any more is not clear; but maybe selling the genuine article and replacing with newly cast duplicates is a way of making money for the overhaul. 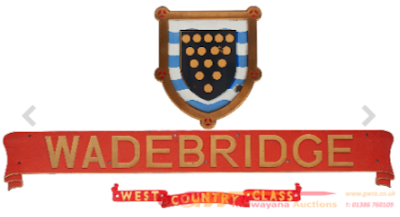 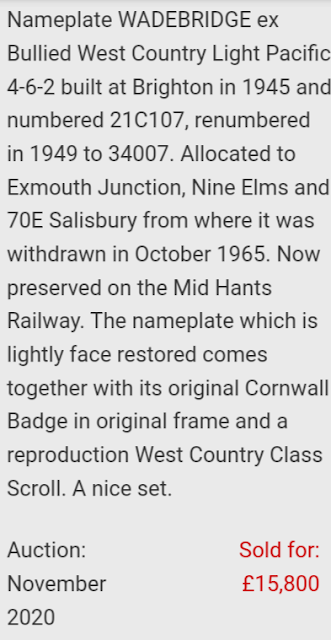 fbb gave up collecting stamps a good few years ago as the Royal Mail started commemorating manhole covers, breeds of louse and the anniversary of the invention of Marmite. (a jest, but some of the "Special" issues have been equally esoteric!)

You noble blogger does have a small collection of railway signs, to most notable of which is this one ... 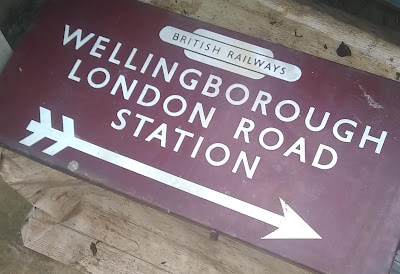 ... but the favourite is this. 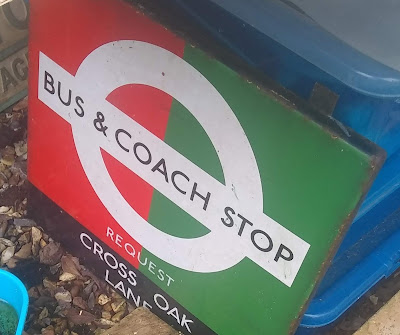 What, you may ask, has prompted this rambling on about collecting. Two factors, really. fbb is awaiting yet another tank wagon for his collection which, as might be expected, hides an interesting tale or marketing mayhem.

One happy memory of youthful years was the arrival in the shops of the annual Triang catalogue. In the days before the interwebnet and social media, this, plus adverts in the modelling magazines, were your ONLY source of news about the company's plans.

Chum Mike Lovett saved up and bought a class L1 ...

... although Mike's was in BR livery - not Southern.

Were they every green under either ownership? 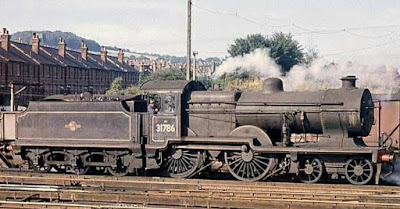 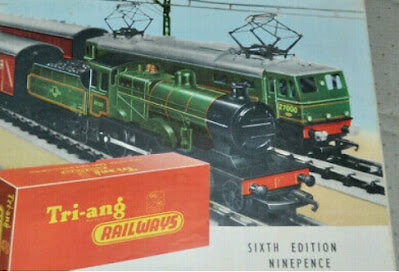 That's the catalogue, by the way, not the loco. Yer actual L1 will cost you between £75 and £100 depending on box and condition.

The bogie on Mike's L1 kept derailing; too light for his bumpy track! fbb was seethingly jealous because the model looked so good even if it tended to fall off the track at pointwork.

So it was that, a couple of weeks ago, fbb bought a Bachmann model railway catalogue (£8.95 post free from Rails of Sheffield). Immediately, even for a newcomer to the subject, it revealed how much the hobby has changes over fbb's lifetime. 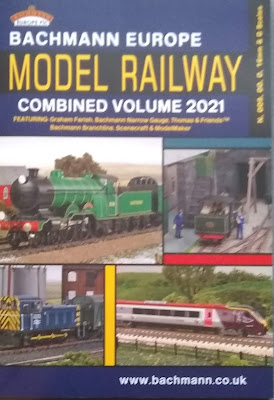 In some ways it was a bit like the good old days again when fbb's chums at school would send off for car catalogues from people like Volvo. There was much drooling over the unobtainable (and, obviously, unownable by 14 year olds). Richard Thurland sent off for one such and was somewhat alarmed to have a brand new car turn up at his front door to offer him a test drive. Fortunately Richard was at school and his mother rejected the kind offer.

The Bachmann catalogue is 182 pages (plus 16 pages of additional "announcements") all printed in full colour "on fine art paper". It is luxuriously lavish but contains no prices; presumably modewrn-day modellers don't care how much these intricate marvels will cost.

So, over the next few days, fbb will share some of the mind boggling product range from Bachmann. Although there is plenty of promotional material on line, only the catalogue tells the full story - and what a classy (and expensive) story it is!