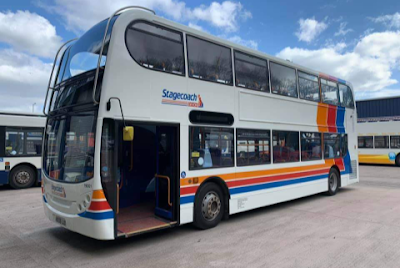 Commemorating 25 years of Stagecoach Devon, this is a full view of the bus in vintage livery which was revealed earlier in a Tweet Tease. Looks nice, but the white never really worked, as it doesn't in the latest paint style.
Livery Delivery North East 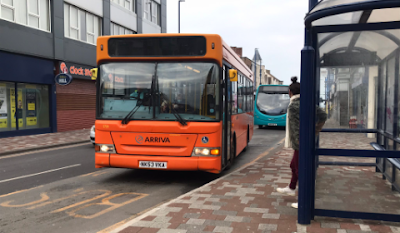 An Arriva in orange serving the good folk in the North East of England. But, orange? Route branding? An ex Yorkshire Tiger bus? 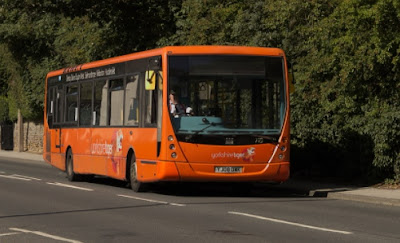 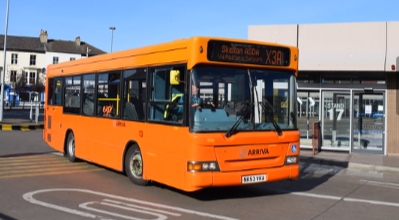 From the on-line photographic evidence it looks as if NK53 VKA has spent all of its life in the North East (if you include Whitby in that geographically broad brush area).
So here she/he/it is in one of the early Arrive blue and stone liveries. 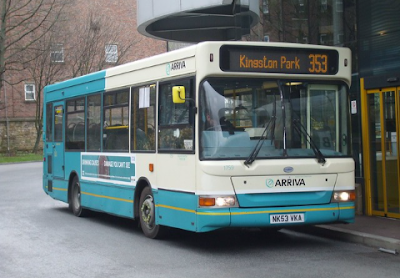 Later it appeared in the modified (improved?) colours ... 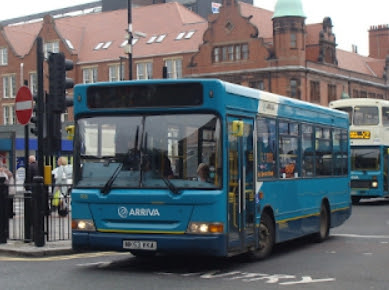 ... with slightly different blues.
So why orange. Aha ... 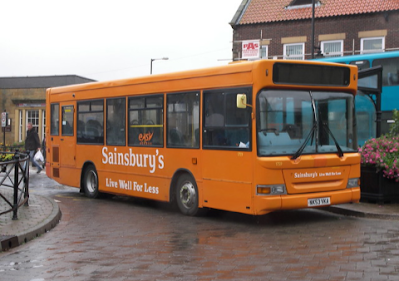 ... it is Sainsbury's orange. According to the interwebnet the bus was scheduled for withdrawal but re-instated as a spare.
So we are not getting a full rebrand from Arriva!
It's Not Just First's Befuddlement

Their information can be a bit of an adventure. In about a month's time there will be timetable re-instatements and revisions for the summer season. Of course, as usual, there is nothing on their website despite their advertised skills.

If you stir around a bit, you do pick up advice to refer to Facebook. Here there is a list, mainly of re-instatements from 16th April.
This includes two afternoon journeys on the Sheffield local M17 route. (click on the graphics for enlargements)

According to Travel South Yorkshire, these have been running since 25th January 2021 at least.

Does the Hulley note refer to reinstatement on Saturdays? Did the PTE get it wrong in January? Who knows. In January most Sheffield services run by Stagecoach and First began operating Saturday services on Monday to Friday. Did Hulleys do the same and are they, then, re-instation the two deleted Monday to Friday journeys.
Who can tell - but it is ALL ON LINE!
What is perhaps MORE interesting is the announcement of changes from May. 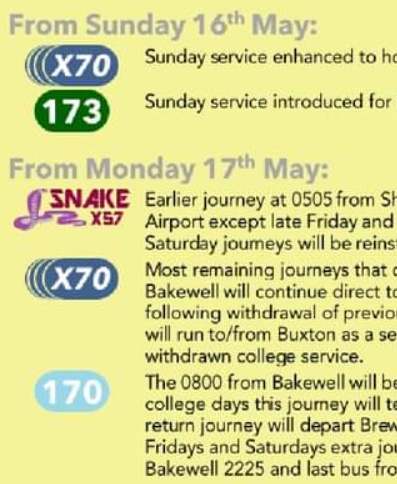 Most interesting is that the X57 will be extended to Manchester Airport and the X70 extended to Buxton. The latter replaces route 66 from which Hulleys withdrew (without replacement) some time ago.
There is no mention of the re-instatement of the X56 journeys from Glossop to Manchester, withdrawn under Virus cut-backs.

The once complex X71 into Derbyshire with multiple destinations will return but as an "excursion" service to Alton Towers only.
fbb awaits the timetables with interest.
The On-Going Obsession 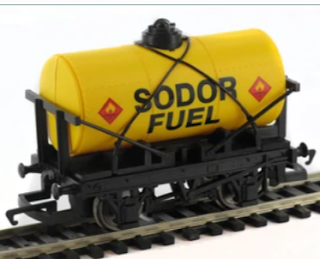 fbb has been well aware the Hornby produced a tank wagon in its Thomas the Tank Engine series. Indeed there was some variety of tankers for Tidmouth.

The old man was not really interested in the "Sodor Fuel" vehicle as it was exactly the same model as the "Milk" version which fbb had acquired as part of a sub-set of wagons for cow juice. It was a standard Hornby model with different colours - and fbb does not normally collect livery variations - there would be too many.
The model can be pricey ... 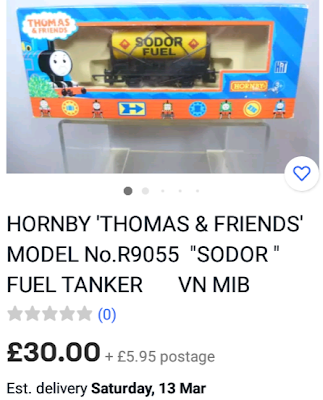 ... especially in its original box. OUCH!
But Hornby withdrew from the deal with Thomas and no longer manufactures the kiddies selection. Meanwhile, Bachmann had a Thomasian deal to market the toys in America. Bachman's Thomas is shorter than it (he?) should be ... 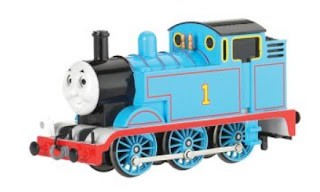 ... but, by way of compensation, his eyes move!
With the departure of Hornby from the Thomas franchise, Bachmann (and some retailers) have been importing American models fitted with UK couplings. There is a huge variety ... 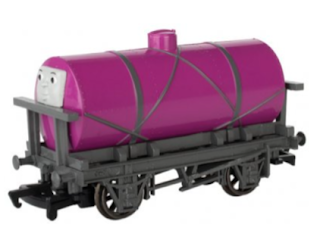 ... including a Troublesome Tank Truck in purple c/w cheeky face! Some of the US models have dropped out of production and are thus on offer at silly prices. 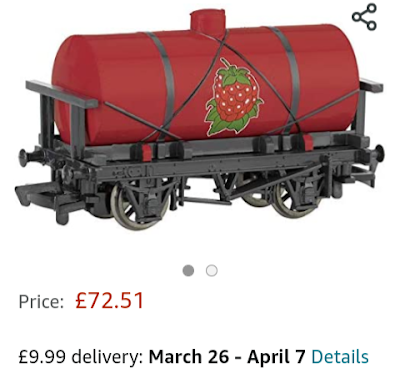 But note that the wire strapping which, in a real tank wagon would hold the tank to the chassis, is simply moulded on to the container, in the case above designated fir Raspberry Syrup. (Hornby did a syrup version for a while with a realistic attempt at "proper" strapping.) 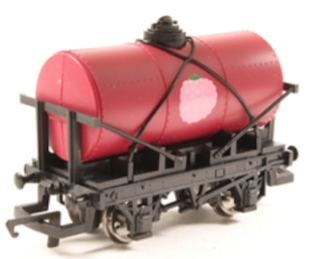 So fbb needs a Bachmann wagon for his burgeoning collection. As these are imports from the US, they are stupidly expensive ... 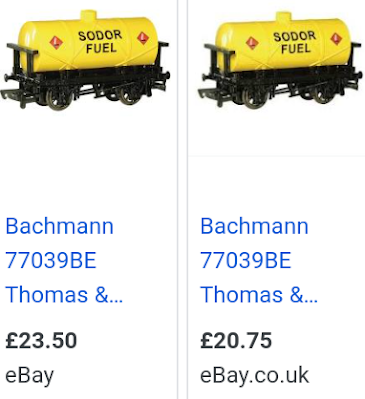 ... generally costing between £20 and £24 plus "postage" which can be up to a fiver. And the strapping cables are not even painted black! That  makes these no more than crude toys (they are not "models" by any stretch of the imagination). They are priced similarly (or higher) than the highly detailed Oxford Rail tankers ... 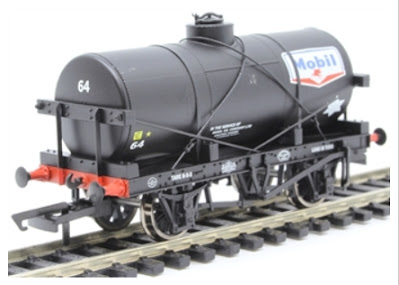 ... one of which arrived at fbb mansions for £18.50 plus £2.50 postage!
Although it is daft to spend more on a crude toy than on an excellent scale model, the obsession callsed loudly and so the Sodor Oil toy tank wagon duly arrived ... 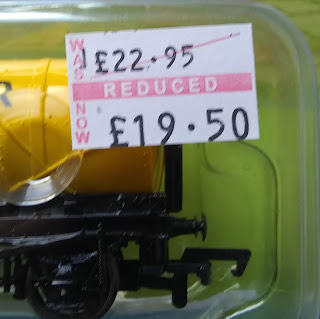 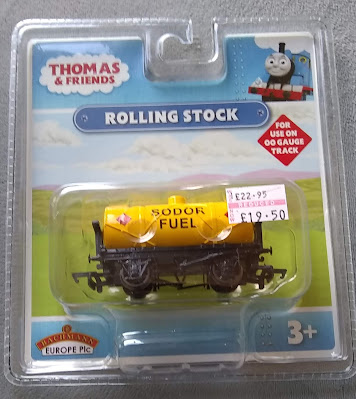 ... so does the old man break open the pack so he can drool over his latest acquisition OR leave it totally engulfed in plastic ready for his beneficiaries to sell it off at a thumping profit - "still factory sealed"?
Tomorrow we return to Yorkshire, Keighley to be precise.
Next Dalesway blog : Wednesday 10th March
Posted by fatbusbloke at 02:00