This is the ventilation shaft for the Chiltern Tunnel on High Speed 2. Back in the good old days it might have looked like this:- 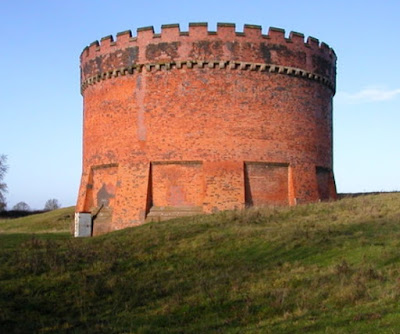 Maybe the HS2 objectors would prefer something this size in reinforced concrete. 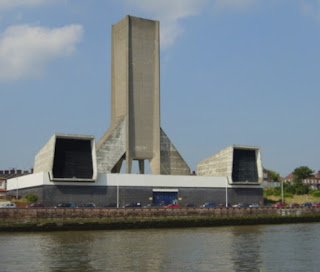 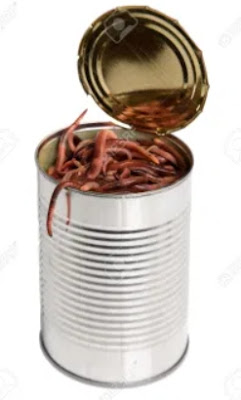 Crystal Colonnade Crystal Palace - a PS
Searching for aerial views of  Paxton's Pulchritudinous Palace produced some pictures which actually showed the walkway between High Level station and the Palace itself. 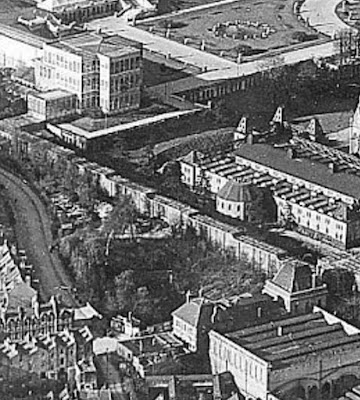 Above we see it running from station (lower right) along the wall above the cutting, then making a sharp right turn to link in to a wing of the main building. And the same again below. 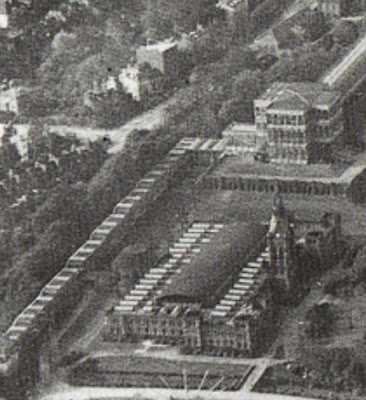 The pavilion to the right of the walkway was from Canada and the terrace on which the link building stands is still present in Crystal Palace Park. 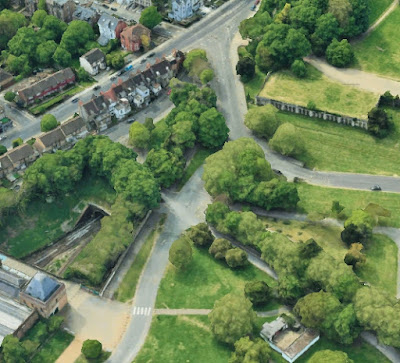 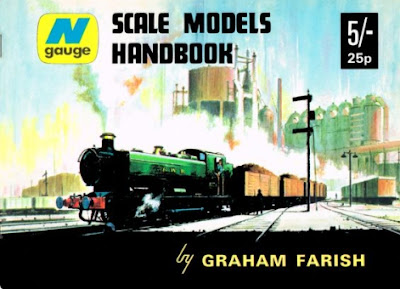 The initial range in 1970, started with a selection of rolling stock and some track - but no locomotives. The Pannier Tank arrived in early 1971. 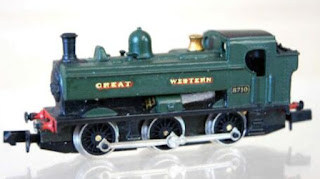 In 2001 the company was taken over by Kader, the parent company of Bachmann, but the Graham Farish name was retained and the range developed. Indeed this blog reported that 16 different brake vans were available in OO gauge, but you can have a choice of 19 in the current catalogue with a 20th just advertised under the Bachmann EFE brand!
It's called a "Shark" brake van, because the price bites your head off! 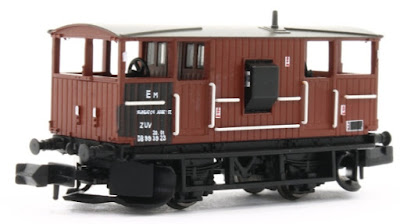 On-line prices vary from £33.25 plus £3.50 postage to an eye-watering £40.95 but with free postage. It's about an inch and a half long. OUCH!
But the model railway world has chosen to celebrate Graham Farish's half century based on its N gauge loco from 1971.
And GB Railfreight ... 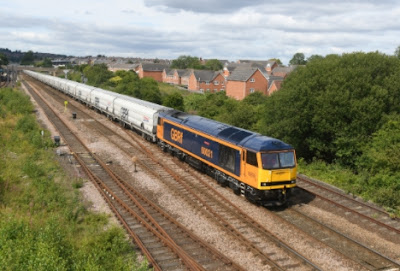 ... have named on of their just-repainted class 60s in honour of this somewhat arbitrary anniversary. 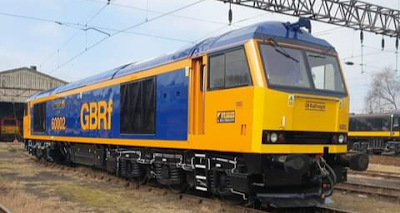 It comes complete with modern (but dainty) logo. 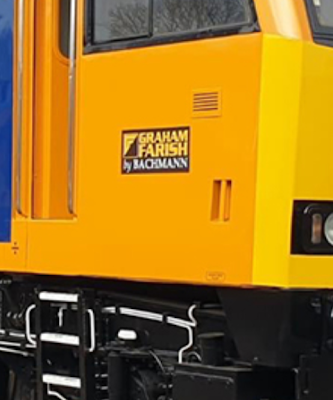 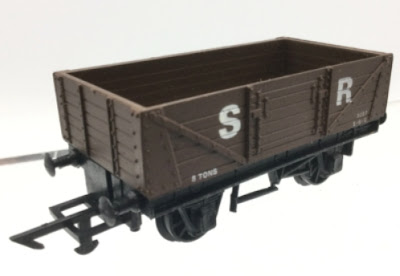 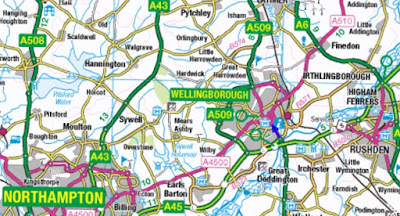 (click on the map for an enlargement). Wellingborough is on the Midland Main Line served by East Midlands Railway (the company of ecclesiastical purple livery fame) where trains for the new electric service to Corby are being tested prior to introduction with the May timetable change. 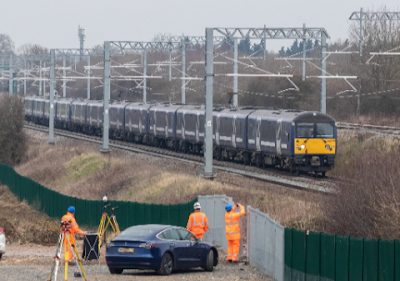 These hand-me-down trains will run a 30 minute service from Corby, calling at Kettering, Wellingborough, Bedford and limited stop into St Pancras. Currently Wellingborough has a variety of trains southbound, but they are all real trains and fast trains with various degrees of fastness. 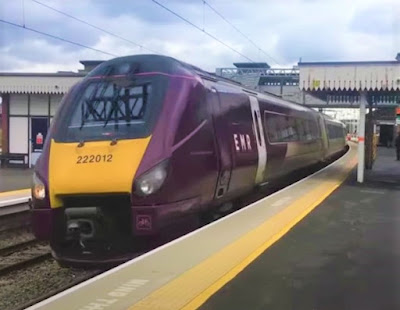 Currently on Mondays to Fridays the Wellingburians have EIGHT trains to London St Pancras departing between 0603 and 0807 (inclusive) which is, you would have to admit, a stonkingly good service for a small town. 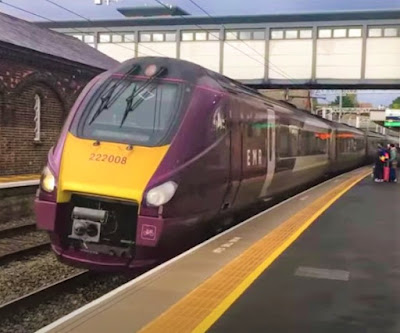 The pattern during the off peak period is for two trains an hour.
Which is not bad either!
Under the forthcoming May timetable change, the town will lose ALL its "InterCity trains which will be replaced with the half hourly Corby "commuter" train service. Here are the current departures.

In other works instead of EIGHT trains to the Capital, there will be FOUR.
Needless to say the worthy rail-borne workers from Wellingborough are not at all happy, a state of woe reported avidly in the local press.
Only two trains will reach the capital before 9am while services will also take longer to reach London St Pancras because of extra stops added to the journey.
One commuter said: "Two trains an hour in the peak is a complete disgrace. I can just about put up with the longer journey time but this is a severely retrograde step in terms of flexibility."
The refurbished Class 360 units also have a slower top speed
Another member of the Wellingborough Rail Users Facebook group, Giles Davies, added: "Stations like St Neots and Huntingdon are probably the most comparable to the new service we will get and then have a half hourly service during the day but during rush hour get four trains an hour. How it is acceptable Wellingborough will still only get an off-peak service during rush hour?"
An EMR spokesman said: "Overall, the new timetable will provide more seats, quicker journeys and a simpler and more resilient timetable for passengers. It includes significant changes to and from London St Pancras International as we introduce our new electric train service between Corby and London alongside Intercity services."
Of course, the EMR spokesman is talking twaddle to the Wellingburians. Whilst the overall service may be better with quicker trains from the north etc., this is undoubtedly at the expense of services to/from Wellingborough, particularly at peak times. 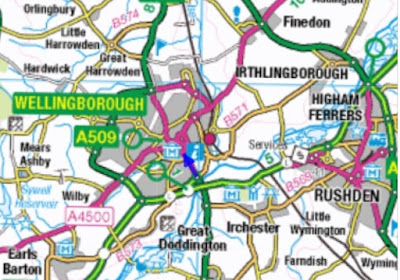 The people of Wellingborough and the residents of the huge catchment area of small towns that surround it deserve better.
Puzzle Picture 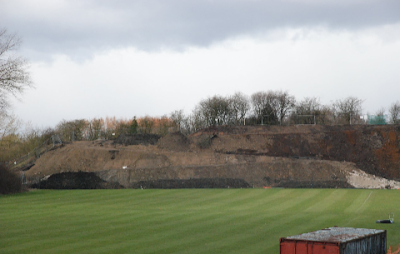 Where and what is it? There is a tenuous connection with Tim Dunn.
Answer tomorrow.
Next even more delayed Weekernd Variety blog : Tuesday 19th March
Posted by fatbusbloke at 02:00