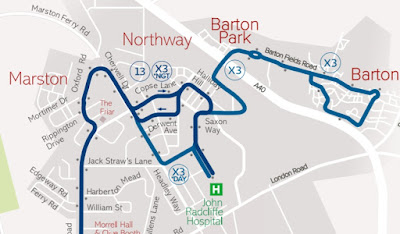 You will remember (how could you possibly forget?) that the January changes in Oxford brought an X3 to John Radcliffe Hospital  H  instead of an X13. 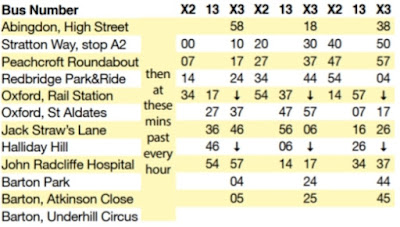 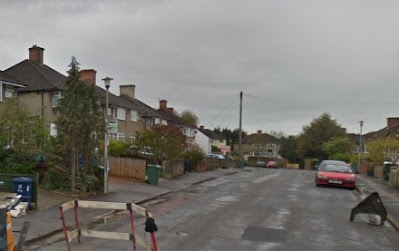 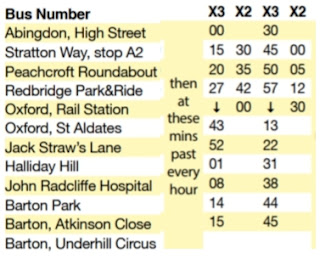 Northway Estate is Halliday Hill.
Logically, and sensibly for Joseph Public and his chums, the X3 should always run via Northway and the 13 should go direct. That way it would be the same number all day at Northway. Presumably the scheduling computer won't allow it - or maybe nobody thought of it.
There is also a "Mystery at Barton" which sounds like an episode of "Poirot". 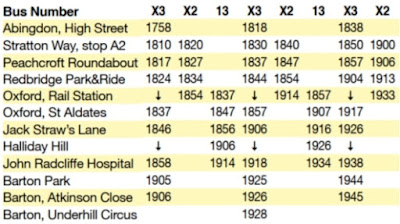 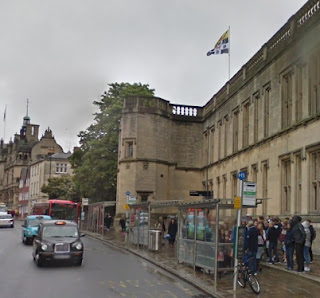 ... run beyond Atkinson Close to enjoy the clowns at Underhill Circus? It is the only journey that goes there all week. But then "Atkinson Close" doesn't look much like a terminus time point. 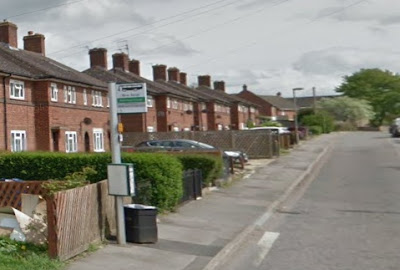 Underhill Circus looks a little more likely; it is a roundabout with a shopping centre (possibly an over-optimistic use of the word "centre") in the middle. 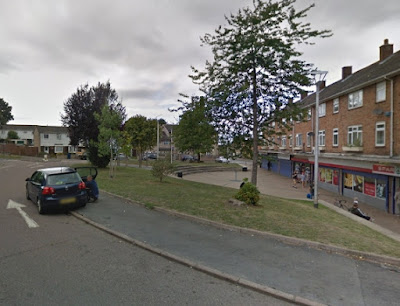 But why only one journey a week will get you there remains a true challenge for Bartonians "leedle grey cells". Mind you, the bus stop "round the back" doesn't look too much like a well equipped terminus, either. 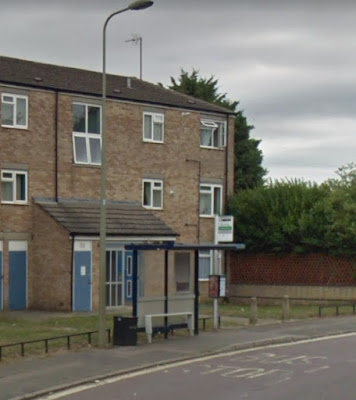 It's a loop, innit? (you need to click on the map for a readable enlargement) 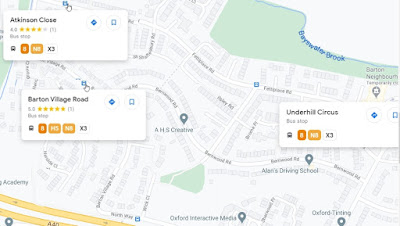 Atkinson Close (on Fettiplace Road top left) is the first stop on the loop, Underhill Circus is where X3 buses have a little rest and Barton Village Road ... 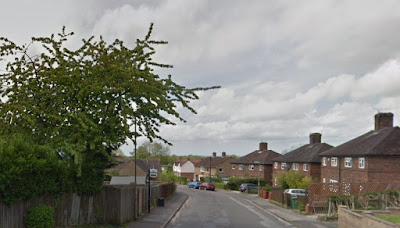 ... is the last stop on the loop. Presumably ALL X3s complete the loop and trundle back to Oxford or Abingdon - EXCEPT that odd Saturday journey.
Why are bus companies so utterly useless at showing loops? If all buses stop at Underhill Circus, there should be a time point there on ALL journeys. Ideally there should be a time at the end of the loop as well. But that may be asking too much.
So, in order for fbb to help Go Ahead Oxford Bus fulfil its aims and ideals ... 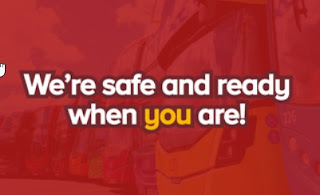 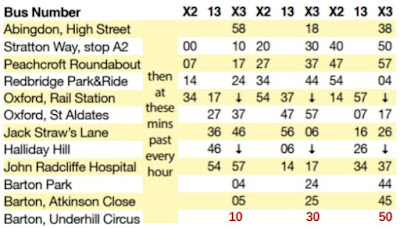 Now that wasn't too difficult was it.
For the record the X3 loops a smaller loop that route 8 ... 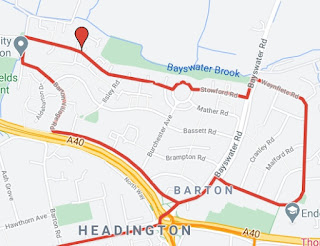 ... which runs to Barton straight along the main road and is a joint service, with Oxford Bus in a fetching orange livery ... 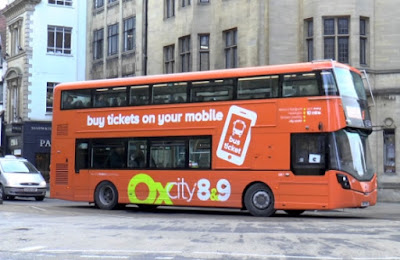 ... and Stagecoach in one or other of their "ordinary" liveries. 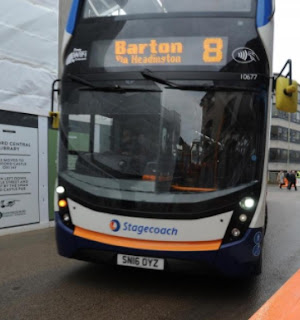 But do not panic, dear reader, the X2 expose (with accent) will follow soon.
Saturday Variety
Atlantic Coaster Above comes confirmation that the Atlantic Coaster name will still apply to First Kernow open toppers between St Ives and Padstow. That will be a ride and a half! Most of the former Atlantic Coaster routes ... 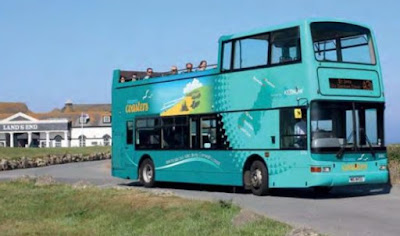 ... will be Land End Coasters from this summer.
Another Refreshing Brand After Wessex comes Essex! Not a new name ...

... but certainly a new look for the workhorses of Essex.
A Splendid Impact On Crossrail In Acton! 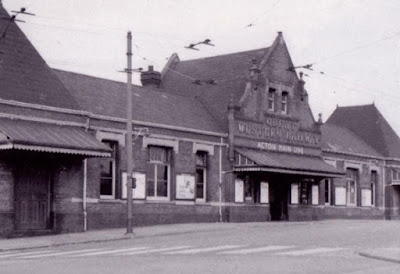 Acton Main Line is a suburban station on the main line (there's a clue in its name) from London Paddington. It once had a distinguished station building set fair on the bridge over the, erm, main line. It was replaced by something far less elegant. 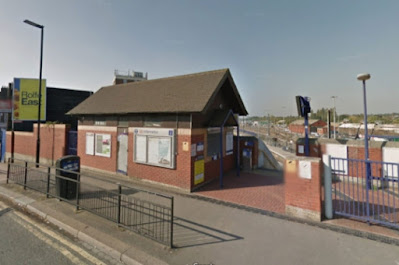 But now a third, brand new station has been built, just round the corner from the overbridge site. 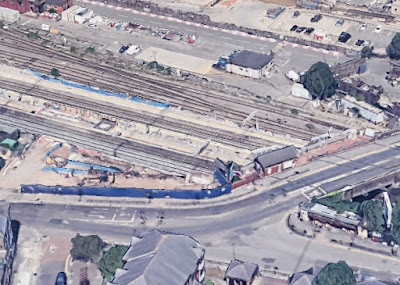 It seems to be aimed at Creating Desire  ... 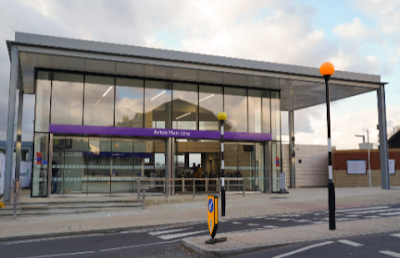 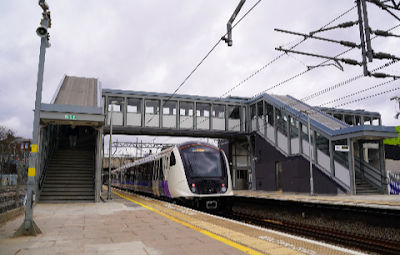 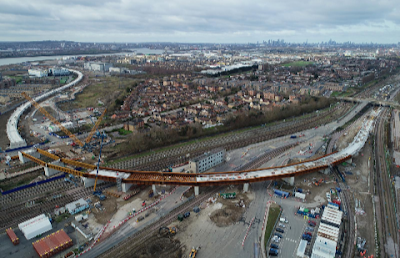 Where and what is it? Answer tomorrow.
Next Fun With Numbers/Variety blog : Sunday 21st March
Posted by fatbusbloke at 02:00