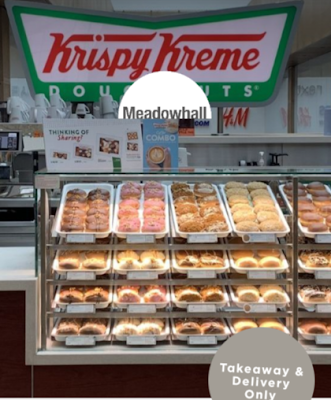 Occasional correspondent Jordan is a volunteer tram driver at Blackpool and Crich, but to earn his crust he is a shift supervisor at Krispy Kreme at Meadowhell shopping centre, Sheffield. fbb once bought a Krispy Kreme doughnut (maybe it was a donut?) at Heathrow Airport Terminal 5. 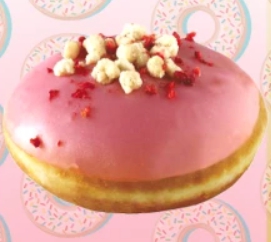 It had Dayglo pink icing so bright that fbb had to shield his eyes when consuming the delectable bun. It had pink jam inside; and overall tasted pink - a gustation sensation suitable for celebration or jubilation but bringing consternation to fbb's companion and consolation for the subsequent eructation as he consumed it very quickly whilst running for a Heathrow Express train.

The Heathrow Express was available for travel at normal fares instead of rip-off because the Piccadilly Line was busted! Hence the reason for the visit. For the record the train was 15 minutes late into  Paddington on a 15 minute running time; giving a whole new meaning to the word "Express"!!

As Jordan was commuting to his emporium of sugary deliciousness (?) he spied a yellow update notice in the timetable frame at Meadowhell interchange. At first excited to see what was changing for his diurnal and dutiful commute ... 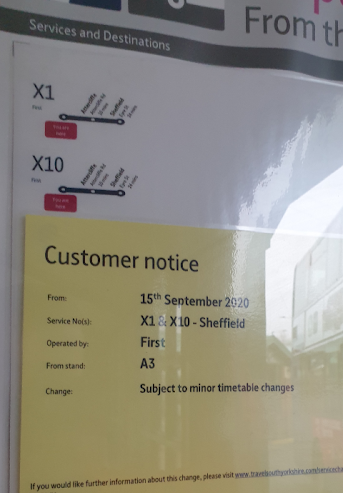 Jordan was disappointed to see that it referred to a change way back in 2020! There was another timetable change in January 2021 ...

... not mentioned in the frame.
And unbeknown to Jordan - indeed unbeknown to anyone in Sheffield it seems - another unreported change was due today. Even more galling is that as Jordan was reading the useless notice on Tuesday 2nd March, First bus was making an announcement to nobody in particular of things to come.
Dateline Thursday 4th March 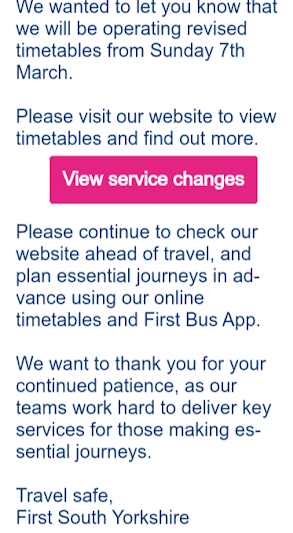 Many years ago, fbb registered for on-line updates from First in Stoke on Trent and since South Yorkshire joined the mega-wodge of "Midland" companies, the occasional message pops into the old man's in-box.
This was scary. Would your noble timetable updater be able to get these changes on to the GoTimetable Sheffield database in time. And how massive were the changes from yesterday, the 7th March?
Delving more deeply into First's over-engineered web site, fbb found these words of "wisdom".
We’re making some changes to our services from Sunday 7th March to provide more capacity for students making essential journeys to and from school.
On Sundays?
All services we operate alongside Stagecoach, 8, 24, 52a, 83 and 120 will remain unchanged.
So school kiddies don't travel on these routes?
The dedicated school services we operated before the new lockdown restrictions were imposed will be re-introduced, visit our schools page for more information > > >
Most of our other services will have revised timetables. You can view them on our forthcoming timetables page here > > >
So we have to search through the whole caboodle?
these timetables are the same ones that were in operation before the new lockdown restrictions, so any previous journeys for schools are maintained.
Could it be that, what is ACTUALLY happening is that timetables are reverting to the pre January 25th schedules when Saturday timing (plus extras) were brought in on Monday to Friday? Might it ACTUALLY be a simple as that?
Next area of search is a full list of every service operated by First in South Yorkshire - so we cast our weary eye over this list to see what is happening in Sheffield. Here is X1 and X10., for example.
X1 Sheffield - Meadowhall - Rotherham - Wickersley - Maltby
This service will run every 20 mins
X10 Meadowhall - Rotherham - Wickersley - Flanderwell - Maltby
This service will run every 30 mins
(extra journeys combine with the X1 service
to run every 10 mins from Meadowhall - Bramley)
This makes no sense whatsoever compared with the complicated published timetable. During the middle part of the day (off peak, but VERY off peak) here is the pattern.

The only thing that changes from today is, POSSIBLY, a few peak hour timings Monday to Friday.
If that is too fraught for your lockeddown and addled mind, let's try an easier one.
8 Ecclesfield - Sheffield - Birley - Crystal Peaks
8a Ecclesfield - Sheffield - Birley - Crystal Peaks
This service will run every 30 minutes combined (8/8a)
Correct. And this isn't changing at all; we have already been told that it runs "alongside" Stagecoach service 7 from Manor Top to to Wordsworth Avenue.
It's a joint service, innit!
Presumably Stagecoach don't want to change their bit, so First cannot change its share. Such is the joy of partnership. 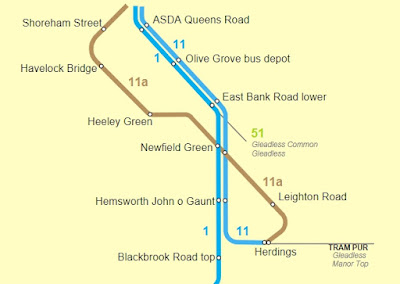 So, yes, there is a bus to Herdings every 7/8 minutes but via different and unconnected routes and, yes, at odd times of day there are buses which run between Herdings and Chapeltown via the 11 route but starting as an 11a "for operational reasons"; but designed to confuse the public - which the timetable does with consummate ease!

But, again, the changes from today apply to a few journeys at peak times only.
The whole thing from First is expertly designed to befuddle the already befuddled bus user with unnecessary information overkill.
First have posted very general notices on the buses, but nothing that gives you and real information worth having.
Here is a comment from Sheffield correspondent Jordan, he of Krispy Kreme fame.
Dateline Sunday 7th March
Notices on First buses plus their various social media platforms
However at 1530 hours on the 7th March the head of queue departure lists at the Interchange were showing the January times. This was, at least, better than the main lockdown when there was no information at all at the Interchange.
Also yesterday, fbb decided to check what the PTE (a k a Travel South Yorkshire) was saying about the changes from today.
On the home page:- NOTHING
On the "Virus" page:- 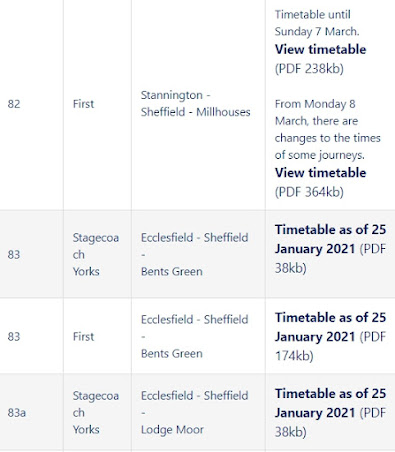 So all the user has to do is to compare old and new and work out whether his/her journey is still there or isn't. Very convenient. Helpful customer service in difficult times. NOT!!
The PTE set is not reliable, however. Here is their panel for the X74:- 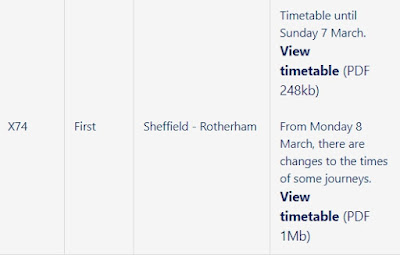 Spot the difference!
Note X on the GoTimetable extract reads; "continues to Rotherham via Magna Templeborough and Ickles."
Yet again, the poor people of Sheffield are being misinformed and left thoroughly confused.
We cannot be in the slightest bit surprised that passenger numbers have continued to decline, even before the current crisis and so the post-viral future must look very bleak indeed.
Will Stagecoach, First and/or the PTE be already planning a massive publicity campaign for post lockdown?
Guess!
But, never mind,
IT'S ALL ON LINE
Such a comfort!
Next Variety Blog : Tuesday 9th March
Posted by fatbusbloke at 02:00