The Show Must Go On

fbb has been to a few Model Railway shows and, frankly, they do get a bit samey. Steam era in the UK, diesel/electric era in the UK, country branch lines, urban and industrial all feature regularly. The modelling is usually excellent and makes fbb utterly depressed; he will never, in the span allotted to him, make anything as good as them.

But there are layouts that are "different" and worthy of further attention for just that reason. Yesterday your chubby blogger was "on duty" at the annual exhibition organised by the Thorncombe Rail Activities Club. 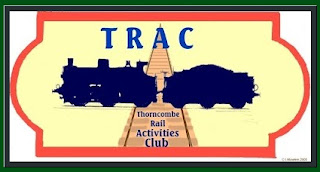 Here is another Hornby Dublo "heritage" layout, the toy train for the well off kid of the 50s and 60s. 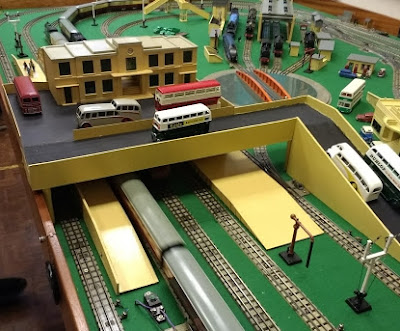 The station building has been modified but retaining the Dublo style. Trains rushed round at hugely unrealistic speeds but, the number of folk who stopped to watch was evidence of the eternal lure of nostalgia.

Did John Ronald Reuel Tolkien have a railway serving Hobbiton? No, of course he didn't - but this delightful model was an inspiring "what if". 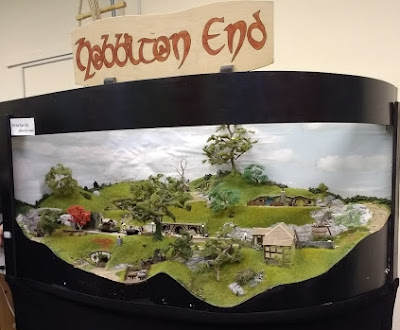 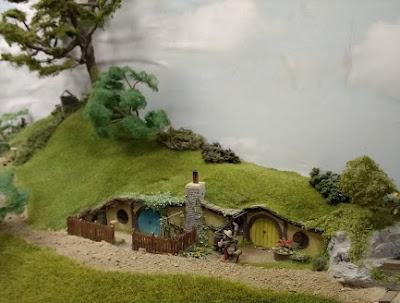 ... but cannot quite remember the appearance of the Minions in the original text or in the recent films.

Ian Walker's dock layout is small and perfectly formed. Cleverly, because docksides have been around for some time, a simple substitution of locos and wagons changes the era very effectively. Here is a modern scene with an "old" Airfix/Dapol crane ... 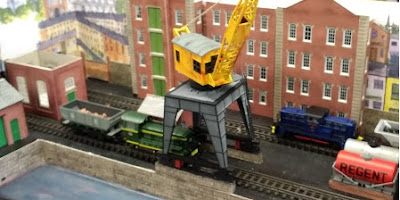 ... and on the other side of a scenic break was an older setting, also with a similar crane. 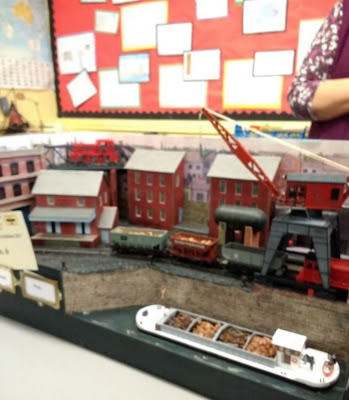 Underneath the crane's legs is an early Triang Dock Shunter in red. 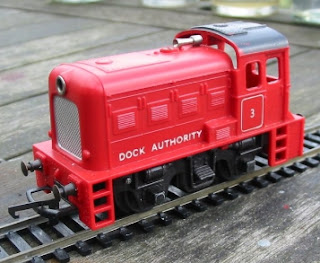 The loco on the (fake) bridge in the corner is a Triang clockwork diesel shunter. 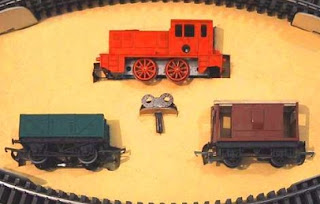 Now that IS nostalgia!

Probably, the most interesting layouts were those based on real places. Near fbb's dutiful seat at the receipt of custom was a "N" layout called Invernevis. It was based on the old Fort William Station, demolished to make way for a road and re-sited further north. 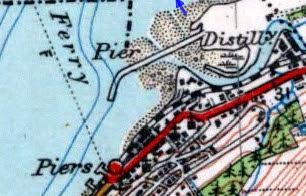 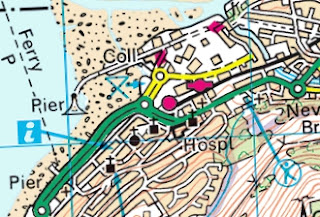 Here is the real former terminus ... 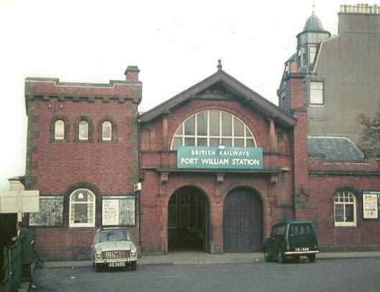 ... and its re-imagined Invernevis clone. 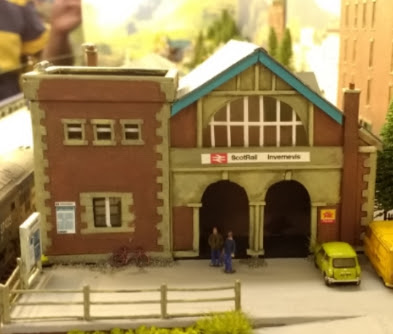 Those who want to be picky will point out that the windows are square in the model and arched in reality, but, as the owner told fbb, he could not get the arches right - and, anyway, the station does not pretend to be an exact copy. It is 2mm to the foot scale, so the model is only about 3½ inches tall.

fbb was recently on holiday at Instow (North Devon) and wrote about Barnstaple Town station, having previous "visited" the area via some Lynton an Barnstaple Railway blogs. 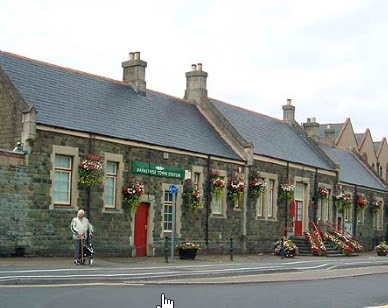 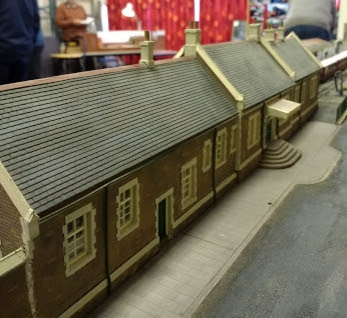 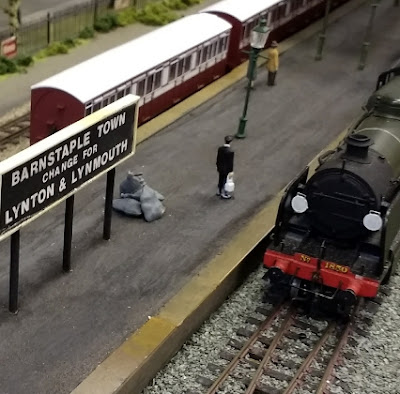 There was plenty more to see and some of the other "stuff" will lead fbb into future blogs about the real railway scene. But a few more bits and pieces can be fitted in here. 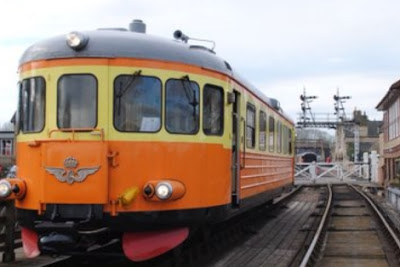 Join us on our Railcar Winter Specials
The Swedish Railcar departs Wansford
at 10:30, 11:50, 13:10  and 14:30
calling at all our stations
Heated Railcar
Licensed Trolley Service
for the sale of hot and cold drinks
and confectionery 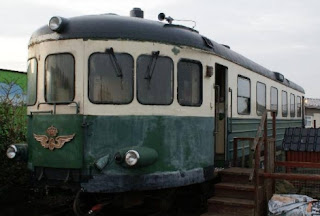 Beautifully restored, the Nene Valley Railway example is one of many once familiar in Sweden, often hauling freight/postal trailers and even running in multiple, 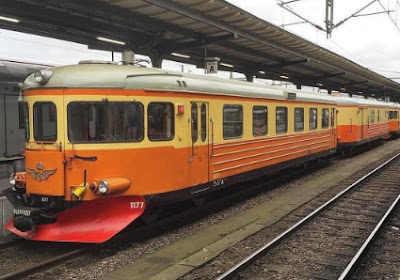 Something a little different for Christmas. 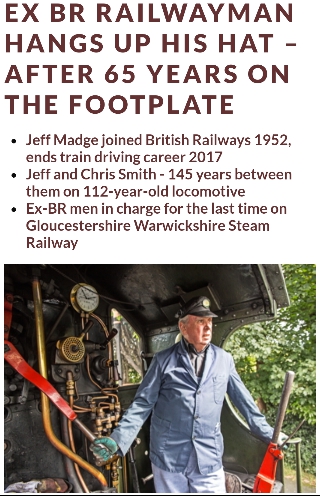 And Now A Puzzle To Solve
Like many of our readers, fbb is fascinated by advertisements involving trains and buses. If you have bleeding gums you had better use Corsodyl, mouthwash ... 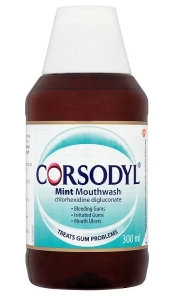 But where was the "journey" advert filmed. Was it a real train of CGI? 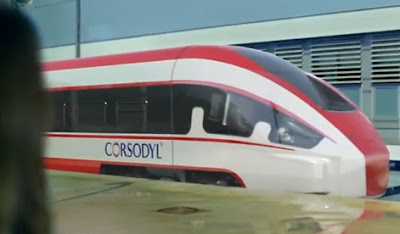 Info, please, via comments or to fbb@xephos.com