Strictly At The Station! 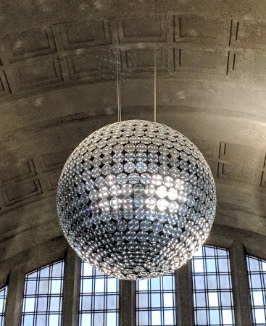 The third, and potentially the most challenging, teaser picture that No 3 Son sent to fbb from Basel was of a Strictly Come Dancing type of glitterball, although this one does not appear to spin. he full picture suggested that it might b part of the decoration of some public building. 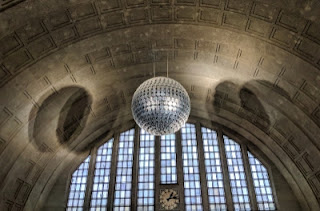 Might it be a station? Fortunately, yet again, The Google World Domination site came up trumps. Asking Deep Throat to seek out "Glitterball Basel" revealed that this particular jollity was not part of a Swiss version of the BBC's "Strictly Come Shrieking" but an appurtenance of Basel Bad Bahnhof. 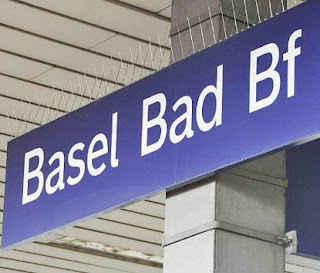 "Bad" means "bath" and is not a comment on the quality of the station buildings. 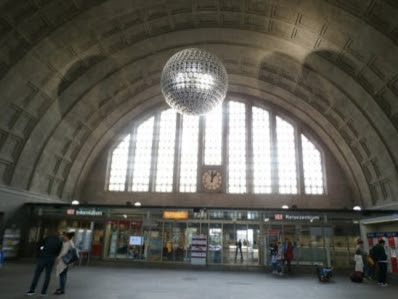 Teaser solved; three out of three to fbb!

But all is not quite as it seems at Basel Bad Station. The trouble with the Basel conurbation is that it spills over the borders with both France (left) and Germany (right). 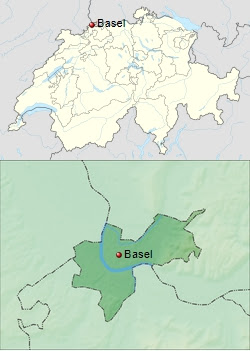 Wherever you go north and west you soon cross a border. Tramline 11 terminates at St Louis Grenze (= "border") where there is a turning loop. 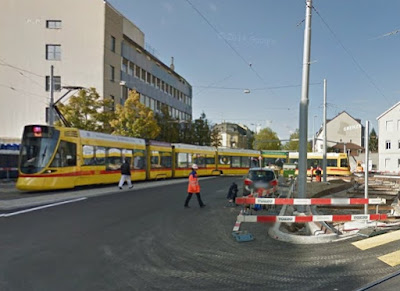 A few yards further along the road IS the border, this looking back from France towards the tram terminus. 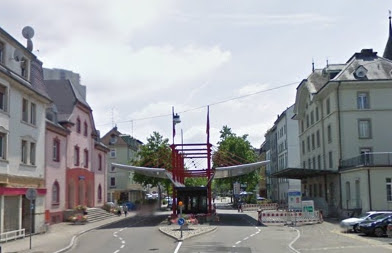 Whilst Switzerland is part of the Schengen area, allowing unrestricted travel for people, it is not part of the Customs Zone or the Euro Zone. So, were you to nip unimpeded across the border to the Hypermarkets in Mulhouse (in France, pronounced "mull ooze"), you could buy lots of stuff cheaper than in Basel itself BUT, in theory at least, you must pay customs duty on your return.

Of course, local people don't bother because they are rarely stopped, but the Swiss economy is suffering badly because of these trade-destroy-ing "imports"!

But beware if you live in Basel and order stuff on-line. The Post Office or Courier service is required to collect the tax. One horrified ex-pat reported thus in an on-line article.

For deliveries, as well as having to pay customs duty on second hand goods, you can be also be subject to higher charges depending on the courier service used.

“The customs broker is free to set the charges for a clearance, but prices generally vary between around 18 francs for the Swiss Post to more than 40 francs,” reveals an employee of AAS Freight, which charges 25 francs for its clearances.

The employee, who prefers to remain unnamed, adds that the Swiss Post charges an additional 13 francs if an inspection is ordered due to missing or incomplete customs documents, warning that certain online retailers do not provide the necessary tax tariffs – leaving the customer with yet more cost.

All these add-ons can push the charges up: I ordered an item from a major UK retailer to the value of £27, including shipping costs. One customs broker calculated it to have a ‘taxable goods value’ of 65 francs. This was based on VAT at eight per cent and the broker’s charges, amounting to a total import fee of 38 francs – that’s roughly the same as the item alone. ... nips smartly past the Border Post at Weil am Rhein. 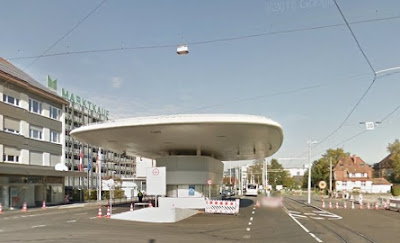 From here the route operates in Germany and is extended to the town's railway station. 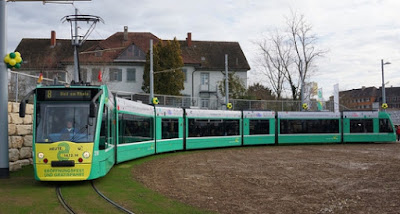 Do passengers from Weil am Rhein pay their fare in Euos or Swiss Francs.

Some line 10 trams terminate at the border, at Flüh ... 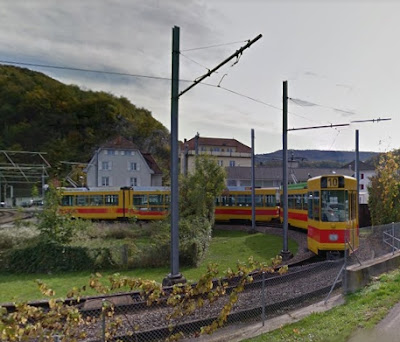 ... but others continue to Rodersdorf which involves running through a bit of France.

But here, out in the sticks, the borders are far less intrusive. 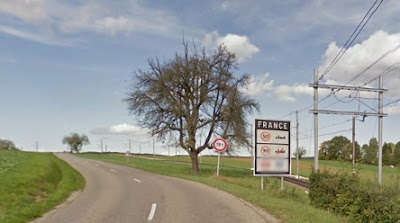 Tram 3 is being extended from the border to the airport ... 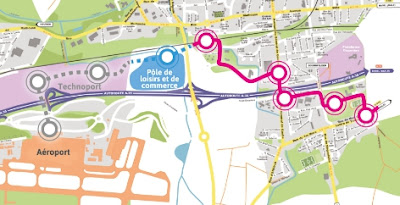 ... which is in France. If you arrive by plane you are segregated, like the Biblical sheep and goats ... 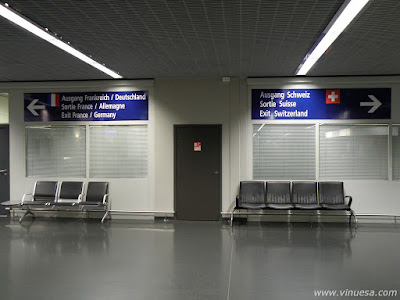 Some years ago, when fbb and Mrs were returning from a Great Rail Journeys holiday in Switzerland, they were obliged to change trains at Basel's main station. As the party left their arriving train, they were guided by a member of some member of a comic opera military group ... 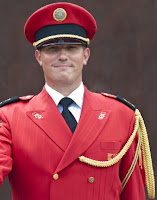 ... along the platform and towards a doorway which said "France". 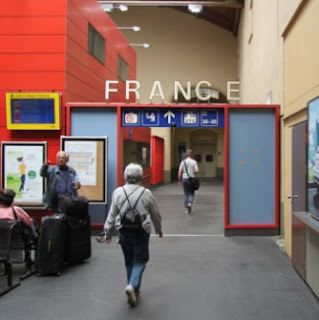 There were the usual customs posters ... 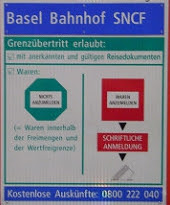 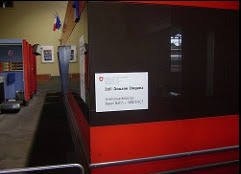 Eventually they reached their departure platform with about half an hour to wait for their onward train. Intrigued, fbb turned round, walked unimpeded back along the platforms, ignoring the route via Customs, and found himself where he had just arrived! (See "Passage West" on the modern station plan) 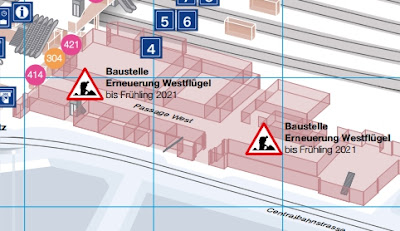 Had he illegally crossed back into Switzerland? Had he illegally walked into France? Was he now just a lost stateless passenger like the "hero" of Steven Spielberg's film "The Terminal"? 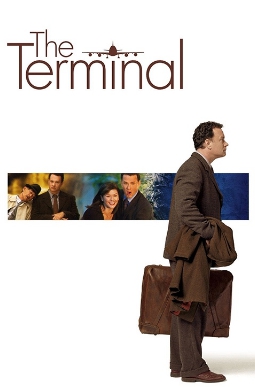 Suffering no obvious damage, he was able to return safely to dear old Blighty where his passport was "examined" by a very bored customs official - but with no redress for his potentially stateless expedition along the platforms of Basel station.

Which neatly takes us back to the Glitterball.

A few things to note.

There is no route 18. Its replacement is Wessex Bus service 10.

Route 77 is no longer operated by First.

X5 no longer serves Parkway Station and there is no X6A; it is X7.

Apart from that, says Paul, it was a helpful notice!