Wombling free...(see below)
Where could you ride on a genuine London Tube Train? 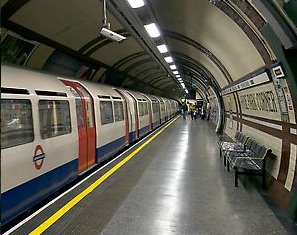 Where else?   Just as easy.  On the Isle of Wight, of course!   Between Ryde Pier Head and Shanklin.

Photographed in 1969, this is one of the original old  (in service in London from 1928) tube trains, made up into sets of seven cars with ex Southern Railway unit codes of 3VEC and 4TIS.  [or it might have been 4VEC and 3TIS?]   Vectis was the Roman name for the Island, probably a latin corruption of an prehistoric ruler called Weachta.   That's how you get from Vectis to Wight, Isle of.
In the very early days of electrification, trains ran every 12 minutes on Summer Saturdays to cope with the crowds.  Sadly the traditional Saturday "change-over" is almost gone; replaced by coach holidays, short breaks and the onslaught of the dreaded motor car. 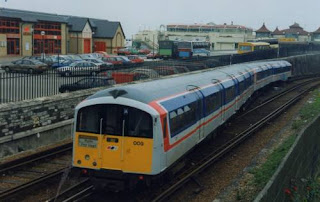 The new old tube trains (really up-to-date, starting their London life in 1939) originally ran in sets of 2 x 2, sporting Network SouthEast livery - very smart too.   Nowadays we have moved from this, through dinosaur trains ... 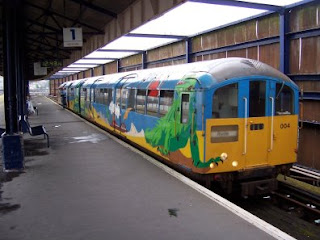 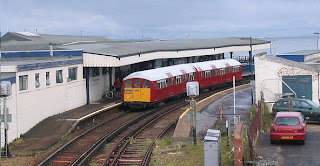 But now it is rare to see trains of more than two cars!  And there are only two trains an hour.   How the mighty have fallen; from 7 cars every 12 minutes to two cars twice an hour.  And because of "infrastructure limitations" - the two track section from Brading to Sandown was "rationalised" i.e. singled - they run at 20 and 40 minutes past the hour; absolutely ideal for connecting with ferries that sail every 30 minutes.  Grump grump!
OK, that was easy.   Now where else can you ride on a London underground train?   This is one of the cars showing Golders Green as its destination.   That, however, is a veritable puce pilchard! 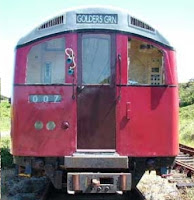 Still not sure - the answer is a little diesel hauled tourist line on Alderney, one of the Channel Islands.   "Not a lot of people know that," thanks Michael Caine. 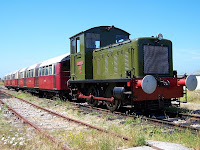 The coaches are hauled by a diesel loco and run approx 2 miles from Braye Road to Mannez Quarry, mostly along the coast.

Click on the map to view in larger size.

Two train trips run each afternoon, during the Summer, on Saturdays and Sundays.  On busy days this increases to three trips.  Not quite as busy as these coaches were when they lived underground in London!
For those who may have lost touch with their childhood - unlike fbb who is in his second ... "Undergound, overground, wombling free..." are the opening words of the signature song to TV's version of Elisabeth Beresford's Womble stories.
Incidentally, Madame Cholet, the Wombles' cook, had an assistant called ... 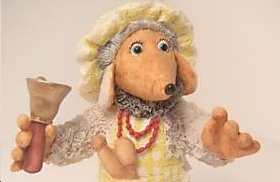 Madame Cholet WITHOUT her assistant