Miscellaneous Mapping Mutterings 1 (read again) contained a clip from the July 1927 map produced by Sheffield Tramways and Motors.  It showed only ST&M services in red added to a Bartholomew's engraved map of the city and its environs.
Astoundingly, in the punctilious days of A.R. Fearnley, ... 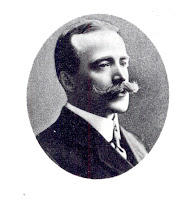 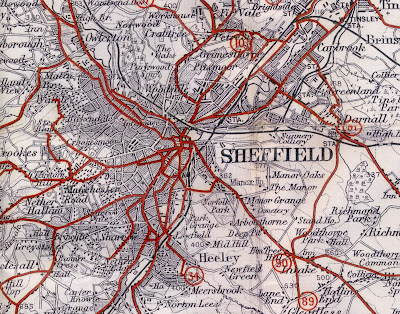 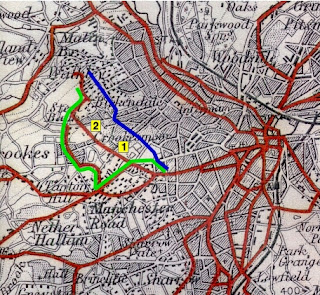 ... we see that things are somewhat wrong.   The Crookes tram (original red line) is shown as finishing well short of the Heavygate Road terminus (green line); and, as for the Walkley tram ...
The 1927 red line passes southwest of the ponds which formed the present Crookes Valley Park [1]  continuing along Northumberland Road [1], Conduit Road and Western Road [2], then via Heavygate Road to a terminus on Bole Hill Road.  To the best of fbb's fading knowledge neither tram nor bus has ever passed this way before or since!
The correct route is shown in blue via Crookes Valley Road (northeast of the aforementioned ponds), Barber Road and Commonside to a terminus in South Road as this rather aged picture from 1905 shows. 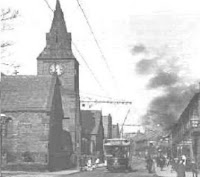 How could ARF's minions make such a blunder?   One possible explanation lies with inaccuracies in the original Bartholomew engraving.  It was always easier to engrave completely new roads than fill and re-engrave the more complicated existing bits.   Keen Sheffielders will espy the new Prince of Wales Road snaking through empty country to the east of the City Centre.   But the thick plottens!

Another map appears in Charles Hall's definitve history of Sheffield Transport ALSO dated in 1927 - this time with the month June added.  And this time the tram routes to Crookes and Walkley (thin lines with bobs on the end) are correct!   Inconsistency rules OK; even under the tutelage of the great ARF. 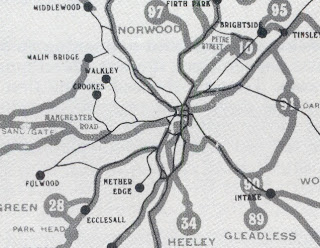 fbb and his chums are unable to fathom which map came first, the Bartholomew one with incorrect routes or the more diagrammatic with correct routes. If the month shown is correct then the worst did not come first.

Perhaps, as a good friend opined, the official line then was "if it's on the engraving it must be right" as, similarly today, we are offered the explanation "well, that's what the computer says".   At least we now know that the celebrated A R Fearnley's team wasn't always perfect.   That may give a little comfort to his 21st century successors. 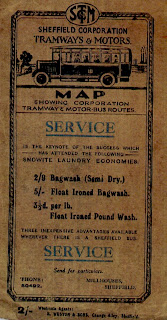 As a P.S.: the map retailed at 2/- [10p] which was the equivalent of about £12.50 in today's money.   It was probably well beyond the reach of the majority of the company's customers.   A bagwash wasn't that cheap either!
Posted by fatbusbloke at 03:00