Or is that "More Misery"?

Maesgeirchen?   A huge housing estate of approx 4000 inhabitants at Bangor, North Wales.   Building work began in the 30s and continued post World War II with modern additions and improvements.  The suburb is separated from the town centre itself by Bangor Mountain criss-crossed by footpaths and "short cuts". 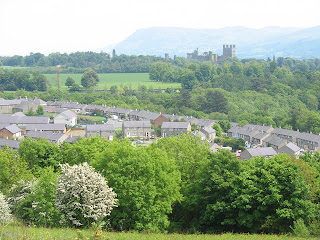 Arriva was the sole provider of buses to the estate until the arrival of Padarn Bus; which began to compete with the incumbent operator at the request of residents who expressed "some dissatisfaction" with Arriva's quality of service!
Both companies run every 15 minutes and, outwardly, the Arriva timetable appears the essence of simplicity.

Caveat emptor!   According to the sainted Traveline, some of these buses follow a different route between Bangor and the estate, and, furthermore, miss out a huge chunk of roads each evening and on Sundays. Arriva's timetable remains solidly silent on this matter, especially galling if you live on the roads "missed out".   Perhaps Traveline is out of date - it has been known, no, really! - but Arriva's quoted times do match those of Traveline exactly.  The timetable provided by Gwynedd Council is similarly more complex than Arriva's own offering.

So which is right?   You pays your money (or maybe you don't 'cos the bus went a different way and you missed it!!)

Arriva's leaflet map (also downloadable) hints at the alternatives in Bangor but is coyly secretive about the bits of missing service in Maesgeirchen itself. 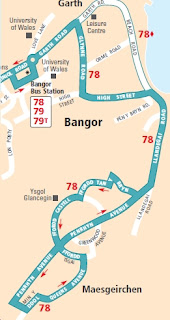 The missing bit is the top "wiggle" (via Ysgol Glancegin or Glancegin School if you are unfamiliar with the local lingo) on the estate with buses running straight down Penrhyn Avenue to loop round the lower "wiggle".

The Padarn bus map is as elegant in its simplicity as it is astounding in its lack of information!

Now the unwary traveller might suppose that the Padarn buses to Maesgeirchen are numbered 71 as the "helpful" map implies.   Silly, silly traveller!    The frequency is every 15 minutes but buses may be numbered 71, 75 or 79!    The one advantage of the three different numbers is that the rider can, with local knowledge and experience, catch the right variation according to route and destination in the Bangor area.   But not knowing this secret piece of trivia may lead to unnecessary waits at Bangor Cloc.   [for those not steeped in the Welsh language, "cloc" means "clock".]

But there are still a few snags.

Padarn doesn't seem to have a service 75!   Well it does!   Because, if you click on 71, you get a timetable of all three services' combined 15 minute frequency to Maesgeirchen, and the 79 button reveals the missing 75 combined with the 79!   Now you would have guessed that, happy Gwynedd visitor, wouldn't you?

Traveline recognises the 75 as well but its downloadable full timetable runs to 16 pages of PDF files, sometimes combining 75 & 79, sometimes showing them separately.   Not helpful.

But what, I hear you cry, about Gwynedd county's website?   Hey it's good - with a full list of timetables in route number order.   fbb gives it seven out of ten.   Why not 10/10 if it's that good?

It's not easy being green!

And an amusing P.S.   Have a look at the map of Padarn's service 71, courtesy of the always-efficient Traveline.  (?)  Note particularly the line of motorway straightness across Bangor Mountain and the St Deiniol Golf Course, presumably served by Padarn's popular service of powered golf carts!   Such is the consequence of computer generated information.    Just to confirm, there is no such road - well done Traveline! 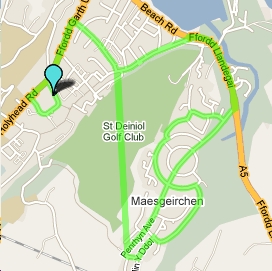 fbb's tip for better blog reading.  For those new to the bloggershpere (?); the gubbins that runs this blog site takes the pictures, scanned maps etc and makes them fit the space available.   For more detail just click on the image and you will get the original as imported by fbb; often bigger.  Useful, for example, if a map or timetable is too small to read on screen.
Posted by fatbusbloke at 09:59