The "main man" was Professor Eric Laithwaite.   fbb watched his Royal Institution Christmas Lectures on TV in 1966 and 1974.   His interests were wide-ranging but included Gyroscopes and Linear Motors.   He was regarded as a bit of a maverick and his work on gyroscopes was rejected by the scientific glitterati.   He died in November 1997.

His contribution to public transport was to refine and develop the idea of linear motors combined with magnetic levitation.   This is a bit technical, but the levitation bit is easy - the train, carriage or whatever, "floats" on a magnetic field.

To imagine a linear motor, try to think of a conventional electric motor opened up and flattened out.   So, instead of spinning round, the motor drags the "thing" along lengthways; the track becomes the equivalent of the normal motor's armature.   No wheels, no friction, thus high speed!  Here endeth the physics lesson.

This is Eric's first demonstration model  ... 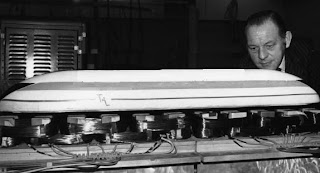 Initially the magnets were part of the track, dragging the carriage along, but this was later refined by placing the magnets on the car which then dragged itself along a metal beam that formed part of the track.
Meanwhile Monsieur Jean Bertin (France, 1917 to 1975) ...

... was developing a high speed train, supported, not by magnetism, but by hovercraft technology. 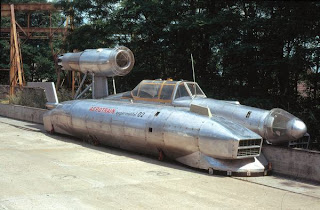 However, prototype S44 (built in 1969) was powered by a linear motor rather than the aircraft engines of the earlier "attempts".   A full-size test track was built and all looked good for its future in France, ooh la la!   This is the only reasonable picture of S44 after it was terminally damaged by fire in 1992. 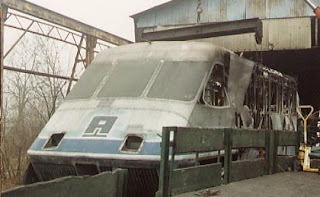 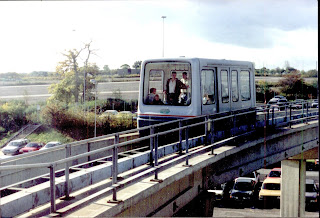 The system was closed in 2005 because of increasing unreliability.   One car is in the Railway Museum at York and the other was sold on ebay in December 2010 for £25,100.   Meanwhile, as is so often the case, technical development moved to China where a swish high speed maglev links Shanghai with its Pudong International Airport. 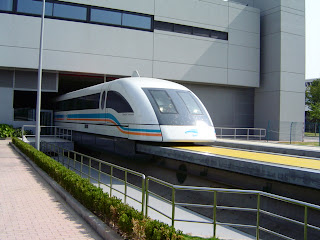 The line is 30km long, the journey takes 7 minutes and 20 seconds and the trains travel at 431 kph (that's those funny foreign kilometres per hour, 250 mph in real money).  Eric Laithwaite would have been impressed.

Pennies seem to be the problem.   The track is, by definition, expensive and speeds big enough for most of us can be achieved on conventional track.   And the system is no more "green" than a standard electrically powered train.

The Birmingham maglev track lay disused for some time - replaced by a boring bus service.   But now that track has been refurbished and the new trains are dragged along by a piece of string.  [OK a steel cable, but that's only thick strong string - and very old-style technology!] 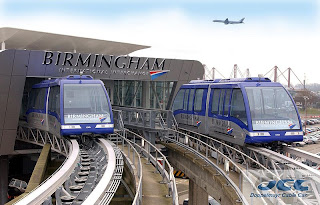 Just came across this very tiny pic of the S44 Bertin Aerotrain (the only version with a Laithwaite linear motor!) in near pristine condition - enlarged as much as we dare.