Ave RV! In praise of a bus route.


Transport for London's journey planner [www.tfl.gov.uk] is often upheld as the acme of jp technology - almost certainly by those who don't have to use it for anything other than very simple journeys.
Consider a journey from Covent Garden to the Tower of London.   This is what tfl tells you to do ... 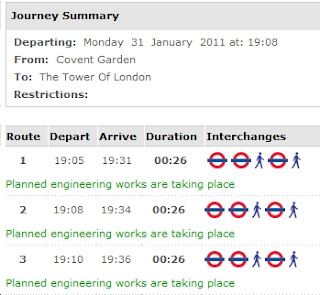 ...take a three leg Underground journey with two bits of walking, including the lengthy and complex link between Bank and Monument stations - once shown on Underground maps as an "escalator link"; but now masquerading as a "normal" interchange.

Now, a question - actually THREE questions.
As the man says on the antiques programme, "is that the very best you can do?"
Which would you, interested blog reader, prefer?   A three legged troglodite trundle through the dismal depths of Londons "Tube" or, alternatively, a ride on a nice red bus?   If you are a pass-holding OAP there's no contest; the bus is free whereas the underground costs £4. [cheaper with "Oyster"].
Covent Garden to the Tower is a pleasant one bus ride, seemingly overlooked by the much lauded tfl journey planner.   Here is the offer from xephos:-

This is route RV1, started in 2002, designed to regenerate and rejuvenate the developing tourist and residential areas south of the Thames.   Just one simple bus ride and no changes! 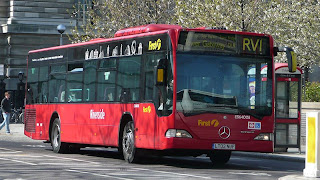 According to tfl, the underground route is quicker - 4 minutes quicker and perhaps open to debate - and that's why its algorithms put the RV1 into the background.   fbb understands that the internal gubbins of xephos strives to keep the client on the one vehicle unless such a policy would create a really slow journey.   Almost inevitably a one leg journey will be cheaper as well.

A further bonus of the RV1 is a possibility that you might be riding on a vehicle powered by hydrogen.   Now, some of us "oldies" might have visions of a small thermonuclear weapon concealed in the engine compartment; but we are talking hydrogen gas here, probably the cleanest fuel possible.   If you remember your chemistry lessons (?) you might also remember that hydrogen and oxygen combine to produce energy and a little water residue.   The energy in the Hydrogen bus is in the form of electricty which drives standard electric motors. No stinkypoos from the exhaust pipe and no expensive technology to clean up the particulates - whatever they are! 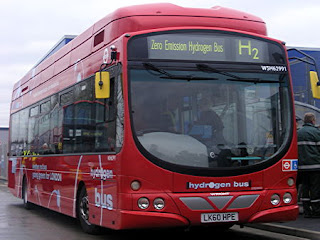 Two thoughts remain.  At the moment the buses are astronomically expensive - will they ever become cost-effective?   And some are worried about the safety of such a volatile fuel, say in an accident; what happens if it escapes from its storage pods on the roof of the vehicle?   We are assured that "all is safely gathered in", but ...

... The Hindenburg was full of hydrogen!

Occasional bloggers and those "new to the trade" may not be aware that you can cross reference earlier blogs on similar topics by clicking on one of the "labels" below and at the foot of each blog.  Enjoy your reading!
Posted by fatbusbloke at 15:07