How to save Money! 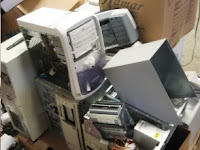 For the uninitiated, the "registration" is the legal document submitted to the Traffic Commissioners and containing details of your bus service proposals or alterations.

In the "good old days" the Commissioners held public enquiries where anyone could put forward an objection to the proposals.   This was, in effect, a device to prevent wasteful competition as the incumbent operator could object on the grounds that the incoming service was "unnecessary".   What a good idea!  But since deregulation in 1986 the Traffic Commissioners are little more than an expensive filing cabinet.

Now, of course, as in all things trendy and modern, you may submit your registration on-line.


"This is the report on implementing the paperless office."

fbb has been looking at a recent registration he received in connection with his minimalist employment.  Whereas the paper document consisted of approx four pages, the on-line version often works out at a minimum of three times that - and you begin with a contents list. 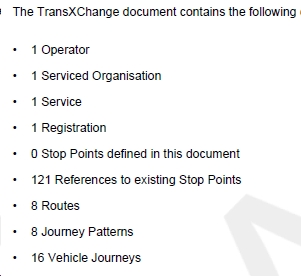 This list doesn't seem to bear much relationship to what the contents actually are, as we shall see in due course.   Then follows basic details of what it is you are registering:-

Most of this glurp is repeated two or three times in other boxes on other pages - but in a slightly  different form.   Also note that the period of operation of this particular "event" is from 3rd April to 3rd April.   Keep that snippet in mind!

fbb has no idea what this is for or what it means.    And there follows, in this case, THREE pages listing every stop served.

Note the lengthy stop reference number on the left - 12 digits.   12 digits is space enough for one less than 1000 billion stops - 999,999,999,999 to be precise.   Ready for expansion or information overkill?   What's wrong with an eight figure ordnance survey grid reference - they're needed anyway for journey planner technology?    But that's what happens when you put things in the hands of computer geeks - anything to add complexity.

Another mystery.   What is so important between Andover and Marlborough that it needs listing EIGHT times?

And it's good to know that the document was created, modified AND new; all on the same day.  I am sure that such information is really, really helpful.   Sadly we are not told what the compiler of the submission had for breakfast, but it's only a matter of time: Nor do we know his mother's maiden name - another worrying omission from the form.

For a new service, the registration also needs to record any turning manoeuvres, type of vehicle (bus? skateboard? jump jet?) and include a detailed map and a full timetable.   fbb has received copies of registrations 25 pages in length.

Incidentally, the registration here reviewed is to CANCEL a service!  Showing a real concern for economy of time and money, it only took SEVEN pages of "stuff" to register this cancellation.  [and, if the document is correct, which it probably isn't, to cancel it for one day, namely 3rd April.]

Now, although this is all for electronic registration, there are still numerous occasions when a paper copy is useful or even necessary.  Even if paper could be avoided, some faceless minion has to input all this stuff - and presumably check it and input it again when the infuriating confuser (sic!) belches loudly and refuses to accept it. 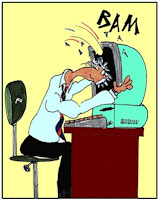 So, Department of Transport / H M Government / Mr Cleggeron:- throw away your computers, buy a nice tin filing cabinet for the registrations and go back to one (for cancellation) and four (for new or revised services) sheets of this amazing and technologically advanced stuff called "paper".   You could also probably delete this duty from the onerous responsibilities of the Commissioners.  Hurrah! there goes another piece of QUANGO.

What a relief!
fbb, and the whole world, can sleep soundly in their beds tonight.   Zzzzzzzz.