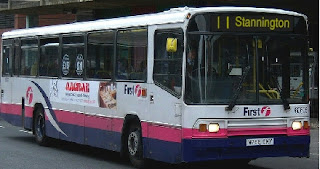 
How does TSY guide prospective travellers to Stannington?   Typing "Stannington" into the "Timetables" box on the TSY web site reveals five entries.   Oddly, but typical of technology taking charge instead of common sense, one clickable line offers all bus services  in Sheffield - but we actually only wanted buses to Stannington   Two of the others are for services from Hillsborough, and one from Malin Bridge so it appears that the 11/11A/12 group is "where it's at, man". 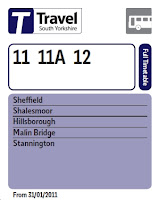 We are getting there.   The 11, 11A and 12 all run to Stannington, it would appear.   And there are maps!   A huge improvement on the rudimentary one line diagrams commented upon before ...

These efforts, derived from a piece of  (presumably expensive) software by a Swedish firm called Kartor, are geographically accurate but carry no road names and only rudimentary stop information.  They are, in effect, not much better than a wiggly version of the former straight line offering.   Disappointing.   Also ignored; (a) is the fact that the 11A is an evenings and Sundays only portmanteau route and (b) the Acorn Drive "loop" is only served by half the buses on Mondays to Fridays.
Or, you could, perhaps, find the competing service, the Supertram Link 2 from Malin Bridge tram stop and running via a different route around Stannington.   It's not easy to find; are you looking for 2, SL2, STL2, S2 or ST2?  But on that leaflet you don't get a map at all - nothing other than a list of roads with Stannington itself shown in the wrong place!

So go away and work it out for yourself!   And if you get off at SYT's "Stannington" you'll have a good mile to walk before you get to anyone else's "Stannington".
TSY does publish area books - referred to earlier with reference to Totley - or more correctly DID publish area books.   It has been decided not to continue these.   No wonder, because this is the best "map" that can be offered therein of the Stannington routes:-

Obviously out-of-date (no Supertram Link) but about as helpful as a chocolate teapot!  No replacement is planned, so we are stuck with fragmented and inconsistent information.

Also available, at SOME city centre stops, are so-called "spider" diagrams of services departing from that point.  fbb has no record of the "Spider at Snig Hill" (sounds like a title of a Hammer Horror Movie) but the bits of the spiders' web are usually presented in route number order with absolutely no reference to geography.   This is fbb's guess as to what one for the Snig Hill stop might look like. 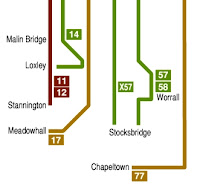 Not much help there, then.

As a final struggle for useful information, the harassed visitor to the City of Steel might well arrive at the bus station - sorry "Interchange" - and seek a map showing the buses to Stannington.   Here's a snippet of what he might find: 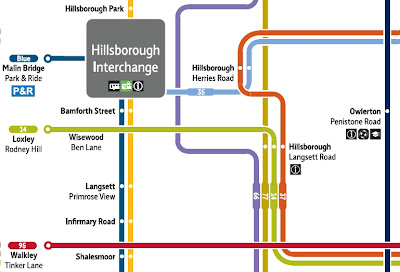 Another lovely "spider" map, but there's NO Stannington!   That's because the services to Stannington don't use the bus station.   But the map itself demands a closer examination; and then provokes the comment, "are they having a laugh?"

Assuming, speculatively, that "North" is conventionally at the top of the map, then reality differs signifiantly from this diagram:-

And why is the tram there anyway?   Like the Stannington routes, the trams do NOT serve the bus station and involve a reasonable totter to the city centre.   But, apparently, you can't totter to the 11, 11A or 12!
fbb has exchanged emails with TSY and even travelled to Sheffield - at his own expense - for  a meeting with the department concerned.  Recently he has been told by the Director General (the big cheese himself; but electronically, so maybe actually from a "minion"?) that TSY always strives for accuracy and is committed to providing the public with the best and most accurate information possible.  (!??)  fbb has offered his system-wide map (for a very small consideration) to TSY and offered to train staff to keep it up to date.
Consequence: a friendly felicitious fobb-off!