Part 2 - the Truth is Out There


We left our tale of cartographic complication with the South Yorkshire PTE maps of the early eighties - maps which died a death in response to the turmoil of deregulation of the bus industry in 1986.

It is nearly 25 years later, so what is available now?  Of course, solid, reliable and traditional Ordnance Survey produces its world famous 1:50,000 Landranger series of maps, characterised by their pink covers; descendants of the once-standard "one inch" maps.   But these do not show public transport. 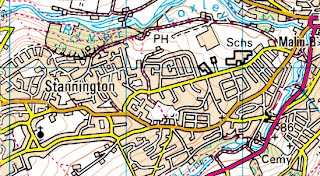 Services on-line like Google Maps go one better; they include bus stops and links to timetables.  But here is no actual route information. Indeed to get the bus stops on screen you need to use a big enlargement which would make adding routes rather pointless. 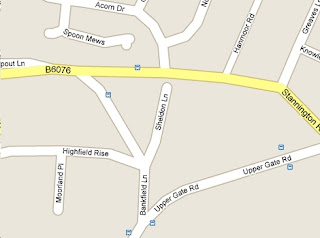 The associated satellite view can give some further geographical clues; showing whether you are in urban our country areas, for example.   And if you are fortunate enough to know the route, then recognising individual stops is possible with care.   The impressive Google Street View will identify local landmarks, so you can spot where to get off IF you have the privilege of  trendy modern mobile phone.

But what about public-transport-specific mapping services?   Transport Defunct (aka Transport Direct) follows the same style as Google - you can have stops but not routes; whereas most Traveline regions offer stops AND routes - although the route lines can be a little crude as here for Stannington on the Traveline Yorkshire site... 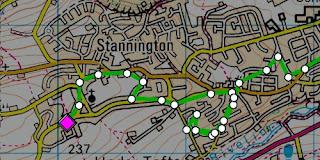 Again, there is no information about route NUMBERS on the map although the diagrams are linked to small chunks of timetable.   It's a start, but nothing more.

So far, then, we have yet to find a usable map of ALL bus routes in Sheffield.  A newcomer to the city may want to plan a journey to meet a friend; or a potential house buyer might want to know what sort of public transport provision is available.   We must keep searching!
Since November 2010, Worst Bus (sorry, fbb keeps typing that incorrectly, must be some subconscious urge!) and Stagecoach have been competing on the Stannington route.  Needless to say, each produces a very useful map, but in each case totally ignoring the services of the other.   First, First ...

... which, for example, ignores the tram at Malin Bridge 'cos that's run by St*g*c**ch and we don't admit to their existence.   Then, we have the offering from that Perth based conglomerate ...

... which is actually easier to follow but, of course, ignores the routes of its Aberdonian compatriot.   Of the two, Stagecoach is much the "cleaner" design.   Less helpful, in fact not helpful at all, is First's "Overground" map.

All the disadvantages of the First network map (see above) compounded by poor representation of geographical truth.   So that's all, company-wise.

Even the key enthusiast web site at www.sy-transport.co.uk can only manage a less than satisfactory "spider" which ignores the trams.   They, apparently, deserve a separate map.

Note, in particular, the pink loop (Supertram Link) via Stannington, the diversions via Deer Park Road but no loops via Acorn Drive.  [Stannington is shown top left]

Modesty forbids mention of the only map (currently) to incorporate all buses and trams in Sheffield ...

... but it is a "thing of beauty and a joy for ever".  [John Keats, "Endymion" - for those of a literary bent.]
With competing, but slightly different, services and a growing number of  route gyrations, the simplicity of the 1960s and 1980s maps is gone for ever.   But the map produced by fbb, that shrinking violet of public transport opinion, is simply not available in printed form.  [Up-to-date on-line version available here.]
So, faced with the paucity of properly published paper-based provision, one would expect the guardians of all things omnibological (?) and ferro-equinological, Travel South Yorkshire, to publish the definitive network map.
Episode three of the thrilling saga will reveal all...
Bet you can't wait!
Posted by fatbusbloke at 08:46