A Piece of Pointless Trivia. [decimal point IS mentioned!]
A search through fbb's eclectic and chaotic collection of public transport ephemera, in connection with his Mapping Muttering blogs, revealed a short lived service to the Stannington area of Sheffield:-

The 888 was hourly and additional to the frequent 88 which, in the early 80s, stopped short of the new Hall Park Head estate and future terminus of the present service 12.   Although Sheffield Transport (and later, the PTE) had used 500s for limited stop longer distance services, 700s for early morning routes and 900s for late night offerings, 888 was by far the highest route number used for a "normal" Monday to Saturday service withing the City of Sheffield..
Which ignites a train of thought... [can you ignite a train?]
Which bus company routinely used the highest route numbers?
Bus companies operating over huge areas had big numbers; Midland Red and the historically huge United empire are clear front runners.  Many of these "biggies" remain; as here with Yorkshire Coastliner's 840 group (descended from the original United via West Yorkshire). 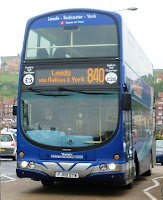 Greater Manchester and West Midlands have plenty of all-day services in the 600s ... 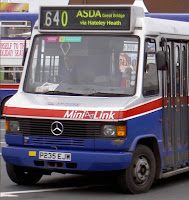 ... but the highest ever number recorded in the late lamented Great Britain Bus Timetable was 2000 (!) for a little local route on the Derbyshire Nottinghamshire border.  fbb can find no tangible evidence despite trawling through back numbers of GBBTT, but it was there, honest.
With privatisation and fragmentation of the old big-area operators many services had their "hundreds" removed. There is a perception in the industry that Jo Public reacts more positively to smaller route numbers.   Is that really true?   Dunno!
Trent Barton is the high priest of weird route numbers and names with a recent craze being for numbers with decimal points.  In most cases these are the "old" 93, for example, mysteriously numbered 9.3 (nine point three).   Here is a 7.1 waiting in Derby. 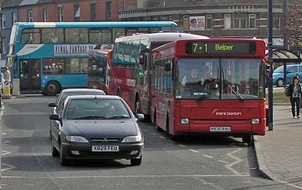 Which leads us to the LOWEST route number ever.
fbb's suggestion for this prize winner is the route 000, operated by Sheffield Transport from about noon to the end of normal service on 8th October 1960.   "But, why?", we hear you cry! 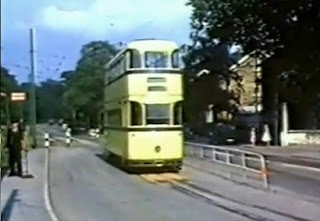 That illustrious date marked the end of Sheffield's original tram service.   [picture above of a tram at Beauchief; last days of operation] There was a grand parade on the Saturday afternoon so the 000 ran from Tinsley to Beauchief until the new services took over on Sunday 9th. 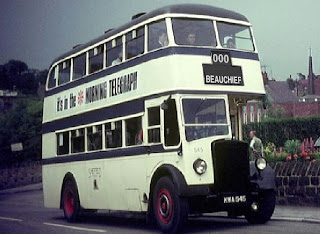 And you probably guessed - the above is NOT a genuine photo of the 000, but a computer generated fudge by fbb!   But they did look like this - - - a bit!
Posted by fatbusbloke at 11:04