How to Ruin a Bus Service (Lesson 1)

... make it hard to remember! [miniblog]
From 23rd January, the universally popular First Bus is to revise its service 63 between Havant and Fareham.   For many years this has provided a useful link running at an hourly frequency.   The present timetable continues this practice. 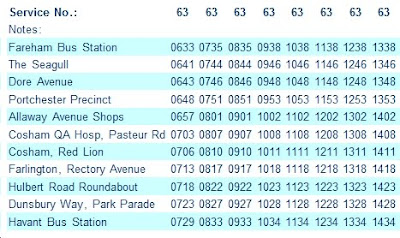 In recent years, however, the Saturday service has been significantly less frequent.   But now, from January 23rd, the Monday to Friday service is to be reduced.   Perhaps to every two hours off peak?   Not so - reduced to what would appear to be an arbitrary selection of journeys at particularly non-memorable and non-repeating times!

Note that there is now no journey for folk to arrive in Havant at a reasonable time to start work at 0900.
Another part of the "how to ruin a bus service" technique is, simply, not to tell anyone that the change is happening.   Checking on the "forthcoming timetables" on First Hampshire's web pages reveals changes in Southampton and Portsmouth due on 30th January but not a dicky bird about the 63 scheduled to be mangled a full week earlier.  [STOP PRESS : revised 63 is now "forthcoming", at last!]
To further discourage passengers; service 63 (which runs from and to Fareham, remember?) is NOT in the First Bus Fareham timetable booklet.   Maybe it it were included, people might travel on it and we wouldn't want that, would we?
If (and it's a big "if") you can delve into the subterranean depths of Hampshire's web site, you can download the "current" (sic!) Havant timetable booklet - which starts on January 23rd and includes the 63 change.
Way back in Autumn 2010, Mr Tim O'Toole, the new CEO of First Group, bravely announced a moratorium on timetable reductions.   Hmm.   Maybe someone should tell him about the 63?
Meanwhile, enjoy a nice piccy of a 63 at Fareham Bus Station.   Catch one while you can - it might not last long! 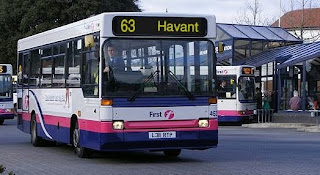