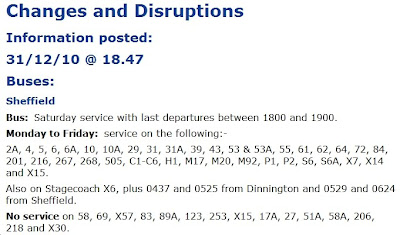 Note that this info was posted at 1847 on New Year's Eve.   As the post was late in the day, are we to presume that it refers to New Year's DAY services?   Or New Year's EVE services?   You pays your money ...

Elsewhere on the SYT site you can download a vast and fairly confusing festive season leaflet which quite clearly (well, fairly clearly) opines that, on New Year's DAY, a special timetable will be provided on selected services; financially supported by Sheffield City Council and operated solely by Stagecoach.   So the above post is a belated offer (or a late correction) for New Year's EVE services.   Belated is the right word as the post was timed barely 15 minutes before the departure of the last buses of the day.

This can be confirmed by visits to web sites as shown below; first First:-

So far, so good.   The mysterious post must, therefore, refer retrospectively (helpful, eh?) to New Year's EVE and there was no post for New Year's DAY!    But, look closer befuddled friends, and wonder... 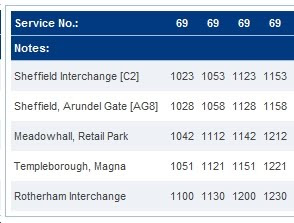 First's Saturday service on the 69 - every 30 minutes, as advertised on their web site.   Now look at the last couple of lines on the "Changes" page ...

So, was there, or wasn't there a service between Sheffield and Rotherham on New Year's Eve?   Answers, please, together with a crisp £20 note, to "fat bus bloke; care of the confused bus travellers therapy retreat, somewhere quiet and far away from Sheffield"!   The same, incidentally, applied to service 123 - Saturday service finishing early, according to the Stagecoach web site, but no service according to SYT!

But good news, folks!   There was a Monday to Friday service on lots of routes as listed above and enlarged below... 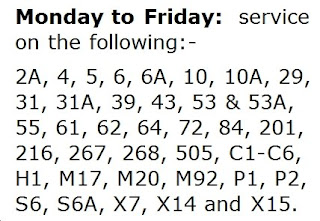 Great news for the (occasional) users of C1 to C6 buses to Tesco at Millhouses!   C1 and C4 (normally Wednesdays and Fridays only), C2 and C3 (Mondays and Thursdays), C5 and C6 (Tuesdays) were ALL running on Friday - New Years EVE!   Wowee!

And the 43 - is that the 43 to Jordanthorpe or the 43 to Chesterfield? - was running; as was the 53 to Low Edges - or it might have been the 53 to Mansfield.   All these routes running to a normal Monday to Friday service and thus right through to late evening in some cases.   The X7, normally a peak hour "commuter" service from and to Maltby was conveying a happy band of workers to their overtime in Sheffield on Friday, New Year's Eve.   Hmmm, maybe?

As Victor Meldrew said, often; and with vigour ...

Dear Mr Brown - director of South Yorkshire Passenger Transport Executive - does anyone check this information?   Does anyone use this web site?  fbb is (like Dickens' Mr Barkiss) "ready and willing" to sort it out.

Oh, yes!   A Happy New Year to our reader; hope you're not still stuck at Gleadless, waiting for the Saturday version of the 2A!

P.S.  Just in case you feel that fbb was being a bit picky - perish the thought - herewith tram information from the Stagecoach web site:- 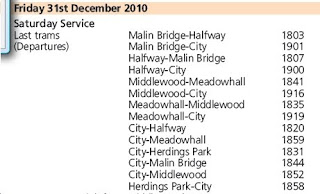 Your opinion Mr Meldrew?  "I still don't believe it!"