Part I - a history lesson. 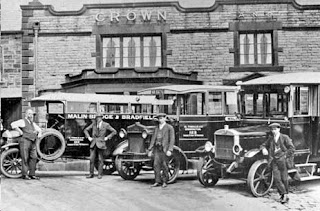 Mr Thrales was something of an entrepreneur; as well as being the landlord of the Crown and Cushion at Stannington, near Sheffield, he was also a modern-day Brian Souter - running buses from the tram terminus at Malin Bridge to Stannington and nearby Bradfield. 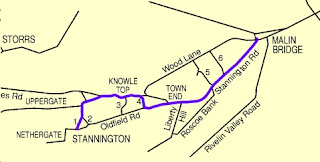 His service was in operation by 1922 and was joined by (and subsequently taken over by) Sheffield Tramways and Motors [ST&M] in October 1930.   So this 1927 ST&M map shows no service to Stannington because they did not operate it!   Nothing changes!

The ST&M Stannington route was service 7 and it retained that number until the start of the 21st Century.   By the 1940s, housing development was spreading along the Stannington Road so the route was becoming less "villagey" and more urban. 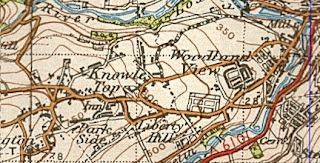 The Malin Bridge tram was replaced by bus 88 in January 1952 and on the same date, service 7 was extended through to the city centre.   Four years later, the 88 was extended up Stannington Road to a terminus at the end of a narrow lane called Roscoe Bank.   Roscoe Bank was shown on the destination blinds and this soon became accepted as the definitive name for the growing blocks of housing on both sides of the main road.

facsimile of the Sheffield Transport style map of the 1960s
simple, informative and elegant
Further route developments in 1962 and 1966 took the 88 route to Liberty Hill via new housing on Deer Park Road until after a final twiddle the route reached its present terminus (now numbered 12) in the Hall Park Head estate. 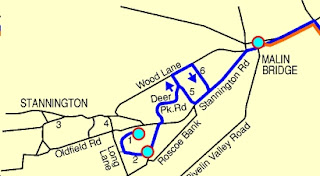 Hall Park Head (1) and Liberty Hill (2) as served by route 88
Throughout these changes, however, service 7 remained largely unchanged until the most recent development, namely journeys via Acorn Drive.
It was in the late sixties that fbb developed his mapping mission, when he created (and routinely updated) the Sheffield Transport network map displayed outside the Castle Square enquiry office.   The distinctive orange colouring on a large street map, together with dayglo orange "stickers" at the termini and route numbers alongside key roads created an easy-to-follow and popular point of reference in the city centre.

South Yorkshire Passenger Transport Executive absorbed operations of the three municipalities  in 1973 and soon produced their own two printed maps; of Sheffield & Rotherham, and of Barnsley & Doncaster.These were much less detailed than the "old" Sheffield maps, but still retained a simplicity and clarity of style which enabled the travelling public to navigate the network with comparative ease.   The observant will notice that a service 87 has been added; plus some 31s at school times.

But, as with so many things, deregulation of the bus industry in 1986 brought a dramatic increase to the instability of the network as competition flooded Sheffield's roads with a multiplicity of new and often short-lived operators.   Maps and timetable booklets died - RIP!

So where are we  nearly 25 years later?
See the next thrilling installment ... 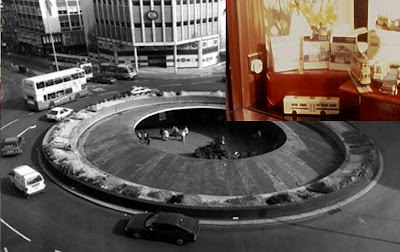 Castle Square - the famous "Hole in the Road", later
filled in for the tram!
With (inset) a glimpse of the excellent enquiry office display
courtesy of the late and lamented Marian.
Posted by fatbusbloke at 08:30