In A Fix About Trix? 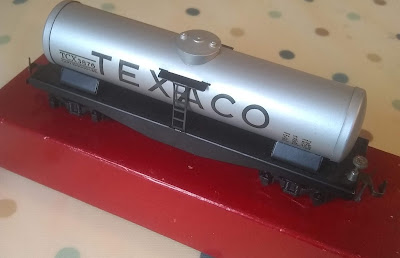 Peter owns the definitive volume on the history of Trix in the UK. 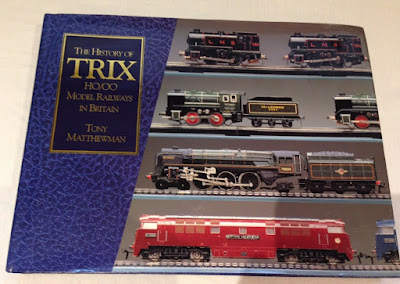 fbb is keeping his eyes peeled for a reasonably priced pre-owned copy!
Initially made for export only, the Texaco tanker was adapted for the UK market in 1952 as part of a range of US wagons. They remained on sale until 1959. 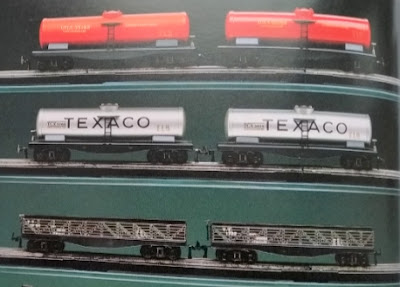 It used the same chassis as the bogie open wagons made with UK liveries and those from across the pond. It used a standard folded metal chassis, used for all types of bogie wagons, to which everything was fixed. The detail was crude and included a handbrake wheel, no buffers ... 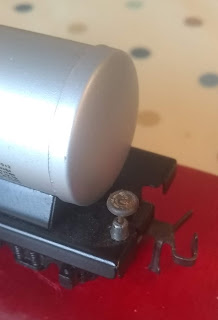 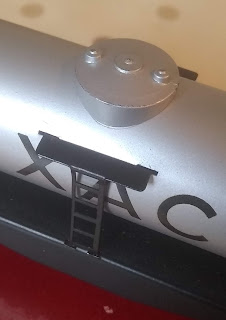 The bogies were also folded metal ... 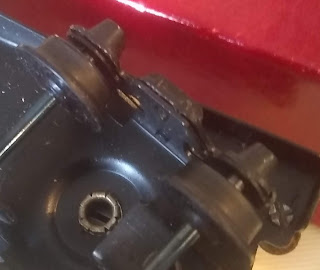 ... but with cast axle box and spring detail stuck on the outside. 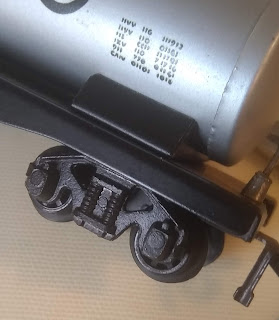 The only bits of plastic are the wheels, a push fit on metal axles.
There is, of course, no comparison with today's bogie tank wagons; this version of the Trix model from Bachman in America ... 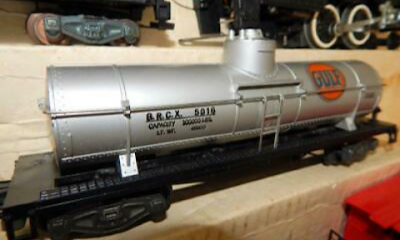 ... which does suggest that the ancient Trix tanker was based on a real prototype, albeit interpreted "loosely". 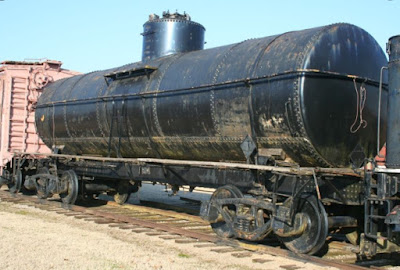 Of course, a modern UK wagon is all plastic (possibly with metal wheels) ...

... but the detail is exquisite and the price, painful! 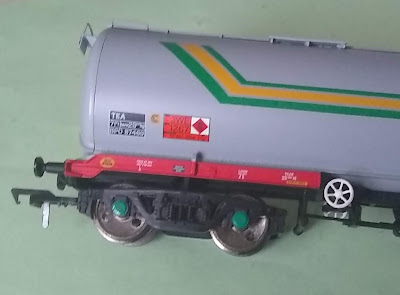 The tanker is classified TEA; which brings us to more foods and their associated models. 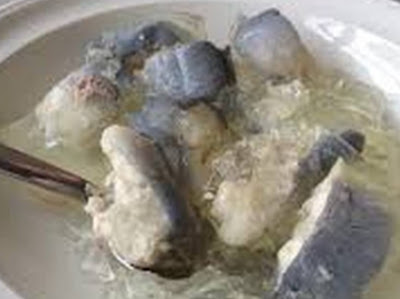 Take a trip to 105 High Street Peckham (in london - Only fools and Horses territory!) and you will still find Manze's Jellied Eel shop. 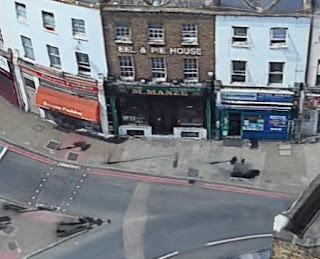 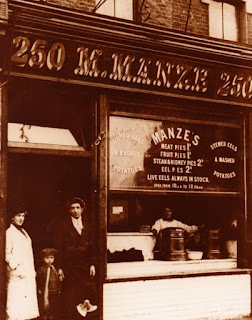 So, how about owning your very own eel and pie shop, and mobile to boot. Well you can in 1/76 scale for your model railway, or just to admire on a shelf somewhere. 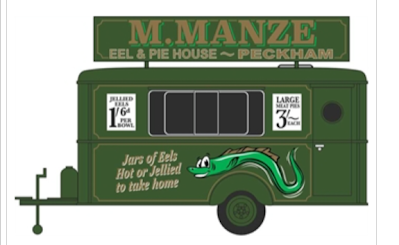 You may be dejected to know that, today, a bowl of jellied eels at Manze's will cost you £7, no longer 1/6 or a littleover 7 pence. 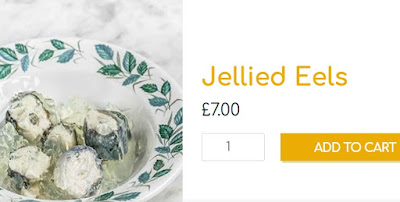 And, no, fbb never has - and probably never will!
We all remember pilchards. 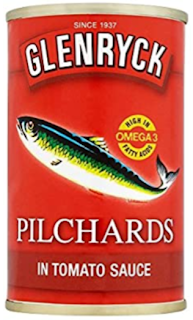 One stand-up comedian (Jasper Carrott?) used to opine that nobody ever ate pilchards, they just kept a tin or two in the cupboard for a year or so and then threw the unopened tins in the bin! 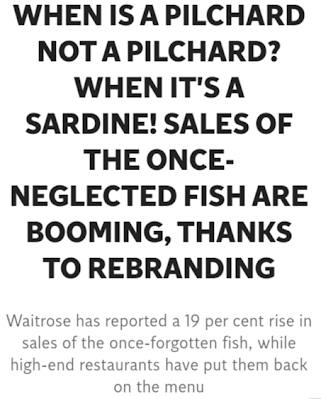 A Pilchard IS a Sardine IS a Pilchard. 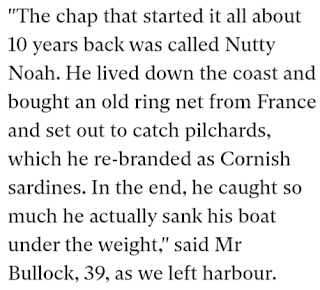 So this headline in the Model Press might be of some interest. 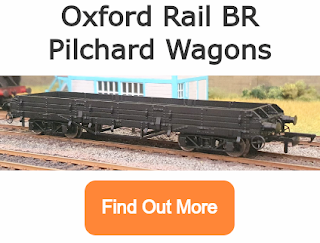 Now, before our reader suffers visions of an open truck full of twitching, slithery and slimy Cornish sardines; relax. The wagon did not transport the little food fish, either nude or in tins or in boxes of tins.
The read Pilchard wagon was used for conveying materials (ballast, sand, gravel) to sites where track maintenance was happening. British Railways (and some of their predecessors) gave wagons names, many of them being names of fish. So here is a full sized Pilchard!

And here is a full sized pilchard ...

... or is it a sardine?
Either way, Oxford Rail is making an OO gauge Pilchard.
Rail Blue, Thai Food and Pitlochry? 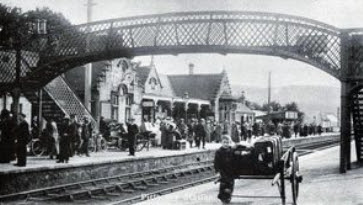 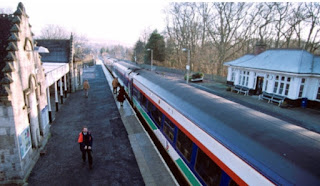 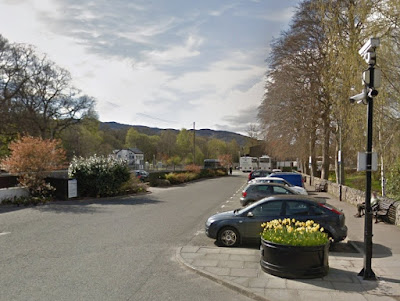 The journalistic hack who penned the report had never been to Pitlochry and, clearly, knew nothing about railways.

Well, it was only The Scotsman, Scotland's most prestigious newspaper!
So what might appear there - possibly? 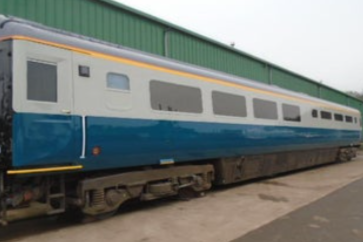 A startup company wants to park a couple of these adjacent to the station on a bit of track and serve Thai food therein. 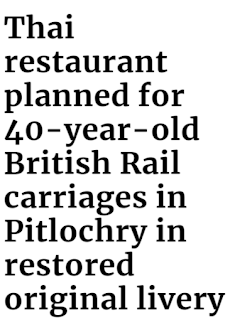 They plan to go back to the original orange fabrics that we all knew and loved (?). 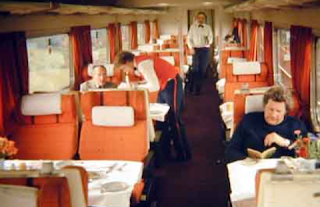 They have already had the vehicles painted back into the blue and grey livery and have now applied for planning permission. Somehow that seems the wrong way round. If planning permission is not granted (surely a possibility in such a sensitive area?) what do you do with a couple of huge railway carriages?
Helpful Or Not? 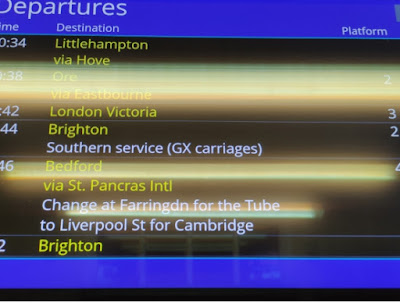 Will Southern's passengers know what "GX Carriages" might be?

The nonsense began when Southern OR Thameslink OR Gatwick Express OR Go Ahead/GoVia OR the Department for Transport (DaFT) decided to extend some dedicated Gatwick Express trains to/from Brighton. The nonsense is now much worse.
Temporary suspension of Gatwick Express
From Monday 30 March (2020!), Gatwick Express services will be temporarily suspended until further notice.
This is because of a significant reduction in passengers at the airport, and to help keep other trains running for key workers getting to and from their place of work.
Southern and Thameslink are still running to and from Gatwick Airport, and will provide journey options to both London and Brighton.
Please ensure you check journey planners before you travel for the latest information and alternative journey options.
Presumably, rather than leaving the "GX Carriages" to rot, the engineers are using the trains to spread out the maintenance load at the depots. A sensible move "for the duration" which will ease staffing requirements.
If the bosses though that the different stock would be confusing, wouldn't it be easier and clearer to say, simply, RED carriages? 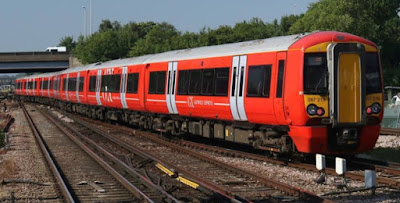 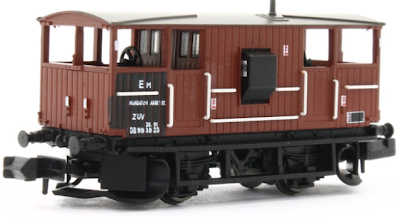 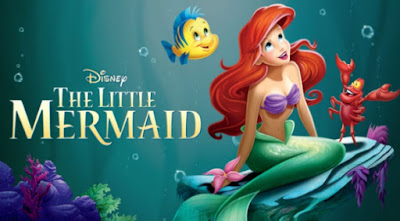 ... is NOT a real mermaid!
American Tank Wagon PS

Thanks to correspondent Ken who sent this picture yesterday evening. It shows a few US tank wagons in use, most of them more modern and with a much longer wheelbase that that provided by Trix - more like the UK's TEA stock.

Quite a lot of other "stuff" has wandered into fbb's in- box over the past few days so ...
Next Tuesday Variety blog : Tuesday 2nd February
Posted by fatbusbloke at 02:00