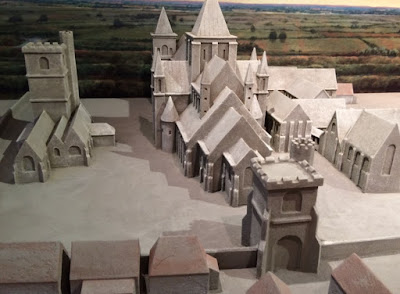 Barking Abbey was immensely rich and powerful in ancient time. It was known as a dual house, with monks and nuns each occupying separate but similar wings of the building.
The "Curfew Gate" is all that is left of the Abbey, thanks largely to Henry VIII ... 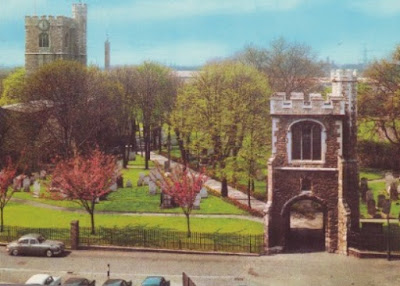 ... although erven that remnant has been much rebuilt.
Ilford was historically known as Great Ilford to differentiate it from nearby Little Ilford. The name is first recorded in the Domesday Book of 1086 as Ilefort and means "ford over the Hyle". "Hyle" is an old name for the River Roding that means "trickling stream".
Barking was a huge Manor (landholding), first mentioned in a charter in 735 AD. The Manor covered the areas now known as Barking, Dagenham and Ilford.
As is so often that case, it was the railway that led to the town's steady and substantial expansion. 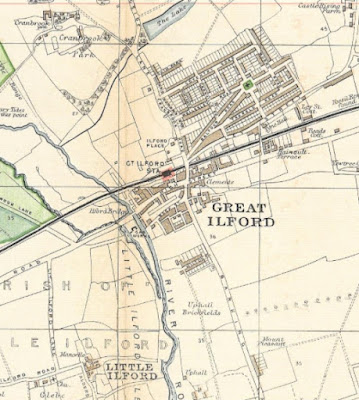 It just grew and grew! 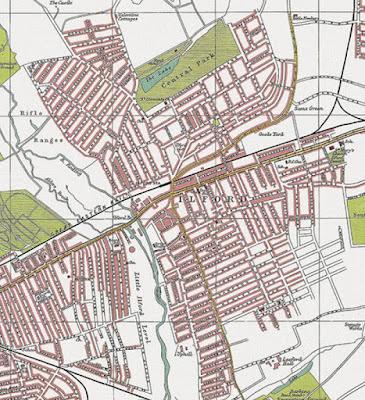 Notice the triangular railway junction in the map above, upper right.

Ilford railway station was opened on 20 June 1839 by the Eastern Counties Railway, along with the Mile End (temporary London terminus) to Romford section of what was to become the Great Eastern Main Line.

Between 1903 and 1947, trains also ran through to Woodford via the Fairlop Loop, most of which was later transferred to London Underground's Central line. 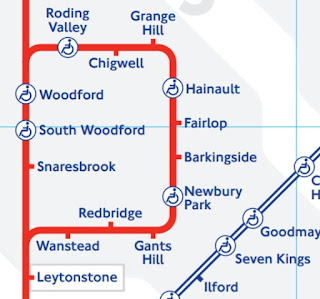 The triangular junction (Seven Kings being the third point of the triangle) is now the site of carriage sheds and a maintenance depot operated by Bombardier Transportation. Freight trains used the connection from the Fairlop Loop to Seven Kings until 1956.

Travelling south from Newbury Park (courtesy of Google Earth) we see the Central Line plunge into its tunnels ... 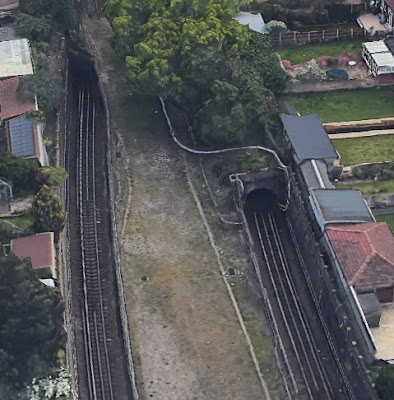 ... leading to Gants Hill etc. The freight connection refereed to above is shown disappearing off in the centre of the two tracks. 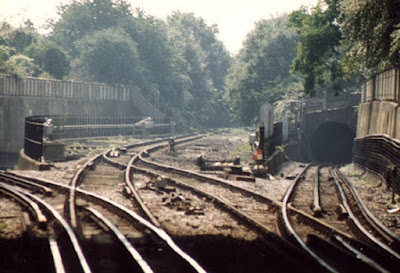 The rest of the route to Severn Kings has been turned over the a long string of allotment gardens ... 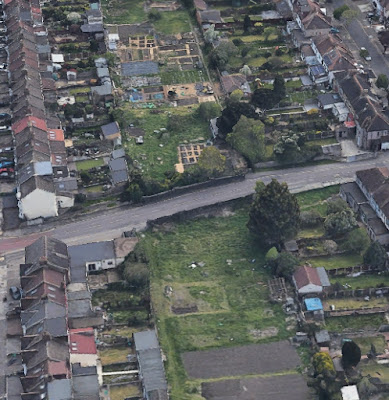 ... with bridge abutments still in place. 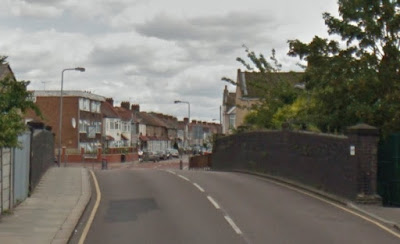 Before returning to Ilford, however, we must record the other big excitement at Newbury Park ... 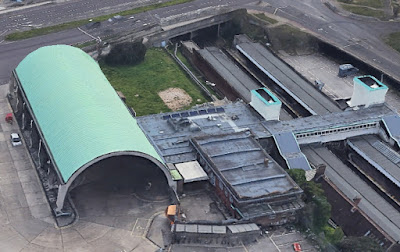 ... namely the disused aircraft hangar. fbb jests, of course; it is a bus station! 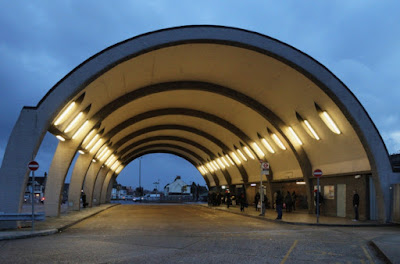 Perversely, it always seem to be photographed without buses! Except when there is a special "rally" event on" - this being tagged "London Buses At Night"! 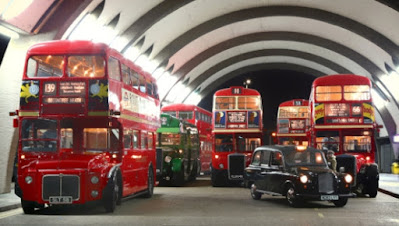 There wasn't a single solitary red PCV when Google Streetview trundled past! 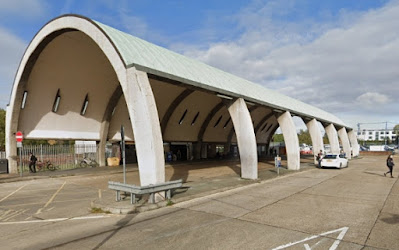 Newbury Park's most prominent feature is the bus shelter connected to the station entrance, designed by Oliver Hill in 1937, and opened on 6 July 1949. Distinguished by a copper-covered barrel-vaulted roof, the structure is a Grade II listed building and won a Festival of Britain architectural award in 1951. The award was marked by a plaque by the side of the shelter.
Bus shelter?
But we stray from our purpose. So let us hie happily back to Ilford.
Ilford has been a party to plenty of transport history. The Council had its very own tramway system ... 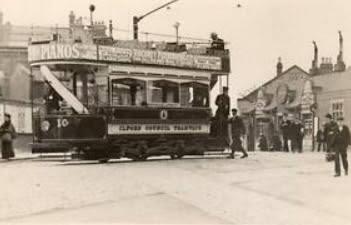 ... until being absorbed into the forerunner of London Transport in 1933. It simple route network ... 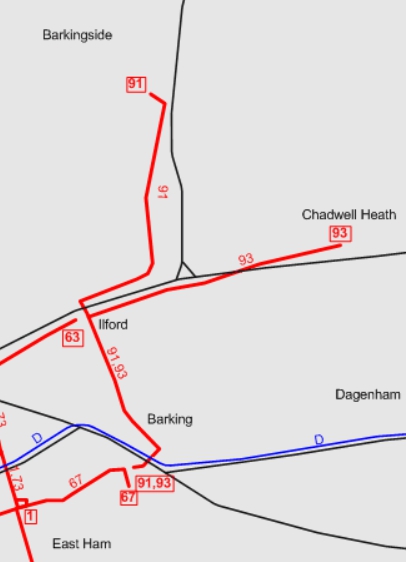 ... came together near Ilford station ... 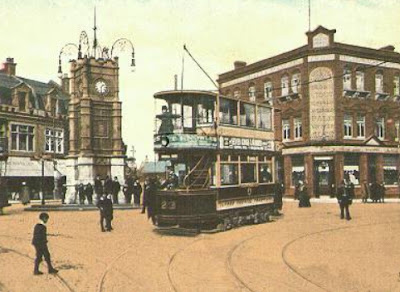 ... where Peter Griggs clock tower was a key landmark. 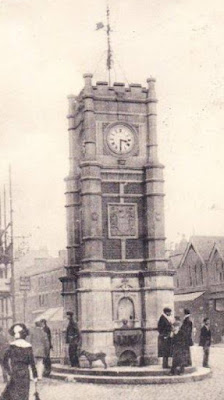 It was moved in 1934 and destroyed by a V Bomb during the second World War.
The railway service to Shenfield was doe to be electrified by the London and North Easter Railway in the mid to late 1930s, but, as with the Woodhead project, it was not completed until post WW2. 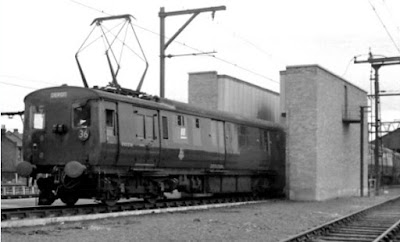 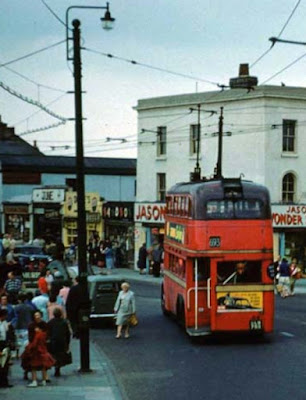 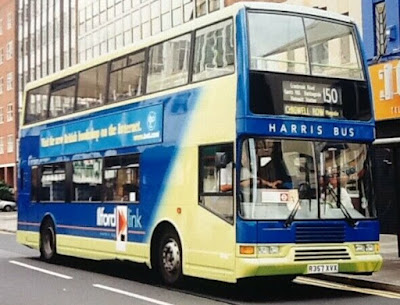 The company went bust two years later. Probably its most celebrated contract was for the famous 108 via the Blackwall Tunnel ... ... then running all the way to Lewisham!
Tomorrow we look a little further at trains and the station and bring the story bang up to date.
Next Interesting Ilford blog : Friday 19th February
Posted by fatbusbloke at 02:00