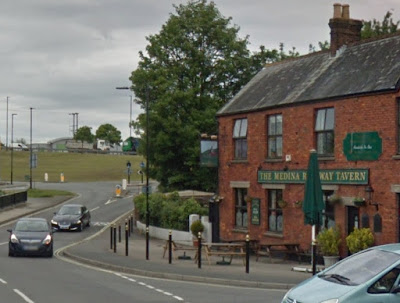 The Medina Railway Tavern is the only clue! Somewhere over just beyond the cars was Newport (Isle of Wight) Railway Station. Pictures of the station from the road forecourt are not common, perhaps because the station was relatively unmemorable. 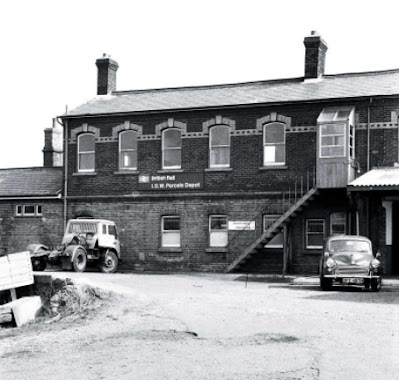 Here is a bit more, but fuzzy! 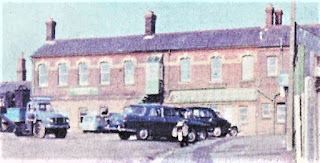 But, for its size, it was a busy place in its heyday. 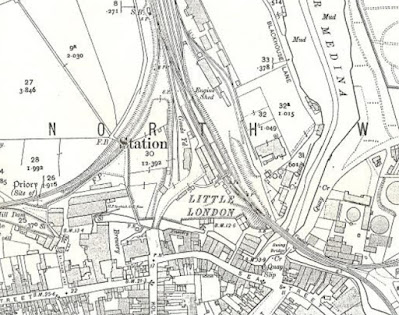 The "main line", if you could ever think of any line on the Island as "main", went off north to Cowes and east to Ryde. South was Merstone Junction where that line split, continuing south to Ventnor and east to Sandown. The line to west to Yarmouth and Freshwater,  once had its own station (near the "S" of "station" on the above track plan). Later, trains would run from the main platforms (just above the "Little" of "Littler London") in reverse before chugging of westwards.
The superb magazine of the Isle of Wight Steam Railway appears quarterly and fbb received an early birthday present of the current issue.
It reminds the old man that the embryo preservation society was given just one week's notice to recover the stock it had bought from British Railways, stock that was stored at Newport Station. The expected call came on 24th January but the short notice was far from expected. Thankfully stock was moved just in time! 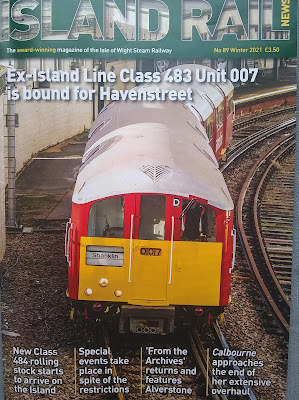 The magazine shows a picture of crowds greeting Loco W24 Calbourne and a few carriages as they arrived at Haventreet for the first time.
Calbourne is currently being done up, and will appear in Malchite Green ... 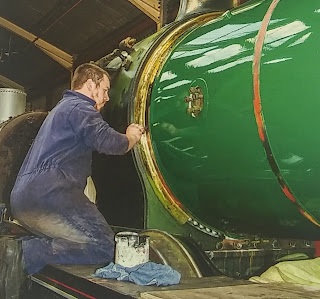 The journal also reports that cab and tanks have been re-united with boiler and chassis ... 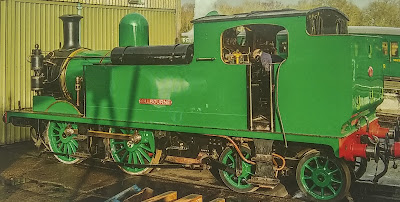 ... also that the interior of the cab has been repainted. 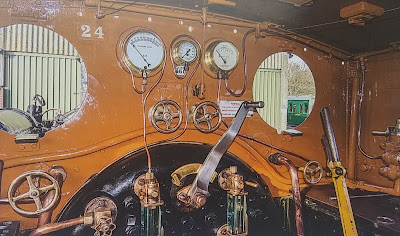 Did W24 ever wear Malachite Green in real life? It matters not - it will look splendiferous at the heasd of a train of the Railway's magnificently restored carriages. 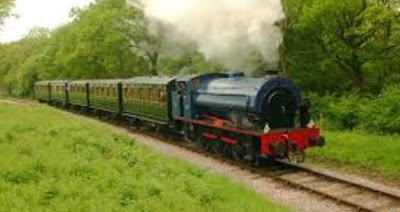 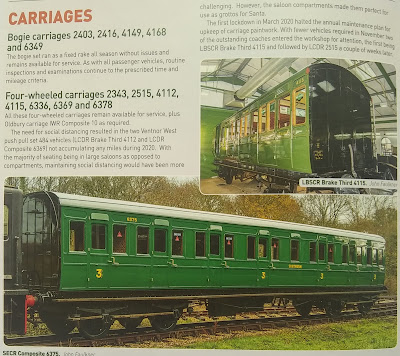 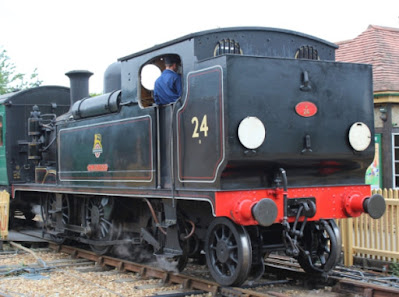 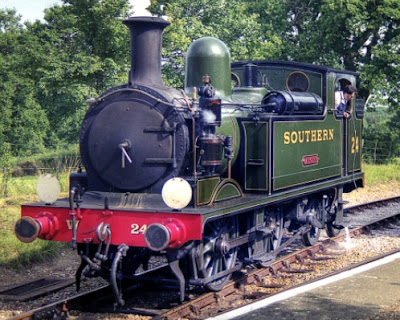 Version 3 will be up and running soon.
Also reported is that First Rail, franchise holder for Island Line, has donated one of their ex Underground two car trains to the Steam Railway (The Steam and Electric Railway???). Train No 7 had been repainted and generally fettled up before the line closed for upgrade, so it look good.

These trains, too, have appeared in many guises. They came as Network SouthEast ... 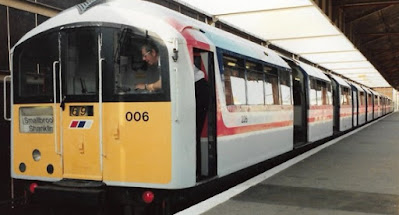 ... before re-appearing in the dramatic Dinosaur livery. 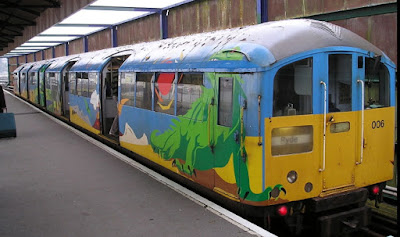 Initially the train will go on static display in "Train Storry".
Experience the sights, sounds and atmosphere of over 150 years of railway history.
Inside, you will find displays of our Victorian and Edwardian carriages alongside a collection of our rare rolling stock, all preserved undercover and protected from the elements, allowing us more time to spend on restoring other historic vehicles. They aren’t shut behind glass though – in fact, if they are unlocked, then step aboard for a closer inspection.
Kids will love dressing up as drivers and guards and re-enacting stories from the past. Follow the timeline detailing the history of steam railways through to the modern day electric line and find out why May Joyce is such an important person to the history of railways on the Island.
This amazing interactive museum was made possible by a £1.2m grant funded by the Heritage Lottery Fund and first opened its doors in April 2014. 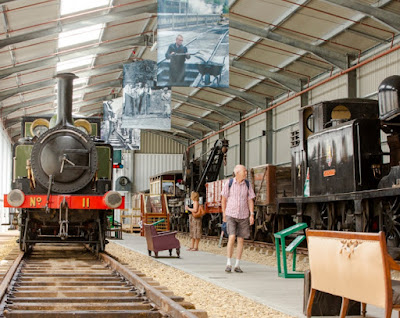 Maybe at a later stage the unit will be used in service, possibly powered by batteries or (sounds of gasps of horror from purists) hauled by a diesel locomotive.
The magazine also has a report from its general manager which might be expected to be full of doom and gloom under the present unprecedented circumstances ... 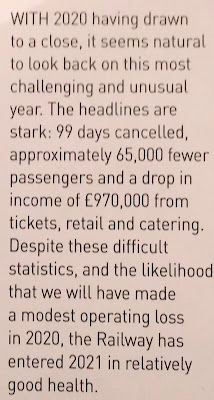 ... but boss Steve Backhouse is up-beat for the 2021 season. With 50th Birthday celebrations coming up, this excellent Railway deserves to recover quickly. It's up to Boris now! 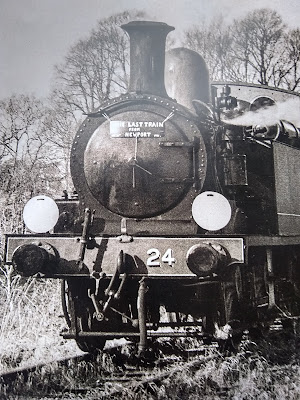 On a less positive note, the upgrade of the Island line will not now be completed during March, but has been extended well into April, at least. As usual Covid is blamed.
What is more worrying is that rumours are flying around that the new old Underground trains are giving trouble. 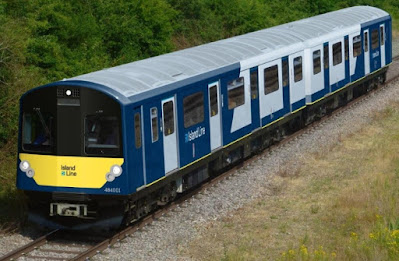 Northampton correspondent adds to the rumours by reporting that he has heard that delivery of the next trains is also delayed. Just one two-car unit has been on the Island.
They haven't be brave enough to make sure it fits through the Ryde tunnel yet. 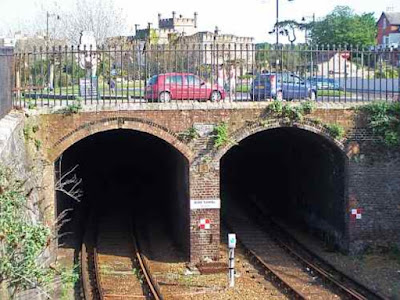 Some readers with excellent memories will perhaps remember that today is also another, less notable, birthday. The key feature of the celebrations will be Mrs fbb's famous coffee cake.
At least one other book has been delivered, marker with stern words about not opening until 25th. Maybe a book review tomorrow?
Mrs fbb's coffee cake as completed yesterday evening. 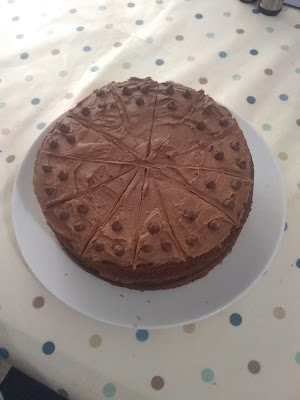 This will be a great delight and partying will continue well on to at least 2000 tonight!
One of the biggest IoW bus events is "Beer And Buses". The Bus Museum has just issude the following press release. (expurgated by fbb)
Covid scuppers Beer and Buses Weekend in 2021 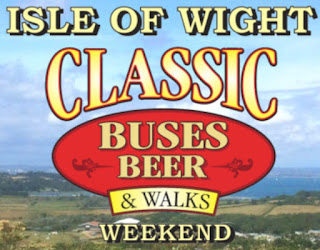 The IW Bus Museum and IW CAMRA have announced that the Classic Buses, Beer and Walks Weekend, provisionally scheduled for mid-October, has hadn't to be cancelled for the second year running. This popular event takes many months of detailed planning and there are still too many uncertainties. It is hoped that the event can return in 2022 as it contributes significantly to the Isle of Wight economy. 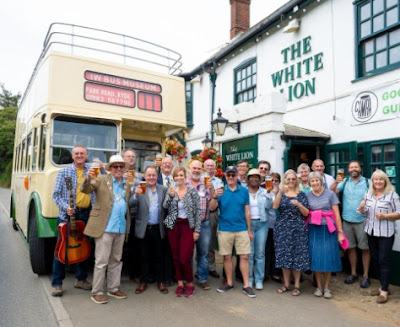 Ben Bartram, the principal organiser for the IW Bus Museum, said; "This is a carefully considered decision. We have been talking to key stakeholders in recent weeks, including the vehicle owners who provide the classic buses.  The consensus is that we cannot risk significant outlay of both funds and voluntary organisers' time, as we cannot be confident of being able to put the necessary infrastructure in place. "
Tim Marshall of IW CAMRA said; “We realise that many will be disappointed with the decision. However, although we now know that restrictions will ease for pubs and other licensed venues soon, we have had to decide now”.
Both the IW Bus Museum and IW CAMRA are considering much smaller events later this year if circumstances allow. Any such developments will be announced through press and social media outlets.
Next Book Review blog : Friday 26th February
Posted by fatbusbloke at 02:00