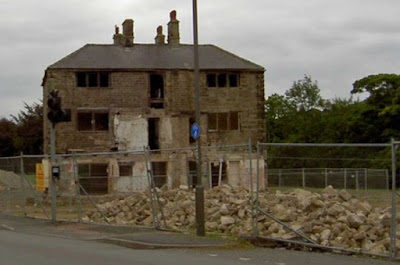 The Marquis of Granby pub at Bamford, shown on Derbyshire's current (!) route map ... 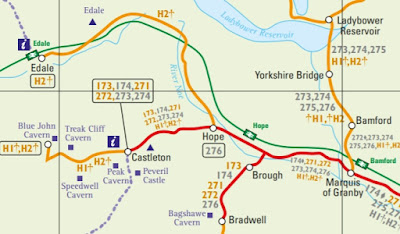 ... was demolished sometime in 2006/7 but disused for several years before that. Thanks to Sheffield correspondent John for correcting fbb's poor memory!
GoTimetable Sheffield is showing the CORRECT 272 timetable, but failed to deliver on time due to the poor information available in Sheffield.

Above is "Victoria of Wight" as delivered in Summer 2018 and as operated with "Hybrid Energy" emblazoned on its hull. Here is the same vessel ...

... with its new livery. The ship has had a number of embarrassing breakdowns in its brief life with Wightlink, so the question asked is whether its "Hybrid" conventions have been dropped in favour of something less technologically demanding?
Dunno!
Preservation? 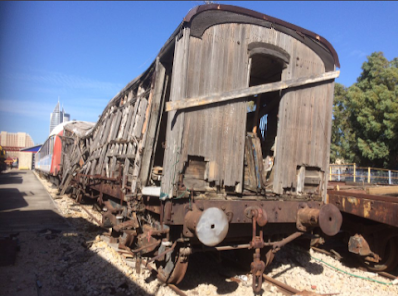 This railway carriage might be in need of a bit of tender loving care! 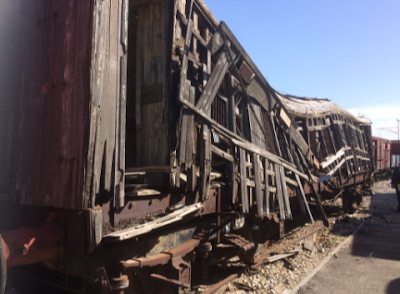 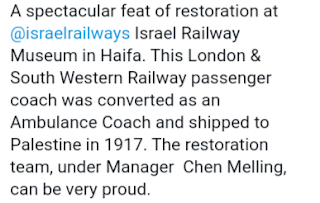 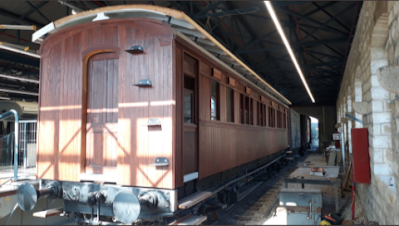 Indeed. You do wonder how much of the original they actually used!
Bow Street Built 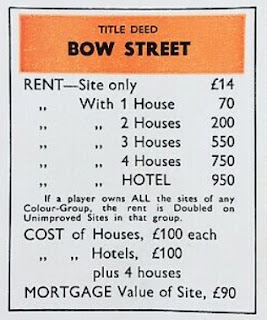 Getting all the orange ones used to be a good technique for winning at Monopoly. Adding the four stations, often overlooked as they did not have pretty coloured headings, was also a useful ruse. Bow Street in London is a bit of a back alley, not far from Covent Garden, but otherwose, decidedly unmemorable. 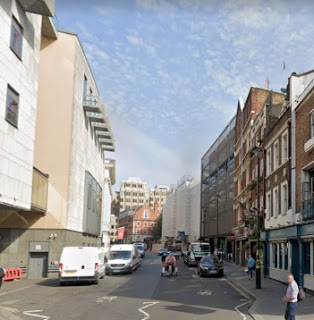 The other Bow Street is hardly a bastion of architectural or industrial supremacy. There it is, just north of Aberystwyth. 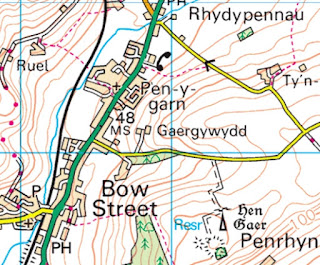 And this is the A487, travelling south through the town. 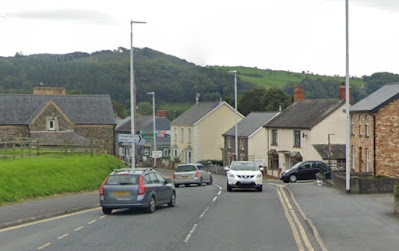 ... was slightly to the south of the village and is now a builders' yard. 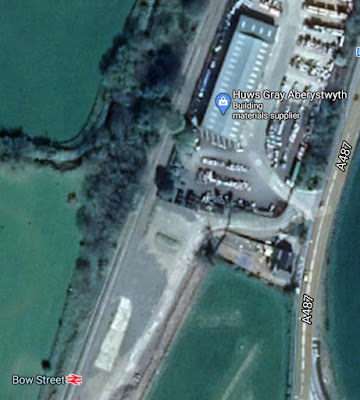 But Bow Street now has a new station a little further to the south.

You can spot the builders' yard, centre right. From the earlier aerial view, it looks as of access is through the same gate as the yard. 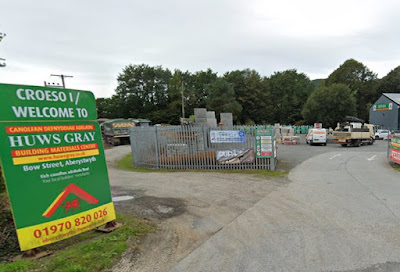 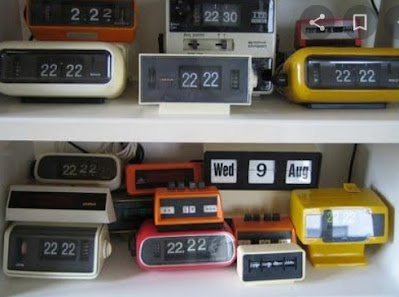 Always anxious to embrace modern technology, fbb equipped the lounge in his first-owned three bedroomed detached house in much sought after Upper Fulwood (Sheffield) with a digital clock. This proved a great hit with the teenagers who crowded into said living room for a Sunday evening fellowship.
Getting rid of them was the hard job, but fbb devised a cunning plan. Once the clock moved on to 2222, departure was immediate and with no further debate. After an outburst of technological excitement as the numbers clicked into place, the minibus was loaded and those with their own wheels also departed.
But the clock did not show seconds. Many railway clocks do, so, assuming you are passing by at the appropriate hour, you can enjoy this. 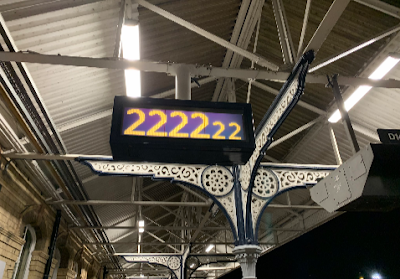 On a similar theme, the updates to GoTimetable Sheffield are each given a number based on date and time. The most recent update was:-
2021022101
Readers can amuse themselves working out the code!
NWR Boring Livery 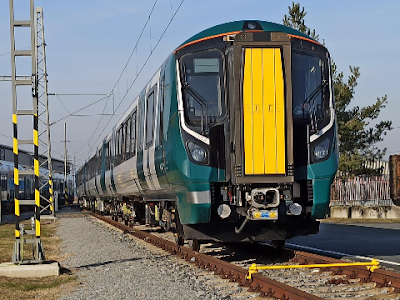 New trains for the non-intercity service from Euston via Rugby and Brum are beginning to peep outside their little sheds, The trains, like similar for Scotrail, are plug ugly and the livery is ...

... as boring and unattractive as that for South Western Railway. 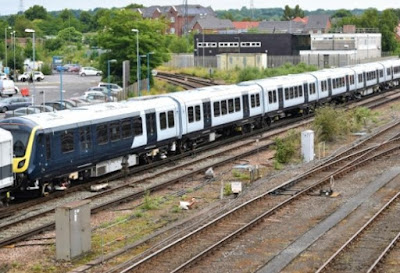 Perhaps it is a franchise contractual commitment to have poor livery; see also Thamelink. 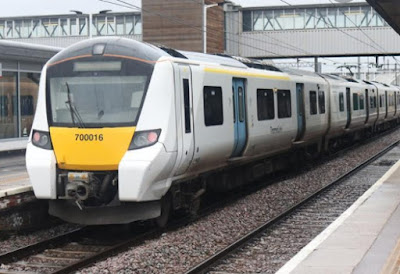 Certainly there is no evidence of "Creating Desire",

Prototype For Everything Department
Debate rages amongst railway modellers about realism. At one extreme, enthusiasts fulminate if your tank engine has the wrong shaped poppet valves (whatever they are) whereas at the other extreme there are still those who, like fbb, don't care too much if their coaches are lacking brass door handles as long as the vehicle looks "about right". 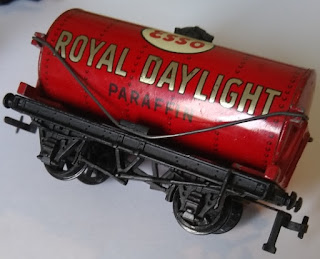 Now fbb has hope for those modellers who collect far too many locomotives for their layout and keep the surplus in boxes under the bed. 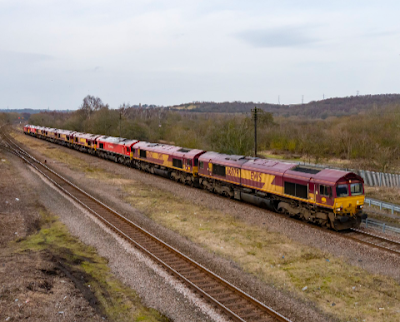 It is a train consisting of loadsa diesel locos (nine?) all trundling off to somewhere exciting.
P.S. They were travelling from Doncaster to Toton.
Signs Of The Times 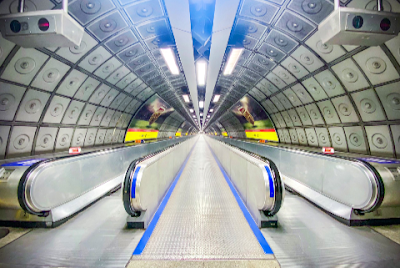 A view of the Travolator that leads to/from the Jubilee line platforms at Waterloo Underground station. This was taken as the photographer made his way to work, so around peak time. This is what it would normally look like. 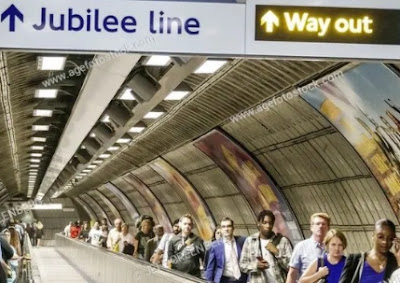 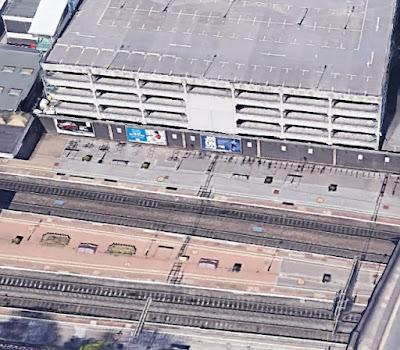 Multi-storey car parks are never the most stimulating buildings architecturally. This one is at Coventry station. There are massive improvements (?) and/or developments in the area and the debate begins as to how to make the car park look more attractive - to create desire.
One idea is to turn to car park into an "artwork" in its own right. 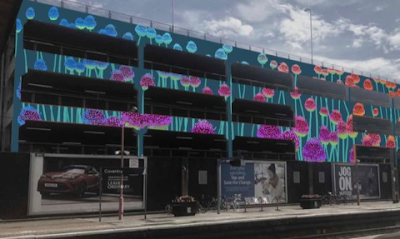 It is only a proposal but fbb is not at all sure that it helps!
Tomorrow we are off to Europe to find another modern multi storey car park, and, elsewhere, an historic bus station.
Next Europe blog : Wednesday 24th February
Posted by fatbusbloke at 02:00