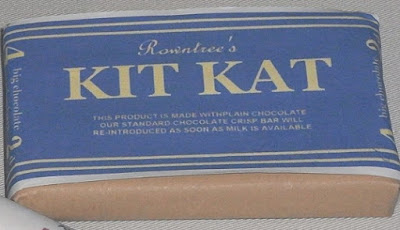 Wikipedia tells us all about the 18th century political club, all about the famous chocolate bar and even refers to a new club open in Berlin. Of course, fellow ancients know that a proper KitKat has FIVE fingers and used to cost a tanner! And as for the new fangled PINK bars and those with "added luxury" ... 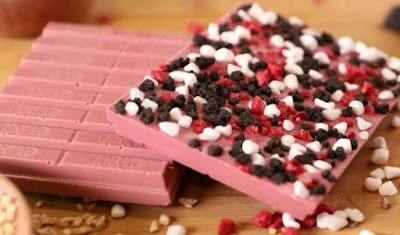 ... it is nothing but a disgrace! The brand is world-wide as on this tram in Lisbon. 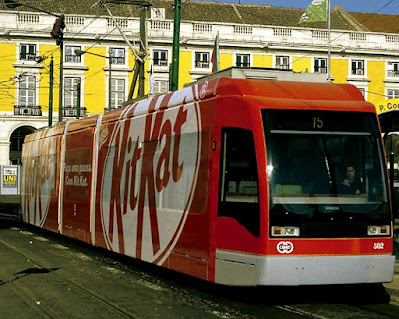 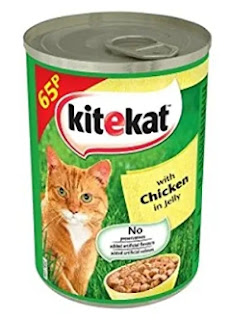 ... or you might be disappointed! [Kit e Kat chicken? Another travesty, a far cry from the smelly fish and unmentionables mulch that the cats of fbb's childhood "enjoyed"!!]
But there is less coverage of the Kit Kat at Hunstanton. Sadly that name and its building is the only tangible memory that fbb has of his childhood visit. It is possible that dad took the lad on a boat; your blogger has shadowy memories of going under that bridge ... 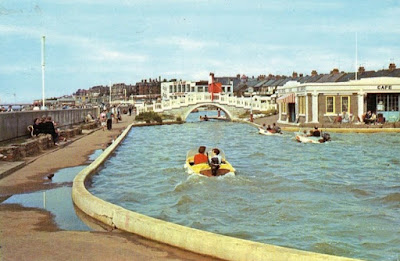 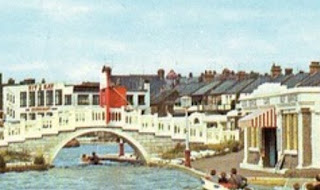 ... is the KitKat. Why fbb remembers it from over 70 years ago is uncertain; he was never taken inside to enjoy its facilities. But he clearly remembers the name, the art deco building and the Kat! 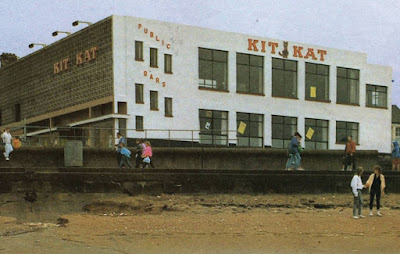 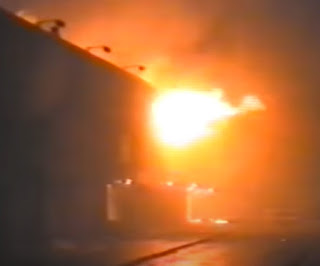 The pier succumbed to a conflagration in 2002, the boating lake has gone, and trains ceased to run in 1969.  Things really have changed at Hunstanton.
The Kit Kat site remains empty ... 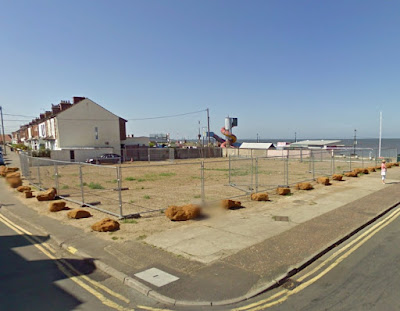 ... but will soon be filled with an uninspiring block of flats. 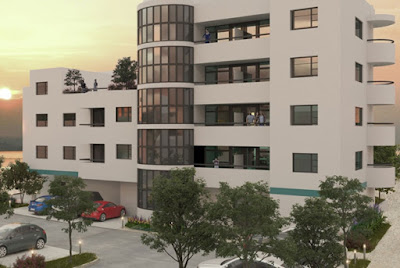 At least something of the "art deco" will remain.
But, as usual, we digress. Back to Public Transport and now, the buses. Traveline offers just one "normal" service ... 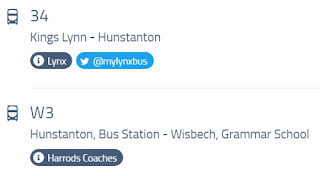 ... although the Lynx map of Norfolk links shows slightly more. 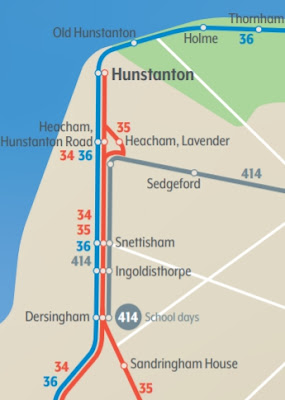 Presumably the deficit can be put down to the current unprecedented circumstances. The on-line timetable for the 36 is hardly customer friendly. 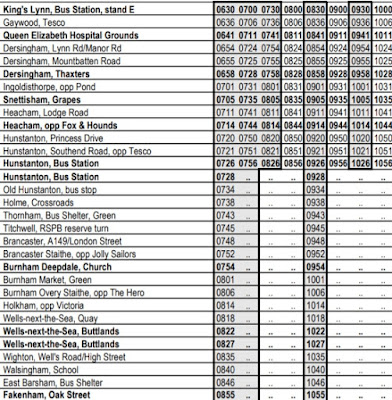 It shows a 30 minute service from Lynn continuing every TWO hours along the coast to Wells, before turning inland to Fakenham. 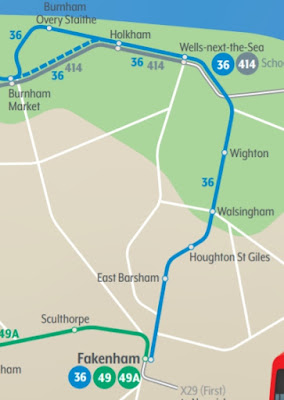 Unhelpfully it purports to be a "daily" timetable but a note explains that journeys in boxes do not run on Sundays, which leaves just an hourly service between Lynn and Hunsanton on the Sabbath.

"Whatever happened to Coasthopper?" we hear our expert readers cry.

Historically the area was mainly the territory of Easter Counties ... 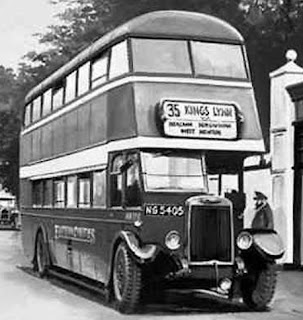 ... later First Bus. But as Barbie retreated, others stepped in. The most notable arrival was Norfolk Green ... 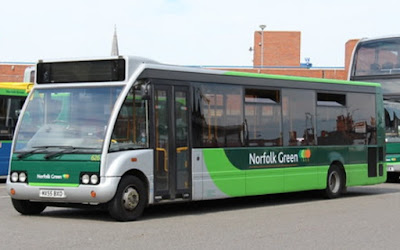 ... under the leadership of ex Stagecoach big cheese Ben Colson. 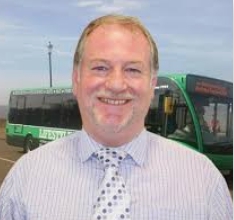 One of Ben's most meaningful developments was to create (almost from nothing, just a collection of ill-connecting bits) the magnificent Coasthopper which served the coastal communities (there's a clue in the name!) all the way from Cromer to Kings Lynn. The map (split up to fit on this blog page) shows the scope. (click on the maps for a larger view) 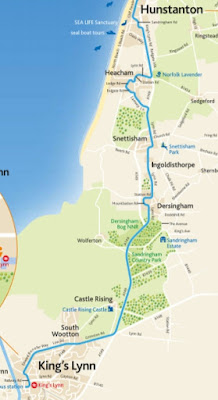 There was excellent publicity ...

... and branded and liveried buses. 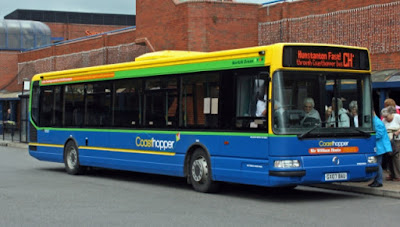 Mainly for health reasons, Ben sold out to his former employer, but Stagecoach was keen to announce that Norfolk Green livery and name would continue - which it did for a while before slowly morphing into corporate Stagecoach. But Coasthopper remained with a tiny "Stagecoach" label. 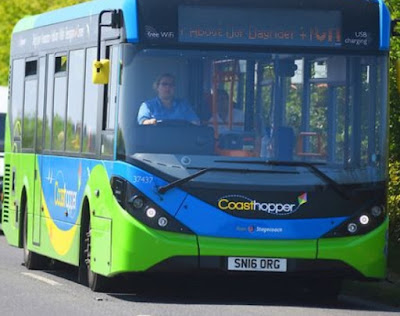 Then, shock horror, Stagecoach walked away from their Norfolk operation completely in 2018!
Lynx ran the 36 as we have seen and the bit from Wells to Cromer fell in to the hands of Sanders. 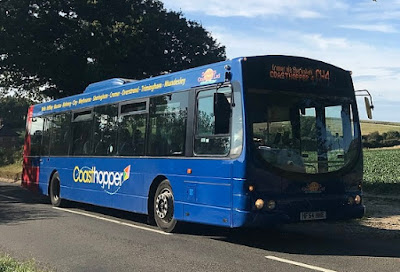 Sanders retains the Coasthopper brand but only runs (on the old through route) between Cromer and Wells, 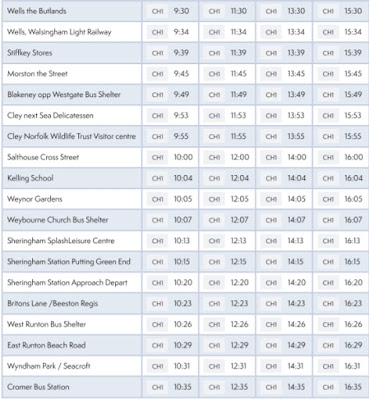 Lynx brand their 36 as "Coastliner", but you would hardly notice from either the buses or the leaflet ... 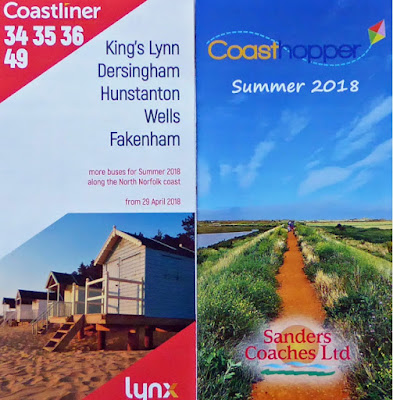 ... with only some vehicles photographed with the brand. 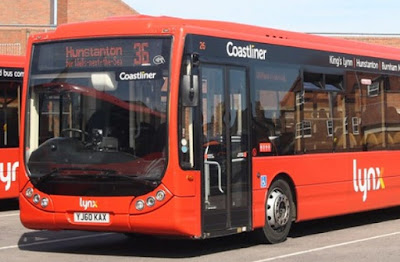 And for a bit more nostalgia, here is Eastern Counties equivalent in the pre-privatisatiton 1980s. 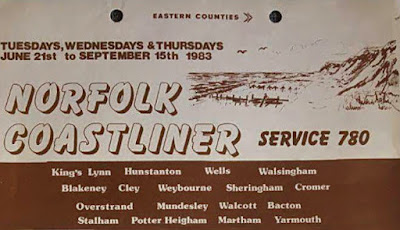 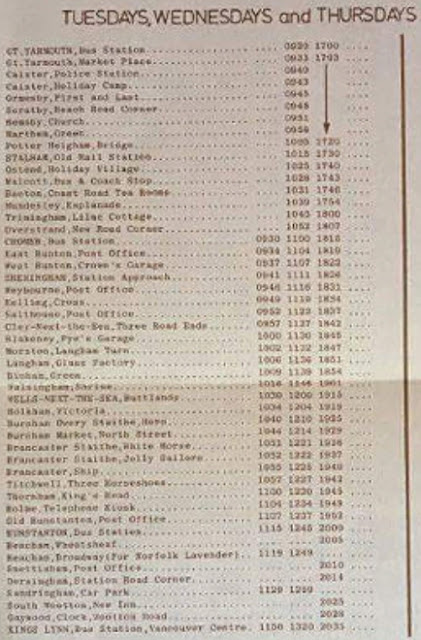 ... to Kings Lynn (1320). There's a 20 minute wait before leaving at 1400 and arriving back at 1745. Let's hope there were opportunities for the (very !!) necessaries.
But only on Tuesdays Wednesdays and Thursdays.
And a great picture from days well past of charas lined up in Peterborough for day trips to Hunstanton. 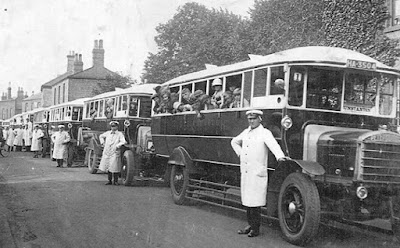 Those were the days!
But, back to Hunstanton itself. The town has a sweet little bus station ... 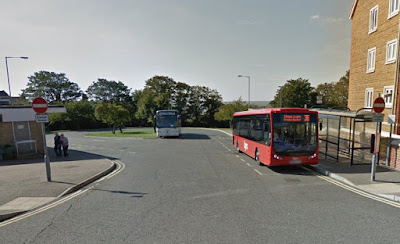 ... with three shelters and room for buses to park during "layover". Pursuing their desire to encourage public transport, the council (Kings Lynn and Hunstanton of that ilk) has decided to close the bus station and relocate stands - with much less room for vehicles and people - to a nearby street. Of course there is a small housing development planned for the land.
Shameful and short sighted ... especially as Lynx offered to buy the bus station from the Council.
Tomorrow we go to London.
Next Interchange blog : Thursday 18th February
Posted by fatbusbloke at 02:00