How To Spread Confidence To Passengers
IN SHEFFIELD

When fbb visited Sheffield back in September, he took Mrs fbb on a pleasant trip to Bakewell. fbb bewailed the poor quality of information at the departure stand in Sheffield Interchange. 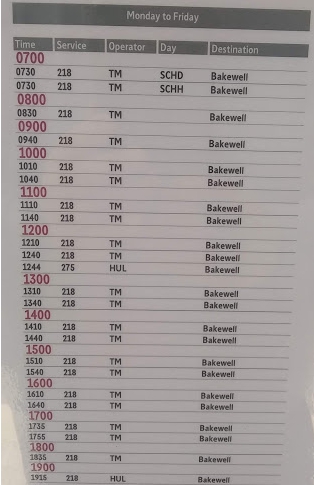 The problems were:-
No indication of the difference between the two 0730 journeys
No indication of which buses went via Chatsworth House
The inclusion of route 275 with no affinity whatsoever with the 218
it should be with the 273 and 274
Incorrect information for the 1915 Hulleys journey
it does NOT run to Bakewell
Apart from that it was fine if you did not what to know when you might arrive at intermediate points.

A recent picture, send by a new Sheffield correspondent, shows the dramatic improvements since fbb was there. 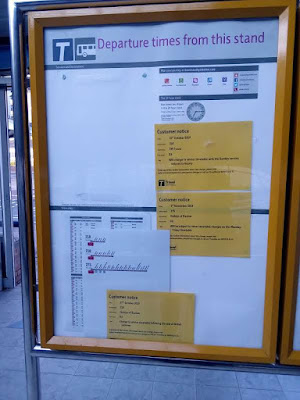 Note that the departure list is now almost completely obscured by other information.

How to Spread Confidence To Passengers
IN YORK

A slightly mysterious article has appeared in the York local paper "The Press". The Headline is strangely familiar. 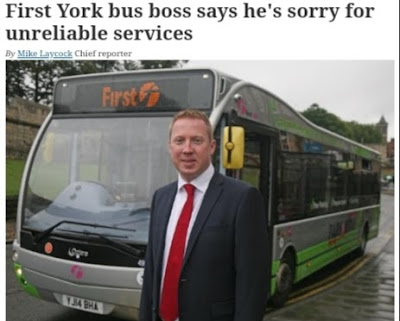 Traffic has been a problem in York since the great Eboracum chariot gridlock in October 75, caused by repair work on the A1, crowds attending the Beltaine market and a Roman Empire Brexit rally. 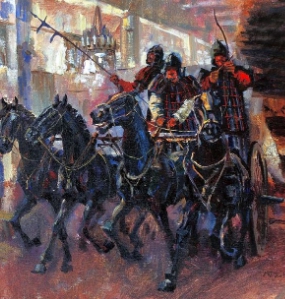 So when fbb saw this headline forwarded by correspondent Gordon, he has expecting First's key man to enter the usual blame game by suggesting that everyone else needed to "take action". But this article was somewhat different. fbb will just quote a few sentences and encourage his readers to try to understand what lies behind them.

So you are using computers rather than real people and common sense?

Some of our services have been negatively affected as a result, particularly services 1, 6 and 12, which have suffered reliability issues during the peak hours.

And it doesn't work! Quelle surprise!

First would be putting things right by making a further change to its timetables on December 1, and also by adding later journeys and reintroducing standard departure times for evening and night services.

Standard departure times - there's a novelty. Although how it circumvents wobbly technology is not clear.

At that point, the current timetable and real time information problems affecting service 12 will also be fixed and the various roadworks causing longer journey times are due to have finished.

So it will take another month to get the "real time" stuff to work? A MONTH???

An example of passenger dissatisfaction came in a letter to The Press from "a very disgruntled" Dave Matthewman, who said he went for a number 1 bus in Blossom Street ... 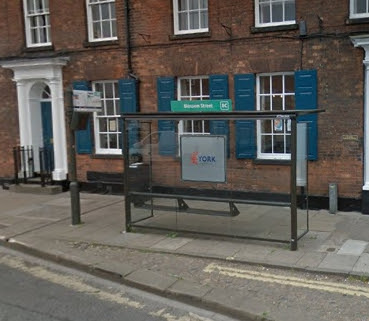 “Why didn’t somebody tell us?” he asked. “A lot of people were waiting but with the electronic timetable out of order we waited thinking it was late.”

[Dodgy journalism warning : Blossom Street is not a time point so this complaint, as reported, cannot be verified! 2311 for a southbound journey from the Station, one stop before Blossom Street seems about right?]

Now it looks as if First York have stopped producing printed material and we know that "it's all on line" simply doesn't work. How would Dave know to look for changes to his service. Presumably he has to scan the interwebnet EVERY DAY in case First have slipped in a subtle alteration.

Wow, who would have though that?

... and the firm had made significant progress over the last three years in improving both reliability and punctuality.

“We have done this through our partnership with City of York Council and using a more and more data led approach as opposed more traditional ways of scheduling our buses,” he said.

But it hasn't worked, so you haven't "done this".

I recognise that as we use advanced technology to do this, teething problems will occur and this has certainly been the case with the most recent timetable change.”

He also revealed that First would continue to make printed timetables available on demand for people who did not want the information online.

He said there was a variety of different views on the necessity of providing printed timetables and First needed to be conscious of the resources used and sustainability challenges, and also needed to consider that many customers had moved into the digital world.

... and were thus now missing their buses and as dissatisfied as Dave.

We have reduced the numbers of printed timetables significantly over the last 12 months against a growth of usage of our service in York. This gives me confidence that customers can access information about our services in more sustainable ways,” he said.

Except that Dave couldn't!

Nothing is more sustainable than a printed leaflet in the kitchen drawer at home or in the pocket of  a passenger. Good grief, the battery never runs out, you don't need a signal; you don't even have to log on.

It is however important that those customers who need a physical paper timetable can easily obtain one and we have therefore agreed with City of York Council and Visit York that printed timetables can be obtained on demand from the Bus & Visitor Information Point at York Railway Station or at York Visitor Information Centre on Museum Street.”

So you can queue up with millions of tourists and wait for harassed staff to print one out.

Maybe fbb has over-reacted to an article which may not be the full story, but it does look as if the First York boss is blaming the problems on technology. TOSH! The problem is bad management** - it always is!!

fbb is happy to print any corrections to his mis-interpretation.  ** Bad Management : fbb is very aware that management applies at all levels and the Boss of First York may well be constrained by poor management decisions at a higher level - even up to the First Group board. 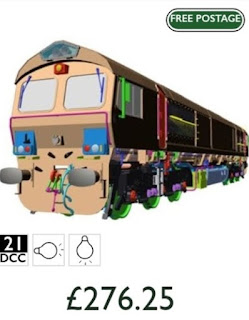 Seems bit pricey when you compare it with Hornby's class 66 ... 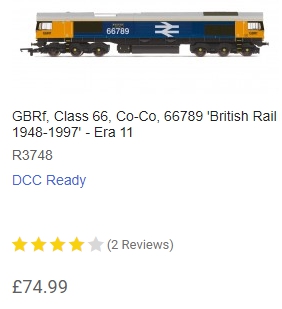 ... or even the newer more detailed Bachmann version. 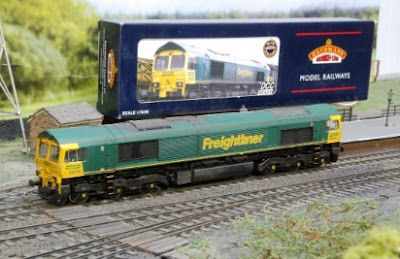 The difference is that the newest class 66 is for "O" gauge, not "OO" gauge, 7mm ti the foot rather than 4mm to the foot and almost TWICE the size (four times by volume).

The growth of ready to run "O" gauge stock at "reasonable" prices is one of the most remarkable features of today's model railway industry.

Don't worry, though; fbb mansions is just too small to accommodate an "O" gauge layout and fbb's meagre pension too small to buy one!

Tomorrow, the tale of an orange Twirl and mor stuff.

HEALTH WARNING
The posting of tomorrows blog may be delayed until mid morning due to "operational reasons".

Next Variety blog : Monday 4th December
Posted by fatbusbloke at 02:00