We are probably more familiar with the technology behind the electronic timetable frame than we think. Some of our technologically savvy readers may use e-book readers, the best known being Amazon's Kindle Range. (Other e-readers are available!!)

Prices vary but the end result is similar ...

... with a screen which looks like the page of a book but wrapped in a slim plastic box. The technology is referred to as "e-ink" or "e-paper".

So how does it work?

Like ink and paper, surprisingly. The ink is a gunk in which tiny tiny beads are floating. Some beads  (e.g. white ones) have a negative electrical charge, whereas others (black) have a positive.The beads are stored in tiny blobs, a bit like the pixels on your computer screen. 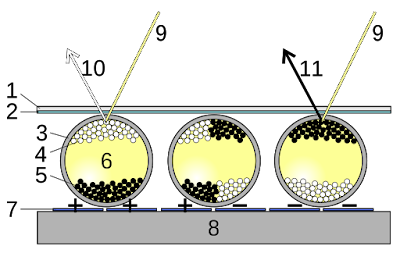 So all the clever stuff has to do is to "print" an electrical charge on the surface of the sheet containing gunk and beads. opposites attract and, sim salabim, you have a "printed" page.

Here is an explanation of the numbers.

Simple, isn't it? The system has one big advantage over the usual computer or phone screen. It uses very little power. This means that a solar panel can drive it even if the skies are cloudy.

The system has a disadvantage as well, namely that its "refresh rate" is poor compared with its techy superior brothers.

Scrolling text or pictures is not good. Effectively your best option is to switch the signal off and "create" a new page. Experiments with full or partial colour have not yet been entirely successful. 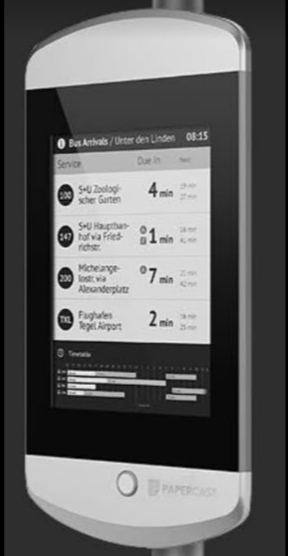 The simulation screen above is from Berlin with the famous "hunderter" 100 bus route from Zoo via Unter den Linden (a road name - "Under the Lime Trees"). 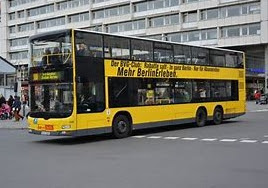 Presumably "Bus Arrivals" and "Timetables" would be in German on the real thing?

And here's one set up to replicate a London Buses "panel" departure list. 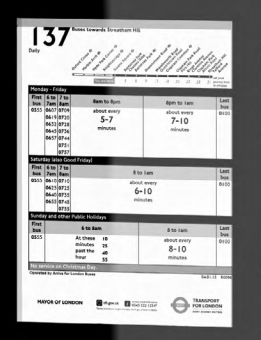 And they make 'em big as well!

And here's one in London, from a different supplier.

And here's one in Prague with incredibly small print! 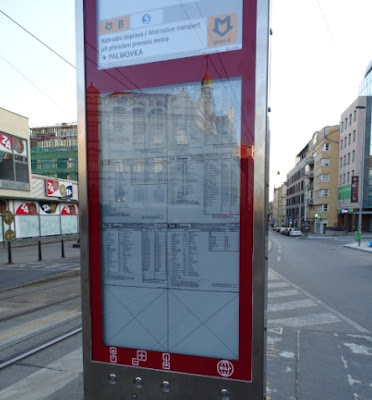 Pakmovka is a stop on the Prague Metro. 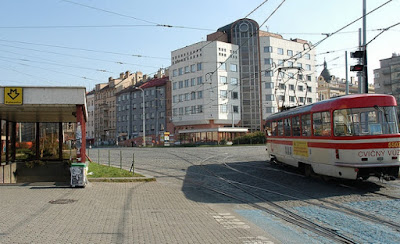 And here is a Papercast promo video to tell us all how jolly good it is.
What the company does NOT tell you is how much it is. It would be difficult to provide a simple figure as design of the display (in "The Cloud" we are told), links to existing data, number of units installed, installation costs (solar panels needed as well as a good WiFi connection), replacement of broken screens etc etc are all different for every system hung on a set of bus stop poles!

But now to Chesterfield where we return to the real world of bus stop information.

These pictures were taken on Sunday last three weeks after the timetable change about which they (Derbyshire County)  are/are not informing their passengers.

Here is the current display at stop B14 on New Beetwell Street. 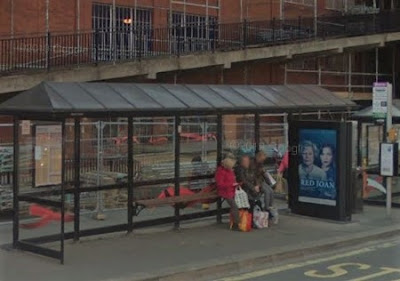 So here is what the timetable frame tells us today. 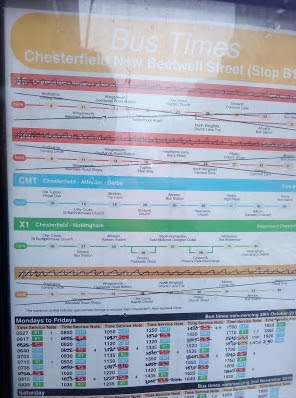 It is produced by a rather jaded set of software that has been in use for many a long year. There are many faults with the system and what it delivers, but that must be part of a subsequent blog. What matters here is that something is very wrong with the two services in PINK and the one service in PALE ORANGE; all three of them operated by Stagecoacoach.

These have been crossed out using one of those rather strange sticks with ink in it (called a "pen") with which, apparently, you could once create and edit text (it was called "writing") and even draw diagrams.

Not only have the headings been "crossed out" (another technical term from days past) but the computer system has delivered an unhelpful list of departures in time order, when, as we know, the passenger wants this list in route number order. 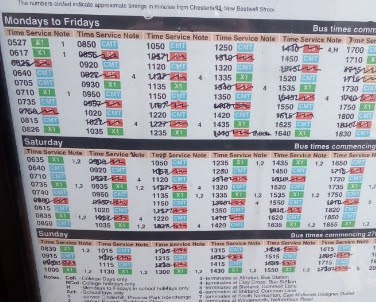 Here, once again, we see that ancient writing stick technology, used by a carefully trained operative, has been set in motion to expunge all mention of PINK and PALE ORANGE times from this frame.

No one seems to know how or why computer technology failed so profoundly in this case but we do know what has happened to the deleted information.

We know this from yet another example of this mysterious dark art from the past, sometimes called "hand" writing, added to the bottom of the display. Clearly the ancient system was seriously flawed as the notice is "difficult to read".

fbb will conclude this tale of high tech versus very low tech, expensive computer systems versus a ball point pen ...

... by looking a little further into the Chesterfield stop B14 technology failure event!