Time To Read An Improving Book (1)

There is not a lot on-line about author, and occasional correspondent with fbb, Keith Shayshutt. In 2010 he won an "unsung hero" award for his work in the development department at TrentBarton. fbb would suspect that Keith might find this historical event some thing of an embarrassment - unsung heroes like to remain unsung!

Equally embarrassing might well be the photo accompanying the citation ... 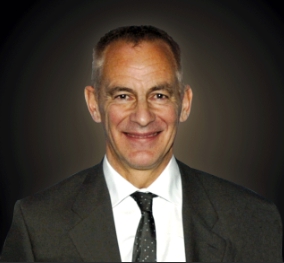 ... the Beloved El Presidente of the Glorious People's Republic of Ollianstan! But the text that accompanies the picture does reveal that Keith is a life-long dedicated bus man - and it shows in his recently published book. 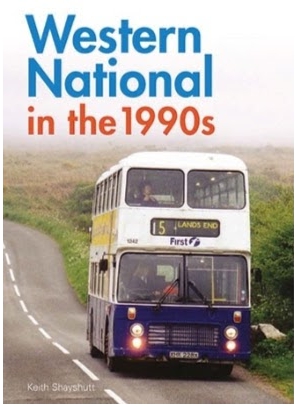 ... is something out of the ordinary. fbb was surprised and delighted when Keith offered him a gratis copy but, until it arrived he remained politely suspicious. So many bus books that appear these days are simply "albums", a collection of mildly interesting pictures perhaps with a slightly extended caption here and there.

David takes up the story in his Foreword.

The idea for this book was originally to be a photograph album of the decade of growth throughout the 1990s. It was not until I started writing the captions that I realised from my sketchy notes that I actually had quite an amount of operational detail. This led to further research ...

fbb is so glad it did!

The book begins with a potted history of Western National which itself is both revealing and helpful. There is a paean of praise for the Mercedes 608D midibus ... 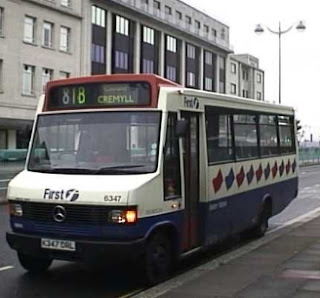 ... then follows a brief (fortunately) review of the fleet.

Chapter 6 forms the bulk of the book and it too is refreshingly "different". An "academic" coverage of this period might choose to do everything in date order - that would be logical - but Keith bases his history of the company's operations round a geographical framework. 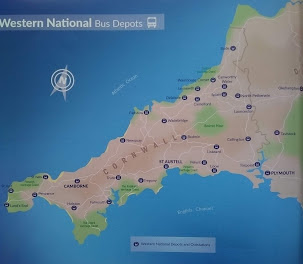 Each one of the blue dots on the map above is a depot or an outstation, each of which is covered in turn. The Penzance section shows a picture of the former depot ... 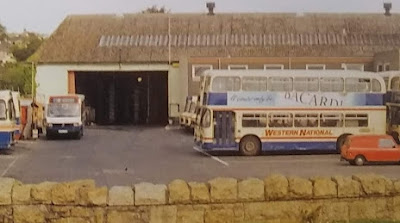 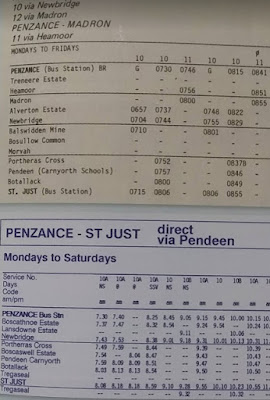 Whether enough revenue accrued from the increased frequency and thus increased costs is a matter of some historic debate, but maybe that discussion might need a narrative continuing on for another decade or so.

The 10 group comes with an excellent map, typical of all those in the book credited to Rob Bennett of GRM Mapping.

Thirty years on, the burgeoning frequencies have faded almost as quickly as they came. Service 10 became A17 in the great Cornwall re-branding but it had already been much simplified. Today's A17 provides a half hourly service to Heamoor with the full route proceeding via Newbridge (as route 10 above) and St Just before terminating at the Boscaswell Estate. 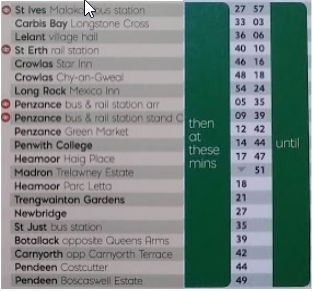 The map shows how "simple" the new service is - and how many small communities have no bus or a very long walk!

This review will continue tomorrow with a weird up and down bus timetable. ????

fbb's Obsession Continues
According to Mrs fbb, her hubby is in need of some therapy because of his obsession with OO gauge tank wagon models, an uncontrollable craze began when a chum send his a really old and battered Hornby Dublo 3-rail version from the very early 1950s.

Apart from a change of couplings the design had not altered since the wagon was introduced in 1938. 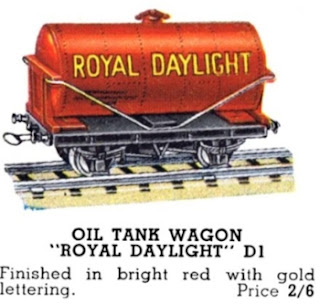 When Dublo realised that their competitors were offering better detailed models using plastic, the company introduced their SD6 range of so called super detailed wagons. 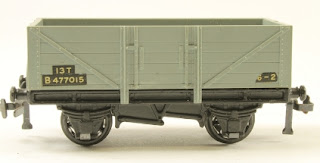 But they ran on the standard and very crude underframe with solid brake rigging. In the euphoria of the not very super detailed stuff, the tank wagon was totally unchanged. Even the two rail version used identical tooling as that from 1938. 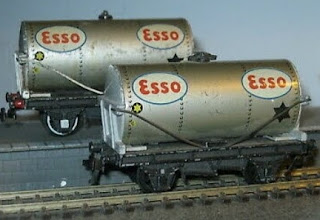 But the SD6 range did introduce a completely new design - the chlorine tanker. 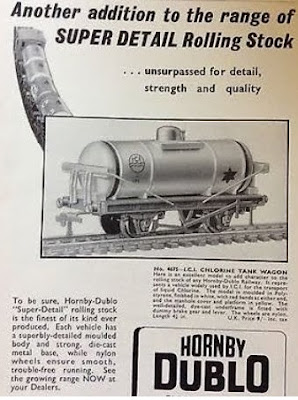 It rode on a new undercarriage with open brake rigging! fbb has been trying to buy one on EBay. Did you know that EBay sellers bid against themselves to force the price up? Oh yes!

fbb soon realised what was happening and stopped playing the "auction" game. He only buys fixed price stuff - no auction. But a Chlorine wagon never appeared EXCEPT on auction. Bummer.

fbb lost four auctions with either a silly high price (£15) or rapidly escalating sellers' bids. He was about to give up and put in one last LOW bid of just a fiver.

Your excited blogger, still obsessed, will report when it arrives in a few days.