On Monday 29th October, as part of the super-duper new Sheffield Bus Partnership, Stagecoach started the SL3 route linking Killarmarsh with the Sheffield Tram at Moss Way near the Crystal Peaks Shopping Centre. The service runs every 10 minutes as you can't see from the Stagecoach web site ... 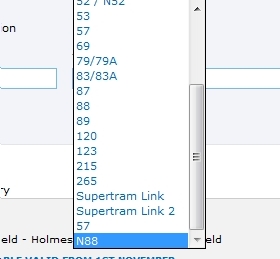 ... because it isn't there. Do you think the lads at the Stagecoach Holbrook depot know they operate it?

What is there, however, is service 89. This consists of two tendered journeys between Chesterfield, Holmesfield and Sheffield. Stagecoach offers the enquirer a timetable from 1st November ...

... sadly omitting the fact that (a) this is November 2010 and (b) that the service was withdrawn after operation on Saturday 27th October 2012. Best not to wait for it, then?

But we can all enjoy the benefits of the internet, can't we?

Many of these dubious benefits are negated if the technology fails to work properly. For the last few days fbb's broadband connection has been decidedly narrow. Like fbb himself, by the time the evening hours bring darkenss to our land, it gets very weary and achieves only a snail-like crawl. Sometimes it gives up completely. Please accept the fat bloke's profuse apologies if blogging fails; it's taking about three times as long to compose and upload a post.
-----------------------------------------------------------
For the time being, we battle on; now with the final episode from the Wigan wonderland. Our survey of what Sir Brian Souter has bought himself for Christmas concludes. 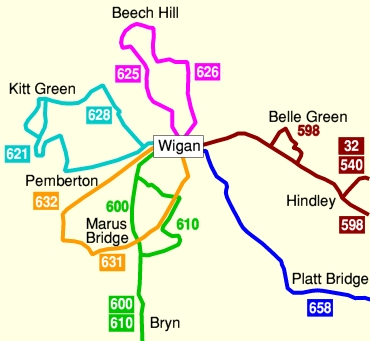 These two circulars are (together) First's busiest routes in Wigan, being every 12 minutes on 621 (clockwise) and the same on 628 (anti-clockwise).

Many other services penetrate the area, but the 621/8 provide the frequent core. The TfGM map shows something of the complexity of the various routes ... 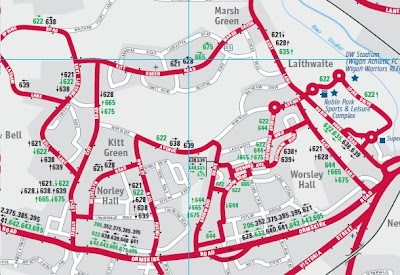 ... far to involved for fbb's brain and its ability to communicate in a short blog! 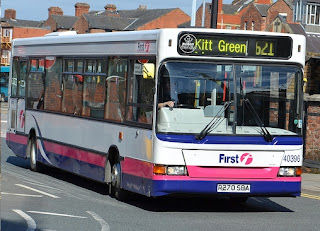 Kitt Green is, of course, famous as the home of Heinz Baked Beanz (and other examples of the "57 varieties"). The main factory was developed in the early 1950s ... 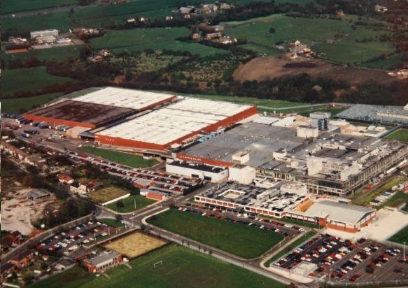 ... and oddly, as fbb penned this blog, he was consuming some breakfast beans on toast manufactured by competitor Branston. Shame on the chubby one because we all remember this:-
Don't you just want to punch the posh-voiced mum on the nose?

Another busy route (every 20 minutes in both directions), servicing several areas of housing at Worsley Mesnes, Winstanley and Highfield. Just reading the name one might expect Worsley Mesnes to be a quaint old hamlet clustered round a village green with a few chickens pecking hapazardly for snacks. Alas there is a pub and a long terrace on the main road ... 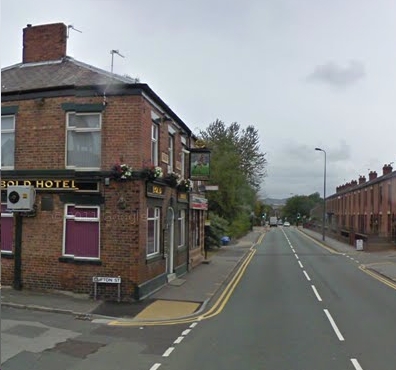 ... with modern development behind. The every helpful Wikipedia (?) tells me it is "a suburb of Wigan" and nothing more. 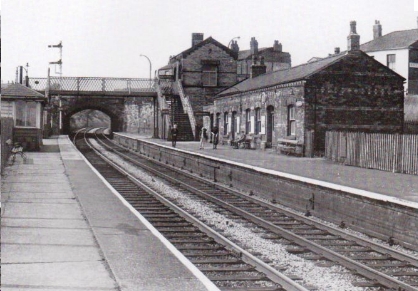 ... once with resepctable appurtenances but now reduced to bus shelter style. Trains run hourly between Wigan and Kirkby, where you change on to the Merseyrail electrics to complete a journey into Liverpool.

... which joins the 631/2 at picturesque Worsley Mesnes (!), diverts via newish housing at Hawkley Hall ... 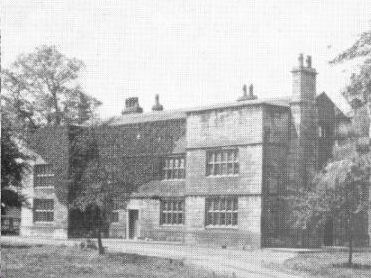 There was, once, a Hall at Hawkley Hall

... and continues via Bryn to the South Lancs Industrial Estate, where there is lots of, well, industry. 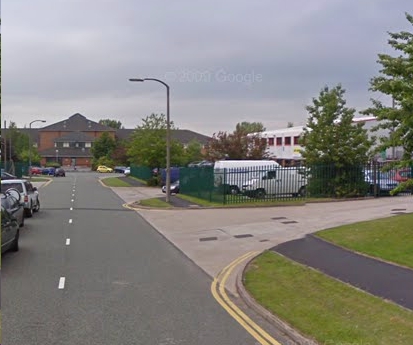 658   Platt Bridge to Leigh and the Higher Folds Estate

Another frequent route and the third option for journeys between Wigan and Leigh. Bickershaw's claim to fame is as the site of a Young Offenders Prison occupying land formerly used by a barracks. 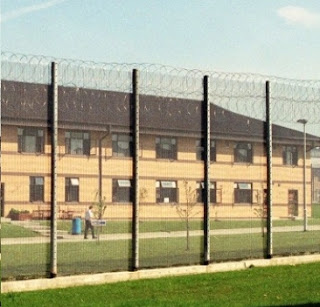 Hindley is a combined establishment with a regime that endeavours to provide positive opportunities for young people to gain qualifications and to address offending behaviour, whilst aiding them to reintegrate into society on their release. Regime provision includes learning and skills, workshop places including construction skills and physical education. Hindley also operates a listener and peer support scheme for those who may be at risk of suicide or self harm. Hindley has an in-patient healthcare facility and a mental health day care centre.

Thus we complete our survey of the Stagecoach acquisition. What will Uncle Brian do with his new toys? Past experience suggests we can expect a revised and simplified network, possibly with route branding, especially where other operators offer competition. But will there be expansion? Other nearby Stagecoach networks exist at Manchester, of course; but not far away is Chorley.