fbb is in Sheffield today 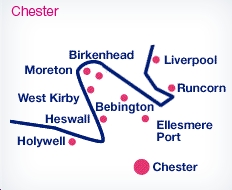 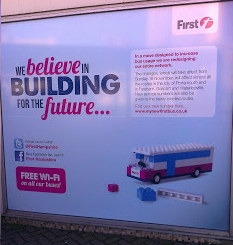 Actually done up a lot! 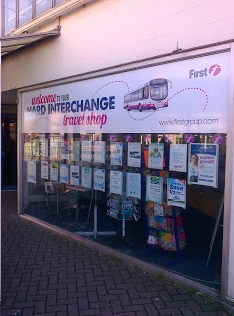 The only disappointment was that, with only a week to go to an absolutely stonkingly mega timetable and route change, the office was "Closed on Sundays". Surely there is an argument in favour of  being a bit more up front with enquiry office staff?

Positively, the office upgrade includes massive maps of the new networks in Portsmouth ... 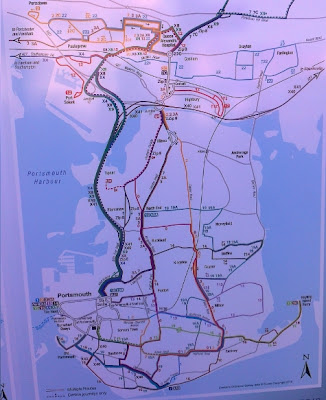 ... and neighbouring Fareham and Gosport. 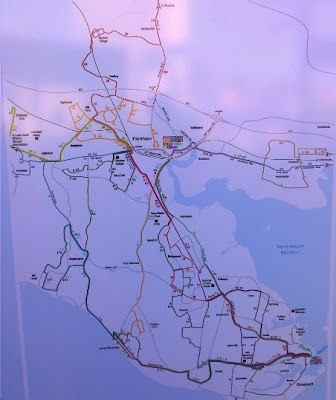 That's the Way to Do It!

In an innovative move, local communities will be able to partner with Southern Vectis and IW Council to run voluntary community bus routes to replace the current Wightbus local bus services. Since Southern Vectis floated the idea earlier this year, a significant number of local councils have come forward to deliver these schemes. The latest development builds upon that, with Southern Vectis providing vehicles and driver training, and the IW Council covering running costs removing any financial risk from the voluntary sector. The scheme is the first in the country, bringing together the resources and buses of a commercial bus operator with local community volunteer drivers to deliver services otherwise unviable to local communities.

That's the spin; in fact Southern Vectis received a chunk of the money that the Island Council formerly spent on its own Wightbus services and, at the outset at least, volunteer drivers to do the work. The number of volunteers is less than originally expected and at least one of the routes is almost all Southern Vectis staff. The Heron Line 34 ...

... seems to work like a community bus; no fares are charged but a donation box is available, but some of the others look just like a "normal" Southern Vectis service. Indeed on route 6 between Newport and Ventnor the operation is a strange mix of community and normal with volunteer staff now charging fares. 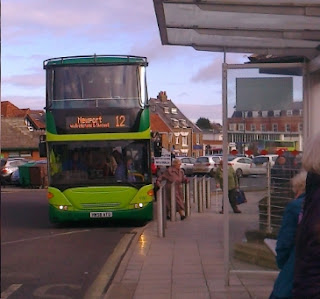 ... to Freshwater in West Wight and take a look at FYT bus.  [FYT : Freshwater and Yarmouth Travel] The first thing you notice is that all the stops have flags ... 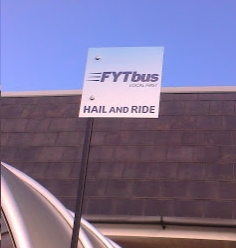 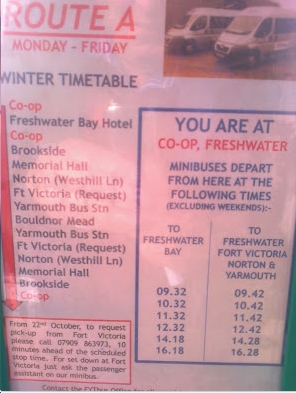 ... although at stops shared with Southern Vectis the flag is there but no timetable. Odd? Perhaps nasty SV would let nice FYT put their timetable in SV's frames?

There are, according to FYT, two routes A (coloured red on their map) and B (coloured blue). 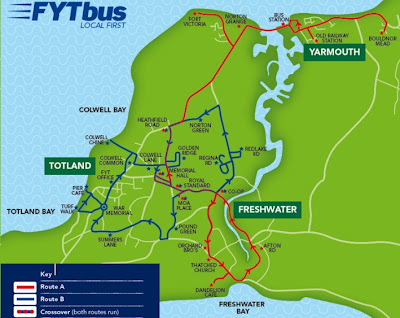 For some potential passengers [fbb included] that presents a problem because the routes operate via multiple loops, passing through the centre of Freshwater two or three times. A lady acquaintance of Alan, espied near a stop, said "I never use it because I can't understand the timetable." 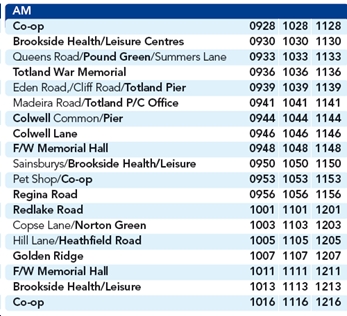 She's got a point. Whilst locals will rapidly get to know by word of mouth, new users might struggle. Blog readers are invited to match the timetable above with the map. It ain't easy!

But the big difference, the huge difference, between FYT and the main "community bus" scheme is that FYT is a real, unadulterated, community bus. Although funding has come from the County Council and local councils, some direct from government, the operation is entirely volunteer-run. 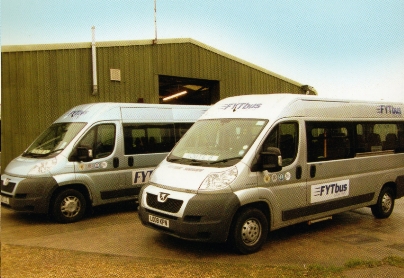 And each 14 seat bus has a driver and a "conductor" whose sole purpose is the assist the passengers on and off, with shopping and with advice.

That's what makes it special! It is local people serving local people. So tomorrow we look at a trip round the network as enjoyed by fbb and Alan. And enjoyed is the very word.


Next Bus Blog : Tuesday 13th November
Posted by fatbusbloke at 02:30