We are sorry to inform all our route C customers that we will no longer operate this route during Monday to Saturday daytimes from 25th November. Until autumn 2011 the daytime service received around £150,000 per annum subsidy from the local authorities but this was lost as a result of budget cuts forced upon the Councils. For the last year we have attempted to operate this service without any subsidy, but for a number of reasons this hasn't worked out. 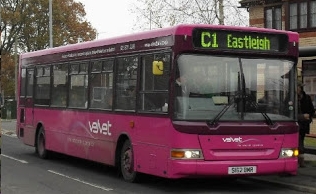 As a small family company if our revenue doesn't cover our costs we would simply go out of business and that can't be good for anyone, and this has led us to this difficult decision.

But, coincidentally (?), Velvet have also announced a brand new service from Hedge End to Southampton. It will be "numbered" (lettered?) "A" and will operate as a revision of the current route A which will no longer serve Botley. Bluestar 3 remains as Botley's route to Southampton. 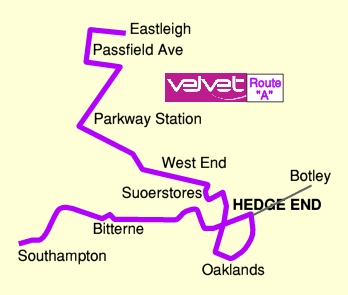 This is not the first time that Velvet have attempted to spread their wings from running Eastleigh local routes. One attempt to run between Eastleigh and Southampton was very quickly "seen off" by Bluestar's Beep Bus. 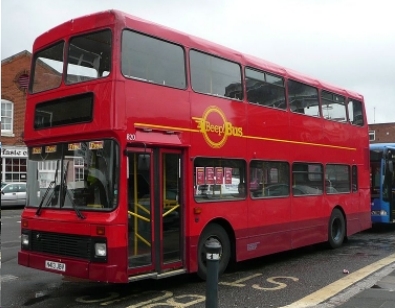 Both competing options were later withdrawn. So this time it is into the Hedge End market that Phil Stockley (Velvet MD) bravely leaps. His on-line efforts are clearly competitive ... 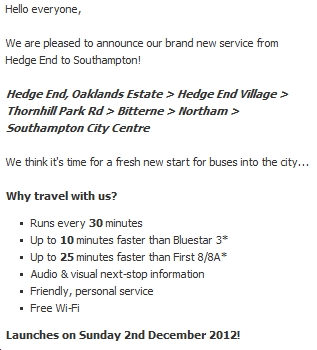 ... but provoked, in part, by the diversion of the former "direct" route of Bluestar 3 to run via Peartree and Woolston. 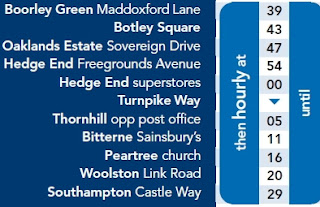 Also in the mix is First's 8/8A, again a slower and less direct option. 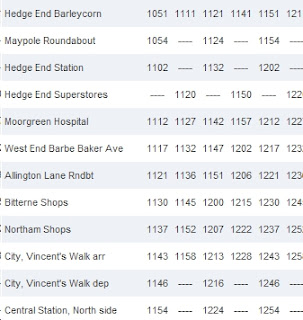 As is usual, Velvet's publicity is very professional, offering, for example, connections with trains to and from London at Parkway Station. 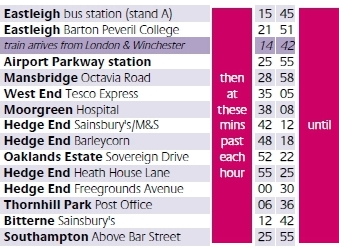 One interesting anomaly remains to taunt the potential user. In recent times Velvet has not run a Sunday service between Eastleigh and Hedge End; this privilege having gone to First on a Hampshire tender. 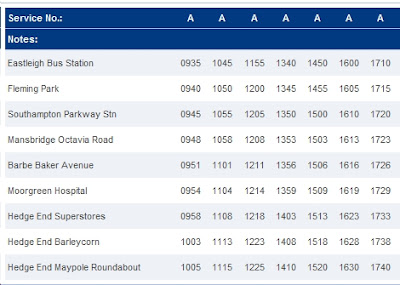 Meanwhile Velvet will be running their new "A" between Hedge End and Southampton only. This timetable extract shows the hourly timings (from Hedge End at XX22) which connect with First's A only occasionally due to the lack of "repeat pattern" of the latter.

fbb wishes his former colleague Phil well with this enterprise; but ...

There isn't much chance of Bluestar leaving him alone unless there is an unofficial (and illegal) "done deal" lurking in the depths of an Eastleigh pub's dark corners. Time will tell!


Next Bus Blog : Friday 2nd November
Posted by fatbusbloke at 01:31