A Little Tale of Littledale

Reading comments in on-line forums is good fun. The "South Yorkshire Transport" site contains stuff of general interest and sections with particular topics like "Bus Routes", "Rail Services", Rolling Stock" etc. etc. From time to time, fbb takes a look to see if anything exciting is happening. This headline appeared on the general interest section. 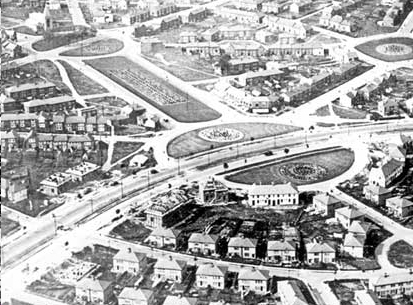 Prince of  Wales Road, Sheffield was built in the 1930s linking Darnall in the north with Manor Top (always called Elm Tree by Sheffield Transport) in the south. Most of it was dual carriageway with trams running down the central reservation. The Manor Estate, shown above, was, for its time, the height of luxury. 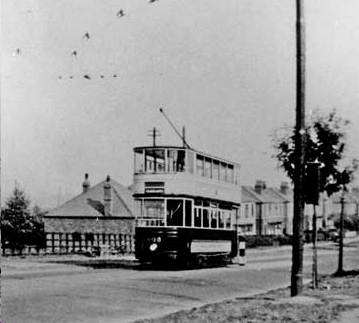 This tram is at the northern end and about to join the reserved track en route to Elm Tree.

Half way down (or up!) the road a couple of smaller in-fill developments were created. Littledale was started pre-war and completed in the 1950s. The block of roads by "A6102" is where it began ...

... and fbb's overnight "pad" is now located where Manor Farm used to be. Here is the area today from the air. 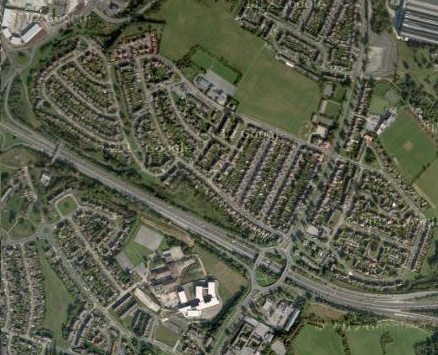 The Travelodge is bottom right of the roundabout and, just across the dual carriageway (Called "Parkway"), is another little infill named after the Bowden Wood. Both loops are served by route 6, although that piece of news cannot be gleaned from the timetable with no mention of the Bowden Wood side.

Nevertheless,  it is highly logical (?) that, seeking to return to Sheffield Station on Tuesday by an interesting route, fbb would aim to catch a service 6 and enjoy the beauties of Bowden Wood and the loveliness of Littledale. 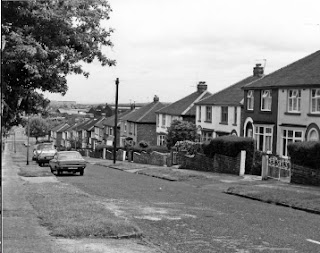 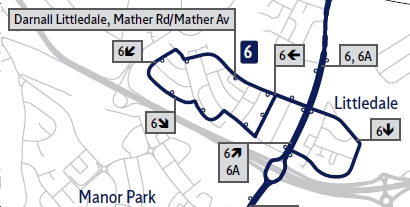 So, to get full value from his fare (of 0p) fbb hurried (joke!) to the stop at the start of the Bowden Wood Crescent Loop by the "L" of the wrongly placed "Littledale". Well it is Travel South Yorkshire, after all. 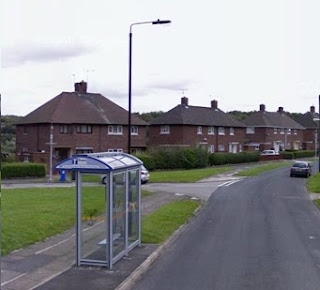 But belay that order cap'n; what is this that fbb espies in the frame at this well appointed shelter?

There are no bus services from this stop

So, after a few minutes wait, two other passengers arrived; then after a few further minutes came the non-existent bus. The two locals plus fbb boarded and travelled happily into the centre of the City. 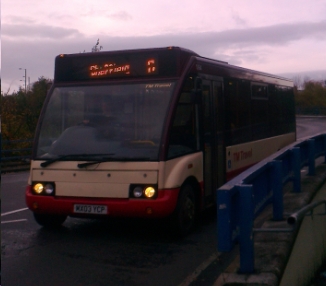 A clue as to the boob is given by a note on the timetable leaflet. 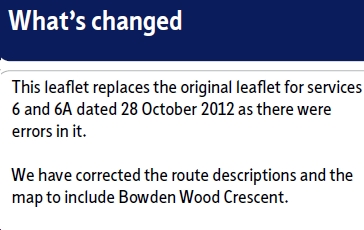 Yep. The lads had missed out a chunk of the route as can be seen on this extract from the "first edition" of the leaflet.

So was Bowden Wood Crescent omitted to save a few precious minutes of running time? Or was it yet another example of TSY staff not knowing where their own buses go? You decide! A close perusal of the replacement (corrected map) shows that the road has been added but the stops have not. Stops are marked by small, almost illegible, circles ...

... and on the corrected map, there they are, gone! And, for the record, Bowden Wood Crescent has always been served by route 6; never omitted since the start of the service.

Having spotted their map and/or data mistake, one might have thought that TSY would send a lad round on his bike to stick some timetables into the frames on the hitherto non-existent route. But, if the stops aren't on the database, even the revised one, presumably such a correction is impossible. The komputer is king!!


Next Bus Blog : Saturday 17th November
Posted by fatbusbloke at 02:00