The Map of Mystery Award [2]

The award to Travel South Yorkshire, often a previous winner, comes as no surprise to many observers of the industry. Ceremony attendees have been excitedly perusing the leaflet for services 35, 36 and 37 and contentedly debating the document's horrendous map. 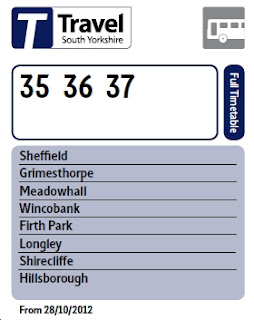 The chairman of the judges gives the appreciative citation.


"TSY has always been a leader in Mapping Mystery. Whilst there is a good and accurate network map produced on behalf of the new "Partnership" by Stagecoach ... 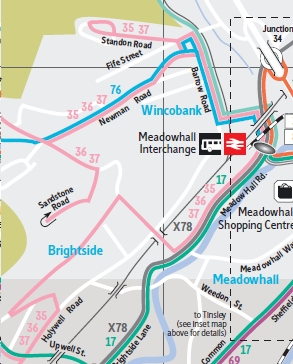 ... TSY's use of the Kartor software to produce line maps for each individual timetable leaflet has been the epitome of poor graphic design for several years. South Yorkshire residents are used to having no road names on their maps and inconsistent (often plain wrong) notes added by TSY staff to increase the obfuscation. But this particular item reaches new heights of uselessness. The full sized map can be viewed on the leaflet (here).

... itself a minefield of misconceptions.

"The same three routes are shown as arriving at Hillsborough Interchange after a circuitous saunter round the city's suburbs.

"On the way the 37 is shown (correctly!) as calling at the Meadowhall mega shopping centre ... 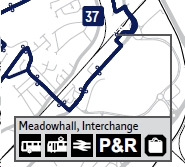 ... and at the suburban shops at Firth Park. 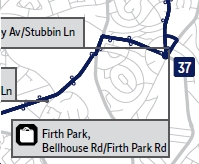 "In a move that truly epitomises the quintessence of bad mapping, there is no other mention of services 35 and 36."

fbb ponders the real possibility of yet another TSY wormhole, whereby the buses enter at Burngreave and re-appear at Wadsley Bridge. 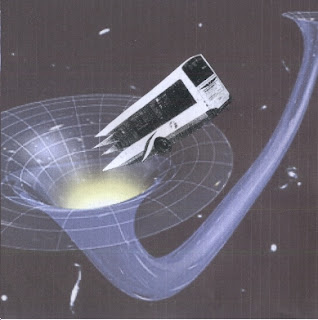 A brilliant fuel saving ploy, but not at all helpful for passengers seeking to travel on Monday to Saturday daytimes when the 37 does not run.

"I now call on our host Fiona Bruce to present the award to Bill Crump, toilet cleaner and litter picker at Sheffield Transport Interchange." Bill's  acceptance speech was brief and to the point and is quoted in expurgated version here.

"Thanks Fifi for this plague. It'll look grand on the wall of the gents at Pond Street. I suppose I'll 'ave to polish the bl**dy thing."

For the record the routes are really quite simple. The 35, 36 and 37 are all basically the same from City, via Burngreave, Grimesthorpe, Meadowhall, Wincobank, Firth Park and Shirecliffe to Hillsborough. 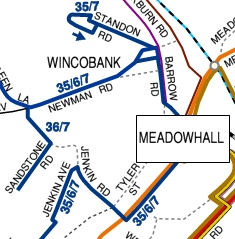 An fbb map extract explains all. 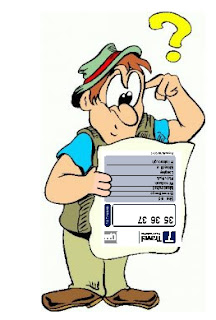 It's really quite easy, TSY, if you know where your buses run!
-----------------------------------------------------------------
P.S. Credit where credit is due!
One of the many anonymi who comment on the outpourings of fbb's feverish brain got a bit shirty with your esteemed author for being unkind to hard-pressed and overworked staff doing their very best in difficult circumstances. Absolutely! The changes in Sheffield are enormous with almost every service altering on the same day. There have been thousands of bus stops to update in addition to all the on-line and printed material. As young Mr Grace would say ... 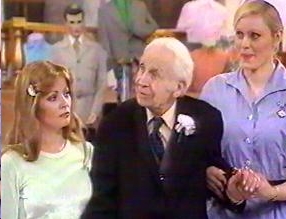 fbb's beef is with a management structure that is satisfied with poor quality and devoutly, but erroneously, believes it is doing a good job. One of fbb's favourite "mantras" is "never let the technology tail wag the information dog." TSY's mantra is "the tail is always absolutely right and the dog doesn't matter." Despite complaints from the public, the press and many with similar views to fbb, the "management" simply doesn't care. If it did, bad things wouldn't happen with such astounding regularity.

And there's yet another example coming tomorrow. It's a non-existent bus which fbb and half a dozen other passengers travelled on!

Next Bus Blog : Friday 16th November
Posted by fatbusbloke at 02:30