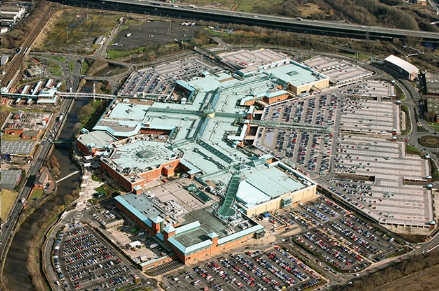 Privatisation and its associated bus wars and instability came while fbb was busy running a small bus operation on the Isle of Wight. Maintaining even a rudimentary knowledge of omnibological happenings in his former adopted City was out of the question. So what follows is just a hazy recollection. Meadowhell shopping horror complex opened in 1990 adding further complications to the saga.

Please note : this series of fbb
maps is diagrammatic ONLY. It aims
to simplify a complex set of data. 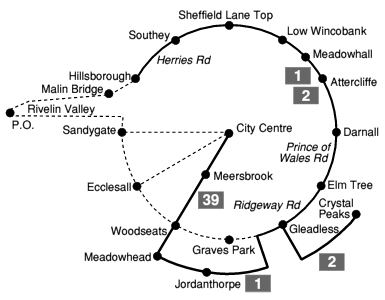 A further slice of the action was then removed to leave the 1 as shown working through on the 39 from Jordanthorpe into the city. This link was made (and broken!) on several occasions.

The final ignominy of the once-great Outer Circle came in July 2010 with a further curtailment to run from Jordanthorpe ... 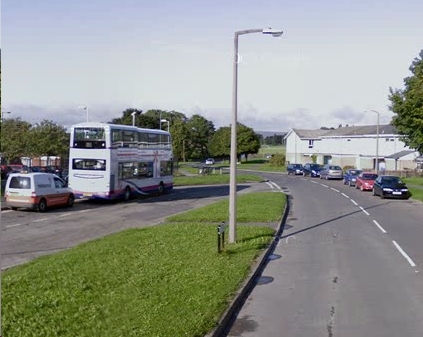 ... hourly to Meadowhell; joined by route 7 via Norfolk Park maintaining a half hour frequency from Elm Tree via Price of Wales Road to the shopping centre. 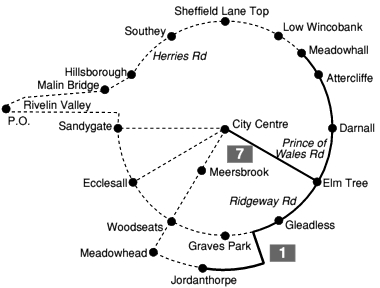 Other parts of the circle are mostly served by different routes with Manchester Road carrying only occasional country routes and Rivelin Valley Road left with a very minimalist route 64. 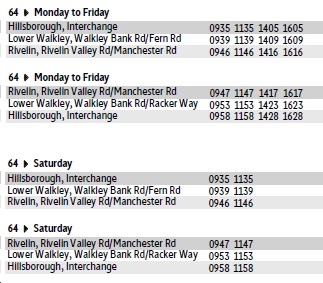 So, at last we come to the partnership's provision.  Route 17 dates from 1957 when it replaced a tram service from Sheffield Lane Top to City via Attercliffe, as shown in this 1961 map. 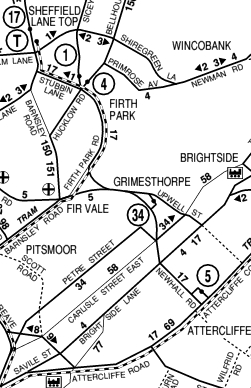 The route is barely recognisable today.

Immediately before 28th October 2012, service 17 ran from Meersbrook via City to Hillsborough, then via Parson Cross, Sheffield Lane Top and, using its 1957 route to Grimesthorpe, finished at Meadowhell. Route 39 ran from Jordanthorpe via Meersbrook to City. 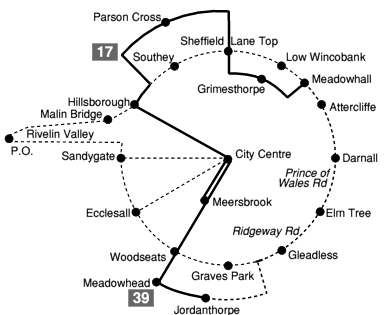 The 17 must be one of the most mucked-about-with Sheffield bus routes; having been extended at both ends at various times, diverted, circularised, uncircularised, linked and de-linked. A history of the 17 would fill several closely printed volumes and would be very boring indeed. [possibly even more boring than this blog?]

In all these alterations only the little bit  between Sheffield Lane Top and the Grimesthorpe area as shown on the maps has remained as unchanging as the Laws of the Medes and Persians. So take the pre-partnership 17, chop it into two bits and join it with what was the service 1 and you have created something like a new non-circling circular which is beginning to look like "déja vu" for a significant part of the good old routes 2 and 3!. 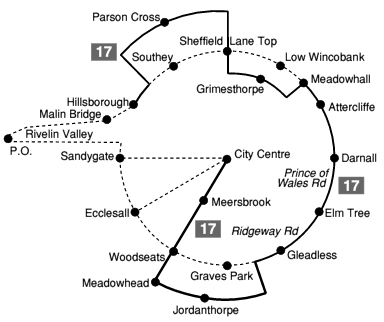 A ride from Hillsborough to City takes a massive two hours and 24 minutes which makes it the longest Sheffield City bus route since the demise of the 3 hour Outer Circle in 1970. The decircled route 2 took a modest 1 hour and 59 minutes as shown in yesterday's blog (read again). 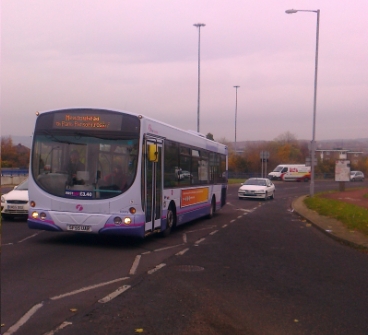 When the new 17 whizzed past fbb on Monday November 12th at 0930 it carried the heavy load of 2 persons. Maybe the 17 will be re-organised yet again?

But there is a point to this complex story. Will the worthy citizens of Sheffield be able to grasp the intricacies of this new route, representing, as it does, about the 5th re-organisation of these corridors in as many years? How many passengers are lost every time something "clever" like this is dreamed up by the scheduling teams?

And would it not have been a good idea to renumber the whole lot? Service 3 would have been historically appropriate. And, SYPTE, please don't tell fbb that you like to keep numbers intact for the benefit of the regular customer. You have renumbered the 72 Shirecliffe service as service 2 when the route hasn't changed one iota; it's just lost the end bit! 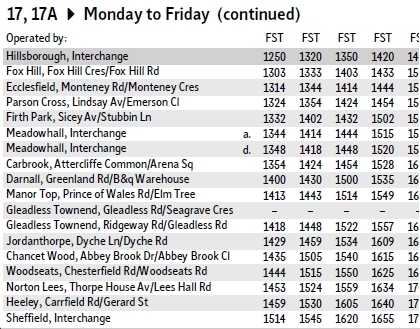 Alternativerly, the full service 17 leaflet can be explored (here). Enjoy!

And from Tom Robinson, of the Sheffield Transport Study Group, a memory of a "real bus" on the original Outer Circle snapped here at Elm Tree. 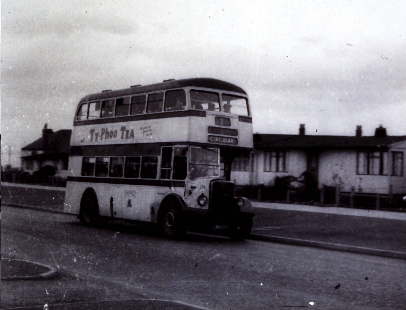 
Next Bus Blog : Wednesday 28th November
Posted by fatbusbloke at 02:30