Snippets from Sheffield : No 1
full Sheffield Blogs due next week
It's good to see fine examples of First's new livery in Sheffield. 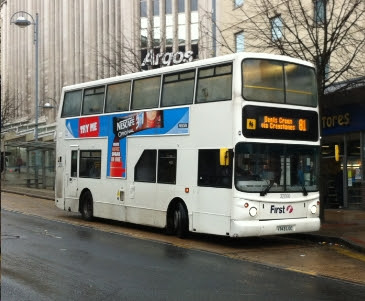 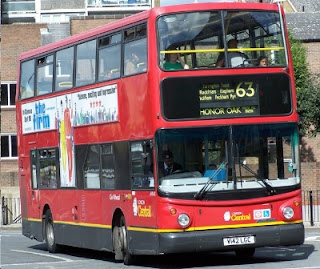 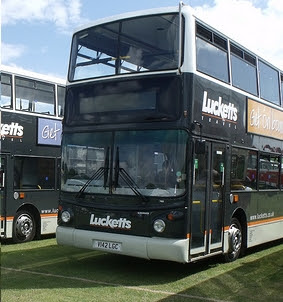 ... and has been with First South Yorkshire "in dealer white" since at least December 2011. It has also been "on loan" at First West Yorkshire. 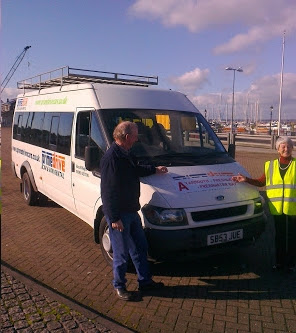 Arriving at the Freshwater co-op, fbb (and chum Alan) immediately began struggling wirh the FYT Bus [Freshwater and Yarmouth Transport] timetable. The "real" bus stops as used by Southern Vectis services are on the "town" side of the co-op roundabout as seen here by Streetview before the red and blue Co-op was re-rebranded as "Co-operative" in a spring-like green. "Good with Food" (Is that "goo-d with foo-d" or "gud with fud"?) 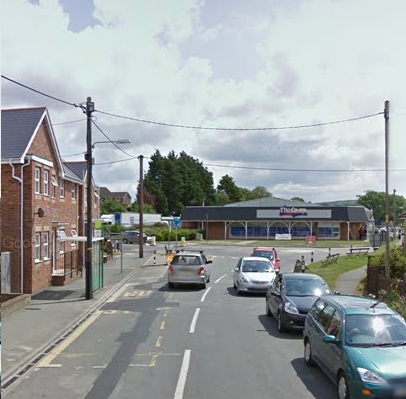 Incidentally, the co-op stands on the site of the former Freshwater Station, closed in September 1953. 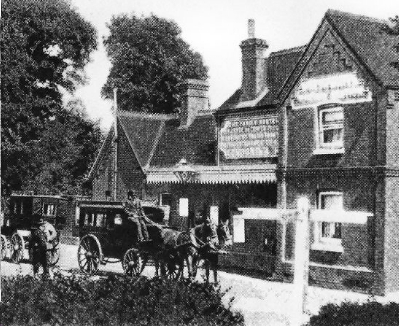 Beyond the co-op is a garden centre and its cafe is called "The End of the Line" and contains a selection of memorabilia from the "old days". It also serves good grub!

Anyway, back to the tour. Because of the confusion about where the bus actually stopped, fbb missed the loop via Freshwater Bay and caught FYT Bus on its way back. The driver (ex London Buses) and his sister assistant "do" Wednesday and Thursday mornings. There was just one other passenger ... 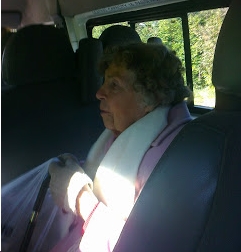 ...who had mobility difficulties. The bus diverted off route to take her to her door and, of course, sister assistant helped her off and waited until she was safely progressing to her front door. 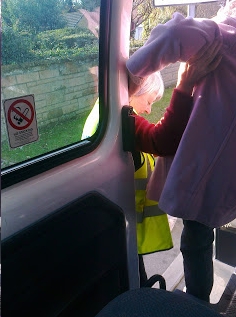 It would be tedious in the extreme to expound the minutiae of the various routes (to an outside it would be meaningless anyway) but it is sufficient to say the FYT Bus reaches parts that other beers buses don't reach! Here again is the map with its various twiddles and incursions into little housing estates that prove so helpful to the elderly and less able. 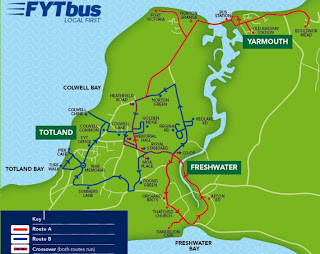 A larger version can be viewed on yesterday's blog (read again).

Up at Bouldnor Mead (top right of map) two goodies presented themselves. Our conductress reported that she has noticed closed curtains in the dwelling of a 92 year old, was able to contact a friend who checked and fund the resident alive and well after a lengthy lie-in. We also picked up two passengers who were waiting for a delayed Southern Vectis service after first ascertaining that the impending passengers could be successfully delivered to their desired destination by FYT Bus.

Oh, and sister assisstant delivers birthday cards to all their regular customers!

fbb and chum the transferred to route B and did a full circuit there. This was one  FYT's own buses and was a much better vehicle with a low step and more room for manoeuvering creaky bodies. It had three staff, one conductress being trained by an "old hand". 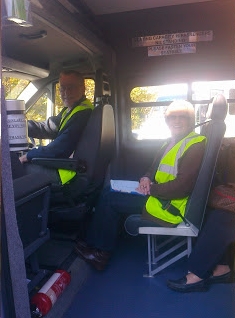 The comforting experience was repeated as your interpid correspondents toure more obscure corners of West Wight. Thius time an elderly passenger forgot to take her shopping with her, Spotted immediately by her in charge. "Stop the Bus" was the cry and the high vis vest sprinted up the garden with the errant bag of comestibles. 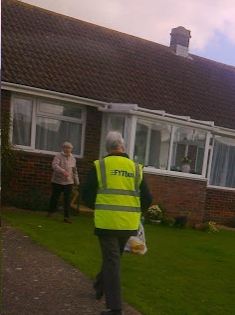 The whole excursion was magnificent in every way; experiencing a near ideal community bus service, truly and powerfully serving the community. Well done FYT Bus.

Just one little "but"! FYT does need to look at its stop names and timetable presentation. For example, the timetable on-line was slightly different from the times displayed at stops and the schedule held by the driver and conductress. The names on the map don't always match the names on the timetable. A little tidying up might encourage others to avail themselves of the service.

The big question, as always, is about the long-term finance. Income from old fogeys' passes plus the odd donation (a box is available) and the occasional cash fare (£2 adult, £1 child) will never even cover the daily running costs. The service will always rely on external funding. Politicians will always find it easy to withdraw cash for something which carries relatively few passengers. FYT Bus, despite volunteer drivers, has all the costs of a posh taxi with minimal income from users.

It would be very sad indeeed to see FYT Bus die at some time in the future. For the time being, it's a cracker!

Next Bus Blog : Wednesday 14th November
Posted by fatbusbloke at 02:28