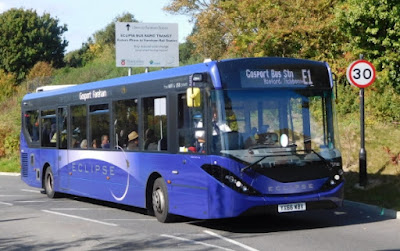 ... occasionally the Press does realise that there is Good News about buses. A columnist in the Portsmouth local paper (The News) has taken a drive - in a bus - along the "Eclipse" busway that links Gosport with Fareham and is run by First Bus.
This is an extract from his piece:- 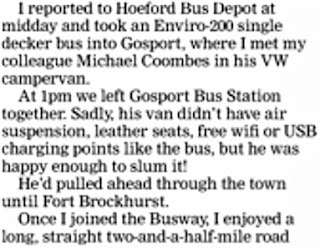 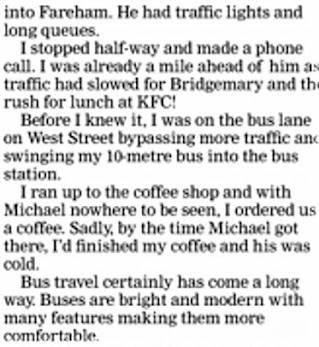 Now that is a good piece of positive writing.
But More Usually ...

It is absolutely astounding how many politicians think they can run a bus service. It is even more astounding to realise that said politicians simply do not understand that First Bus and Stagecoach are running a business for the benefit of their shareholders who provide the money to run the show!
There may be other ways of running buses but this is how it is at the moment.
As usual, fbb adds his comments to the report - a report which will delight Dan's fans.
In a letter to Janette Bell, managing director of First Bus and Martin Griffiths, chief executive of Stagecoach, Mayor Jarvis urges them to reconsider recent decisions which affect bus operations in the region.
Nobody seems to know what these "recent decisions" are, but we ALL know that cut-backs and fares increases are commercially inevitable. Like gas prices!
Mayor Jarvis urged both operators to act more in partnership with the South Yorkshire Mayoral Combined Authority ‘to take some responsibility for the wider health of public transport which you say you support’ which is ‘implied’ in the consultation towards an Enhanced Partnership.
And mess up their business?
Mayor Jarvis said: “Operators appear to be acting according to one concern only: their short-term bottom line. You are rushing to cuts even as Covid rates remain high and many people are still working from home."
Seems sensible business practice if the passengers really aren't there?
“Rather than maximising the chances of a full recovery in passenger numbers, by hiking fares and slashing services at the earliest possible moment you are guaranteeing that recovery will not happen – locking in damage from Covid that might otherwise have been temporary."
"Hiking and slashing" is a bit too emotive without any corobative detail.
Dan is, in a rose-tinted glasses world, right about the plan, of course. BUT, someone's got to pay the bills. It is either the passenger through fares, or everybody through taxes. It is a stark choice!
"If we want to realise the potential of our buses, this is strategic short-sightedness of the worst kind."
So put up the council tax and pay some of the bus bills that way, Dan.
“But let’s not forget that your company received millions of pounds of subsidy to keep services running – at a profit – during lockdown. I am not asking companies to bankrupt themselves operating at a loss indefinitely, but the least South Yorkshire has a right to expect is that you reduce cuts and fare rises to the minimum as we get back to normal, even if that means reduced profits or even a short term loss."
So Dan wants First and Stagecoach to bankrupt themselves temporarily? It doesn't work that way in the real world.
“It is time to give something back – and that means cancelling the changes that are currently being planned.” 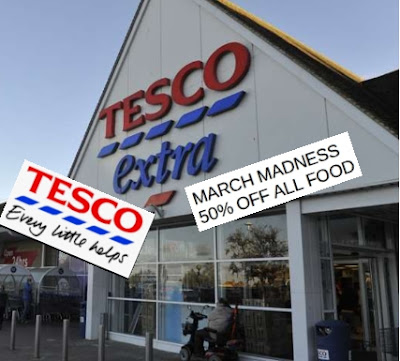 You wonder what the reaction might be if Dan the Man popped into his local Tesco and suggested that they give half price food out for a month to help local residents cope with increased fuel bills!
The tough fact of the economics of business is that PROFIT is what is left after ALL the bills are paid; and, for a PLC (Public Limited Company), the profits are distributed to the shareholders to offer them a return on THEIR money which keeps the company in business.
Last year Stagecoach profits were relatively small. 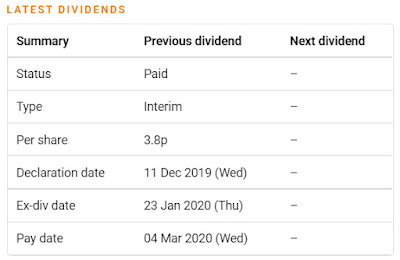 Currently Stagecoach shares are about £1, so for every £1 you invest, you get 3.8p less tax which varies according to your total income. You can be left with, as Paul Daniels used to say, "not a lot!".
First is Worst! 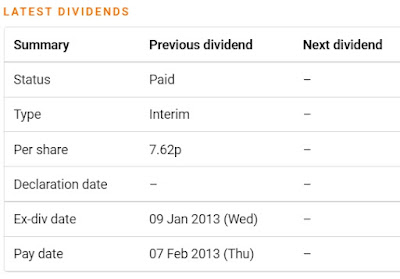 The group last paid a dividend to shareholders in 2013!
So Dan really doesn't get it! The bus companies are not making (implied) large profits.
In one sense, Dan is right. SOMETHING needs to be done to help the public transport industry SURVIVE in the next few years. The big question is what - and who is going to pay the bills.
Answers on a postcard, please to :-
Rishi Sunak
11 Downing Street
London
SW1A 2AA
fbb is sure he would love to hear from you. 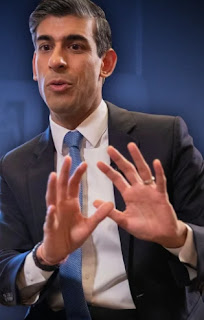 Or maybe not?
More sort-of political stuff from DaFT in tomorrow's blog. Now that will be worth waiting for, won't it?
P.S. Whatever happened to the Dan Jarvis report that was going to bring dramatic improvements to the bus network?
Platinum?
Once upon a time a Diamond "Jubilee" was 75 years, but Good Queen Victoria made sure she had one by downgrading it to 60 years. The true colourless Jubilee, celebrated way way back in Old Testament times was a happening every 50 years.
But with HMQ outliving all the modern Jubilees, we now have Platinum for 70. But we are running out of metals! Scientists tell us the Nihonium is "probably a metal", so that will do for 75 years.
The stamps are out, both pictorial ... 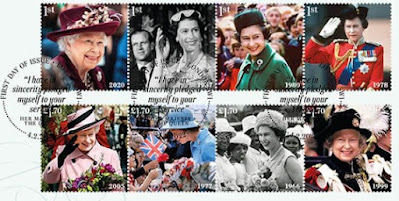 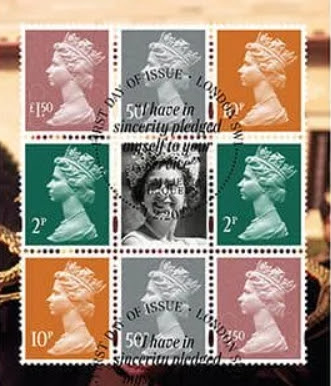 But there is no plain and simple 1st or 2nd class stamp in a "platinum" colour (whatever that might be). It could be a shiny reflective silver-grey!
The Royal Mint has issued a wide range of coins with a pack of three gold sovereigns at £1800 being one of the higher priced goodies. 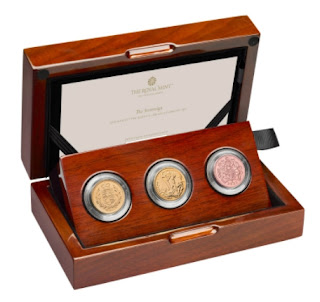 And Reading is the first to outshop one of their buses ... 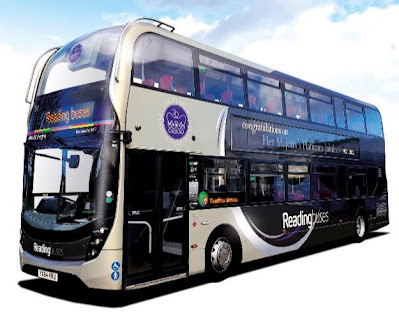 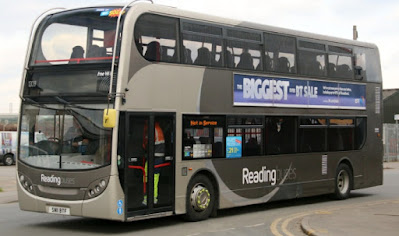 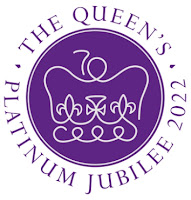 Interesting Interchange Inadequacy?
It used to look like this. 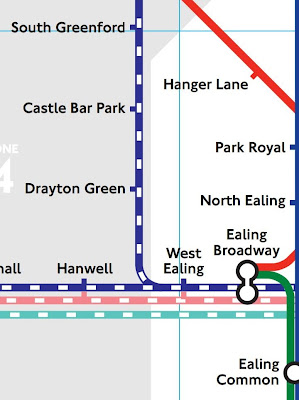 The dotted line is for GWR local services from Paddington (DARK BLUE); then two things happened.
The Greenford Branch  became a shuttle from West Ealing ... 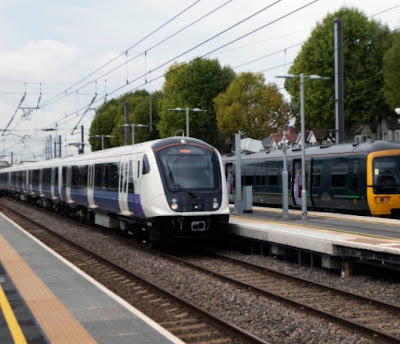 ... and the stopping service to Reading was taken over by TfL Rail a k a Crossrail a k a The Elizabeth Line. So to get from the Greenford Branch to anywhere except West Ealing you need to change to the Elizabeth Line.
Normally "interchanges" between Underground and National Rail are shown as white blobs with a black edge, linked by a diagrammatic representation of a tunnel or bridge also in white with black edges. The graphic is seen below at Ealing Broadway.
Note that TfL/Crossrail/Elizabeth (DARK BLUE) is a similar colour to GWR (DARK BLUE) and the Piccadilly Line (DARK BLUE) ! 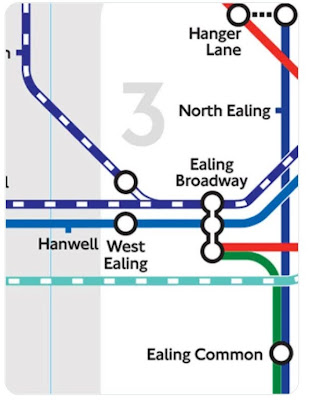 But there is no graphic link between blobs to interchange along at West Ealing.
It would be easy to correct, especially when the Elizabeth Line turns the proper shade of purple, by simply swapping the GWR and Elizabeth Line routes.
Seemples! Done by fbb but very VERY rough! 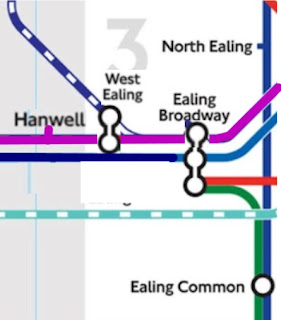 fbb did not have time to make the GWR line dotted** - but the colour swap works at Paddington and all the way to Reading.
** Confession time - he does not know how to do dotted lines on this bit of computer cleverness!
P.S. A Bit More On The 84
See previous blogs! 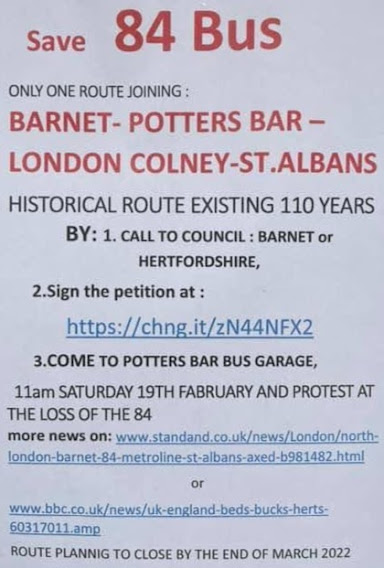 Next Variety blog : Sunday 13th February
Posted by fatbusbloke at 02:00