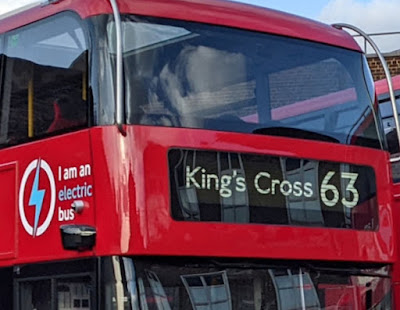 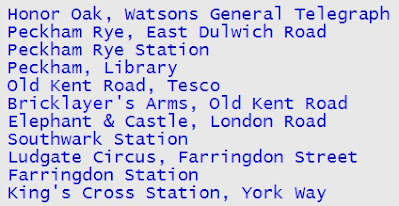 ... and Transport for London (TfL) agrees that the 63 terminates at Kings Cross. 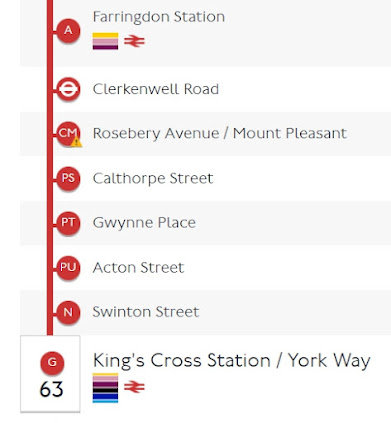 But, again, according to Robert ... 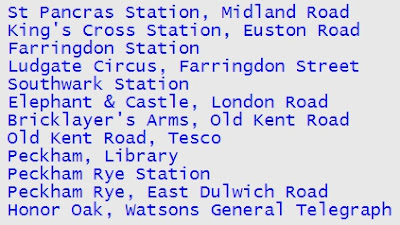 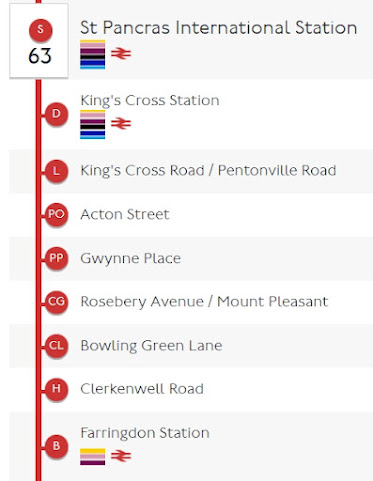 A knowledgeable London bus passenger will understand straight away.
But an average apprehensive arrival might apply an anguished approach. The problem is simple, really; the problem is caused by the sad fact that neither St Pancras nor Kings Cross has a bus station.
So after hours and hours of painstaking research (well, a fair amount of Monday's non-domestic time), fbb can inform his excited readers that he has resolved the problem.
We can therefore (virtually) arrive at Kings Cross, namely the York Way stop, which is located on the east wall of the main line station. It (the stop, not the station!) is not very imposing. 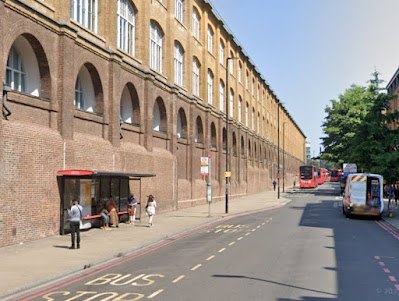 The east flank of the station is, however, rather splendid. But if we proceed further along York Way, we may espy some big red buses peacefully grazing. Lo and behold ... 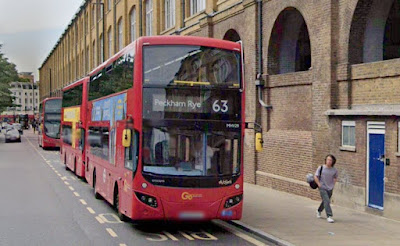 Pre Abellio as operator, we see several 63s lined up next to a little lean-to which is, probably, staff toilets.
But we can now do what passengers cannot as they have been turfed out at the York Way shelter. Thanks to the wonders of Google Streetview, we can drive, in our imagination, further along York Way, gazing lovingly at the roof of Kings Cross as we pass by. 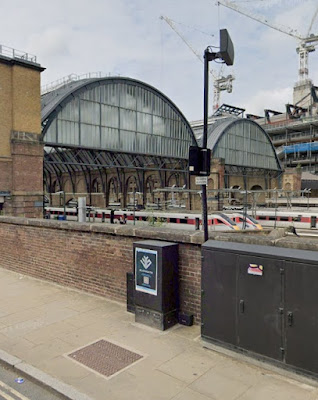 We then hang a left at the lights into a road called Goods Way ... 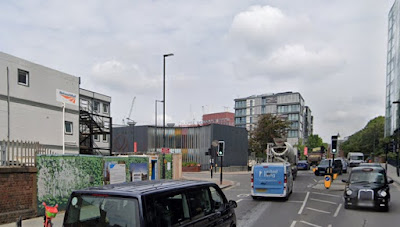 ... so called because it was once the "Way" that "Goods" found their path into the extensive freight handling facilities at the two terminals. The line of the road has changed ... 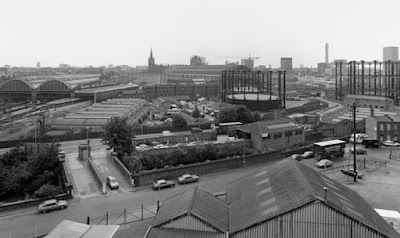 ... but you can get the broad picture.
Soon the great slab of the International platforms at St Pancras appear ahead of us ... 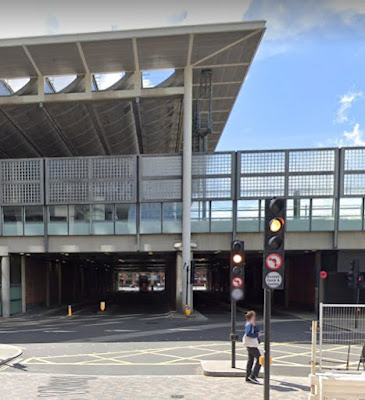 ... at whIch point we plunge into a tunnel under the tracks. 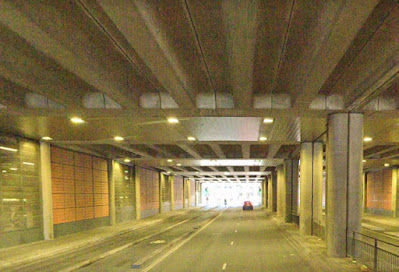 At the tunnel exit we turn left again and we are in Midland Road. On our left is the magnificence of St Pancras, and on our right is the remains of Somers Town Goods Yard. 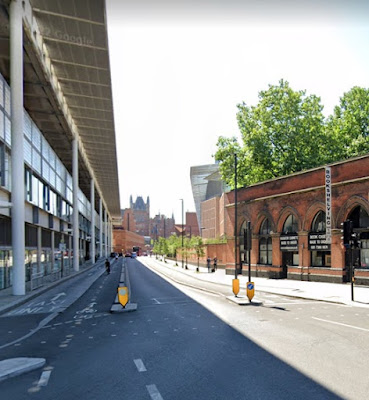 As we virtually drive our imaginary passenger-free 63, we can muse awhile about how it all used to look, as below. Reading from left to right we have Somers Town depot, Midland Road ... 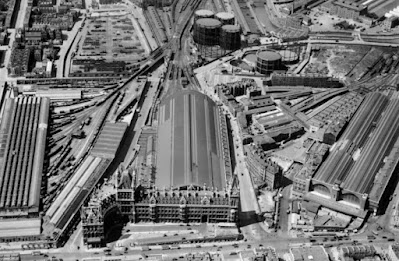 ... St Pancras Station, Pancras Road, Kings Cross Station and lower right, just a titchy bit of York Way. You can spot the old alignment of Goods Way creeping between the two sets of gas holders. It has changed a bit! 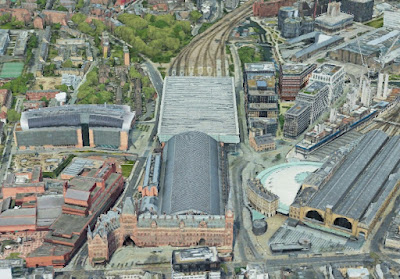 But, there on Midland Road is the shelter from which the 63 starts its run southwards. 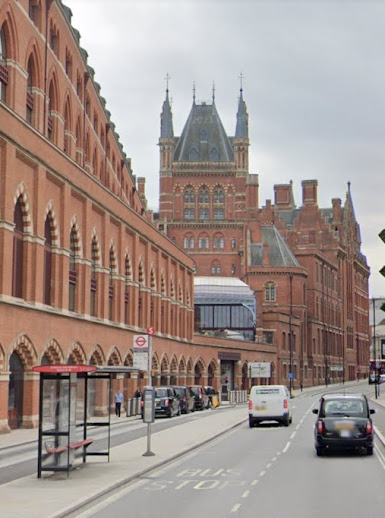 And, looking back in a northerly direction, you can see one of the main exits from the various bits of the station ... 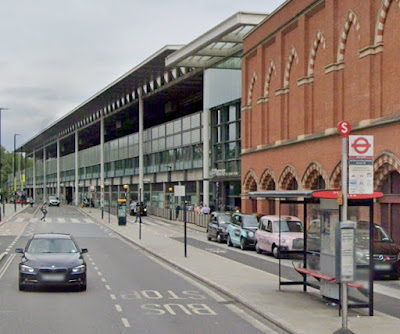 ... thus providing you with and easy route to the service 63 stop and the pleasure of the all-electric buses - London's "Future Bus". 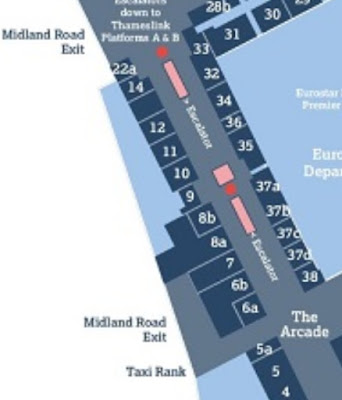 After leaving the Midland Road stop, the 63 then stops right in front of Kings Cross station. 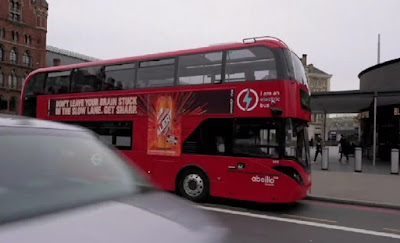 You could find much of this if you download the "Spider" map for Kings Cross. It is a bit tricky as a search on-line only produces the Night Bus information! 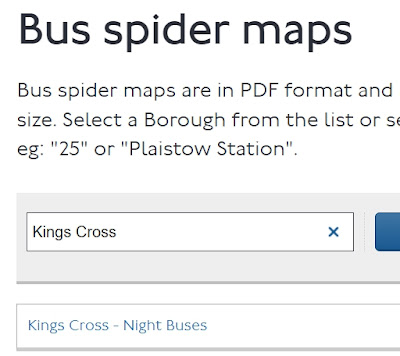 Great.
But if you search under "Islington" (obvious innit?) you can ... 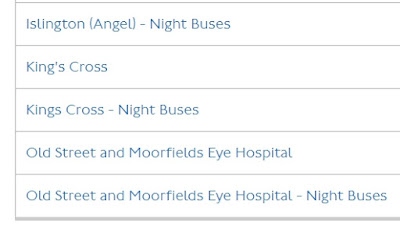 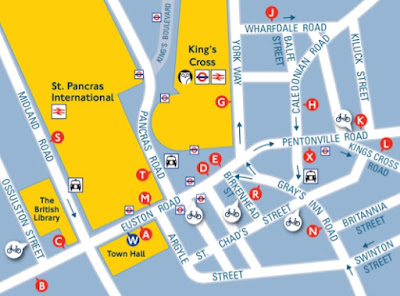 Then to find out which stops are served by the 63, you have to find the end of the 63 route where it disappears off the map. (Obviously).

Note that the wrong name is used for the pub at the Honor Oak terminus, but you cannot really expect TfL to know where its buses turn round. Stop D is outside the front of Kings Cross, L is on Kings Cross Road and S is the Midland Road stop where it all  begins.
Can things be made somewhat easier?
fbb thinks they can, and is working on a solution. More to follow in due course!
The Future For Route 84
To be withdrawn by Metroline at the end of March, this historic service is to be saved, in part; thanks to Sullivan Buses of South Mimms. 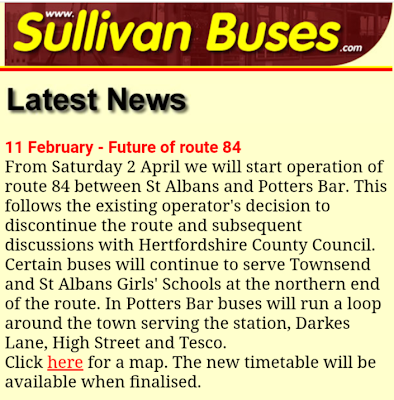 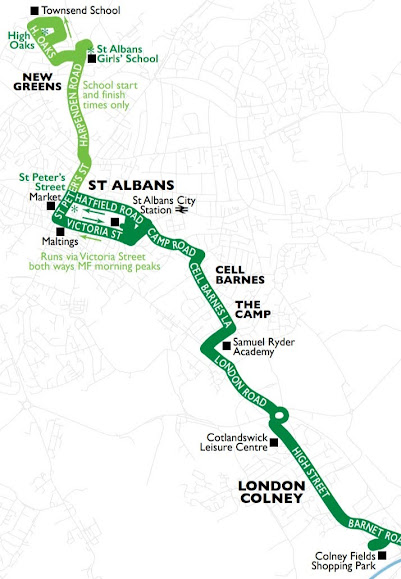 ... and the continuation from the London Colney retail park (inc Sainsburys) which we now know is called Colney Fields. Sweet!

The new 84 goes no further than a loop at Potters Bar, leaving the road south to Barnet bereft of a bus service.
No timetable is yet published, but bus watchers reckon that an hourly headway will replace the present half hourly times, meaning the service can be run with two buses in steam.
Lets hope Sullivan can make it work, and more importantly, make it pay!
A few more London snippets tomorrow including another servicer equipped completely with electric buses.
Next Potter Bar etc blog : Thursday 17th February
Posted by fatbusbloke at 02:00