“Encouraging more people to use the app would be fine if the app was reliable but it's not,” BathCommuter wrote.

“I've had other people pay my bus fare because the app wouldn't work and I didn't have any money on me and the bus driver wouldn't let me board. I've missed busses because the app is slow and full of glitches.

“I've now deleted it from my phone. It doesn't speed things up. Most days there are queues of people waiting for the app to work or arguing with drivers about how terrible the app is.”

MoeXXX said: “Bath is barely 5 miles across but has as many fare zones as London. I have a better idea how much a bus journey costs in Bristol, Sheffield, Southampton and Edinburgh than I have in Bath, despite living here.

"Why do First make it so complicated? Because they can. If they really wanted to reduce dwell times they would introduce flat fares.”

InspireBath wrote: “They really need peak & offpeak pricing at least. It's totally crazy that you can park for 2 hours in Southgate for less than a single bus fare - let alone for a couple or a family. They wonder why people use cars!”

Anorak posted: “Ok, it might speed up boarding times but the buses actually need to run first.”

A spokesman for First said the company disputed the critical claims made by Chronicle readers.

"Also we found that for as little as £1.50 a week you can own a phone compatible with the mTickets app. Also, the Touch Card is available where savings can be made. For instance, Single tickets can be purchased as a pack of five for £10.

"If someone was to do this many single transaction with cash from the driver it would cost £12.50. However, there isn’t an option to buy day tickets on the Touch Card.

"Regarding the mTicket app, in a recent survey of over 1,500 bus passengers, 96% of respondents would recommend the app to colleagues or friends. So for the most part, the feeling towards the app is positive."

If you can persuade people to use electronic payment systems, even if it doesn't necessarilly speed up entry, it does mean you can increase fares without anyone really noticing. Savvy passengers will be aware that all these "schemes" are designed to make more money for the company, money that it needs to pay their bills which, like ours, are increasing all the time.
The idea of "persuading" folk to "use the App" by charging higher cash fares was a common theme and is practiced mightily in London where most passengers using their card haven't a clue what they are paying.
So in 2018 things changed with First Bath, Bristol and the West of England, quite radically and a posh leaflet was issued to inform the customers. 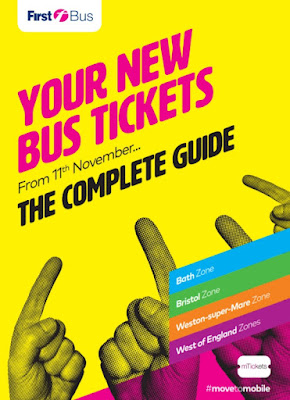 Flat fares arrived but still with a higher price (quite a lot higher!) if you were sinful enough to want to pay with money.

There was strong pressure to use App-ropriate technology. 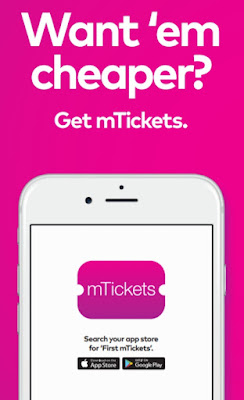 That is a penalty of about 23% for those who don't have an App (visitors), can't use an App, don't trust an App or prefer to see what they are spending. That is quite a lot of First's customers.
Roll on to 2022 and the flat fare is now £2.20 which is not too bad, inflation-wise ... 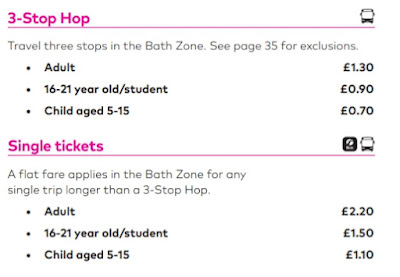 ... and there is now no penalty if you are wayward enough to want to hand over specie to the man at the front. The cash fare is 30p (that six bob in real money!) cheaper than is was in 2018.
Of course, the two panels above illustrate the unpleasantness of flat fares when you cross a zone. Three stops are £1.30, but one stop more and you are fleeced for almost a quid. OUCH!
When fares went up in stages ... 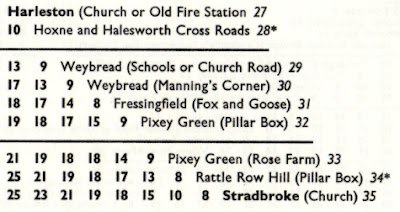 ... there was less pain when you crossed a fare stage.
The other problem with graduated fares is that they do not sit easily with electronic payment. Effectively you have to ask the driver for the fare, wait while he manipulates the ever-increasing complexity of the ticket machine keyboard and only then can you tap!
No faster than issuing a ticket! Bring back Setright Speed for (there is a clue in its name) speed of ticket issue. 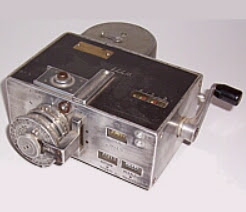 Bell punch Ultimate was even faster. 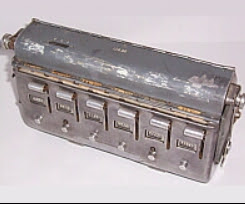 On the other hand, if flat fares are mitigated by good value day and week tickets, the pain can be less. But, generally, flat fares do discourage short-hop journeys.

One solution is TOTO, tap on, tap off as introduced by First in Leeds. There was a rumour that the First Bristol company was going to abandon flat fare completely and move over to TOTO - but it seems this is not happening - yet!

fbb will now take a look in more detail at First's 2022 fares leaflet with its even more garish cover! 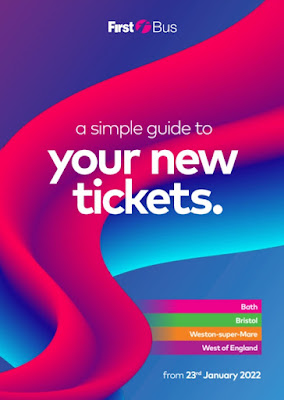 It is in four sections, and is colour coded. 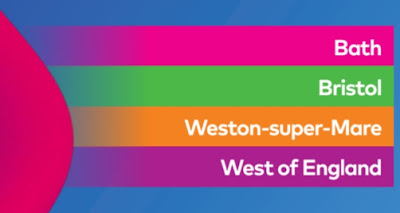 Although fbb started with Bath, largely because of the previous press aggro, he will move on to the Bristol area as he knows more about the geography of Bristol than Bath, No 1 son having lived there for a few years.

The leaflet has a couple of pages of guff ... 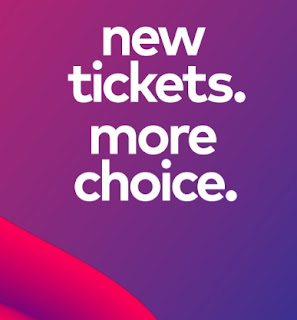 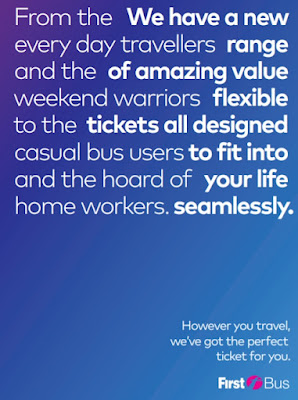 ... but "designed" and thus barely comprehensible.
There is a list of contents ... 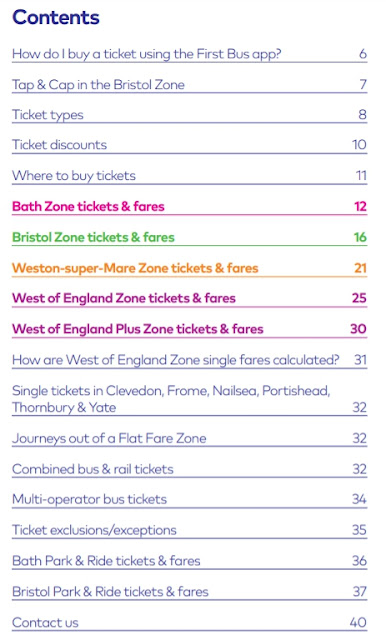 ... and, arguably, the most important of the pages so far. 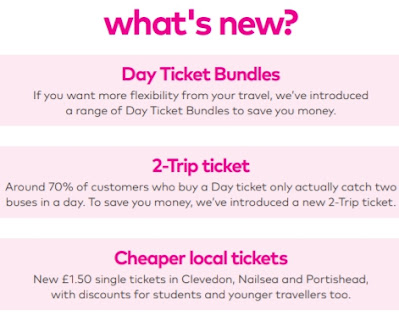 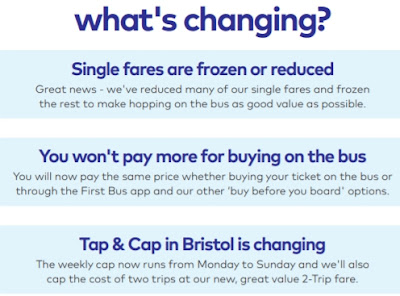 ... some changes.
Some will cynically opine that 40 pages is a huge amount to write about six small changes! Maybe it is more complex than that?
On their web site (not referring directly to the psychedelic booklet), First lists the various ticket options for their Bristol zone/area. Here they are:- 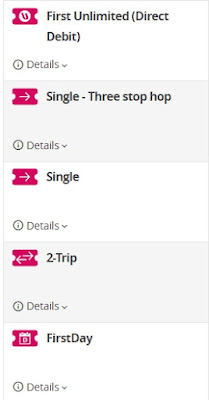 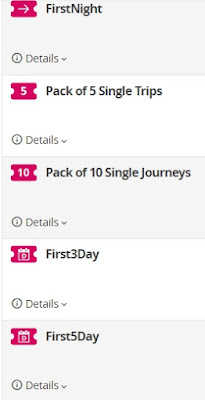 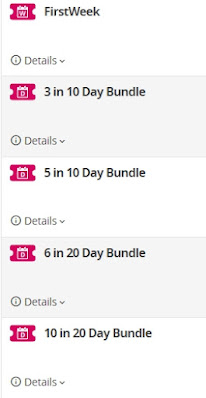 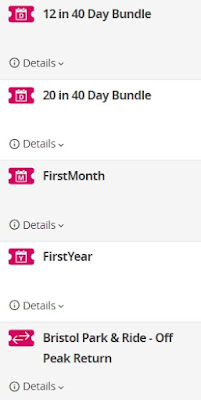 ... and that is only the adult fare types. There is a large range for students and for children.
Or we could ask a simpler question. What might a single journey cost in the First Bath, Bristol and the West Of England area?
Here is the list of these in all three categories. 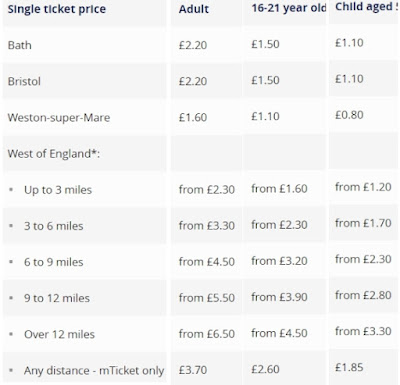 Does that mean that you can travel 12 miles with an mTicket for £3.70 instead of from (note the word "from") £6.50?
Seems unlikely.
Clearly this whole business is far from straightforward. fbb will return to the topic on Monday 28th inst. Bet you can hardly wait.
Think Of A Number ...

... which explains why today is a bit special for fbb!
It was also the only South Yorkshire bus route run jointly by THREE municipal operators.

Next Variety blog : Saturday 26th February
Posted by fatbusbloke at 02:00