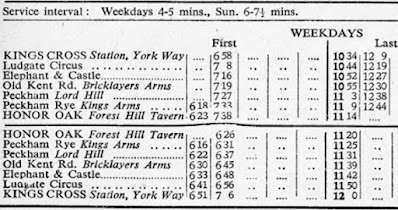 In 1934 (thanks, as ever, to Ian Armstrong's London Bus Routes site - stonkingly good!!) London Transport route 63 ran from Kings Cross to Honor Oak. In 2022 (nearly 60 years later!) Transport for London's route 63, in the process of gaining a fleet of super smashing "Future Bus" electric double deckers with posh seats and other stuff hitherto unknown in the Capital, runs from Kings Cross to Honor Oak.
Like so many traditional red bus routes, nothing much has happened to the route except a reduction ot frequency! Is this really a progressive transport operator at work?
To be fair to London Transport, the route has, for a time, been extended, first in the south to Crystl Palace ... 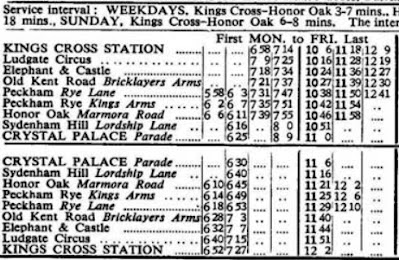 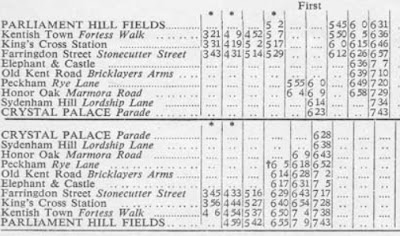 In 2003 the southern extension was incorporated into a new route 363.
Today's 63 has a modest 7/8 minute frequency (every 10 on Sundays) (click on the timetables for a larger view)...

... but supplemented by a further 6 buses an hour on the 363 which now runs between Elephant and Castle to Honor Oak then on to Crystal Palace.

So, what is so special about "Honor Oak" such that it is a significant bus terminus?
Honor Oak is named after the oak tree on One Tree Hill that Elizabeth I is reputed to have picnicked under. One Tree Hill is the central feature of Honor Oak's landscape. A legend tells that on 1 May 1602, Elizabeth I picnicked with Sir Richard Bulkeley of Beaumaris in the Lewisham area by an oak tree at the summit of a hill. The tree came to be known as the Oak of Honor. 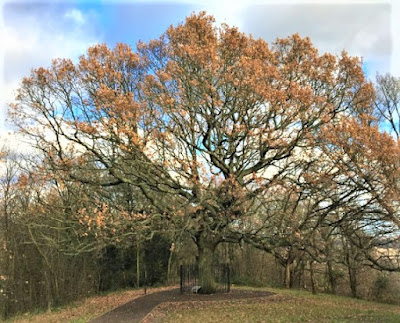 The tree surrounded by railings is an oak, and was planted in 1905 as a successor to the historic one. 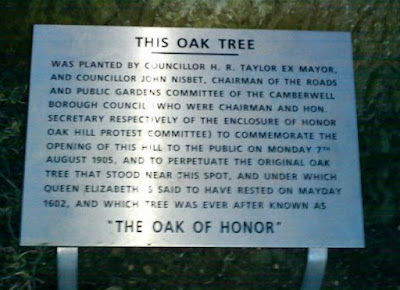 In addition to its connection with Queen Elizabeth I, the hill is reputed by a long-standing rumour to have been the site of the final defeat of Queen Boudica by the Romans in AD61, while Dick Turpin is also rumoured to have used it as a look-out post.
Well, it all makes for a nice story!
You might think that the 63 would run to a terminus at Honor Oak Park station in typical London fashion. 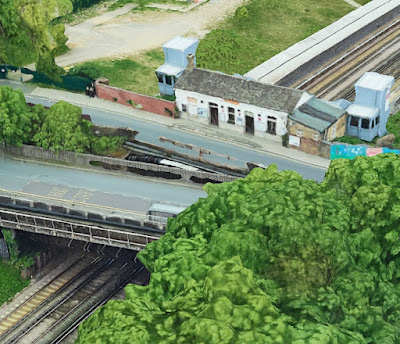 But it doesn't.
It ends a few stops short, just outside what is shown as Camberwell Old Cemetery. 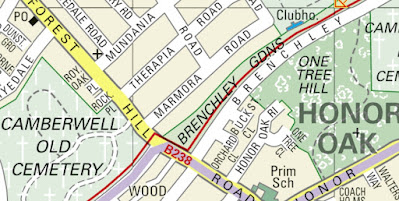 The station is a short toddle further on. 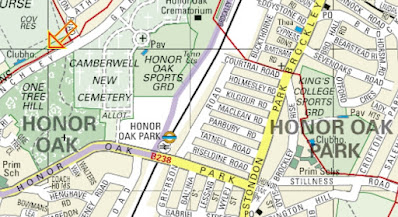 One Tree Hill (which now has a lot more than one upon its slopes!) is signposted from the Overground station. 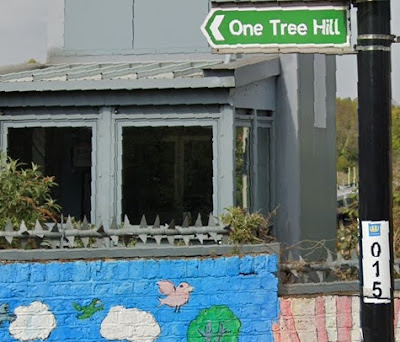 But the 63 never gets there despite a low-key local campaign. The Mayor has done his sums (busy chap, Mr Khan!)
Extending route 63 would cost approximately £450,000 per annum; with additional revenue only covering around a quarter of this cost.
This is based on using the terminus at Brockley Rise, the nearest suitable location. Parking or delivery spaces would need to be converted for bus stand use, as the existing spaces are fully used for routes 172 and P12.
While this extension would create new bus links into the station from the Peckham direction, the area around Honor Oak Park Station is already served by routes P4 and P12 - albeit not providing the link from Peckham. Overall, TfL do not consider that this would be a cost-effective use of any available subsidy.
In case you wondered (fbb did) the 363 to Crystal Palace turns off at the 63 terminus, so doesn't make it to the station. Nothing does from the Peckham direction.
So, where does the 63 turn itself round to amble back to Kings Cross?
It is VERY unusual for London - indeed for anywhere these days - because it does a U turn across a road junction. In recent times the turn has been helped by a small bus lane ... 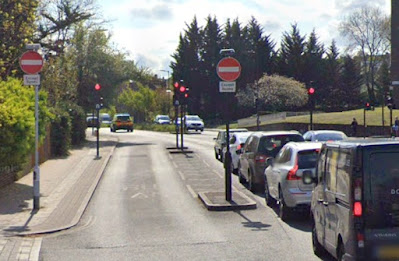 ... and a bus only traffic light giving the manoeuvre total priority at the junction ... 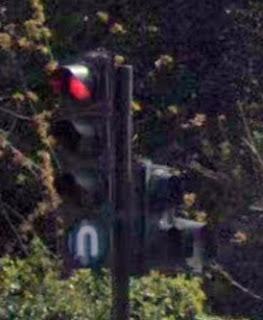 ... thus giving traffic management students a  very unusual set of lights to admire!
Having U turned buses then wait time outside the cemetery ... 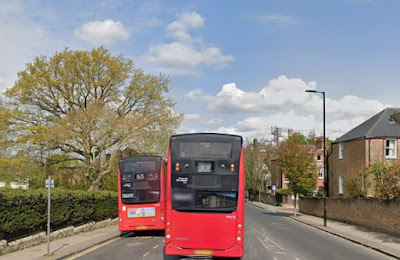 ... before moving forward to the departure stand a few yards short of what was once the Forest Hill Tavern, seen below in the 1930s.. 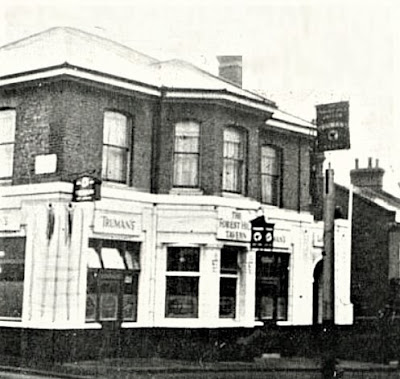 The pub remained relatively unchanged until quite recently apart from bearing a "trendy" "FHT" sign. 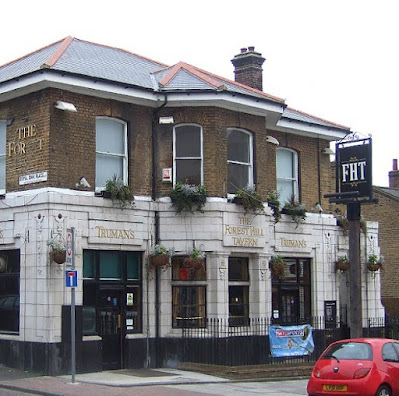 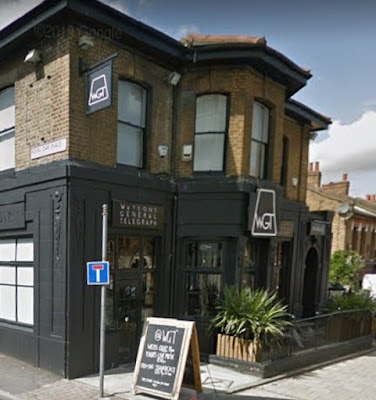 ... Watsons General Telegraph!
In 1825 Barnard Watson built the first "Electric Telegraph" which carried signals all the way from Liverpool to Holyhead ... 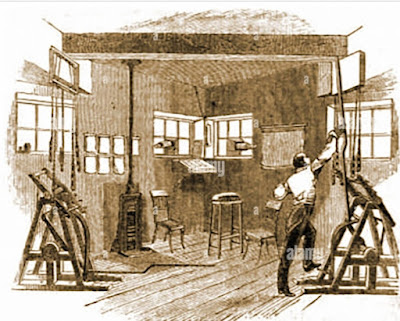 ... so, obviously, a spot-on appropriate name for a pub in Honor Oak and the No 63 bus terminus. 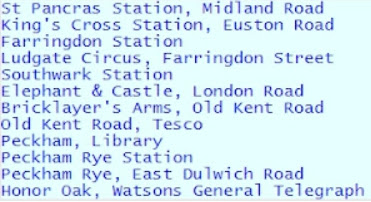 The new name is shown on Robert Munster's timetable for the 63, but Transport for London uses a boring side road (Therapia Road) to designate the stop. 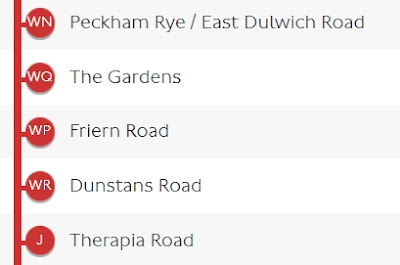 Despite it's "trendy" name, the pub still shows signs of it's original brewery owners. 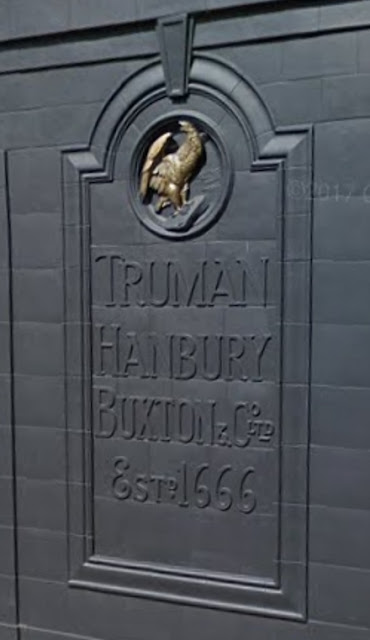 Truman's Brewery was a large East London brewery and one of the largest brewers in the world at the end of the 19th century. Founded around 1666, the Black Eagle Brewery was established on a plot of land next to what is now Brick Lane in London, E1. It grew steadily until the 18th century when, under the management of Benjamin Truman, and driven by the demand for porter, it expanded rapidly and became one of the largest brewers in London.
But, at the other end of the route, is it Kings Cross or is it St Pancras? Confused.com?
More tomorrow.
Puzzle Picture 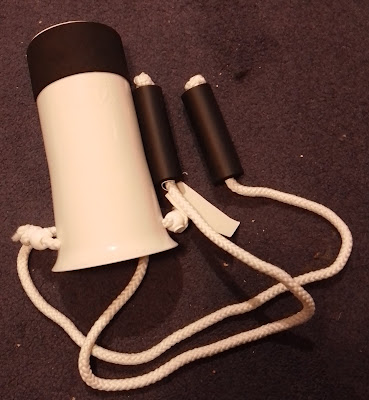 It is a splendid device that helps Mrs fbb pull on her socks, despite severe arthritis! And it saves fbb from getting told off for doing same (her socks - he can manage his, just!) clumsily and/or painfully. It works really well.
Next 63 bus blog : Wednesday 16th February
Posted by fatbusbloke at 02:00