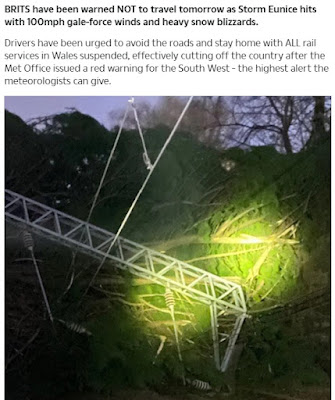 Despite fbb's "groan" headline, the weather was harsh as Eunice passed over. In sunny Seaton there was not much of a problem, although being outside was unpleasant. Our excellent butcher just up the road in Colyford, and famed for its espousal of modern technology (NOT) ... 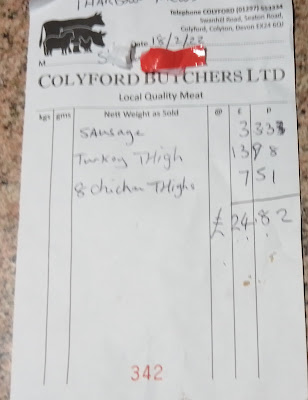 ... offered to deliver. It was a tad on the breezy side.
You do wonder, however, whether it was really necessary to close down the whole of the Wales Rails network?
But a few less well reported "happenings" (mostly courtesy of our senior IoW correspondent) serve to illustrate the nastiness, real or perceived.
1. Roof Removed!
A chunk of the roof of the Isle of Wight bus museum, formerly Southern Vectis' Ryde depot, was removed. 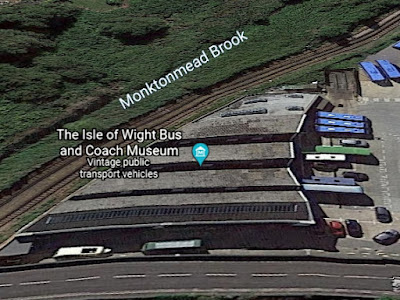 An insurance claim should solve the problem!
2. Buses Banned
Back in the day, public transport was run on the basis that folk depended on it and, if at all possible, the buses must run. Not so these days. So here is Ryde bus station ...

... with every stand full of buses not serving the public; and ... 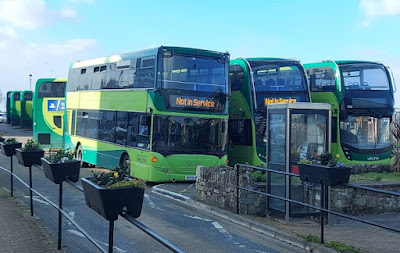 ... the layby area at the "Hovercraft footbridge" end was packed as well.
You would guess that the decision was prompted by the reported 122mph gust at The Needles. 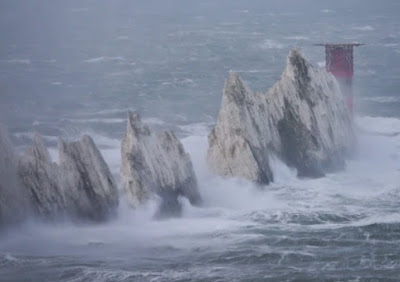 Elsewhere, and outside of the worst of the storm's path, Stagecoach ran single decks on its X17 between Matlock, Chesterfield, Sheffield and Barnsley. 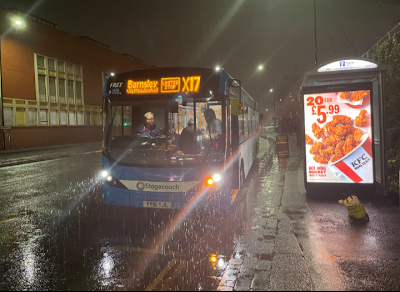 It can be a bit hairy over the top between Chesterfield and Matlock. 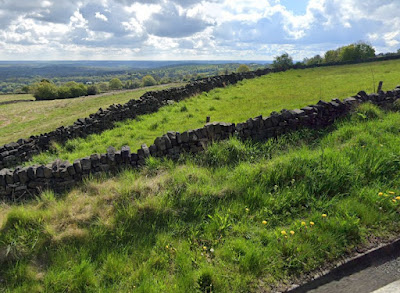 3. Ferry Flounders?
FLounder = struggle clumsily in mud or sea. Founder = to sink to the bottom. fbb has chosen the right word - panic not! By a different semantic route a "Founder" is one who starts something off, or one who casts iron in a mould, usually at a foundry. 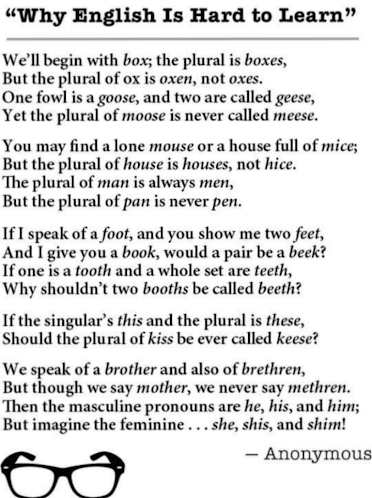 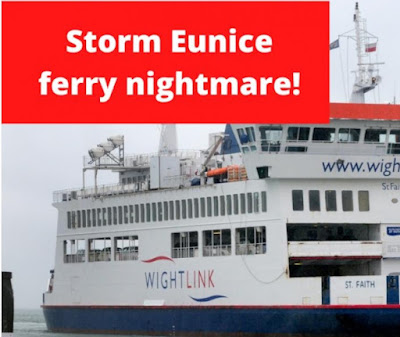 What was supposed to be a 40-minute car ferry journey turned into a four hour nightmare thanks to Storm Eunice.
The 90 passengers and 13 crew have been stranded in The Solent on Wightlink's St Faith.
There are 43 vehicles on board.
The St Faith crew have been giving refreshments to customers - for those who can still stomach them amid the conditions in the eastern Solent, force 11, gusting 12.
The ferry left Fishbourne port at 10am, on schedule.
However the Master decided not to enter Portsmouth Harbour until conditions improved.
It was at anchor mid Solent until just before 2pm, before moving towards Portsmouth Harbour. The ferry has just docked in Portsmouth, at 2pm.
An alternative version of the story reports that Portsmouth Harbour was officially closed for a while. Maybe true if this picture near the "Hot Walls" (they definitely weren't!) area of Old Portsmouth is anything to go on. 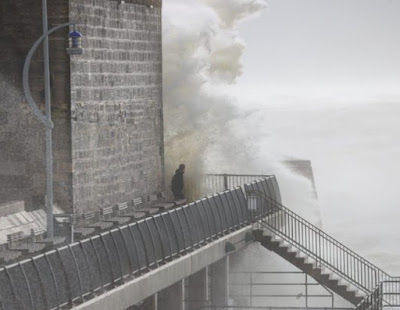 The man having a shower was well above ambient sea level! 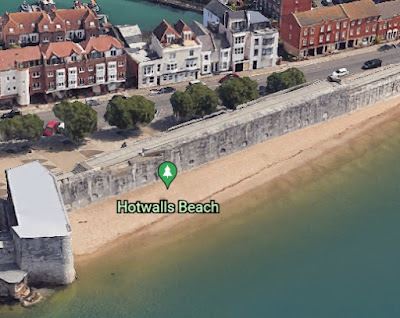 Trains Tree-Bound
Trouble on Network Southeast! Trust a railway modeller to get in on the act. The owner/operator of the "Latchmere Junction" layout is a frequent twitterer. In response to the weather he posted two appropriate pictures. 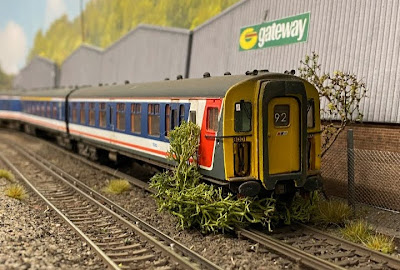 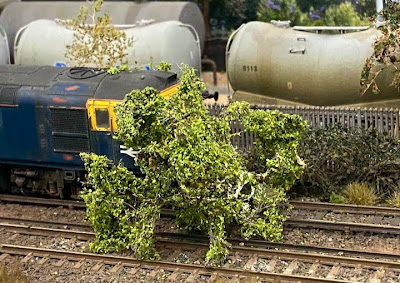 His modelling is far superior to the ham-fisted efforts of fbb - but the old man's stuff is all packed away for the winter and the bits too large to fit in the cupboard are nestling comfortably on the dining room table a k a work bench. 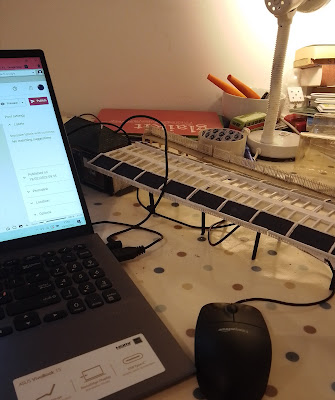 Powerful Promotional Picture ...
fbb keeps a weather eye on his in-box and enjoys exploring old railway posters. This one was of interest. 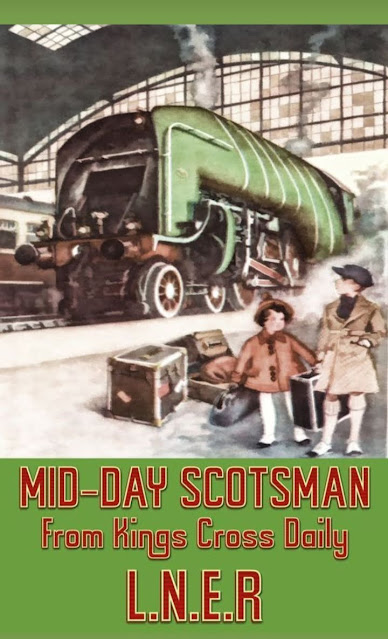 The loco is the LNER experimental beast, known as "Hush-Hush", number 10000. 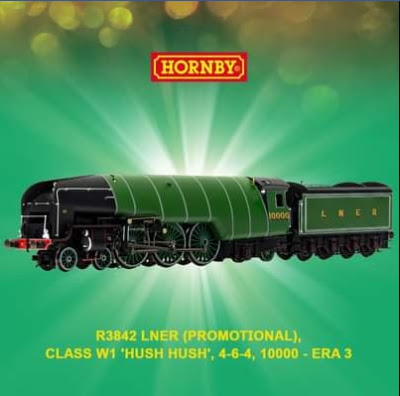 It never was painted green, although had it lasted it might have been! 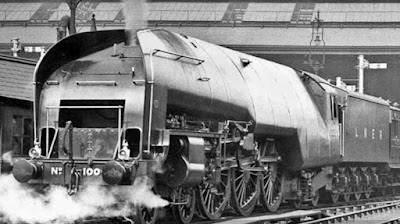 It ran in a smoke grey livery with silver lining and was never officially named. Hornby have produced models of this unique engine ...

... in never-worn green, grey with never-carried nameplate and as the correct untitled grey. These models are no doubt designed to titillate the taste buds of railway modellers and model railway collectors. At a price - around £200 and more!
The loco had a boiler based on marine practice ... 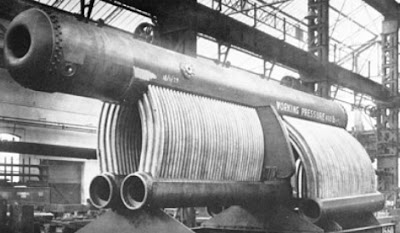 ... hence its strange shape, and technically it was a failure spending over half its short life in works being "fettled". Out of the 1,888 days since it was built, No. 10000 spent 1,105 days out of service. It was eventually rebuilt as a conventionally powered 4-6-4.

Needless to say, Hornby will happily sell you both versions of the rebuilt machine to complete your expensive collection.
If you were thinking of rushing out and buying the set (or even one), beware: some versions haver already sold out!
Emma Chissit?
The traumas of making a model railway purchase are oft reported in these blogs, not because fbb is a penny-pinching mean-streak OAP on a limited (and small!) monthly income (all absolutely correct!) but because the old man just finds the whole "game" fascinating.
Readers may remember that soon after the announcement by retailer Hattons of their "Genesis" range of  old style 4- and 6-wheel railway carriages ...... available in umpteen different liveries and, for an extra charge, with lights; Hornby announced its own range of old-style 4- and 6-wheel carriages in umpteen liveries and, for an extra charge, with lights!There is a passing similarity!
But the Hattons models have yet to appear on the market. They were "expected" towards the end of 2021 but, due to the exigencies of the situation, nowt has yet happened.
Prices seem similar, but, if anything, the Hattons models are a few quid cheaper. Here, Hattons without and with lights, side by side, to pre-order ... 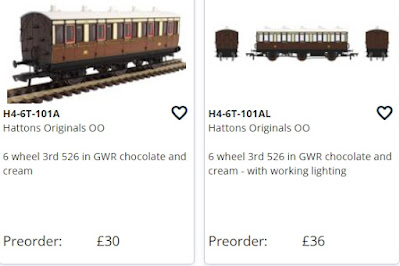 ... and Hornby, with lights available now.

Well now; the old man has a birthday coming up at the end of this week so he felt sort-of justified to buy a couple of Hornby examples. But, he cried in frustration, "Emma Chissit?" 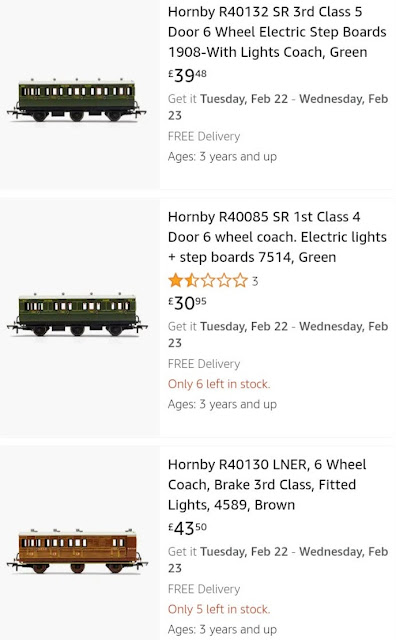 Guess which one fbb has ordered?
Wot No Scantily Clad Females? 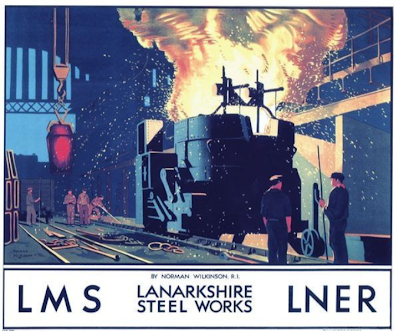 Not all railway posters were about sunny beaches and bronzed holidaymakers. 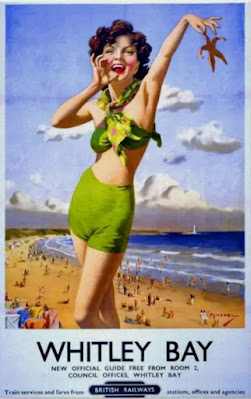 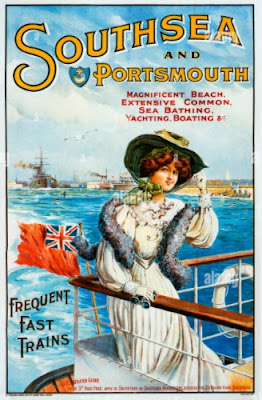 Some, like the steelworks above, were presenting the railway's essential role in the UK's heavy industry.
The artist of the above, Norman Wilkinson, specialised in marine topics and was the inventor of the "dazzle" camouflage style used during the First World War and to a lesser extent in WW2. Below he demonstrates the genre in front of one of his seascapes ... 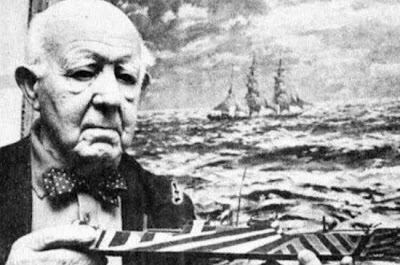 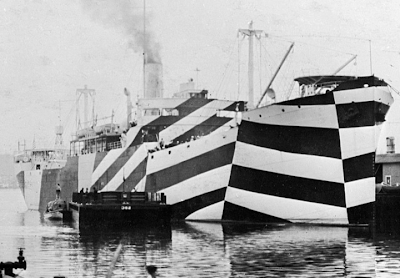 Unlike other forms of camouflage, the intention of dazzle is not to conceal but to make it difficult to estimate a target's range, speed, and heading. Norman Wilkinson explained in 1919 that he had intended dazzle primarily to mislead the enemy about a ship's course and so cause them to take up a poor firing position.
Dazzle was adopted by the Admiralty in the UK, and then by the United States Navy. Each ship's dazzle pattern was unique to avoid making classes of ships instantly recognisable to the enemy. The result was that a profusion of dazzle schemes was tried, and the evidence for their success was at best mixed.
Next Variety blog : Monday 21st February
Posted by fatbusbloke at 02:00